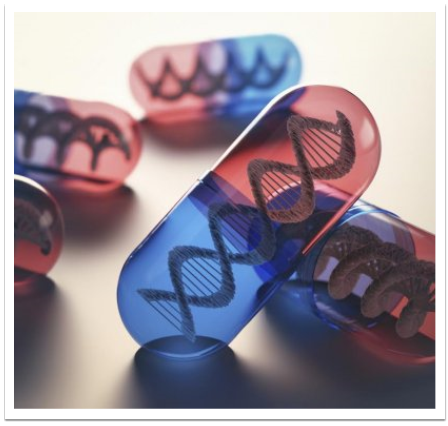 Due to rapid advances in technology, our world is slowly progressing to the point where we may surpass human limitations. This report will aim to focus on the developments of biotechnology and its importance in the achieving this ‘post-human’ state, as well as its role in reaching a hypothetical singularity. It will also follow the goals of transhumanism and the ethics related to genetic engineering. It is clear that if we are to achieve transhumanist goals, through the aid of, not just AI, but also biotechnology, life as we know will be vastly different. All research conducted for this report is secondary and data was retrieved from journals, scientific magazines and online articles[DS1].

With life becoming more and more efficient through emerging technologies, humanity is struggling to keep up with our rate of progression. Transhumanists belong to a group that believe we will one day enhance ourselves to the point of being ‘post-human’.

Transhumanism can be defined as ”the belief or theory that the human race can evolve beyond its current physical and mental limitations, especially by means of science and technology.” (Oxford Dictionary 2016). It’s a movement that believes that, through genetic engineering, nanotechnology, artificial intelligence, etc., humanity will progress to a point of surpassing human limitations such as ”death, disease and other biological frailties” (McNamee and Edwards 2006).

The three main goals of transhumanism are achieving super-longevity, super-intelligence, and super-wellbeing. These goals can be achieved through our rapid technological advancements. Super-longevity is becoming more and more likely with our ever advancing medicine and drug development. Through genetic engineering and genome editing, scientists are now able to cure what were once incurable diseases[DS2].

Transhumanists generally fall into two categories: strong and weak. Weak transhumanists believe that technology should be used to simply enhance humanity, whether that be intelligence, appearance, life span, etc. (Strong Transhumanism | Ethical Issues In Health Care 2014). Strong transhumanists on the other hand have the radical belief that technology should be used to develop humans to another species all together. The ideas advocated by weak transhumanists are already accepted by many in today’s world, and the development of drugs and nanotechnology to help solve medical issues is already seen as ethical by a majority. Strong transhumanist goals to develop a new species entirely, on the other hand, is met with accusations that it’s unethical and unlikely to happen.

Transhumanists generally discuss the concept of the singularity, which can be defined in various ways. In the mathematical world, a singularity is the point at which a function takes an infinite value. However, in regards to technological advancement, the singularity is most commonly defined as ”a hypothetical moment in time when artificial intelligence and other technologies have become so advanced that humanity undergoes a dramatic and irreversible change” (“The Best Definition Of Singularity” 2016 ).

The concept of the singularity is seen as either thrilling or daunting. Whilst techno-optimists believe it is sure to happen in the near future, those skeptical of the singularity and transhumanism believe that it is either impossible, or sure to do more harm than good. 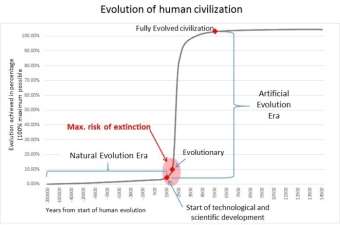 In an article on ‘The AI revolution’ (Urban, T 2015), Tim Urban discusses the concept of DPU (Die Progress Unit). He introduces it as a measure of how far into the future an individual would have to travel before they ‘die of shock’ due to the vastly developed and technologically advanced environments (relative to their time). Bringing a man from 1750 to 2016 would expose him to technology far beyond comprehensible to someone of his time, thus shocking him to the point of death. His DPU, therefore, is achieved in merely a few hundred years. However, in order for a DPU to be achieved in 1750, the person would have to travel a lot further back, to 12,000 BC. The man from 12,000 BC would then die of shock after experiencing civilisation and the more complex architecture of 1750[DS3].

As Kevin Kelly from Wired magazine stated, ”all change in the last million years will be superseded by the change in the next 5 minutes”. The article suggests that the rate of our advancements are staggering, and as much as AI plays an important role in reaching the singularity, genetic engineering methods and biotechnology have begun to make just as large an impact.

Scientists are growing increasingly worried that genome editing is moving too fast for humanity to catch up. Biotechnology plays a key role in achieving this hypothetical event that is so often discussed amongst transhumanists, and development of this technology will allow humans to alter their genome with precision and ease. The more advanced this technology becomes, the easier it will be to effectively surpass human limitations and for life to be ”transformed beyond recognition”. In order for this to be widely accepted, it will need to be used for medical purposes only.

One of the ways biotechnology is advancing our bodies and developing medical methods is through gene editing or genome editing. Gene editing can be described as the process of inserting, deleting or replacing areas of DNA within an organism’s genome. This is done using molecular enzymes that act as ‘molecular scissors’ (“Editing Our DNA With Molecular Scissors | Understanding Genetics”). This technology has incredible medical applications and may be used, in the future, to cure a vast number of diseases. Other applications of biotechnology include gene therapy and genetic screening, which both help solve medical issues.

DNA is a cell’s genetic material and consists of a sugar phosphate backbone and nitrogenous bases, and it forms a double helix structure[DS4]. These nitrogenous bases make up nucleotides which carry the genetic data (“What’s A Genome?”). These nucleotides make up what is known as the genome. An organism’s genome contains all of its genetic data thus containing all the information needed to build and maintain that organism. By finding methods and techniques to edit and change parts of our genome, we can effectively cure genetic diseases and medical problems. In 2003, a collaborative group of international scientists completed what is known as the ‘Human Genome Project’ (“What Is A Genome?”). Coordinated by the National Institutes of Health and the U.S. Department of Energy, the project sought to sequence an entire human genome. By achieving this, it paved the way for new genetic technologies and techniques to be developed[DS5]. 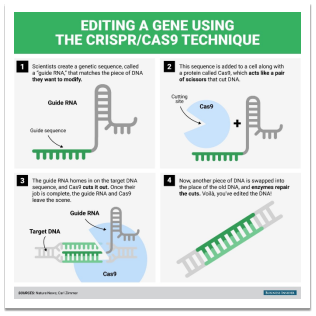 Scientists have previously struggled to find a method of genome editing that is safe for human use, however, the development of CRISPR (Clustered Regularly Interspaced Short Palindromic Repeats) has proven that it is now possible to genetically engineer our genome without damaging our DNA (Zhang, S 2015[DS6]).

CRISPR is a component of a bacteria’s immune system that recognises and remembers threatening areas of viruses (known as phages) in order to equip itself to defend against them is they were to attack again. It also involves an enzyme called Cas which then precisely cuts the virus’s DNA and prevents it from dividing. This intelligent mechanism now allows scientists to accurately and precisely edit and cut out parts of DNA. The specific enzyme used is known as Cas9, and whilst it’s responsible for snipping parts of the DNA, it works to edit the genome with CRISPR, which is a collection of DNA sequences telling Cas9 where to cut.

CRISPR is already being used as a possible treatment for eye diseases in animals and lung cancer in their first human trials (Le Page, M 2016). Scientists are using the technique to remove immune cells from the body, edit their DNA to make the better at killing cancer cells, then put them back. The rate at which gene editing is progressing is far beyond the expectations of many, and will continue to be developed at a staggering rate. As this progresses, the concept of the singularity begins to be more of a reality. Although CRISPR’s merits currently lie within its medical applications, scientists are already figuring out ways to use it to understand the human genome and molecular biology as a whole.

Another form of genome editing is TALEN (transcription activator-like effector proteins). These proteins, like CRISPR, also come from bacteria and use its adaptive immunity to edit areas of the genome. The first medical application of TALEN was on an 11-month old girl who suffered ‘acute lymphoblastic leukemia’ which is a form of cancer of white blood cells. The mechanism was used to extract T cells, genetically alter them, then insert them back into the body so they can better fight against the cancerous cells (“TALEN-Based Genome Editing | Thermo Fisher Scientific”).

Opinions on transhumanism and the use of biotechnology differ between varying groups of people. Some of the concerns regarding transhumanism and its goal of super-longevity is due to the possibility of over population. Whilst many believe that the medical applications of biotechnology and genetic engineering do well to extend our life spans and prevent us succumbing to diseases, there are some who fear that our world would not be able to withstand increasingly large populations of people. It would have social and financial implications. It is seen as unethical once the technology is no longer used solely for medical purposes, but to extend our life span in the absence of disease.

Religious groups of people also believe that transhumanism interferes too much with human nature and what God has created. If we were to use our technology to become a new species entirely, as strong transhumanists believe will happen, then it would mean religious beliefs would be compromised, therefore many are against the ideology (Messerly, J 2015).

The faster we develop biotechnology, the more efficient our methods of curing diseases become and therefore, we are able to use genetic engineering methods to achieve a longer life span. As well as achieving super-longevity, biotechnology can also aid us in developing ourselves to the point of becoming ‘post-human’, which may then lead to the singularity. Whilst these techniques and developments have positive medical applications, the rate at which we are progressing is so fast, that it’s difficult to predict the turnout of our actions and advancements. It may lead to unethical consequences and results that favour strong transhumanists, as opposed to weak transhumanists.

Thank you to Amelia and Nuffield for arranging this placement, and thank you to Dekkel and Andre for supporting and guiding us along the way, and providing up with useful resources.

[DS2]Good points, but need to be support with a reference.

[DS5]This paragraph is riddled with great points, but referencing sources will give it much more credibility