The Effects of Lithium Chloride on Locomotion and Exploration In Rats

Bipolar Disorder is a disorder with manic and depressive phases in humans. Lithium Chloride is known to affect the behavior of patients with bipolar disease by decreasing the frequency and duration of manic phases and relieving bipolar depression. Lithium’s specific mechanism of action in mood regulation is progressively being clarified. In the present experiment, we explore the mechanism with which this drug affects healthy rodents and its use in the decreasing exploratory activity and locomotion in these animals. To achieve this goal LiCl and Saline were administered in rats and their locomotion was measured. Our data showed that the rats treated with Lithium had decrease time spent in the center of an Open Field Apparatus, fewer number of lines crossed and less entries in the center of the apparatus in comparison to the control group. We conclude that further studies in the mechanism of action of Lithium Chloride are required to discover the mechanism of action of lithium in decrease of locomotion.

Lithium has been, more or less, the treatment of choice for BD for the last sixty years and recent studies show that this drug can be used for the treatment of acute manic, mixed and depressive episodes of bipolar disorder (Won et al., 2017; Ikeda et al., 2003; Alda, 2015). Despite the promising prospect of the use of Lithium in the treatment of BD the exact pathway by which this drug is using in the treatment of BD is complicated by the absence of suitable animal models (Won et al 2017). The common theme emerging from pharmaceutical and genetic studies regarding lithium’s effect on BD suggests enhancing basal and inhibiting stimulated activities (Ikeda et al 2003). After the effects of Lithium Chloride on control of bipolar disorder have been discovered Lithium Chloride has been widely researched and the effects of this drug on the behavior of patients with both acute and maintenance phases of the bipolar disease have been recorded (Alda 2015). In our experiment, we explore the possibility of reducing the BD symptoms listed above by testing Lithium Chloride’s effects on locomotion  and exploratory behavior of healthy rodents.

Human and animal behavior can be explained through Behavioral Neuroscience. The Open Field Apparatus attempts to explain the biological effects of Lithium Chloride, including locomotion and exploration, through the behavior of the rat in this apparatus. Instinctively, once the rats are placed in Open Field Apparatus, they tend to explore the new environment and try to either stay in the corners due to heightened fear after introduction to the new environment or attempt to explore the apparatus and get closer to the center of the box. The decision of exploring the environment or staying at the corners depends on the amount of fear the rat experiences which can in turn be used for quantification of locomotion in rats.

In the present study we predicted that the LiCl treated rats will experience decreased locomotion and exploratory behavior in comparison to the control group due to Lithium’s inhibitory effects.

Animals: Exploratory and locomotive responses of 12, male Sprague–Dawley rats were tested. The animals were 2-3 months old and weighed between 237.25g ± 12.4836 at the start of the experiment. All handling, housing, and surgical procedures were approved by the University of Texas Institutional Animal Care and Use Committee. Rats were housed in a 12:12 h reversed light cycle environment with ad libitum access to food and water.

Treatments (independent variable): Half of the rats (n=6) were randomly assigned to a treatment group which were administered interperitoneally (I.P.) with 2% LiCl (85mg/Kg) and the other six rats we assigned to a control group which received Saline an hour prior to their open field test. Each rat was injected at least 15 minutes apart to ensure all rats receive their injections exactly an hour before the test. Experimenters were blinded to the treatment.

Open Field Test (dependent variable): In order to measure the fear and anxiety of the rats a 4’x4’ open field test apparatus including 12 equal sized square tiles was built, and the time each rat spent in these tiles was measured. Each rat was allowed to roam in this apparatus for 8 minutes. During this test the time spent in the middle 4 tiles as well as the number of times the rats entered these tiles and number of lines crossed during exploration were recorded as measurement of locomotive behavior. Animals had to cross each tile with all four paws to be counted as crossing a line or entering a new tile. After 8 minutes the animal was removed, the cage was cleaned and same procedure was repeated with the remaining animals.

Statistical Analysis: Data is shown as Mean ± SE. Data is analyzed using student t-test. P<0.05 is considered as a statistically significant between the control and treatment groups. 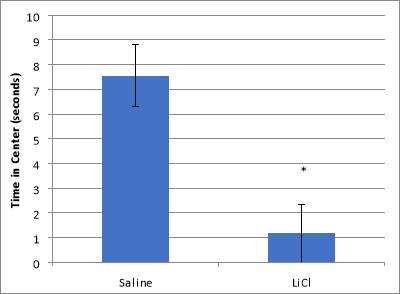 Lithium significantly reduced the time the rodents spent in the center, and number of line crossings (figure 2 and 3), suggesting decreased locomotion and exploratory behavior a finding also demonstrated by (Kelley 2007) where the aggression, super sensitivity and exploratory behavior of the rodents was reduced following injection of therapeutic dosages of Lithium. Furthermore, another study by Alda (2015) suggests that Lithium can affect regulatory networks such as GSK3, CREB and Na/K ATPase which could in turn inhibit stimulated activities, providing a possible mechanism for the reduction of locomotion in the rats as shown (figure 1) in our experiment.

The increase of fear and anxiety in rodents can heighten the locomotion and exploratory activities in these animals. A study by Khaloo (2016) investigates the effectiveness of LiCl in reducing anxiety on rats following foot shock stress, concluding increased anxiety and decreased locomotion following the shock. This study and the data from figures (1,2,3) leave room for further experimentation on future use of LiCl in BD and Anxiety related disorders.

BD affects around 2.6% of the US population, affecting approximately 5.7 million adult Americans (Tomasiewicz, 2006). Being the 6th leading cause of disability, BD results in 9.2 years reduction in life expectancy and one in five patients with bipolar disorder completes suicide. In the present study we inferred that administration of Lithium could be a useful method in decreasing locomotion and exploratory behavior and can have possible effects on fear and anxiety in rats. In the future it would be interesting to explore the effectiveness of Lithium in control of fear and anxiety and possible treatment of BD like symptoms. I would also be a subject to investigate in treating suicidal thoughts as a method to prevent or reduce suicidal thoughts and behavior.

Special thanks for advice given by Dr. Rukhsana Sultana in writing and revising this paper. Also I wish to acknowledge the assistance given by Jacqueline Newel during preparation of the Open field apparatus, injection of the test subjects and for nonstop support. Finally credits to Mohammad Jahanziri for recording and sharing data during the lab experimentation and for emotional support.