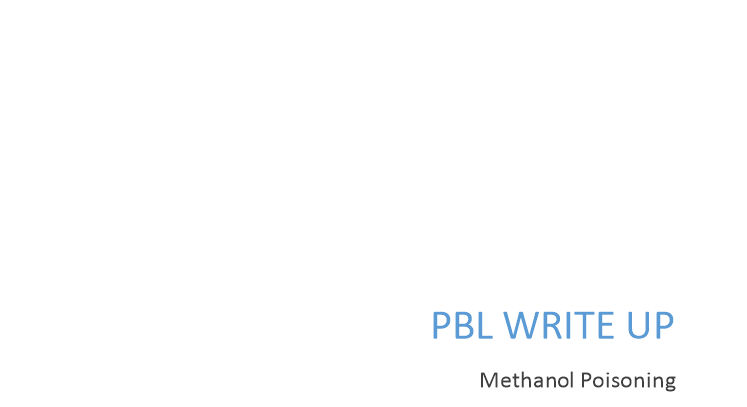 In this PBL, we observe a case of methanol poisoning in a child. We will first define the unfamiliar term of tertiary care centre and proceed to understand acid base homeostasis in the body, the basis for methanol poisoning. Then we will look at how ethanol and methanol are metabolised in the body followed by how methanol poisoning actually works. We will also discuss how the osmolal gap is obtained using osmolality and osmolarity and lastly child abuse. 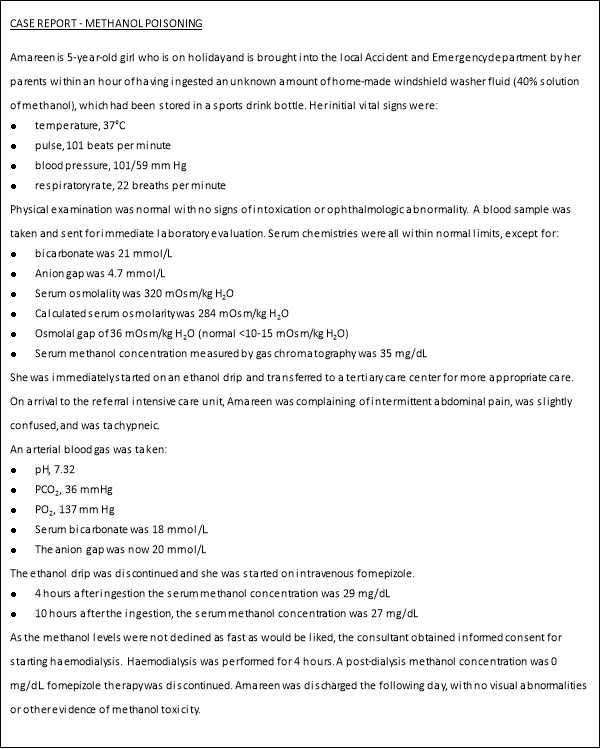 2. Overview of acid base homeostasis in the body

Acid base homeostasis is the regulation of hydrogen ions. The higher the concentration of hydrogen ions, the lower the pH and vice versa. Acidic solutions have a high pH whereas alkaline solutions have a lower pH. The normal pH in the body is in the range of 7.35-7.45. A pH lower than 7.35 results in acidosis whereas a pH higher than 7.45 results in alkalosis.

Acid base balance has its basis in the Henderson-Hasselbalch equation shown in Figure 2. If we rearrange the equation, we see that bicarbonate and carbon dioxide directly affects the acid base balance. 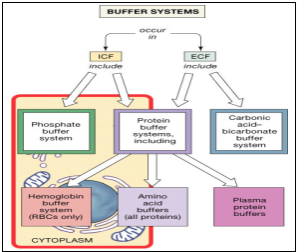 The normal arterial blood gas values for partial pressure of carbon dioxide is 35-45 mmHg/ 4.7 kPa-6.0 kPa and bicarbonate concentration is 22-26 mmol/L. A change in the partial pressure of carbon dioxide or bicarbonate concentration from normal levels results in respiratory or metabolic disorders respectively. This together with acidosis or alkalosis determined by the pH results in 4 main disorders arising. Figure 3 below shows the 4 different disorders and their respective compensatory mechanisms. 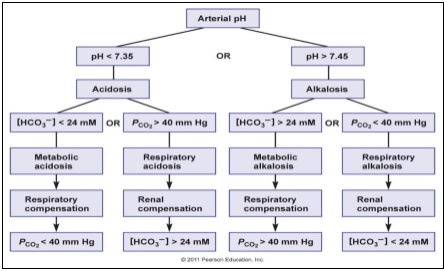 Figure 3: Diagnosis of the four main acid base disorders and respective compensation mechanisms (4).

In Amareen’s case, metabolic acidosis occurs. The major cause is the high production of formic acid which is not excreted quickly from the body. This has caused a decrease in the bicarbonate concentration due to H+ combining with bicarbonate. By the law of mass action using the Henderson- Hasselbalch equation, there is extra CO2 generated thus Amareen shows respiratory compensation via tachypneic breathing whereby the peripheral chemo receptors in the lungs are stimulated which stimulates the alveoli to try to exhale the excess CO2. The exhalation of CO2 would in most cases be enough to correct the metabolic acidosis but in this case as methanol was ingested, external treatment was mandatory to save Amareen’s life.

3. How methanol and ethanol are metabolised in the body

Ethanol, commonly known as drinking alcohol, is metabolised primarily by alcohol dehydrogenase in the liver. Once ingested, ethanol is quickly absorbed by the gastrointestinal tract and small intestines with concentrations reaching at maximum level at 20-60 minutes (5). Ethanol is metabolised to acetaldehyde by alcohol dehydrogenase and then to acetate in the mitochondria via aldehyde dehydrogenase. Acetate is then metabolised to Acetyl CoA and subsequently to CO2 and H2O by the Krebs cycle in the mitochondria. Ethanol can also be metabolised by two other pathways: by cytochrome P450 2E1 (CYP2E1) in microsomes of the endoplasmic reticulum when there is a high ethanol consumption and by catalase in peroxisomes (6). The three ways ethanol is metabolised are illustrated in Figure 4 below.

Figure 4: Oxidative pathways of ethanol metabolism in the body (7)

Methanol, commonly known as wood alcohol, can be absorbed by the body via inhalation, ingestion and skin exposure (8). In this specific case, Amareen ingests methanol. When methanol is ingested, it is quickly absorbed by the gastrointestinal tract with concentration reaching a maximum level at 30-90 minutes after ingestion (8). Methanol is primarily metabolised in the liver. In the first step, methanol is metabolised to formaldehyde by alcohol dehydrogenase. Then formaldehyde is subsequently metabolised to formic acid by formaldehyde dehydrogenase. Formic acid is finally metabolised into carbon dioxide and water in the presence of tetrahydrofolate. This final step proceeds very slowly and hence there is an accumulation of formic acid in the body which is the chief cause of methanol poisoning and will be discussed in the next section. Methanol metabolism is illustrated in Figure 5 below.

4. How does methanol poisoning work

The main characteristics of methanol poisoning are metabolic acidosis and ocular damage. Formic acid, the metabolite of methanol and not methanol itself is considered to be toxic. The severity of the toxicity correlates with the degree of metabolic acidosis rather than concentration of methanol. (10, 11) The accumulation of formic acid in the body has many detrimental effects if left untreated. The effects of methanol poisoning can be grouped into different phases (12). The phases are described in Table 1 below.

The amount of formic acid in the blood is proportional to the increase in the anion gap which measures the contribution of unmeasured anions to acidosis by using the formula [Na+] + [K+] – [Cl-] – [HCO3-] (19). A high anion gap of 20mmol/dL was observed in the arterial blood gas of Amareen when she was transferred to the tertiary care centre. A high anion gap indicates the loss of bicarbonate ions without concurrent loss in chloride ions. Thus, a low serum bicarbonate level is a reliable indicator of the severity of methanol poisoning. Other causes of a high anion gap are diabetes keto acidosis, lactic acidosis, ethylene glycol and salycilate.

Diagnosis for Amareen was relatively easy as a history was available from her parents stating that she had ingested methanol. This allowed doctors to treat Amareen quickly and correctly to prevent blindness or even death. If a history is unavailable, a test for the osmolal gap (refer to on how osmolal gap is derived) is very useful. A high osmolal gap (>10 mOsm/kg H20) indicates the presence of significant amounts of low molecular weight substances such as methanol. When methanol is metabolised, the osmolal gap returns to the normal and the anion gap increases due to formic acid formation which causes bicarbonate ions to decrease via the Henderson Hasselbach equation.

Amareen later receives fomepizole treatment after the ethanol drip was not so effective. This is a better treatment because fomepizole has an even higher affinity for alcohol dehydrogenase than methanol in the ratio of 8000:1 (21). This prevents methanol from being metabolised. The advantages of fomepizole are the ease of administration, long duration of effect and that it doesn’t cause intoxication (22). However, fomepizole is very expensive and is less widely available (23).

Due to both ethanol and fomepizole being ineffective in reducing the serum concentration of methanol in the body, haemodialysis was started. Haemodialysis is the most effective way to remove methanol and formic acid from the body (24). This works by passing blood from the body through a dialysis machine that contains a series of membranes to filter out unwanted substances and replenish essential minerals to the blood and then pumping blood back to into the body. The reason why haemodialysis was not immediately administered was probably due to it requiring a neck line which is very invasive and can result in multiple complications for Amareen who is only 5 years old.

Osmolality refers to the osmolar concentration of plasma per kilogram of solvent. Osmolality is measured using osmometers. Osmolarity on the other hand refers to the osmolar concentration of plasma per litre of solution. This value is calculated using a set formula from measured concentrations of Na+, K+, glucose and urea. The equation is 2[Na+] + 2[K+] + Glucose + Urea (all in mmol/L). Using osmolality and osmolarity, the osmolal gap can be calculated which is the difference between the actual osmolality and the calculated osmolarity which normally lies in the range of 8-10 mOsm/kg (25).

There are four main categories of child abuse (26). Physical abuse which involves bodily harm for example bruises, burns and fractures. Emotional abuse that involves persistent emotional ill-treatment or neglect causing adverse effects on the child’s emotional development. Sexual abuse by forcing a child to perform sexual activity. This includes ‘non-contact’ sexual activities such as producing child pornography. Lastly, negligence which is the failure of carers to provide the basic physical and psychological needs as well as supervision from harm to the child which results in an adverse effect on the child’s health and development. An example would be protecting a child from dangerous substances which Amareen’s parents have failed to do.