Zeolites are porous structures that have a wide variety of uses in chemistry and commercially. They can be used as ion exchangers, molecular sieves or catalysts to achieve the desired reaction or to sort molecules into size. Zeolites can be found in everyday life, be that in cars, refrigerators or in waste management and many more. The zeolite of interest is Linde-F, a zeolite that is primarily used in for the adsorption of metals, removing these metals to create more desirable products, for example the removal of lead from gasoline.

A zeolite is a mineral consisting of hydrated aluminosulphates of sodium, potassium, calcium or barium. They are commonly used as cation exchangers and molecular sieves. Zeolites can be found both naturally and formed synthetically, both types have a wide array of uses.  These uses include being in industry, consumer products and environmental uses.[1] Zeolites were originally discovered and named by Cronstedt in 1756.[2] Zeolites have porous structures that can hold most cations. The ions are loosely held and can be exchanged readily for others in a contact solution.[3]

Zeolites are a key factor in industry, for example in allowing efficient reformation of gasoline to give lead free gasoline. In refineries, heavy fractions from the crude oil fractionation are fed through fluid catalytic cracking units by using small fluidizable catalyst particles containing zeolites. This method converts higher molecular weight hydrocarbons into lighter ones. The zeolite catalysts effect the reaction by giving improved selectivity, yield durability and is lower cost compared to non-zeolite alternatives. The zeolites achieve this by giving the combinations of strong acid catalytic sites, uniformity in pore structure and stability.[5]

Zeolites are also used in consumer products such as air conditioning in cars and stationary air conditioning, their use in air-con as desiccants is to remove acid and water formed by the breakdown of refrigerant mixed fluid. This protects the system from both freezing up and corrosion, the zeolite desiccant XH7 is used for refrigerant drying. Another zeolite desiccant that became widely used was XH9 desiccants, which are also used in refrigerators, freezers and display cases.2 The use of zeolite desiccants has also been explored in the terms of space travel by NASA. In the new four bed molecular sieve that would be used in the systems, the CO2 sorbent beds would be smaller and to fully utilise the improved capacity and stronger adsorbent kinetics the 13X and LiLSX zeolites should be used.[6]

Zeolites can also be used in environmental chemistry such as radioactive waste management and used in catalytic converters to provide a site for the oxidation and reduction of toxic by-products. In radioactive waste management zeolites and molecular sieves have been used for over 25 years. Only small quantities are needed for the environmental benefits to be seen. An example of zeolite ion exchangers that were used was for the radioactive waste clean-up at Three Mile Island, a commercial nuclear fuel reprocessing site. A current use of the IONSIV IE-911 crystalline silicotitanate (CST) ion exchangers is for the cleanup of the radioactive wastes in Melton Valley tanks at Oak Ridge.1

The zeolite Linde-F can be synthesised from coal fly ash through treatment with KOH between the temperatures of 50-90oC. This zeolite has many uses, particularly in environmental chemistry. According to the parameters of avrami equation Linde-F is heterogeneous and the crystallisation is linear in growth.[7] [8] Linde-F has octagonal pores with the maximum diameter of a molecule to pass through being 5.72Å. The structure of the zeolite can be found in Figure 1 below. The chemical formula for Linde Type F is K10(Al10Si10O40).8H2O with the project aim to remove the Aluminium and incorporate transition metals like copper.

Figure 1: The zeolite framework of Linde-F both as a singular cell and as multiple connected from atop down view.[9]

What will the project study?

Currently the lifespan of zeolites is relatively short and, particularly in catalytic converters, they need to be made more efficient in their uses. The project aim is to incorporate transition metals other than aluminium into Linde-F to determine whether adding other metals will increase the lifespan of the zeolite and increase the efficiency of adsorption of chemicals. First the zeolite itself must be synthesised using the usual amounts using aluminium as the 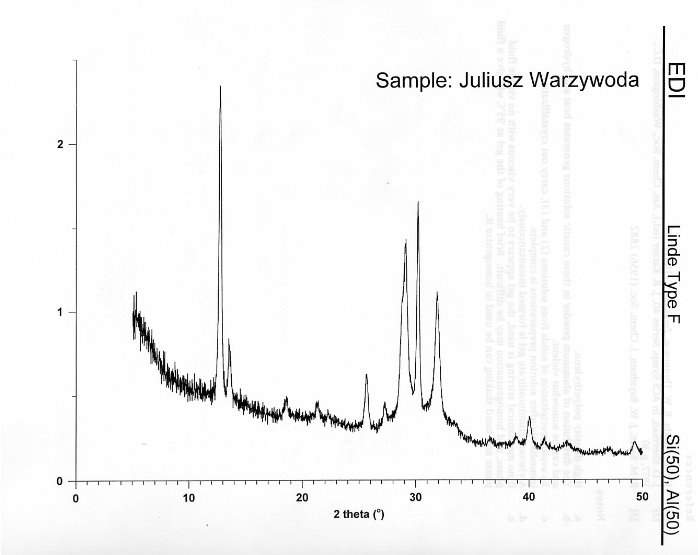 framework transition metal. Once the zeolite Linde-F is formed it will be characterised to provide a base for what is expected and to study further change when other transition metals are added into the framework. The XRD for Linde-F with no substituted transition metals can be found in Figure 2 below.

Using methods such as XRD, XRF and IR, these modified zeolites will be studied to determine if the metal has incorporated correctly and at what quantities it did so. With the pore size potentially changing with the different metal frameworks. The amount of the metal added will be adjusted to test how much of the aluminium can be replaced without harming the integrity of the framework or even if the desired metal will no longer incorporate itself into the framework after a certain amount.  The expected change for the XRD is to present a shift towards 0 on the X axis.

[5] John D. Sherman. Synthetic zeolites and other microporous oxide molecular sieves. Proceedings of the National Academy of Sciences of the United States of America 1999 Mar 30,;96(7):3471-3478.