Since Hubble discovered the Universe expansion, cosmologists had been expecting the expansion would slow down due to the attractive force of gravity. However, in 1998, two independent teams of scientists studied the distant Type I supernovae (SNe) and soon realised that SNe were moving away from us more quickly than was originally thought. This revealed that the expansion of our universe is indeed accelerating. What could be the underlying cause of this accelerated expansion? Cosmologists provoked the term ‘dark energy’ to describe this phenomenon. In order to understand what dark energy is, different approaches are being undertaken in an attempt to explain this strange phenomenon: some cosmologists predicted that there must be some kind of ‘antigravity’ effect which we haven’t yet understood; some stated our understanding of Einstein’s theory of General Relativity could be wrong and a more complete theory of gravity should be implied.

In this review paper, we start by having an overview of standard model of cosmology since it attempted to explain the current status of the universe and its evolution over time. This leads us to review of the simplest approach in dark energy—cosmological constant followed by a number of theoretical models that give different ideas towards understanding the nature of dark energy. In particular, we introduce the idea of vacuum energy and summarise Quintessence model as one of the modified gravity approach and f(R) gravity model as one of the unmodified gravity approach and their merits. Furthermore, we look at observational evidences for accelerated expansion and what they have revealed about dark energy. These include distant Type Ia supernovae, the measurements of the cosmic microwave background (CMB) and the baryon acoustic oscillations (BAO). We then describe in details of the key observational probes of dark energy such as weak gravitational lensing in addition to SNe and BAO. In the conclusion part, we address the future of dark energy by summarising couples of major projects that will be used to probe the history of the universe’s expansion, these includes Dark Energy Survey (DES) and Euclid Satellite. Finally, we come to an open discussion to remark the progress of dark energy would potentially made in the future by considering the two fundamental questions of accelerated expansion: does theory of General Relativity remain on the cosmological scale? And, is dark energy something else or none other than what we think it is?

Overall, our goal for this review is to give a broader picture on the universe’s accelerated expansion and trying to understand the mystery of dark energy from varying observational techniques.

Dark energy has been one of the biggest mysteries of the universe over ten years long and surprisingly, it counts for ~68% of the universe’s composition where ~27% belongs to a ‘missing mass’ that so-called dark matter which currently believed to be composed of completely new elementary particle. The rest 5% is something we know so far—Baryons matter, that is the ordinary matter that composed of protons, neutrons and electrons. These are all predicted within the framework of Standard model of Cosmology, also known as the Lambda Cold Dark Matter cosmological model (ΛCDM). Cosmologists have not yet come up an agreement on what the standard cosmological model is, but they have successfully used the observational pillars to propose the hypothesis of Hot Big Bang. Some key ones include: Universe’s expansion; Big Bang Nucleosynthesis; the detection of the Cosmic Microwave Background (CMB) and the formation of large-scale structure.

Recall the Doppler Effect which describes redshift z as:

where a is the scale factor whose present value is 1.

The equation tell us that if light/sound receding from us, the wavelength would stretch out and being observed with larger wavelength than the emitted one. Apply this to the distant galaxies, if the universe is expanding implying the galaxies should be moving away from us, hence we would observe the light from the galaxies become reddening. Back in 1920s, Hubble studied the distant galaxies and found that they are receding from us. Remarkably, Hubble provided the first evidence of universe’s expansion.

As Hubble Law describes: the distance between galaxies is d = ax where x is the fixed commoving distance. If there is no any commoving motion (i.e.

) and the relative velocity v is therefore given as

is called the Hubble constant. Thus, the relation suggests that velocity should increase linearly with distance. Figure 1.11 is the original Hubble Diagram that indicating this relationship. 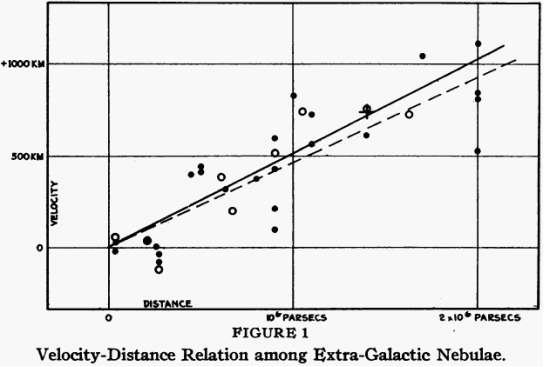 Figure 1.11 Hubble’s original diagram (1929). He plotted velocities of distant galaxies against distance and used the solid line as the best fit to the point which had been corrected for the Sun’s position.

Nowadays, we can be running reverse of this expansion and trace the history of the universe back to nearly 14 billion years ago when everything squeezed together into an extremely hot and dense state. This is where the universe began as a violent explosion and ever since then, our universe keeps cooling and expanding in a very long process.

When the universe was still very hot and dense, high energy photons would destroy any atom or nucleus leading no neutral atoms or bound nuclei exist. The production of Dark Matter is believed to occur around the time. As the universe expanded, universe’s temperature gradually decreased allowing Big Bang Nucleosynthesis take place. Light element such as helium and deuterium (a heavy isotope of hydrogen) started forming and our universe was thought to be radiation dominated at that stage.

When there was further drop down of temperature, electrons and protons are available to combine to form hydrogen atom. Since the energy density of relativistic particle decreases quickly it was overtook by that of the non-relativistic matter i.e. baryons and dark matter, the universe was entered a matter-dominated epoch.

As well as being a strong evidence of Big Bang model, CMB also plays an important role for probing the dark energy. We will spend reasonable amount of time in this review discuss more details on how CMB point to the existence of dark energy and different missions that launched to map CMB in greater details.

Several hundred million years after Big Bang, the temperature of the universe had fallen down to some extent, dust gas started collapsing under gravitational attraction, galaxies and clusters were finally formed in the matter-dominated epoch.

After all, it seems that the Hot Big Bang model has been well developed as a scientifically testable theory and the observational datasets gave us considerable confidence to see it as the most potential model to predict the history of our universe. However, there are still some difficulties with this standard cosmological model. For example, the horizon problem the flatness problem and the famous antimatter problem. In modern cosmology, both of the horizon problem and isotropy problem are explained by era of inflation which is introduced into the timeline prior to the radiation-dominated epoch of the universe. The idea of inflation was within a second right after the explosion, the universe underwent a very rapid inflation. As a result, the universe increased its size by a super huge factor and completely smoothed out, left it with our current status—homogeneity and isotropy. This is exactly what The Cosmological Principle state: the universe on large scales is homogeneous and isotropic.

To summarise the main consequences of the Big Bang model, Figure 1.12 present the overview of the history of the universe and how the dominant component of the universe change over time. 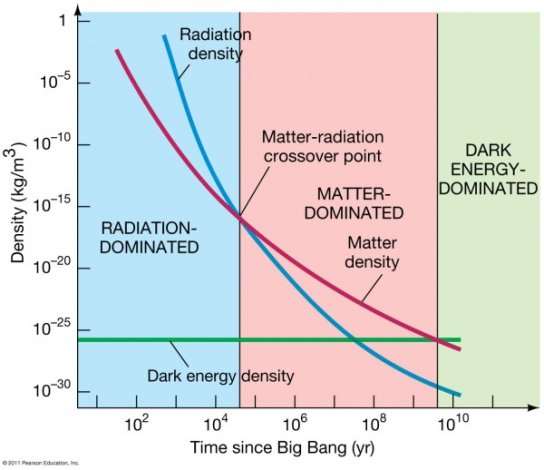 Figure 1.12 the evolution of the universe and any epoch associated with time and density. (Pearson Education 2011)

From Figure 1.12, we notice that at the earliest stage in the universe, radiation dominated, as the universe expanded and temperature dropped down, matter overtook radiation, universe was then matter dominated. At relatively recent times, radiation density and matter density have decrease so much, dark energy whole density remain relatively constant with time took over and dominated the universe. Our current era is believed to be dark energy dominated.

1.2 The Fate of the Universe

We know from the last section that the universe most probably started by Big Bang and it keep expanding ever since then. Our next question is straightforward: What will the universe end up with? This is determined by the interplay of the gravitational attraction of mass in the universe and the repulsive effect of dark energy.

Consider the universe is expanding causing the galaxies to move further away from each other. However, gravitational attraction between these galaxies works against the expansion to slow it down. Whether gravity or expansion to take over would depend on the density of the universe.

Here the critical density is defined as

The density parameter â„¦ is therefore expressed as

The fraction of the matter energy density in terms of critical density is:

Similarly, the fraction of the dark energy density in the critical density is:

Note that both of the present-day density and critical density would change with time, thus their values at the present time are used in this definition. If

(curvature term k = 0), this is a special intermediate case where the universe is thought to be flat and it will continue to expand in a slow rate under gravity, but it will never turn around; if

(curvature term k = +1), the universe will expand to its maximum size and collapse in a ‘Big Crunch’ leading to a closed universe since the gravitational gravity is stronger than weak expansion; and if

(curvature term k = -1), ) this corresponds to an open universe where the universe will expand forever because the expansion is powerful enough that gravitational attraction will never pull them together again. Figure 1.21 summarise these three possibilities of the end of our universe. 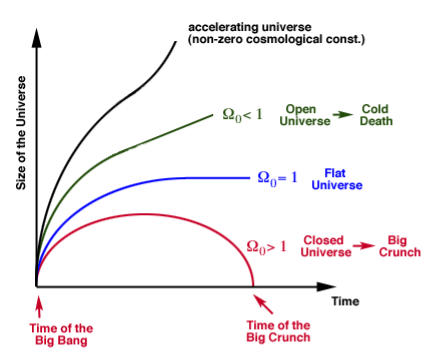 Figure 1.21 three possibilities of the fate of universe: open, close and flat universe. The line responsible for the accelerating universe will be discuss later.