Nifedipine is considered as a prototype compound of the dihydropyridine class of calcium channel antagonists. Nifedipine is a selective arterial dilator, and also is used in the treatment of hypertension, angina and cardiovascular disorders. The drawback associated with nifedipine is that it can undergo photo degradation thus escalating in loss of pharmacological activity. This process involves the reduction of the aromatic nitro group to nitroso group or the oxidation of the dihydropyridine ring to a pyridine ring. Nifedipine synthesizers make use of light resistant coating to reduce their photo degradation. It has been found out that due to poor storage conditions the clinical efficacy of nifedipine can drop drastically. In order to fix this a selection of ingredients within the dosage form can be altered or enhanced in order to minimise photosensitivity. Ion-exchange beads are solid and suitably are high molecular weight polyelectrolytes that can easily exchange their mobile ions of equal charge with neighbouring medium reversibly. The ion-exchange bead can form a complex with nifedipine and its utility used to embrace drug in light natures. Instability of the drug product may lead to a reduction in the bioavailability of the drug. It is also highly important that the patients do receive their uniform does of the drug throughout the whole of the shelf life of the product. 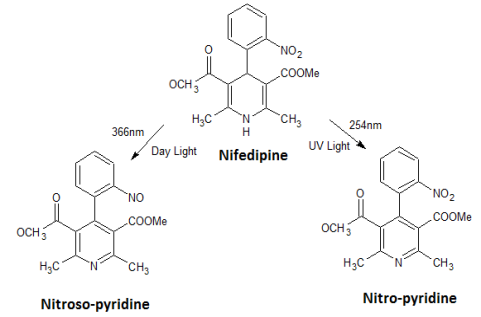 This experiment consisted of 3 main components:

20mg of nifedipine was weighed out and placed in a 100ml volumetric flask using the mobile phase to top up the flask. The resulting solutions colouration was noted and transferred to a beaker and covered with paraffin. A small insertion was made to take up 2ml of the solution into an injection using a 0.2µm filter. The time was noted and the sample was loaded and run immediately and the beaker was covered with paraffin and placed on a ledge where sunlight was present and after every 15 min intervals the sample was injected into the apparatus and it was run. After each run was carried out the peak area for each of the runs were recorded.

For stability in solid form

Determination of the stability of nifedipine solid and liquid samples with sunlight.

Table 1: Shows the nifedipine run time with 15 minute intervals, the solid form and a UV sample.

The illustrations below show the HPLC peaks at various time intervals with their retention times, peak area and heights. 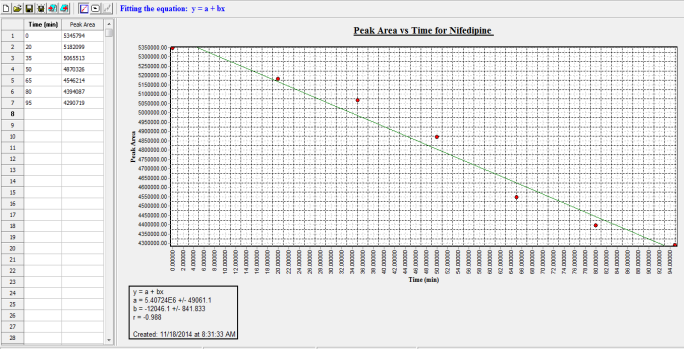 From the graph using the equation: y = a + bx

The half-life of nifedipine was found using the equation:

As we were dealing with zero order kinetics so, r = k

According to the data gathered it is seen that the solid sample of nifedipine resembles to the first T0 liquid sample. By this observation a person can say that the solid state sample did not show any signs of degradation after the 2 hour window. The colour of the liquid samples were changing from yellow at T0 to faint yellow at T80. On the other hand for the solid sample from the light yellow powder after the 2 hour window a layer of dark yellow powder was seen and the powder was mixed around and it was seen the underlying solid particles still retained the same colour of light yellow. According to the UV data at T0 and Æ›max of 334 it generated an absorbance of 0.604. Whereas for the T100 with a Æ›max of 279 generated an absorbance of 1.064.

The solid sample of nifedipine after being expose to 2 hours of Irish sunlight visual observation showed a darker colour change from light yellow to a darker but when the powder was mixed the underlying layer was of the same light colouration as it started with. And after the 2 hours window the HPLC result showed no degradation at all. This could be due to the practical being carried out in doors and the lack of the photons getting to the solid sample.

On the other hand in the liquid sample things were not much better from a yellow solution starting at T0 – T80 there was no colour change but after performing the next HPLC the colour had gone faint yellow. If the apparatus would have been given 45 minute more the results attained would be of first order kinetics. As it stands it is zero order kinetics.

Manufacturers of nifedipine products use light resistant coating or packing to minimize their photodegradation. Long term exposure to sunlight or artificial light may also occur if nifedipine formulations are inappropriately stored by patients. Poor storage conditions may potentially decrease clinical efficacy of nifedipine.

“Validation of an analytical method is the process that establishes by laboratory studies, that the performance characteristics of the method meet the requirements for the intended analytical applications.”

The typical analytical characteristics used in method validation vary but the relevant one for this experiment is stability, system suitability and system sensitivity.

“Prepared sample/ standard stability is defined as the ability of the analyte to remain stable in the diluent at the test concentration specified in the analytical method.”

System suitability testing is an integral part of many analytical procedures. The tests are based on the concept that the samples to be analysed constitute an integral system that can be evaluated as such. System suitability is determined by various methods. Any one or a combination of the following may be written into the method as necessary for using the method for routine post validation:

Resolution ensures that closely eluting compounds are resolved from each other and establishes the resolving power of the system. It contains as close as is possible to a complete sample matrix.