Zinc oxide films with and without barium-doping have been prepared by the SILAR technique with different percentages (1 M%, 3 M%, 5 M% and 7 M%) of Ba content on microscopic glass slides. The effects of the concentration of barium doped on zinc oxide (BaZO) were characterized by X-ray diffraction (XRD), UV-Vis Spectroscopy, Scanning Electron Microscopy (SEM) and Energy Dispersive X ray (EDX).The XRD studies confirmed that the structural growth of ZnO films were polycrystalline in nature. The Ba doped ZnO films deposited were found to have strong orientation at (002) lattice plane which exhibited polycrystalline hexagonal wurtzite structure. The SEM showed that the grain size, thus the roughness, increased as a result of increase in the level of barium doping. Optical bandgaps obtained decreased from 3.41 eV to 3.19 eV with an increase in Ba concentration.

For many years, the synthesis and characterization of ZnO thin films have been an interesting area of research. The wurtzite structure of ZnO forms an n-type semiconductor with direct band gap

In recent work, an attempt has been made to synthesize Ba doped ZnO thin ﬁlms by SILAR technique, since it involves adsorption of a layer of complex ion on the substrate after that reaction of the adsorbed ion layer [23]. Ba doped ZnO is an important technological material used for example in varistors and liquid sensors’ guiding layers[24]. Precisely, doping ZnO with Ba procures to ZnO films a rougher surface, a stronger internal stress, and a low density crystalline structure [25].This paper investigates the effect of varying percentage of barium (Ba) as a dopant on zinc oxide (ZnO) thin films synthesized by SILAR method with ZnSO4.2H2O and BaCl2 as precursor and dopant materials respectively.

The un-doped ZnO film was deposited as stated below: Firstly, 0.8M concentration of hydrated zinc sulphate (ZnSO4.2H2O) was prepared with aqueous ammonia (NH4­­OH, 29%) and 50ml distilled water. The aqueous solution was then stirred thoroughly by mixing it with a magnetic stirrer for about 20 minutes for it to dissolve completely to produce a colourless aqueous solution of [Zn(NH3)4]2+ (Zinc(II) tetra-amine ion) cationic precursor. The aqueous ammonia added to the resultant mixture helps to modify the pH solution to 8.1. For the growth of ZnO (intrinsic semiconductor) films, 40 cycles were carried out in each case.

Secondly, in case of Ba doped ZnO (BaZO) (extrinsic semiconductor) thin films, a measured amount of barium chloride (Bacl2) were added to the initial solution in separate beakers. In order to determine the effect of varying percentages of barium (Ba) as a dopant on ZnO thin films, we conducted the experiments at five different concentrations. Ba2+ ions were added to the deposition beakers at1 M%, 3 M%, 5 M% and 7 M%. Water bath was used as an anionic precursor in order to reduce temperature fluctuation.

The summary of the procedure for depositing ZnO films at 40 cycles are shown below: 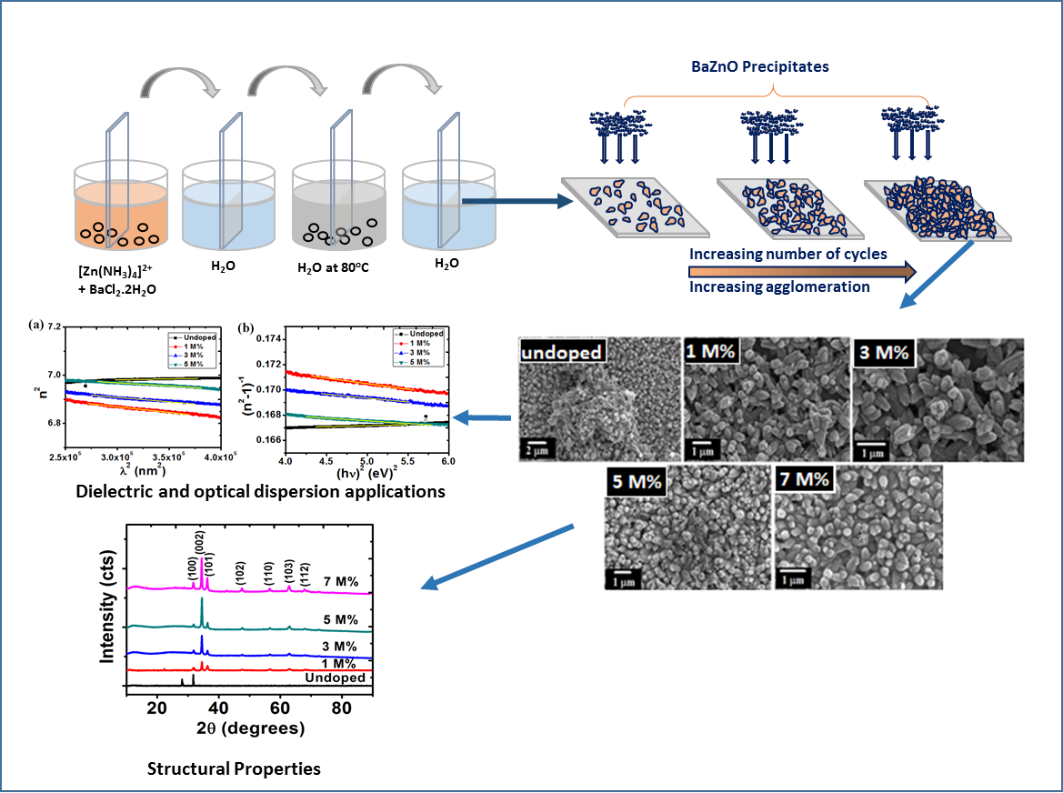 From equations (1) – (5), it exemplifies a chemical reaction connected with both un-doped and doped process:

It was deduced from the process of the anionic reaction, complex aqueous solution of zinc (II) tetra-amine ions, broke up with Zn(OH)2 precipitation:

SEM, XRD, UV-Vis and EDX analysis were performed in order to figure out the morphological, structural, optical analysis and elemental compositions of ZnO films. Crystal structures of the films were ascertained by an XRD over the range of 2

o. The optical analysis of the films was determined by UV-Vis spectrophotometer at room temperature over the range of 200 – 1000nm.

3. Results of the experiment and discussion

Diffractograms indicated that barium doped ZnO (BaZO) films were only incorporated in the lattice plane of ZnO. For Ba-doped ZnO (BaZO) (extrinsic semiconductor) films, prominent peaks were showed at 2 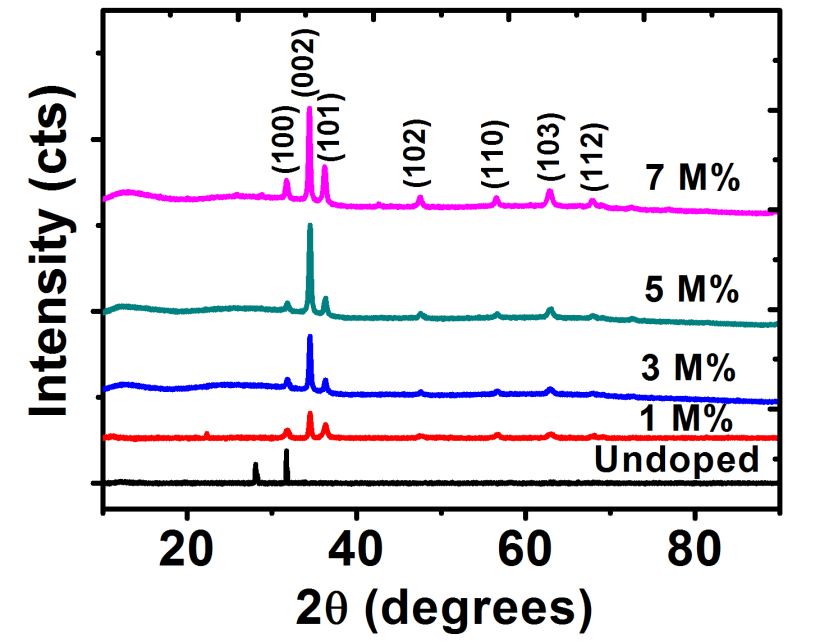 Figure 2: The XRD pattern for undopedZnO and Ba doped ZnO .

Where λ, θ andβ are the wavelength, Bragg’s diffraction angle andfull width at half maximum,respectively.The un-doped crystallites presented a much higher size than those of the Ba-doped samples. The crystallite sizes of the ZnO at different dopant concentration ranged from 30.4 to 33.6 nm. However, there is no clear trend observed as the concentration increases.

The inter-planar distance, d, which is the vertical spacing between parallel atomic planes in a crystal was calculated using equation (7)[29].

The lattice strain, ε, which is as a result of distortion and inhomogeneity was calculated using the equation (8)[30].

There was a sharp decrease in crystallite sizes from 82.22 nm for undopedZnO to 30.43 nm for Ba doped ZnO at 1 M%. However, there is no evidence that an increase in the dopant concentration increased or decreased the crystallite sizes as no such trend is observed.

These micrographs showed that the surfaces of BaZO films improved by doping process. A change in the grain size due to varying percentages of dopant was noticed. Fig 3(a) shows an arrangement of highly dense and agglomerated undoped ZnO in budlike form. Introduction of Ba dopant in smaller concentrations (1-3 M%) produced more evenly dispersed nanostructures with no change in the budlike shape. Further increase in the concentration (5-7 M%) revealed the formation of nanorods.

The number of cycles play a huge role in the agglomeration of the nanoparticles. As illustrated in figure 4 at lower deposition cycles, the sparsely distributed nanostructures will be formed. Increasing the number of cycles results in more densely packed nanostructure while increasing the film thickness. In our case, 40 cycles produce highly agglomerated nanoparticles irrespective if the dopant concentration. 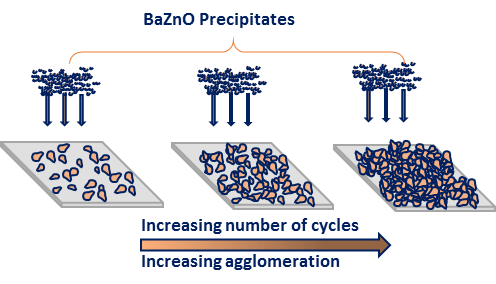 The compositions of the elements of ZnO films were studied using EDX as shown in figure5. For all doped samples, peaks of oxygen (O), calcium (Ca), barium (Ba) and silicon (Si) exhibit the presence of these elements in the deposited thin films. Also for all samples, zinc element has a higher ratio when compared to oxygen (O) element. The peaks of silicon originated from the glass substrate. The EDX pattern confirmed Zn and O and hence ZnO deposited. Apart from the key elemental composition, the appearance of other elements such as silicon Si, C, and Ca, on the EDX pattern is as a result of glass substrates used during deposition period contained silicon (Si) which belongs in the same group with carbon (C) in the periodic table and barium (Ba) used as a dopant and it belongs to the same group with calcium (Ca) in the periodic table. 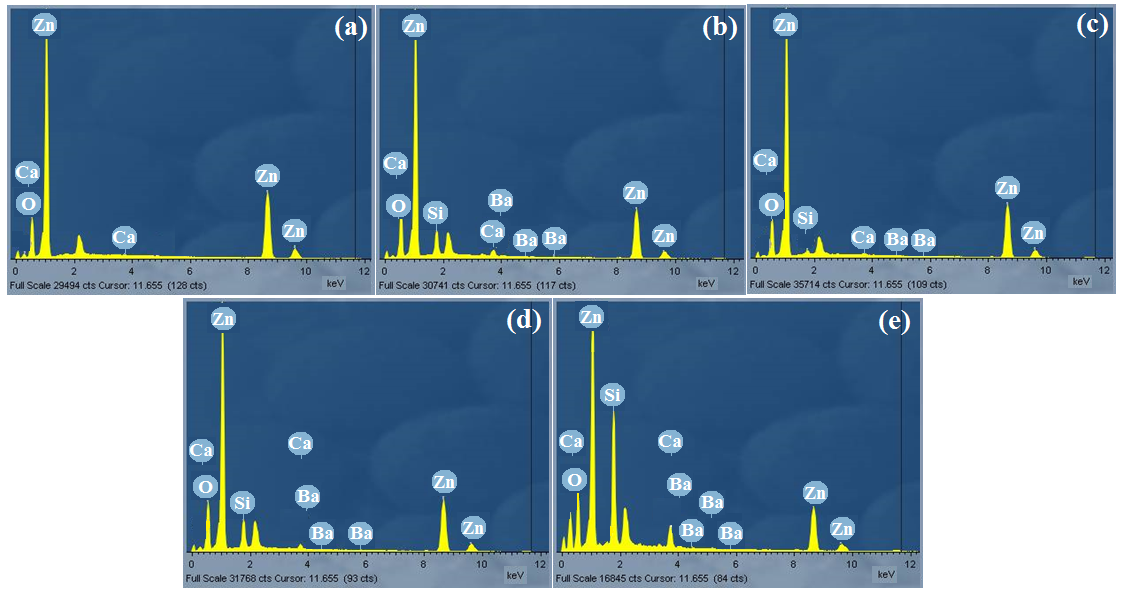 The undopedZnO thin film has the highest band gap when compared with those of 1 M%, 3 M%, 5 M% and 7 M% doped as shown in fig. 6 (a-e). As represented in fig. 6(f), the values of band gaps of ZnO film decreased with increase in percentages of doping. This decrease in band gap can be used to improve the visible light capturing in solar cell applications[32]. 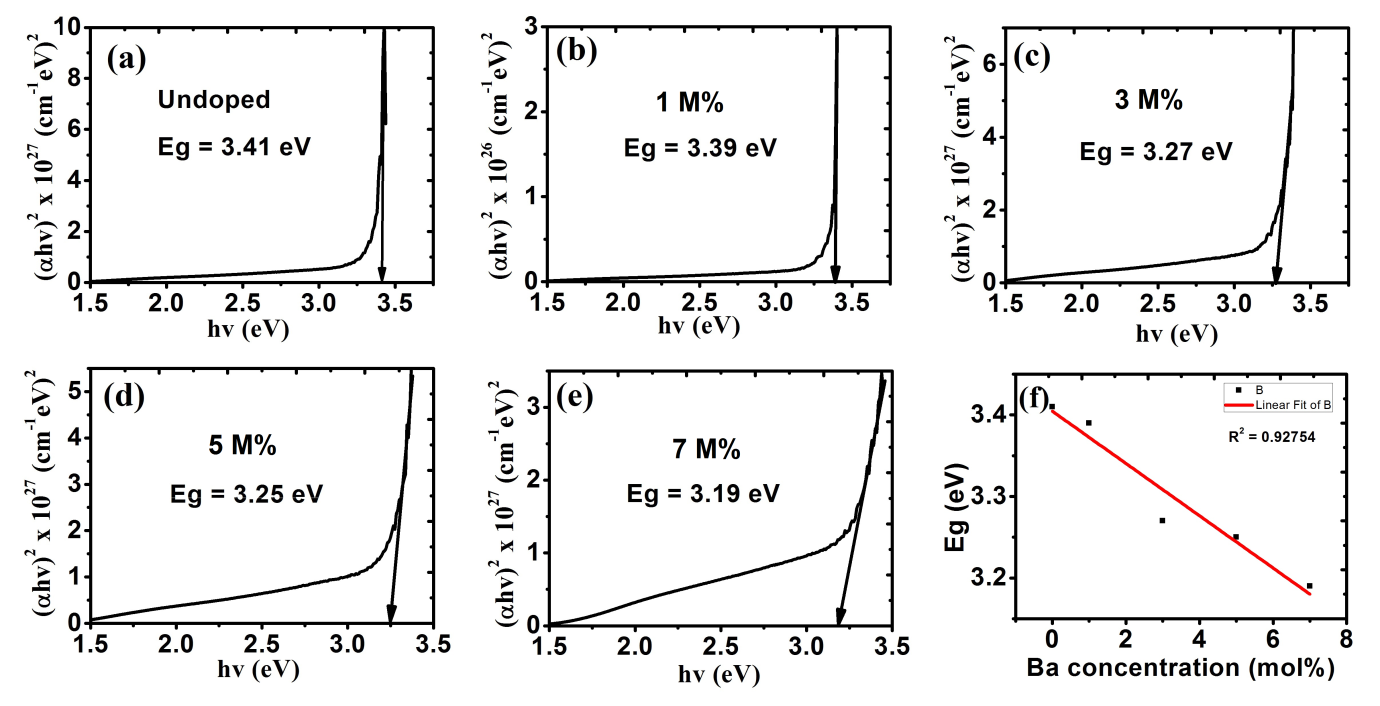 (f) Shows a plot of the decreasing bandgap with increased Ba concentration. 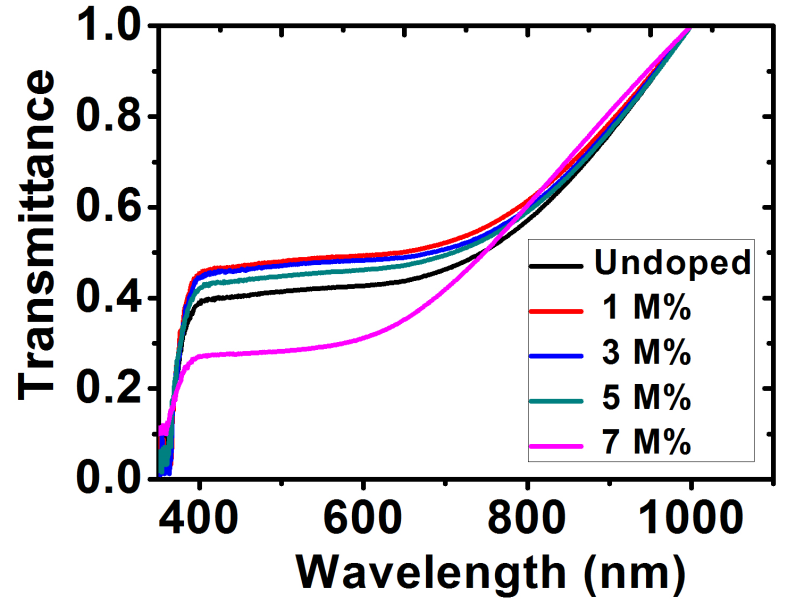 The optical absorbance was recorded by using a single beam spectrophotometer from the wavelength range 350 nm to1000 nm shown in fig. 9(a). From the graph, it is observed that absorption spectrum of ZnO thin films decreases as wavelength increased. The absorbance values were calculated with wavelengths in the range of 390 nm to1000nm in the visible region. The results show that 7 M% Ba doped ZnO has the highest absorbance in the visible light region. Figure 9(b) shows a plot of absorption coefficient (α) versus wavelength. It can be calculated from expression [36]:

A represent the absorbance and t represent the thickness. From the graph, it is observed that the absorption coefficient decreased with increase in wavelength (380 nm to 1000 nm) in the visible region.

Fig. 9: (a) Absorbance; (b) Absorption coefficient for ZnO and Ba doped ZnO films.

Fig. 10 (a) shows optical reflectance spectra of different samples of ZnO thin films. It is observed that the reflectance of all the deposited thin films is low. The lowest reflectance in the visible light region was observed at the highest Ba concentration (7 M%). This low reflectance value makes ZnO thin film is an important material for anti-reflection coating.

Fig. 10: (a) Reflectance; (b) Optical Conductivity for ZnO and Ba doped ZnO films.

The oscillation energy Eo and dispersion energy Ed were obtained using the Wemple and Di Domenico model [39] in equation (12).

in figure 11(b) produces a slope and intercept of

, respectively, from which Ed and Eo were easily calculated and values represented in Table 2. Both the oscillation energy and the dispersion energy decreased with increased concentration. This is in contradiction with [38] which attributes the decrease in Eo to a decrease in energy band gap Eg.

Table 2: Summary of the optical constants and dispersion parameters of ZnO and Ba doped               ZnO at different molar concentrations.

Undoped and Ba doped ZnO thin films with different percentages (1 M%, 3 M%, 5 M% and 7 M%) of Ba content have been successfully synthesized by SILAR technique on glass substrates. The XRD studies confirmed the growth of ZnO thin films with polycrystalline hexagonal wurtzite structure with a preferential orientation of (002) plane for all samples.

The SEM imagesindicated that the grain size, thus the roughness, increasedin proportion with Ba doping level. Optical analysis showed that an optical band gap of ZnO films (undoped and doped) reduced from 3.41eV to 3.19 eV with increased Ba dopant concentration. An increase in Ba concentration led to a decrease in the plasma frequency while there was a decrease in both the oscillator energy and the dispersive energy. In summary, this study reveals the tunability of the optical parameters on ZnO by varying the barium dopant concentration.