Plankton can be considered all organisms that come with ocean currents. This does not necessarily mean that all don’t have movement. Many of them have the ability to move, but can’t overcome the chains, and because of that they only has vertical movements and don’t define its horizontal position in the ocean. Plankton can be plants or animals and it has an important role in the fish food chain and other sea life, and also for human beings.

The plankton organisms are very important because they are the base of marine food chain, and also because phytoplankton is the largest source of oxygen to the atmosphere, to the photosynthesis.

These organisms have different sizes: from 2 microns (protozoa) to a few meters (some species of jellyfish), and are distributed from the surface to deep water.

Importance of the Plankton Plankton is very important for life on Earth. Phytoplankton produces much of oxygen that people and other animals need to survive. Plankton is also a big source of food. Zooplankton feed on the phytoplankton. Fish and other large animal, feeds the zooplankton. As an example we have the whales, which keep the plankton through their filters, present in their mouths.

Plankton doesn’t have the ability to overcome the ocean current. This is why the plankton is a group of extremely vulnerable to marine pollution organisms, since they can’t move to a location with better environmental conditions. Thus, some plankton organisms are important indicators of environmental quality of the marine regions.

1) Phytoplankton > is Plankton formed from plants. These organisms are often not the size of a cell. A diatom, for example, which is a type of unicellular algae, is a common form of phytoplankton. The plants belonging to the plankton occupy the upper layers of the ocean because of light presence and then perform photosynthesis to produce energy and release oxygen gas.

Different from most land plants, phytoplankton does not need roots, stems or leaves, because they can absorb water and nutrients directly from their environment.

2) Zooplankton > is Plankton formed from animal organisms. Some of these organisms are very small, as crustaceans’ miniature and protozoa. Others, such as jellyfish, are larger. Some fish and shellfish, early in his life, are eggs or small larvae. These eggs and larvae are also zooplankton. In the phytoplankton and zooplankton, bacteria and fungi float on the waters of the planet. These bodies can also be considered plankton.

The ocean currents are water flows that occur in the oceans and regulate the climate. Some streams are perennial, or is always flowing in a given direction at a given point. Ocean currents have their origin in the movement of winds at the surface and by the movement of Earth’s rotation. It starts in the tropics and at high latitudes and circulates oceans and seas carrying large bodies of water and debris, affecting marine life.

They are divided into cold and warm currents, and have particular characteristics, such as temperature, salinity, color, density and marine life. The warm currents originate in the Intertropical Zone, leave the tropics toward the Polar Regions, while the cold currents, originate in the Polar Regions, and move in the opposite direction, towards the Equatorial Zones. An example is the Humboldt Current, which reaches the coast of Chile, creating a marked aridity in the region, and interferes with the fishing activity.

They carry with them moisture and heat also interfering in marine life and, consequently, having a direct influence on the balance of the oceans and seas. It is considered the most important and enigmatic phenomena of the oceans due to its influence on climate regions and also for holding an important transportation work and spread of plant and animal species.

The formation of ocean currents is because of the union of some factors of nature, such as difference density of water, by the difference in temperature and salinity. The currents tend to move the higher density areas to low density areas; action of the winds and movement of the Earth’s rotation (mainly influences towards some currents).

Ocean currents can influence the climate, for example, contribute to the formation of deserts, such as the Humboldt Current with the Atacama Desert and the Benguela current with the desert of Namibia and Kalahari . From a biological point of view, the currents contribute to the spread of animal and plant species by the various areas through which they pass. The Humboldt Current, for example, contributes to the coast of Peru and Chile be one of the richest areas in the world of fish, due to the large amount of marine plankton that it transports.

Ocean currents can be classified according to the temperature of where form in: warm currents are formed in the equatorial zones (current of Guinas, the Gulf of Mexico, Brazil and the South Equatorial); cold currents that form in the polar regions (current Labrador, Humbolt, the Falklands, Bengal and the Antarctic Circumpolar). 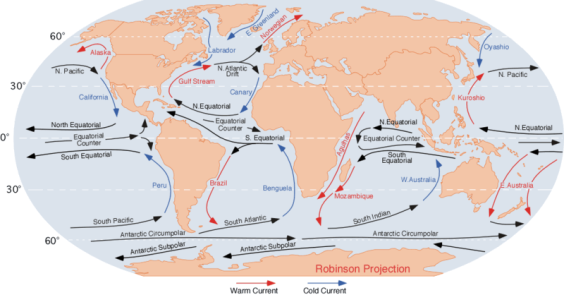 North America The Labrador Current (cold) influences the temperature of the northeast coast of North America, making the climate of that region presents very low temperatures, causing the freezing of waters in the port of New York.

The Gulf Stream (hot) originates in the West Indies; lard much of the east coast of North America, warming the climate in the Gulf of Mexico. By having hot water favors the evaporation contributing to increased rainfall in the Gulf region.

South America South America also receives influence of ocean currents as the Humboldt Current (cold), also known as the Peru Current. This ocean current rises near Antarctica therefore carries the cold temperatures of the area where it originates. The low temperature of the Humboldt Current prevents evaporation, leaving the relative humidity of air low, causing the formation of a mass of dry air, contributing to formation of the dry climate of Chile’s Atacama Desert to Peru.

Ocean currents also influence the economy of many countries.

Relation between Plankton and Ocean Currents

The meaning of Plankton in Greek refers exactly to what it is: a wandering, or specie that don’t have root and move to a place to another one. The Ocean Currents influences this movement transforming regions on rich environment and others on poor environment, as it takes nutrients to one place to another.

By this movement it is possible to determine if the water portion is rich in nutrients or not, depending on the plankton find on it.

As always, humans are requested to rethink their activities and what they are doing to preserve the environment. Sometimes a region is poor in plankton simply because the water doesn’t have quality.

In the past, human thinks that nature will last forever, but nowadays they realize that nature is giving its answers… we can see this by nature catastrophes seeing all long the world.

We need to preserve the nature for the future generation, and as a Blue Planet, water is our main resource that needed to be conserved.