Red meat as a source of protein 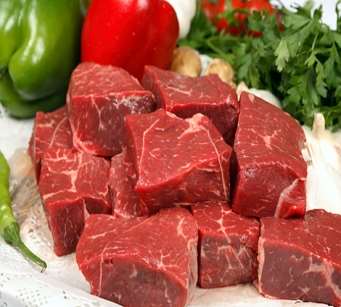 Meat and processed meat products are a vital source of protein, lipids and other nutritionally important functional constituents which are essential components in a human diet. The two main categories of meat are red and white meat. As per nutritional concepts, the red meat is referred to as the one which is reddish in appearance in raw state and has an elevated myoglobin content in it. Red meat category which is highly consumed by humans include beef, lamb, pork and processed meat products. White meat is the one with a pale appearance and mainly includes poultry, veal and rabbit.

Protein are macromolecules which are composed of long chains of amino acids and are referred to as the building block of the body as it is present in every single cell in the human body. It is vital to include protein containing food in the diet as it essential for major functions include growth and repair and is a major energy source of the body. Among the different food stuffs meat and meat products supplies the necessary protein in human diet. Protein is present in both the vegetarian and non-vegetarian food. As per the New Zealand nutrition foundation animal food as well as plant sources such as soya and quinoa supplies the essential amino acids which are important for the body functions. This essay specifically focusses on analysing the importance of “Red meat as a source of protein”.

A critical analysis on the nutritional composition of any food is essential for any study on human nutrition. Meat has become an integral part of human diet. Meat is a complex structured food which includes components of biological value such as micronutrients (minerals and vitamins), proteins, fats and low level of carbohydrates. As Per the Food Standards Australia New Zealand the meat includes the flesh with skeletal muscle and fat as well as offal which include the internal organs of the animal. Meat comprises about 75 % moisture content 20 % protein, 3 % lipid and 2 % soluble non-proteinaceous compounds (Briggs & Schweigert, 1990). Meat serves as a vital source of proteins, vitamins such as vitamin B6, B12 and vitamin D, Omega-3 unsaturated fatty acids and minor levels of trace elements such as zinc, iron, phosphorus, bioactive compounds like carnitine, carnosine, ubiquinone and several antioxidant compounds. All these nutritional contents of meat make it an essential component of human diet (Williams, 2007).

Importance of Protein in human diet

Meat is composed of higher concentration of proteins which includes the “structural proteins such as myofibrillar protein, sarcoplasmic proteins and proteins that are present in connective tissue such as collagen and elastin (Pighin et al., 2016). Meat is a complete source of protein as it includes all essential amino acids such as lysine, threonine, methionine, phenylalanine, tryptophan, leucine, isoleucine, valine. Protein concentration differs in both raw and cooked meat as the nutrients get more concentrated during cooking process due to the depletion of water content in the meat and the meat proteins exhibit higher digestibility ratio. As per the studies, 100g of raw red meat contain about 20-25% of protein whereas in 100g of cooked red meat the protein content is about 28-36% as the protein profile is modified after the cooking process. Beef and pork are considered to have the highest protein content in them. The U. S Dietary Reference Intake (USDRI) recommend a daily intake of 0.8g/kg of protein for adults which is the basic requirement for the proper functioning of the body and this prescribed intake rate of protein by USDRI lowers the incidence of cardiovascular diseases, osteoporosis and diabetes particularly type-2 diabetes (McNeill, 2014).

Table showing the protein quality rankings according to FAO/WHO (Williams, 2007).

Near infrared reflectance (NIR) spectroscopy is an ultra- sensitive, rapid and less complicated analytical technique that aids in the assessment of chemical constituents present in the meat sample (Osborne, Fearn, & Hindle, 1993).Near infrared spectroscopy is an advanced method that is widely employed in the quantitative analysis of fat, protein and moisture content in meat and meat products. The differentiation between various classes such as beef and kangaroo meat, chilled and non-chilled beef was possible by the near-infrared spectroscopy method. Sample preparation has a vital role in this method as the non-homogenised muscles absorb bulk amount of energy and generating a less accurate reflectance pattern in comparison with the non-homogenised muscle sample. Inaccurate preparation of meat samples adversely affected the clarity of the prediction of chemical composition of meat sample is equivalent to the protein quantity of the food sample.(Prieto, Roehe, Lavín, Batten, & Andrés, 2009)

Other nutritional constituents of red meat

Vitamins are organic compounds that are present in minor concentration in food and are important for metabolic functions. The major vitamins present in meat and meat products include vitamin B12, B1 (thiamine), B6 and vitamin D. vitamin B6 acts as a coenzyme for several chemical reactions in the human body such as gluconeogenesis. The vitamin B6 concentration are expected to be in the range between 0.40-0.6mg/100g of meat. Vitamin B12 which is commonly known as riboflavin. The vitamin B12 involved in human metabolic process includes the Methyl cobalamin and 5-deoxyadenosyl cobalamin (Rivlin & Pinto, 2001). Vitamin B1 is vital for normal cellular functions and serves as a coenzyme in various chemical process in the body. (Gerber, 2007)

The major minerals which are prevalent in red meat are the iron and zinc. The highest concentration of these minerals is observed in beef and pork meat(Williams, 2007).The iron content present in red meat is the heme iron rather than the non-heme iron contained in plant based foods. The heme iron is readily absorbed by the human body and this absorption rate is enhanced by the protein present in red meat. In meat, the factors such as phytate, tannin, oxalate and fibres are absent in red meat which can adversely affect the iron absorption rate. Similarly, the zinc absorption from animal based food is relatively higher than that from plant based food stuffs. The vital trace element found in meat is the selenium which are an integral part of selenoproteins which includes enzymes that are involved in important process such as anti-oxidative defence mechanism, synthesis of thyroid hormone and nucleic acid (DNA), fertility and reproduction.(Gerber, 2007)

Emergence in the research of red meat as a source of high bioavailable irons, high grade protein and other essential nutrients is on high as great importance is given in the improvement of stamina and vitality. Middle age and beyond requires more consumption of high grade protein which is essential for the maintenance quality of life associated with the required muscle strength and mass. Protein causes a stimulation effect on the anabolism of muscle protein. (McAfee et al., 2010)Amino acids present in red meat are branched chain amino acids, which are necessary for the synthesis of protein. Red meat contains the highest amount of branched chain amino acids. (Ford & Caspersen, 2012)

Previous studies reveal people with excess intake of red meat have been found to have higher cholesterol and higher plasma concentration of total cholesterol and Low-density lipoprotein (LDL) cholesterol and triglycerides(TG) as compared to low and medium consumer of red meat as well as vegans and vegetarians. There have also been studies showing significant relation between red meat and risk of colon cancer. Cooking red meat at higher temperature leads to the development of mutagenic compounds such as HCAs and polycyclic aromatic hydrocarbons (PAHs) which are responsible for various cancers. There are also evidences that show the saturated fatty acid content in red meat can be linked with chronic heart diseases. (McAfee et al., 2010)

Red meat is a rich source of nutritionally rich compounds which are essential in a human diet. Meat is a potent source of protein and it supplies the major amino acids that cannot be synthesized by the body termed as essential amino acids. The nutrient composition of meat includes fat, essential amino acids, vitamins, minerals and trace elements that makes it an inevitable part of human diet. Certain studies do show red meat is harmful when consumed in higher amounts and when cooked at higher temperatures, hence a proper monitoring on the cooking practices and consumption of red meat is essential to maintain a healthy diet.