PCR is a method used to produce relatively large amounts of a specific DNA sequence. The productivity of PCR method depends on different reaction conditions such as the concentration of the DNA template, concentration of magnesium ions, DNA template dilution and polymerase concentration. The aim of this study was to find optimal reaction conditions required for appropriate PCR process. To check the correct conditions the agarose gel and polyacrylamide gel electrophoresis were used. One single, strong amplified band and no unspecific product describe the most suitable amount of given conditions. In the results of this experiment, the most suitable annealing temperature was 62oC, the most proper amount of concentration of magnesium was 2nMol, and the best template dilution was 2µl. The important parameters evaluated in this experiment were template optimisation, annealing temperatures and magnesium chloride concentrations with and without touchdown PCR.

PCR is a simple, enzymatic assay, which allows for the amplification of a specific DNA fragment from a complex pool of DNA. PCR can be done using source DNA from a variety of tissues and organisms, including peripheral blood, skin, hair, saliva, and microbes. Only trace amounts of DNA are needed for PCR to generate enough copies to be analysed using conventional laboratory methods. For this reason, PCR is a sensitive assay (Lilit andNidhi 2013).

To carry out a PCR it is essential to have the following reagents: DNA template, forward and reverse primers, PCR buffer, magnesium chloride (MgCl2), dNTP and DNA Taq polymerase.

Template DNA is a fragment of DNA which is needed to create required copies.

Electrophoresis is a separation procedure which is based on the separation of DNA fragments by size, shape and charge. The clue of this process is the mobility of ions in an electric field (nucleoid acids, which are negatively charged migrate to the anode – positive electrode) (Stellwagen, 1998).

The aim of this experiment was to assess which parameters as annealing temperature, concentration of magnesium, and template DNA influence DNA amplification efficiency and specificity.

Setting up the PCR reaction

A mastermix enough for four reactions was made. 30µl of H2O, 50µl of 2X PCR mastermix and 4µl each of forward and reverse primers were pipetted and mixed in an Eppendorf tube from which, 24µl of the mastermix was pipetted into three separate PCR tubes (i.e. tube 1, 2, and 3). 1µl of sample DNA, 1µl of 1/10 diluted DNA and 1µl of H2O were added to each tubes respectively and each amplified on a PCR block running the following programme:

Finally, the extension step was done at 72oC for 3 minutes.

An agarose gel was submerged in a gel tank filled with TBE buffer. Then 5µl of gel loading buffer was added to each sample and mixed. Next, the first well was loaded with the molecular weight marker and then 10µl of each sample was loaded into each respective wells. Next, the gel was run for 45 minutes at 80V.

Finally, the gel was visualised on the gel documentation system to show separation and migration of the DNA.

Finally, the extension step was done at 72oC for three minutes.

A PCR mastermix mastermix containing 16µl of water, 2.5µl of 10x reaction buffer, 0.5µl dNTPs, 1µl each of forward and reverse primer, 0.5µl of Taq polymerase and 1µl of DNA were pipetted into five tubes (i.e. tube 1, 2, 3, 4, and 5). Next, a Mgcl2 dilution was prepared to get a final Mgcl2 mMol of 0.5, 1.5, 2, 3 and 5mMol which were then added to each tubes respectively to give a final volume of 25µl. Next, the tubes were then amplified on a PCR block using the same cycle parameters as set out in part A.

A PCR mastermix was prepared using the same variables outlined for magnesium concentration.

Then the touchdown PCR programme used was as follows:

After all the different optimisation protocols, the samples to be loaded into the gel were prepared by adding 5µl of loading buffer to each PCR reaction and mixed. Next, 5µl of DNA ladder was pipetted into the first well while 10µl of sample were pipetted into each designated wells. The gel was then run at 100V for 45 minutes. After which, the gel was recovered and placed in a weighing boat containing 1x TBE buffer. Next, 5µl of ethidium bromide was carefully introduced into the weighing boat and left for 10 minutes before visualisation with a gel documentation system.

PCR reactions were set up in 5 different PCR tubes with all the required components for complete PCR reaction , save for a particular factor which was varied to ascertain the optimal concentration necessary for the production of the highest amount of pure specific product. The results obtained from these various optimised factors are represented in the gels below. 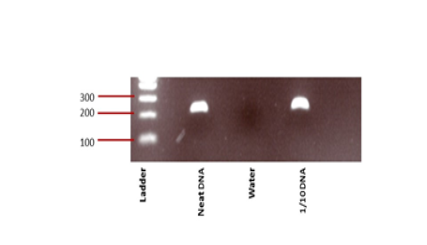 This experiment was performed to evaluate different optimisation protocols to optimise PCR reactions.

For the PCR reaction using an optimised PCR mastermix in part A, the highest amount of products formed was observed in the well containing 1µl of DNA template.The annealing temperature is the most important optimisation, because it can have an influence on the specificity of the reaction. If the temperature is too high, the hybridization will not take place thus, templates and primers remain dissociated. If the temperature is too low, mismatched hybrids will occur. Correct annealing temperature must be low enough to start hybridization between template and primer, and also high enough to prevent forming mismatched hybrids (Roux, 2009). According to the results from annealing temperature optimization polyacrylamide gel (Figure 2), the most suitable annealing temperature was 62oC, because the band was clear and single as opposed to the 48oC, 52oC and 55oC, where the smears (i.e. unspecific products) were shown. The intensity of the band in 62oC was the strongest compared with that of 65oC.

The most suitable template dilution for PCR was 2µl, because it gave in the polyacrylamide gel in Figure 3, the most bright, single band with very low amount of unspecific products formed.

Besides, annealing temperature and template dilution parameters, PCR reaction components could also lead to non-specific amplification. Two variables, which are reported to greatly influence the specificity of the PCR reaction, are magnesium and dNTP concentration (Dwivedi et al. 2003).

For magnesium dilution touchdown (Figure 5), the molarities at 1.5, 2 and 3mMol showed very similar amount of products formed indicating the importance of the magnesium in PCR amplification while for magnesium dilution without touchdown (Figure 4), it was found that 2mM yielded the best results. Magnesium concentration is known to play a critical role in amplification as it can affect DNA strand denaturation, primer annealing specificity and enzyme fidelity. These observations are in agreement with earlier studies (Innis et al. 1990; Eeles et al. 1993). Even brief incubations of a PCR mix at temperatures significantly below theTmcan result in primer-dimer formation and nonspecific priming. Hot-start PCR methods (Erlich et al. 1991;Ruano et al. 1992) can dramatically reduce these problems.

In this experiment, two methods were used to visualise the PCR products formed. They are, Polyacrylamide gel electrophoresis (PAGE) and Agarose gel electrophoresis. Agarose gel is the most popular medium for the separation of moderate and large-sized nucleic acids and have a wide range of separation but a low resolving power, since the bands formed in the gels tend to be indistinct and spread apart. This is a result of pore size and cannot be largely controlled (Stellwagen, 1998). However, Polyacrylamide gels are normally more difficult to prepare and handle, and it requires a longer time for preparation than agarose gels. However, polyacrylamide gels have a greater resolving power, can accommodate larger quantities of DNA without any significant loss in resolution and the DNA obtained from polyacrylamide gels is extremely pure (Guilliatt, 2002). Hence, they are better than agarose gels. It should be noted that polyacrylamide is a neurotoxin (when unpolymerized), but with proper laboratory care it is no more dangerous than various commonly used chemicals in the laboratory (Budowle & Allen, 1991).

Optimisation of Polymerase Chain Reaction is very important for PCR performance to minimize failures, avoid the production of non-specific products and increase specificity of the reaction. The knowledge of proper conditions allows to use PCR correctly and to receive good results.

According to the results of the research the most suitable annealing temperature was 62oC, the most proper amount of concentration of magnesium was 2nMol, and the best template dilution was 2µl.

Those parameters give DNA amplification specificity and efficiency. (Harris and Jones, 1997).

Eeles, R. and Stamps, A. (1993). Managing the method. In Polymerase Chain Reaction (PCR) the Technique and its Application. Journal of Applied Sciences Research. 2(3): 12-26.

Hecker,K. and Roux,K. (1996).High and low annealing temperatures increase both specificity and yield in touchdown and stepdown PCR.Bio Techniques. 20:478–485.