Not a single specific class of antimicrobial agent during the past few decades has yet been discovered leading to development of the new improved drugs for humans. Regardless of the enhanced existing class potency, the requirements for the new agents of anti-microbes continue. The purpose of this study was to explore the PTS system, its regulation and different PTS systems and to investigate catabolite repression and virulence factors in different bacteria especially Escherichia coli and it’s relation with the PTS system. Extensive literature was identified for this purpose to examine the ways through which the PTS system makes antimicrobials and antibiotics. For the discovery of new agents, the PTS or bacterial phosphotransferase system offer a possibility to offer new opportunities. This type of system offers an entry vehicle into the initiation of metabolism pathways and infecting bacteria for such agents. These agents are found to be active on both the sessile and growing forms and due to the eukaryotic lack of the counterparts of PTS these analogues are thought to be non-toxic for the animal host.

Bacteria often live in inhospitable environments and numerous other bacteria are live in places with no oxygen. Hence, there options for generating the energy are limited. There are many clever ways developed by bacteria that may live off whatever is available and it tends to exploit these best advantage resources. In 1964 Kundig, Ghosh, and Roseman highlighted a novel system of sugar phosphorylation in one of the novel phosphorylating sugar system in Escherichia coli. It is a key transport system type which is exclusively found in the world of prokaryotes and the best-known group translocation system, a process in which an organic molecule such as glucose is transported to the cell while being chemically modified.

The exclusive features of this phosphotransferase system comprise of phosphoenolpyvate (PEP) as the phosphoryl donor for phosphorylating sugar and the three vital catalytic entities present termed as Enzyme II, Enzyme I, and heat-stable, histidine-phosphorylatable protein – HPr. The PTS system is responsible for the transport of sugar across the membranes of the bacteria as per the subsequent reaction:

The system of phosphotransferase is often catalyzed by the concomitant sugars phosphorylation as well as hexitols and it usually regulates the response mechanisms dependant on the carbohydrate availability (Postma, et al.1993). It is a very complex system as it often acts as an environmental sensor and therefore requires performance of a numerous functions to sense and successfully delivering a desirable carbohydrate.

Typical bacterial cells make many similar transporters that all stand ready to import whatever sugars are available. A complex regulatory network makes a decision which transporters are switched on and used at any given time. The PTS is also a very energy-efficient system when compared to the other transport systems in the cell. Many transporters use ATP to power the import of nutrients, but PTS uses a molecule of phosphoenolpyruvate (PEP-one of the intermediates in glycolysis) instead, to power the PTS reaction and provide the phosphate. This pre-phosphorylation of sugars primes them for entry into the energy production pathways (Kotrba, et al. 2001).

In E.coli the PTS system is made up of two general cytoplasmic proteins: Enzyme I and a heat-stable protein (HPr). Both participate in transport of all PTS carbohydrates. The substrate-specific protein – Enzyme II consists of three functional domains: IIA, IIB (cytoplasmic and hydrophilic) and IIC (membrane-bound and hydrophobic) (Prescott, 2002).

The Enzyme II domains are specific only for one or a few carbohydrates (Postma, et al 1993).

However, in the PTS fructose transport of E. coli Enzyme I and HPr are fused together with central M domain and it is specific for this particular transport only (Reizer & Saier, 1997). Figure 1 represents the constituents of the PTS system. 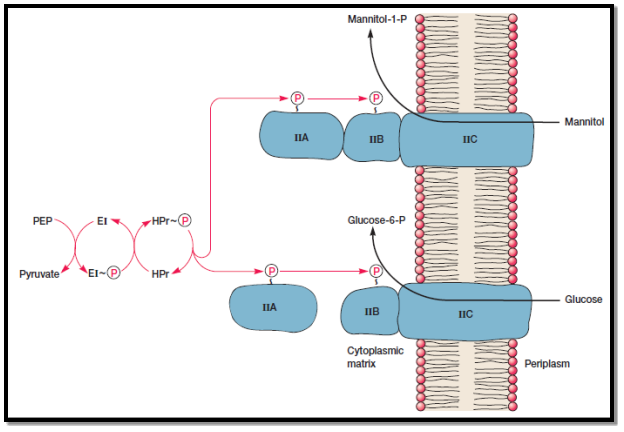 In this project I would like to present a review of literature on the PTS structure, role and regulation. I would like to show the connection between virulence and the phosphotransferase system in different bacteria and finally to examine the ways in which we can use the PTS system to create new antimicrobials and antibiotics without targeting the commensal organisms within the host.

The N-terminal region is responsible binds HPr,and the C-terminal region which consists of the initial acceptor of the phosphoryl group (His-190) which binds PEP (Oberholzer et al, 2005).

EI can appear as a monomer and a dimer (EI-P) but only a dimeric form can be phosphorylated (Chauvin et al 1994). It has been recently shown that magnesium and PEP influence both forms of EI but it remains unclear how a change from monomer to dimer activates an ability of EI to autophosphorylate (Patel et al 2006). Experiments on gel filtration showed that EIN which does not dimerize lacks a PEP-binding site but is still able to accept phosphaote from HPr in reversible phosphorylation (Chauvin et al 1996). 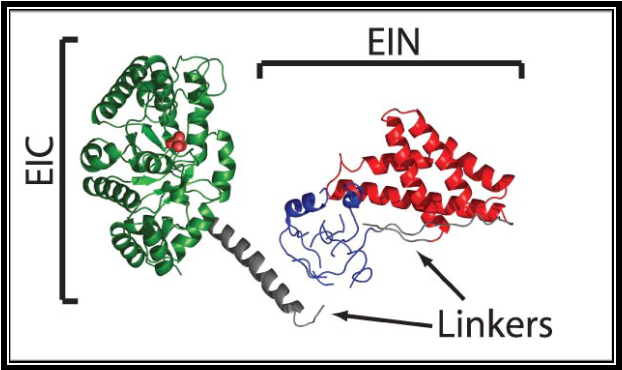 EI catalyses the first step in the PTS cascade. The activity levels of EI will determine the phosphorylation state of all PTS components, therefore it plays a key role in regulatory functions of PTS (Patel et al 2006).

HPr (histidine containing phosphocarier protein) is a single-domain cytoplasmic protein with molecular mass of 9kDa. Its main function is to accept the phosphoryl group from EI. Recently it has also been found that HPr acts as a intermediate in the signaling cascade that regulates transcription of genes which are related to the carbohydrate-response system. Those functions both involve reactions of phosphorylation and dephosphorylation, but at a different sites (Maurer et al 2001).

The structure and function of HPr has been studied in the wide range of organisms. It was purified, inter alia, from: Escherichia coli, Staphylococcus aureus, Lactobacillus lactis, Bacillus subtilis and Streptococcus pyogenes. HPr consists of four-stranded antiparallel B-sheet and L-helixes (two long and one short) set at one side of B-sheet (Fig.3). Interestingly the amino acid sequence in HPr protein differs among the species however, it shows similarity in secondary-structure elements and its tertiary fold (Hahmann et al, 1998). 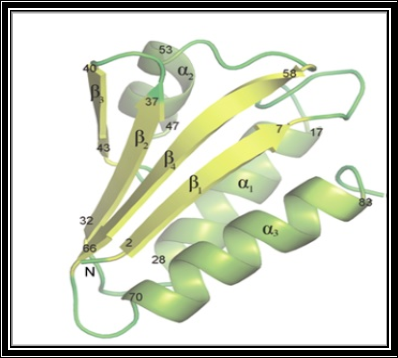 Enzyme II complexes are specific to one or few carbohydrates and consist of two hydrophllic domains: IIA and IIB, and one membrane-bound hydrophilic domain IIC. All three domains can be fused together in a single polypeptide chain or exist as two or three chains that interact with each other (Saier Reizer 1992). The first EII domain that was described was the II Man complex in E. coli which was later illustrated as EIIA and EIIB (Kundig & Roseman, 1971).

The phosphoryl group is transferred from IIA to histidine or cysteine residue on IIB domain, depending on the carbohydrate transported. The third domain IIC is a substrate- specific site that develops a translocation channel for the sugar to be taken up through the membrane. Some specific transporters, like Mannose family in E.coli, possess another membrane-bound protein IID(ebi.ac.uk – many references??)

Recognition of specific carbohydrate by IIC is not fully understood, yet. Although it is known that a certain motif, [Gn]-[Iv]-[Tsn]- E, plays a role in sugar identification. This highly conserved motif is shared among the IIE families and is located in the loop which is faced towards exterior of the cell and may be a part of the sugar-binding site (Robillard & Bross 1999). Also, a glutamate residue located in the most conserved part of IIC – GITE sequence (Chang et al 2005) is involved in phosphoryl transfer to the bound sugar ( Lengeler et al 1990).

A bacterial cell may contain many PTS EII complexes, each exclusive to a different sugar. Most of those complexes share a number of characteristics: three domains IIA, IIB and IIC organized as free or fused structures which can be coupled by linkers and/or arranged in a different order (Lengeler, 1990).

The Glu-Fru-Lac and Man super families are well-described. They are well incorporated with the PTS and are not able to transport carbohydrates by any other mechanism (Saier et al., 2005).

D-Fructose is the only sugar that is taken into glycolysis reaction without rearranging its carbon backbone. Many bacteria lack other permeases but most possess fructose-specific PTS permease. It has been proposed that D-fructose was ubiquitous and specific to primeval organisms (Saier, 1977). In E .coli the multiphosphoryl transfer proteins (MTP’s) were found in fructose-specific EI-like and HPr-like domains. MTP’s are domains that display homology to modular proteins encoded by genes of some proteobacteria (Reizer & Saier, 1997). The IIA Fru-like domain with central M domain of unknown function, phosphorylates IIB domain which is fused with another IIB’C domain (Kotrba et al., 2001). It is the only example of protein with two IIB domains fused with IIC.

In glucose permease of E. coli, EIIGlc contains protein IIA Glu encoded by crr gene and the IIB Glu encoded by pts gene. EIIA phosphorylates EIIB at a cysteine residue which is fused to EIIC through a linker (Postma et al., 1993).

Other superfamilies like Asc-Gat have been characterized from genetic and biochemical view fairly recently (Nobelman & Lengeler, 1996; Hvorupet al., 2003) and can act as secondary carriers depending on their specificity. Enzyme II complex of DHA family displays some similar mechanical characteristics to ATP-dependent precursor and PEP- dependent complex.

Role of the PTS in chemotaxis

Phosphotransferase system is well known of its ability to perform many different functions (Table 1). The role of PTS in chemotaxis has been described in 1974 by Alder and Epstein. They studied glucose transporter as chemoreceptor by using mutants lacking galactose binding protein. Mutants lacking EII glu but not EII Man did not move towards D-glucose and mutants lacking EII Man not EII Glu carried out movement with the specificity for D-mannosamine. Therefore, enzymes II work as recognition elements for specific chemoreceptors however the exact interaction between PTS and receptor-mediated signal remains unclear. 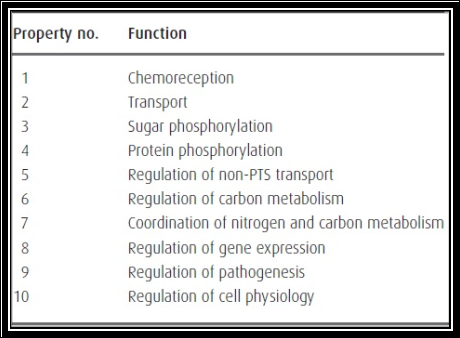 Table 1. Functions of the PTS.

In E. coli and many other bacteria, sensory centre is composed of chemoreceptors: kinase CheA and n adapter protein CheW that are organized in group which increase the signal through communication between those protein. Studies in vivi showed that signal from PTS is sent directly to the chempreceptors ChA and CheW through mediated interactions of EI and perhaps EIIA Glu (Neumann et al., 2012). The participation of EI and EIIA Glu in chemotaxis is reflects the importance of those components in other functions. The phosphorylation status of EI is associated with the rate of uptake of sugars. Phosphorylation of EIIA Glu is affected by the uptake of other sugars, not only glucose, maltose and trehalose because of the reversible reactions that occur within the PTS (Lengeler & Jahreis, 2009).

3.3 CCR and inducer exclusion in other bacteria

3.2 role and regulation by the EIIA Glu PTS protein in enteric bacteria

3.3 The Mlc transcription factor regulated by EIICBGlc in enteric bacteria