This paper indicates the water scarcity and water pollution in Australia. These two things can be serious problems in Australia because it is so major a food exporting country. The sources we use as references are all websites and two scientific paper. The solution for these two water issues are cloud seeding and enacting some laws which forbid people from throwing plastic casually. However, just clouding seeding probably can work efficiently if Australia have sufficient capital to conduct these experiments. The limitation of this paper is source availability, all what I can use is Internet because it is tough for me to find books on this topic in English version.

This scientific paper indicated several causes of water scarcity and water pollution in Australia, and also provided some solutions of solving this issue. Australia is one of the most developed countries all over the world, however, this country got a severe water restriction. One of the most underlying causes is sea surface temperature (SST). In the south of Australia , the SST is lower than average. This signified that there was few evaporation of water, caused atomospheric desiccation, and led to limitation of raining (Sea Surface Temperature (SST) Contour Charts 2013). The cause of water pollution in Australia was polyolefins, which accounts for 52% of plastic production and were used for manufacturing throwaway packaging (Schneider J 2013). These plastics could spoil our food web and ecosystem. Australia mostly gather water from raining and a large proportions of water was used for agriculture, because Australia was a major food exporting country (M. Ejaz Qureshi, Munir A. Hanjra, Ward J 2013). Our hypothesis was Australia could conquer water scarcity and water pollutionif they develop cloud seeding and enact some regulations on environmental protection.

Table 1: Variability of ï¬‚ow in some of the world’s major rivers compared with a Australian rivers.

This table illustrated the Australian river got a very unstable fluctuation between the maximum and the minumum flows, compared to one major river in other countries.

The source of this scientific paper was all Internet. I typed some key words like “Water scarcity in Australia”. I look through all the web pages and gathered the beneficial information and type them into search box once again. For instance, I found one of the solutions of water scarcity in Australia is “Cloud seeding” and I typed this term into search box to get further information. I spent about 40 minutes on researching and found 2 websites for each solution. I haved verified all these sources were all written by reputable professors, scientists or publishers by researching these people and publisher to ensure if their dependency is strong enough for my paper. Some of my sources were another scientific paper.

Two of the most severe fresh water issues in Australia were water scarcity and water pollution, these problems have existed for last of a decade. These two water issues could be a massive problem for Australia. Cloud seeding was a significant solution which throws drikold into cloud, it could increase supply moderately in Australia. Figure 1 demonstrated the mean of precipitation of seeded clouds was 2X103 m3 exceeded from unseeded clouds, it means seeded clounds can actually raise the percipitation (E. J. Smith). In fact, a great percents of water in Australia was polluted by plastics. Meanwhile, Australian plastic production had increased from 170 thousand in 1950s to 280 million in 2011. Figure 2 shows the distribution of plastic pollution in water of Australian city . Most heavy polluted cities were concentrated in the south-eastern and north-western Australia, the place where need to control the plastic production. Some cities in south-eastern Australia had over 15500 km-2 of plastic concentrations. During the a long term of flowing, these plastics could be broken down into small fragments within 5 mm length, which commonly called microplastic and damaged to the food web and ecosystem easily. Therefore, we had two methods to solve this issue. Approximately 37% of plastics were used for manufacturing disposable packaging, comprising bottle, cups and bags,hence, the first solution was reducing the production of single-use plastic package and decreased the demand of using these plastic manutacture by advocating awareness of this water issue (Schneider J 2013). Another efficient solution was enact the laws which prohibit people and also factories from dumping plastics into sea. 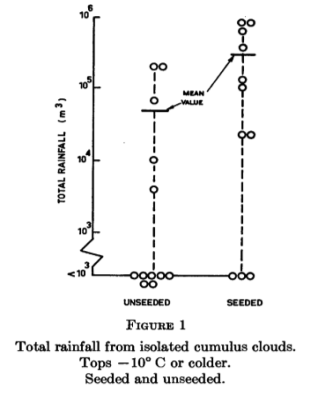 The total rainfall of seeded cloud and unseeded cloud whose tops were -100C or cooler with 30 minutes of seeding from isolated cumulus clouds. 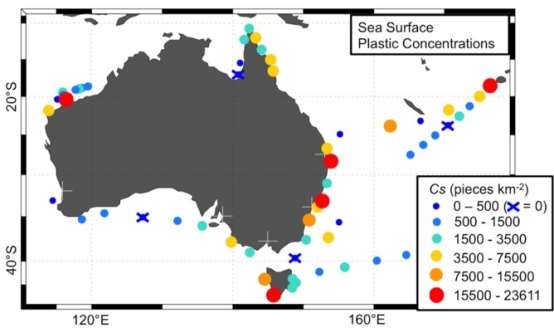 From the scientists and researchers’ perspectives, they think that the best solution that is able to augment the amout of water is cloud seeding. Via this solution, Australia could have sufficient supply and overcame water scarcity lightly. But on the contrary, cloud seeding can be very costly. In most of the cases, it takes millions of RMB to implement one cloud seeding, therefore, Australia would better have a strong economic background beforehand like developing their agriculture or IT industry. On the other hand, as for the water pollution in Australia, most of water is polluted by fragmented plastic and majority of people and factories concentrated in the eastern coast of the Australia, so we could see eastern Australia is more polluted than any other part of Australia. Moreover, because it is hardly to eliminate all these plastic pollutants and made sure there is no plastic contamination in the furture in a scientific way, we could just do it in a political approach. For instance, government could enact laws of environmental protection or making some advertisments to persuade people do not throw plasctic bags or products into any kind of natural water source. In addition, some eco-friendly organizations can just simply set some dustbins around those highly polluted cities for recycling the plastic. But it’s a little bit tough for them to conquer water pollution via this method. All in all, I think Australia can conquer these two water issues based on the previous contents.

In general, cloud seeding still got a substaintia chance to resolve water restriction by it extra precipitation. Australia just need to develop their economy and have enough capital to conduct these experiments. To handle the increasing plastic pollution in Australian water, government have appeal people do not throw any plastic manufactures casually and set several laws to forbid people from doing this, in particular the eastern part of Australia. The effectiveness of this measure rely on the governmental actions and Australian qualities. There are some limitations in this scientific paper, first of all is source restrictions. Sources in this paper are all from Internet. The research suggestion is using books references, because books always much more trustworthy than websites. If we get enough money, we will find a new scientific way to reduce the plastic pollution in Australian water.