The element selected from the periodic table for this investigation is Argon. Over this first section of the poster, we will be overlooking this particular element in detail.

This element from the periodic table is known as a noble gas. It takes up one of the tiniest percentages (at 0.93%) of the earth’s atmosphere on a whole. It was discovered in 1894 by two chemists from the United Kingdom, who names are William Ramsay, and John William Strutt. This was accomplished as a result of fractionally distilling both oxygen and liquid nitrogen, therefore, having Argon released as one of its by-products. It was only completely isolated after the distillation process by examining the waste product from removing of nitrogen, oxygen, carbon dioxide, and water from the clean air.

All the elements on the periodic table are represented by their own unique and individual symbol. Argon is an element on the periodic table represented by the symbol Ar. Also, Argon is displayed having an atomic number of 18; which displays to us that it has an amount of 18 protons located in the nucleus as well as the 18 electrons found on the atoms shells; is also displayed as having the atomic mass of 40; which is the number of protons and neutrons combines. As we already know it has a number of 18 protons from the atomic number we can then find out the number of neutrons by subtracting the atomic mass from the atomic number that equals to 22 neutrons. Additionally, by it being in group 0 it, therefore, has a clear classification of being a noble gas due to obtaining a full outer shell of 8 electrons. Due to this, it has the logical standard state of a colourless gas. By being a noble gas it has acquires special properties, primarily being that this non-metal is a very unreactive gas due to its complete electronic structure, not needing to gain or lose its outer shell electrons to other elements, not needing to achieve its already obtained electronic structure of a noble gas. Additionally, it is found in the third period on the periodic table due to it occupying 3 shells. Its electronic configuration has 2 electrons on the first shell and 8 each on the following two. 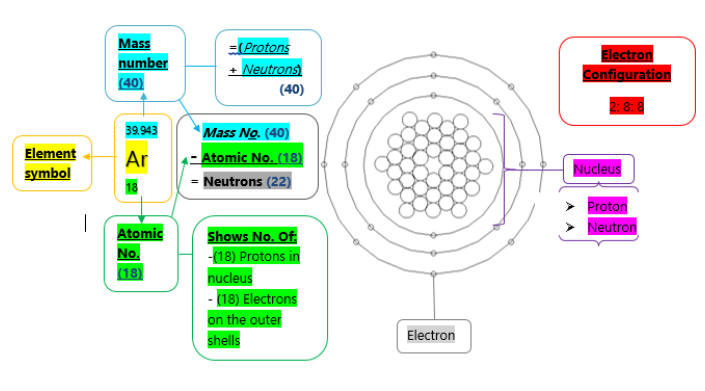 All atoms consist of the same subatomic particles. The table below displays the relative mass and charge of an electron, a proton and a neutron: 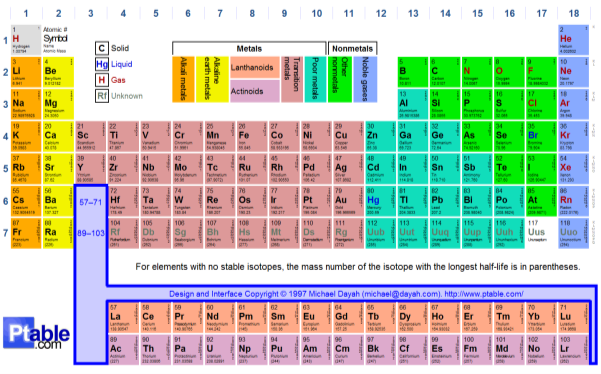 How are the elements in the periodic table arranged? There are different elements in the periodic table. These elements are categorised into separate sections. First of all, the metals (alkali /alkaline earth metals) are arranged on the left-hand of the periodic table. Alkali’s in group one and then alkaline earth metals in the second. Next, the middle of the periodic table is where transition metals are found from scandium’s group to coppers. Lastly for the metals, the poor metals that are found from zincs group to group six. Then follow the non-metals on the right-hand side starting from group to seven. Ultimately, group 0, consists of noble gases. There are then factors that create the periodic table layout. Firstly, the number of shells that occupy an atom correlates to which period number row that it’s in. in addition, the number of electrons in the outer shell of an atom is the same as the group column number in the table. However, for noble gases, they’re different to all atoms due to having a full outer shell of electrons. This, therefore, categorises them in group 0.

In covalent bonds, electronegativity shows how strongly an atom attracts electrons. It increases as you go across a period in a table, therefore, the greatening the attraction for bonding electrons.

These are atoms in the periodic table have only one or two electrons in their outer shells, concluding them in needing to give these away to achieve a full outer shell configuration. These have a low electronegativity due to being found on the far-left of the periodic table as the name suggests.

These are atoms in the periodic table that only need a few electrons to achieve a full outer shell, therefore having a strong desire to grab another atom’s electron(s). These have a high electronegativity due to being found on the far-right of the periodic table as the name suggests.

Ionisation energy is simply the amount of energy needed to separate an electron from an atom to form an ion. Like electronegativity, the process of ionisation energy generally increases as you go across a period.

Elements form bonds to complete their outer shell to make them stable. There are two main types of bonding, ionic and covalent. We will be overlooking these two bonding types in this second section.

Ionic bonding occurs between the positive metal ion and a negative non-metal ion compounds which attract and form an ionic bond by electrostatic attraction.

A positive ion is formed when metals from groups one or two loose electrons to the far-right elements and then negative ions are formed when an atom in group six or seven gains electrons the electrons from those of the far-left elements.

This bonding process occurs in compounds of two non-metals. In a covalent bond, electron pairs occupy an area between overlapping atoms. This is to allow the sharing of electrons between the atoms in the compound which also allows for the structure to be held together and maintained.

Tetrahedral Basis of Organic Molecules Using the molecular models I’ve drawn the structures of the following organic compounds and indicate their bond angles around the mid carbon atom.