This essay focuses on a impact of SLR along the NZ costal margin and an overview of the different adaptation strategies, a recommended framework for decision making to support local adaptation measures.

Even if greenhouse gas emissions stopÂ  tomorrow, the effects of climate change will continue in the certainÂ  manner. One of the recognized impacts of climate change and possibly the most dramatic for the many coastal communities of NZ is the sea level rise. As oceans warm, they expand, raising the global sea level. Melting ice caps and land-based ice sheets also contribute to the rise in sea level. This essay focuses on investigating how much effect and effect along the NZ coastal margin and how much of our preparation we’ve done to minimize this devastating effect.-[2]

Most of our NZ population live and work within the 5km of our coastline which mean the large majority of the built environment will face increasing risks from ongoing SLR-[1]. Basically, there are three types of coastal dangers in New Zealand, which are directly affected by the rising sea level-[1].

Rising sea levels are increasingly affecting our coastal cities. Coastal floods occur when the sea rises above the normal flood level and flows down into lowland streams-[1]. This results is flooded buildings as well as damaged subway infrastructure. The rising sea level could increase the duration and extent of the floods of the river. If such river floods peak at high water, they become more damaging as flood waters become higher-[3]

The projected frequency of extreme water levels is important because inland waters are a threat to people living near our coastal cities and small islands. As reported in the report Dr.Jright Wright, below table shows that In future, our four major coastal cities port’s will more than the excesses of today’s “100 years of events” more and more often-[1] 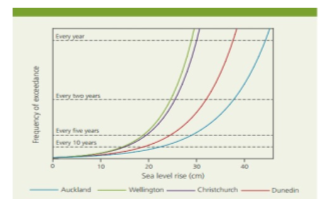 All our infrastructures such as buildings, roads, airports, wastewater systems based on a historical understanding of the range of tides and occasional floods in storms. As the sea level increases, areas of deep coastal coasts, which are flooding in storms, are becoming more frequent and heavy flooding. Areas that are a little higher also begin to flood over time.-[1]

As already mentioned, coastal flooding occurs in deeper areas when the sea rises above the normal high water level; it will open up wetlands to the water, erode beaches, increase floods and increase the salt content of river estuaries.-[1] As a result of these effects of coastal erosion, the effect washed on sediment or rocks and our coastal line is changing. Coastal erosion is a natural process that has been happening for thousands of years. Sea water collides with cliff and shore, it causes sediment or rocks to be washed out to the sea. Erosion can happen under any condition, but it tends to increase rate when wave are strong. Wave cause erosion in four main types-[4]

The way in which erosion on the coast changes depends largely on the nature of the rocksÂ  in other words its Geology-[4]. But as the sea level rises, the erosion increases in many places around the coastline when strong storm waves arrive at the beach-[1]. Thus, beaches and cliffs that are vulnerable to erosion are likely to destroy faster. Not only that stable beaches can also begin to destroy, and beaches that accumulate may slow down or begin to erode.-[1] 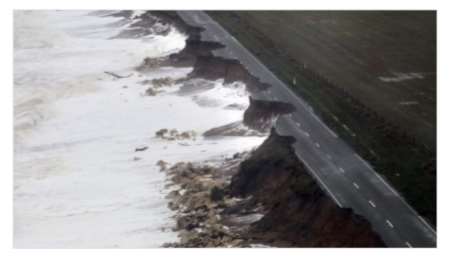 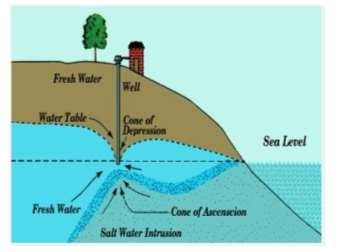 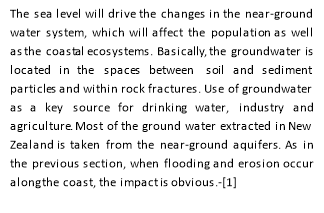 Unfortunately, groundwater problems are not visible and it is very difficult to measure. Most of our coastal areas, the groundwater is not far below the ground and is connected to the sea. As the sea level rises, the water level in these areas will rise, which can lead to both human activities and coastal ecosystems-[1] such as: 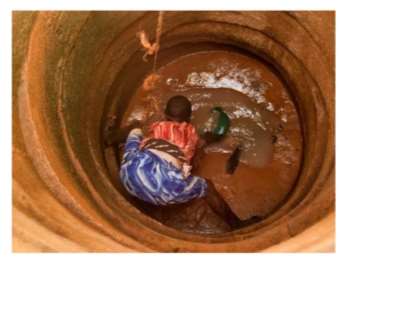 Protect is a reactive strategy to protect people, property and infrastructure from rising sea level and is generally considered the first answer. The protection of the coast by structural mechanisms such as dikes, seawalls and sandbags is the traditional approach to deal with the rise in sea level in many parts of the world. Protection strategies tend to be expensive, and can have long-term effectiveness in long-term vulnerable places.-[2]

But this can lead to a false sense of security. It can also increase the risk by encouraging the development behind dikes and other structural protection elements, which can make the number of people and the amount of property at risk if this is not. Protection strategies are particularly attractive when the costs of protecting governments are supported at different levels like if individual owners bear little or no risk and if land use is not perceived by the municipal authorities in the long term.-[2]

This is an adaptive strategy that enables continuous occupation of the coastal areas while changing human activities and infrastructure to adapt to the rise in sea level. The accommodation can be part of the new building, the use of structural filling to raise the increase in the habitable space, the restriction of the building areas subject to flooding in garages, others-[2]

Any strategic decision to withdraw, relocate, or abandon private or public assets that are threatened, relocated or abandoned due to the rise in sea level and associated coastal risks is a retreat. It is an adaptive strategy to limit the use of structural protection, the development of discourages in areas exposed to sea level rise, and the planning of the possible relocation of buildings and infrastructures to areas without risk or lower risk areas-[2].

This means that the new development does not take place in areas exposed to coastal hazards associated with an increase in sea level or a surface that will increase over time. Basically this is the identification of the future “no build” areas within the municipal planning documents.-[2]

It is a prudent step to begin planning the future sea level from now on. From the preparation of New Zealand for rising seas: certainty and Uncertainty (Wright, 2015) – [1] report contains eight recommendations to the government. The first seven focus on improving the direction and advice given to the councils. The last recommendation focuses on the fiscal risks of the rise in sea level.-[1] 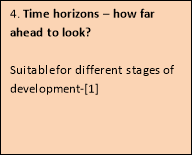 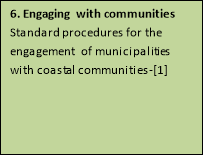 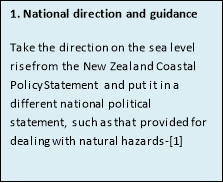 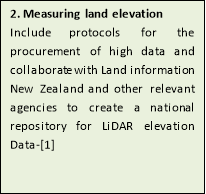 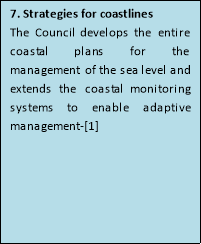 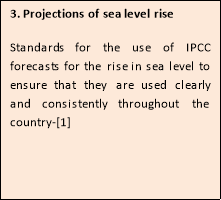 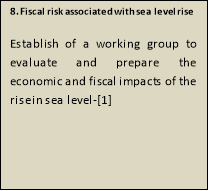 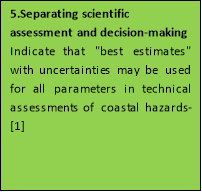 All thing consideredÂ  , this essay focuses on a New Zealand impact of SLR along the NZ costal margin and an overview of the different adaptation strategies, a recommended framework for decision-making to support local adaptation measures. As a result, the impact of the rising sea level on our coastal line is more likely to be felt. Therefore, adaptation responses must be introduced earlier to take into account the excessive rise in sea level-[10].

Overall, we can suggest that there is no single adjustment to the sea level rise, and that the most logical answer would be a combination of all four basic strategies, as discussed in the previous sections, and it is likely that decisions on appropriate action are taken at a Area by area with factors such as topography, prosperity and population density all expected to influence the suitability of each response-[10]

Although the information that local and government authorities need to know must be aware that there is a high percentage of uncertainty that are present in sea level forecasting, and adaptation responses must be flexible, under changing conditions, and typically implement responses well in advance, When required-[10]. 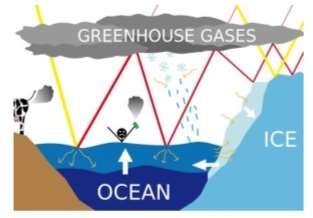