The first commercial fluidized bed dryer was installed in USA in 1948 to dry dolomite or blast furnace slag (Zahed et al., 1995).  Dolomite and furnace slag are mineral build ups made from carbon emissions very much like the emissions that cause air pollution.  The fluidized bed dryer helps remove the build up of such minerals and thus causes less emissions during the manufacturing process.  For environmental reasons as well as the efficiency, the idea of using this fluidized process took off; and shortly after the first install, hundreds of fluidized bed dryers began operating world wide.  Due to this process, operation managers begin to realize that other materials such as sand, grans, chemical crystals and fertilizers can be fluidized due to their granular physical properties.  (Vanecek et al., 1966)

Fluidized beds are used in many industrial settings.  In face, it is more often than not the last step in the manufacturing process.  This insures good product at a lower cost than traditional drying methods.  For instance, low moisture content in the polymer product is a prerequisite for subsequent extrusion processes.

During the fluidized drying process, the grains of materials being dried are tubbled in such a way that they look and may even feel like liquid.  Try to imagine Cream of Wheat–yes, the hot cereal mix.  Now, once the water boils you add in the cereal mix and you can see individual grains boiling around in the pot of hot water.  Eventually, it becomes thicker and thicker as more and more grains are incorporated.  The result turns out to be a pot full of a solid that bubbles and pretends to be a liquid.  That’s exactly what fluidization of a solid looks like and this is the process the fluidized air beds uses to get every particle of a substance dried.

Just as in the Cream of Wheat example, there is an issue of particles sticking together and causing clumps.  The solution to this is the velocity at which gases are pumped into the ‘chamber’.  However, can drying rates be predicted at velocities beyond the bubbling regime?  The difficulty is is that such velocities are often used to overcome process upsets in industrial practice.

“For instance, in nylon production, the particles entering the fluidized bed dryer are wet and sticky as they have been treated under cooling water during pelletization. These particles often clump together and de-fluidize the bed. To mitigate against this problem, higher fluidizing gas velocities are used to breakup these clumps of particles. In this work, three theoretical methods are used to model drying rates of two particle types at a laboratory fluidized bed. The accuracy and the range of validity of the three methods are discussed. The methods are based on adiabatic heat-mass balance (Kunii and Levenspiel, 1991), Chilton-Colburn analogy of heat-mass transfer (Sherwood et al., 1975) and mass transfer coefficient by Gupta and co-workers (Gupta et al., 1974; Delvosalle and Vanderschuren, 1985). After surface water is removed, the characteristic drying curve method is used to model the drying rates during the falling-rate drying period.” (Key and Suzuki, 1974).

The design of fluidized air beds is extremely complicated on an industrial scale.  More than likely, you would have to be an engineer with a background in physics to understand how the mechanics and flow systems work.  However that being said, there is a way to describe the fluidized air bed so that most readers can understand their properties and therefore see the guiness behind their design.

The fluidized bed results when a fluid, usually a gas, flows upward through a bed of suitably sized, solid particles at a velocity sufficiently high to buoy the particles, to overcome the influence of gravity, and to impart to them an appearance of great turbulence, similar to that of a violently boiling liquid. Fluid velocities must be intermediate between that which would lift the particles to maintain a uniform suspension and that which would sweep the particles out of the container. The fluidized bed is in a relatively stable condition of vigorous contacting of fluid and solids, with a lower boundary at the point of fluid inlet and an upper definite and clearly marked boundary surface at which the gas disengages itself from the system. The upper boundary usually goes up or down with increase or decrease of the gas velocity.

Particle sizes are often in the range of 30–125 micrometers, but they may vary to1 /4 in. (6 mm) or more. Superficial gas velocities may range 0.02–1.0 ft/s (0.006–0.3 m/s), depending on factors such as the relative densities of the gas and solid, the size and shape of solid particles, and the number of particles per cubic foot (bed density) desired.

An increase in fluid velocity increases the lift or upward drag on the particles. This causes them to rise, thereby increasing the bed voidage and the effective cross section available for gas passage and also decreasing the number of particles per unitvolume and the density of the bed as a whole. This decreases the interstitial velocity to reduce the drag on the individual particles, which then settle somewhat until the gravitation and the fluid-dynamic forces on the particles ultimately come into balance. Further increase in fluid velocity causes further bed expansion until the bed passes beyond the limits of the containing vessel and the particles are transported.

Fluidized beds are frequently selected as processing equipment because of their excellent heat transfer properties and the ease in controlling transfer of solids into, out of, and within the process system. In gas-solids fluidization, fluidized beds have been used most frequently in drying operations than in any other single application (Geldart, 1986).

With such excellent opportunities for heat and mass transfer to or from solids and fluids, fluidization has become a major tool in such fields as drying, roasting, and other processes involving chemical decomposition of solid particles by heat. An important application has been in the catalysis of gas reactions, wherein the excellent opportunity of heat transfer and mass transfer between the catalytic surface and the gas stream gives performance unequaled by any other system. In the petroleum industry, for example, the cracking of hydrocarbon vapors in the presence of solid catalysts affords many advantages. Among these are a minimum tendency for overheating of one particle or one part of the catalytic bed as compared to another, and the immediate removal of the reactant products, resulting in greatly increased efficiency of the catalyst. The catalyst itself often becomes carbonized on the surface because of the coking tendency of the reacting hydrocarbons. This catalyst, as shown in the illustration, may then be removed by pneumatic transport or otherwise to a second fluidized reactor wherein an oxidation is accomplished, again with maintenance of relatively uniform conditions. The rejuvenated catalyst may be returned to the prime reactor by pneumatic or other transfer lines, and the process can be continued indefinitely.

Some fluid reaction systems have been standardized in design, permitting the operation of units comparable in maximum size to other types of units in the adjacent steps of processing.

From a process-development standpoint, the dense bed of particles and gas means that enough

While catalytic particle gas reactions have long been done in fixed beds, these cannot all be converted to fluidized operations. There are notable advantages and disadvantages of each. The advantages of the fluidized bed have been evidenced in the much better mixing, which results in greatly improved heat transfer, mass transfer, and uniformity. Thus there may often be better heat and material recovery, that is, increased yields, lower catalyst losses, and sometimes lower pressure drops. Fluidized beds allow ready additions of solids, combustion products, or direct combustion within the bed to give a much greater flexibility of process design and operation.

On the other hand, the concurrent flow in a fluidized reactor is disadvantageous, and multibed reactors are necessary to secure the advantages of countercurrent flow. There may be mixing of products with raw materials throughout the bed, and particularly when the solid is a reactant, it is difficult to obtain a high conversion and almost impossible to obtain a 100% conversion, except in a multibed system. Some attrition and thus loss of catalyst particles and changing fluidizationproperties with changing average size result. Recovery equipment for fines may be necessary, either because of their value or their nuisance as air pollutants if lost to the atmosphere. Similarly, there is considerable erosion of the walls, and especially of transfer lines. Because of the nature of fluidization, many reactions requiring a catalyst bed cannot be so operated, for example, those that give waxy or gummy materials which would agglomerate on the catalyst particles and also those wherein properties of the solids or of the gas stream, the necessary gas velocities, and so on, are outside of the mechanical possibilities of the fluidization operation. Thus, fixed beds are in many cases either required or most advantageous.

When air is pumped through sand in just the right way, the sand begins to behave a lot like a lipuid. As air escapes between the sand particles, items placed in the sand will begin to float. Others will sink it depends on the wait. And when the air stops, the sand behaves  like a solid again. This is the fluidization of sand and it looks and feels really cool.Seeing the sand move like a liquid is wild enough, but the most fascinating part is when you drop objects into the sand and they splash and bob, making waves as if you had just thrown them into your bathtub.

How to make it.

Mark Rober uses a bunch of pieces of PVC pipes in a small container that would normally be used for storing items in the closet or under the bed. The catch is making the holes just right. According to Rober, this tech is used commercially today to ensure that grain flows  in a silo among other things. You can go to Mark Rober’s channel to learn more, like how to make it and what you can do with it.(make it in a hot tub) It’s all so used for powder coat painting and grain silos. 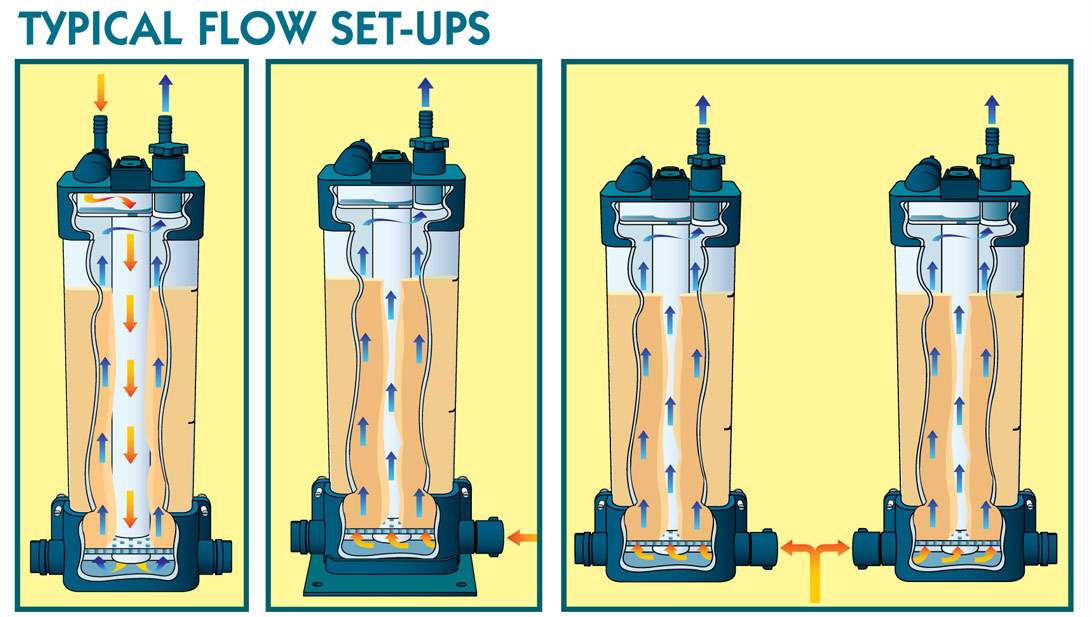