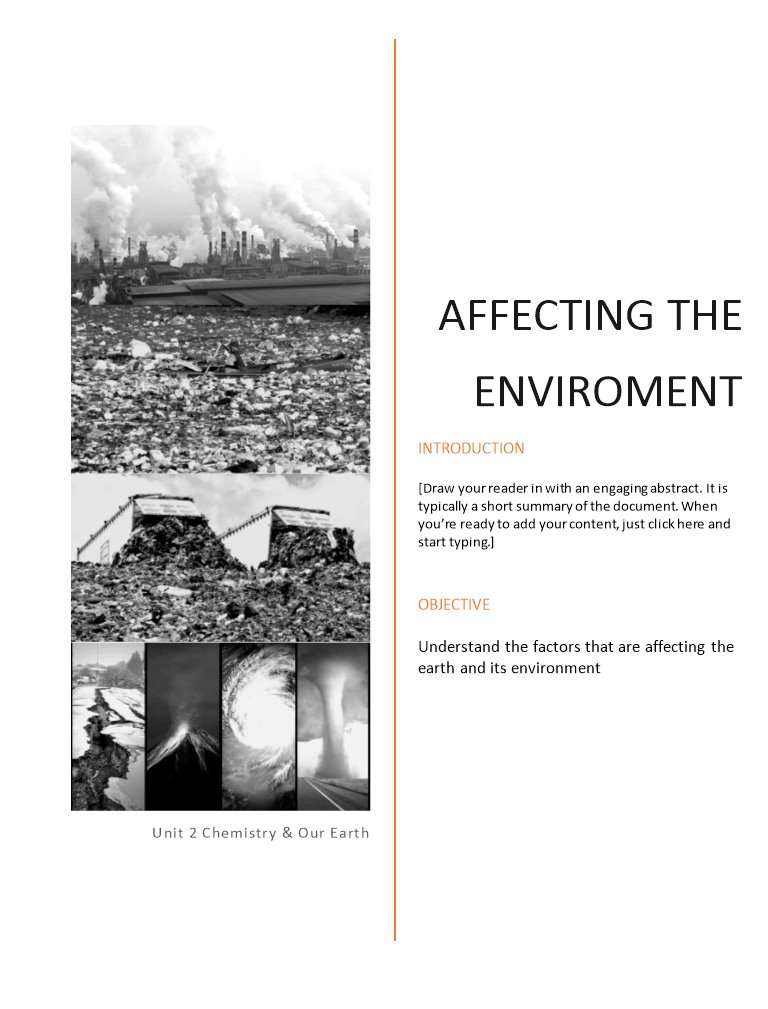 1D.8 Identify the human activities that affect the Earth and its environment.

There are various human activities that affect the Earths environment these are :

2D.P8 Describe the human activities that affect the Earth and its environment.

The transportation used in day to day life produces a lot of smoke and harmful gasses such as Carbon Monoxide, Carbon dioxide & Sulfur dioxide. It is released in the air from the combustion of fossil fuels; this pollutes the air. Inefficient engines release excess carbon monoxide ; a poisonous gas harming organisms in that environment. Sulfur dioxide can mix with water in the clouds and form an acidic solution which contributes to acid rain, this acidity damages plants and aquatic ecosystems as some organisms cannot survive in acidic environments. Acid rain also damages and erodes some man-made structures such as limestone statues etc. Carbon dioxide emissions also contribute to the global warming of the planet, as it builds up in the atmosphere it gradually traps heat which over time & raises the temperature of the planet; this can be fatal to all ecosystems and environments.

Water Pollution from use of fertilizers and various waste materials

The rise of capitalism and consumerism has led to a growth of various products and food being produced at a faster rate. Modern Agriculture uses many synthetic fertilizers which dominantly contains the essential nutrients for plant growth such as nitrogen, potassium & phosphorus. They are given to plants to enhance their growth & maximize their yield. When applied, the excess fertilizer or nutrients can leak from the soil into nearby water sources as the minerals are very soluble in water; this pollutes the water and starts the process of eutrophication and harms the aquatic ecosystem.Â  Eutrophication starts when

Fertilizers are fatal to aquatic ecosystems and environments in excess. In addition sewage and waste products can also runoff or end up in aquatic environments and either kill the organisms in it or pose a serious hazard to its inhabitants.

1D.9 Identify natural factors that have changed the surface and atmosphere of the Earth.

The Natural factors that have altered the earth’s surface and atmosphere are :

2D.P9 Describe natural factors that have changed the surface and atmosphere of the Earth.

Earthquakes from the movement of tectonic plates

some earthquakes make the ground shake so violently that it destroys entire landscapes and environments. However, earthquakes can also cause landslides and tsunamis, change geology and ruin natural habitats of many living creatures. For instance, when an earthquake happens in the middle of the ocean, it can create waves that are so large that they destroy coastlines, cities, and forests hundreds of miles away.

Earthquakes have helped to shape the Earth’s landscapes, but they also continue to alter those landscapes. Earthquakes are dangerous to human, plant and animal life, and when large earthquakes occur, they have the power to drastically change the surface of the Earth.

Volcanic eruptions involve the incursion of liquid magma into a physical environment, and the effects include major transformations, ranging from the formation of new land to the destruction of the viability of an existing environment. Just one example of the creation of new land comes from the Hawaiian Islands, which appeared as magma cooled into land after eruptions.

As lava flows across the ground in the wake of a volcanic eruption, any existing plant life is at risk of immediate destruction. When lava mixes in with melting snow or rain water, the flow speeds up, and the environmental effects accelerate as well, because the destructive effects of the lava largely remain, but the spread is generally wider and takes place more quickly.

An example of this took place in Montserrat when Chances Peak entered a phase of eruption between 1995 and 2000. In 1995, the mountain began giving off signs of coming activity through eruptions of ash and dust. The most intense eruptions took place in 1997, and 11,000 people were evacuated to the northern end of the island as well as to other islands.

The result of the eruptions involved the covering of the capital in mud and ash, and the destruction of more than a dozen settlements which have been rendered uninhabitable.