Organic forms like metal chelates of transition metal ions in particular Zinc (II), Copper (II) and Manganese (II) with amino acids and peptides are widely used in animal feeding as they appear to induce as faster growth and better resistance to various diseases in comparison with the simple inorganic salts [3]. It has been suggested that these effects are correlated with the improved metal bio-availability. The chelates are absorbed in the small intestine, possibly using transporters for amino acids small peptides [4]. Many forms of metal complexes with amino acid chelates and hydrolyzed proteins are commercially available, as metal amino acid chelates and complexed chelated (metal) proteinates (CCP) respectively [5-7]. The methionine hydroxyl analogue largely used in animal nutrition as a source of methionine, forms stable chelates with divalent metals of formula [{CH3SCH2CH2CHOHCOO}2 M].nH2O [8].

Fig.1. Structures of (a) DL-methionine and (b) methionine hydroxy analogue.

The use of so-called variant recipes in the production of industrial feeds causes that in practice the analyst encounters a differentiated and unknown composition of the so-called matrix, i.e. the elements of a feed mixture that in many cases made it hard to isolate and at times even make it impossible to mark MHA in the environment of a feed mixture [15]. Moreover the accurate determination of methionine and methionine hydroxy analogue contained in the metallic chelates of feeds depended on complete releasing of methionine and methionine hydroxy analogue from metals. The purpose of the paper was to develop and evaluate the method of simultaneous determination of MHA and Met in forms of free or in forms of chelates in compound feed samples.

The stock standard solution of Met and MHA was prepared weekly using DL- Methionine (extra pure, Merck) and Alimet (commercial name of the hydroxy-analogue of methionine containing 89.7% MHA in 0.1 N HCl respectively. All working solutions were prepared by diluting the stock standards as necessary. Deionized distilled water obtained from a Milli-Q system (Millipore, Milford, USA) was used for standard dilutions and other necessary preparations.

Aliquots of finely ground samples (mean particle size of 600 µm) containing 0.1 gr methionine hydroxy analogues (MHA) or 0.1 gr DL-methionine (Met) in forms of free or in forms of metal-chelates were added in 20 ml of 0.1 N HCl solution and heated in autoclave in steam flow in 120 oC for 5 min or in oven with 90 oC for 20 min. After cooling, by adding 20 ml of EDTA solution (10% W/V) and 5 ml of acetonitrile, the samples were shacked for 10 min and then solutions were filtered using 0.45 µm filter. Volume is filled to 100 ml with distilled water and a proportion of solution injected onto the HPLC column.

Fig.2. Chromatogram of the extracted Met and MHA from feed.

Separation and quantitation of MHA and Met have been performed with reverse phase high performance liquid chromatography (RP-HPLC). The column was NovaPak C18 (150 × 4.6 mm, 5 µm) in ambient temperature. Samples were injected in volumes ranging from 5 to 20 µl using Rehodyne injector. The solvent system for separation of Met and MHA consisted of 5% acetonitrile + 1.5% NaH2PO4 in water. Using this isocratic mobile phase the chromatographic run time was 6 min. After this, a washing step was programmed to 40% acetonitrile in mobile phase so that any residual sample components would be cleaned from the column. The washing step was 5 min and column conditioned by primary mobile phase for 4 min prior the next injection. The flow rate, UV wavelength and detector attenuation used was respectively 1 ml min-1, 214 nm and 0.2 a.u.f.s. The amounts of MHA and Met contained in the samples were determined by interpolating the value of the peak area of calibration curves obtained by injecting 5, 10, 15, 20 μl of mixed standard solution containing 200 mgr L-1 Met and 400 mgr L-1 MHA. The bulk standard was prepared weekly. Fig.2 shows a chromatogram which obtained by injection of the extracted sample solution.

In order to verify differences of effecting factors on extraction efficiency, analysis of variance (ANOVA) was applied with the level of significance set at 0.05. The SPSS statistical program (SPSS Inc, Illinois, USA) was used to perform all statistical calculations.

Study of effective factors on extraction efficiency of Met and MHA

Table 1 Mean recovery of the Met and MHA from compounded feed with distilled water and 0.1 N HCl solutions at 90 oC for 20 min.

Different temperatures (25-120 oC) in different period of times (5 min -3 hours) were examined to evaluation of the effects of temperature and heating time in the simultaneous extraction of Met and MHA in both forms. Based on extraction efficiency of the Met and MHA in the forms of free or metal-chelates, three conditions including: Autoclave (T: 120 oC, t: 5 min), Oven (T: 90 oC, t: 20 min) and Room temperature (t: 3 hours) were chosen.

The effect of strong ligand such as EDTA on extraction of Met and MHA in forms of metal-chelate was investigated. Table 2 represents the mean recovery of the Met and MHA in forms of metal-chelate in different heating condition (different temperature and time) in the presence or absence of EDTA as a strong ligand. The results illustrated in Table 2 reveal that the extraction of the MHA from MHA metal-chelates in feed was about 94% with heating by autoclave in 120 oC for 5 min or oven at 90 oC for 20 min. By adding the EDTA solution to the samples the recovery of MHA from MHA metal-chelates become > 97%. The recovery of the Met was > 96% even in ambient temperature and ETDA do not show a considerable effect on the Met recovery from the feed.

Analytical performance of the method

Quality variables including the limit of detection (LOD) and precision, as the relative standard deviation (R.S.D.), were investigated to evaluate the analytical performance of the proposed method. According to the IUPAC identification [16] the limit of detection (LOD, 3δ) of the proposed method was 2.33 and 5.46 µg mL−1 for Met and MHA respectively. MAMwith The R.S.D. was 4.4 and 7.3% (C = 10 µg mL−1, n = 5) for Met and MHA respectively. Good linear relationships exist for peak area counts versus the amount of Met and MHA (Fig. 3). The regression equation for calibration curves for Met was Y = 209551x + 296453 with a correlation coefficient (R2) of 0.9983 and for MHA was Y = 182603x + 294054with correlation coefficient (R2) of 0.9995 where Y is the peak area counts and x is the concentration (ppm) of analyte. 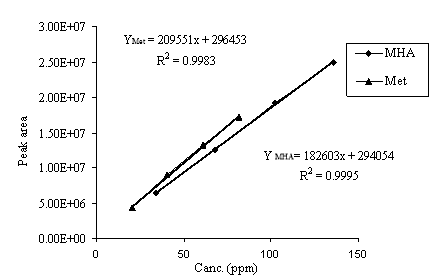 For evaluation of the described method, the recovery of Met or MHA from pure Met or MHA metal-chelates were determined (Table 3). The results show good agreement between the results of the mentioned method and the value which declared by the producers. The precision was determined by calculating the relative standard deviation of four analyses for each condition.

The method also was applied for simultaneous extraction and determination of different forms of Met and MHA from compounded feed. As shown in Table 4, the obtained results prove a good agreement of the mean content of Met or MHA in mixtures with the declaration.

Table 4 Simultaneous determination of different forms of Met and MHA from compounded feed.

Table 5 Content of Met or MHA in the analyzed industrial feed mixtures (g/Kg).

In order to evaluate the effect of typical sample matrix, numerous industrial feed samples, which their Met or MHA content declared by the producer, originating from Iran, Germany, Italy and France was qualitatively examined. The results (Table 5) show a good agreement between the obtained mean content with the declaration of free or metal-chelate form of Met or MHA in industrial feed mixtures.

Basing on the above results, the usefulness of the described method for determination of the Met and MHA in form of free or in forms of metal-chelates in feed mixtures can be stated.

EDTA is a stronger ligand than MHA therefore it can form more stable complex with metals and it must affect on recovery of MHA. Therefore by adding EDTA solution to the samples the recovery of MHA (> 97%) from MHA metal-chelates were significantly higher, but this has no significant effect on Met extraction recovery.

A simple, rapid and reliable method for simultaneous extraction and determination of Met and MHA in forms of free or in forms of metal-chelates in feed samples has been developed. This method can be used for analysis of free methionine or methionine hydroxy analogue as well as their metal-chelate form, from industrial feed samples without any variation. It involves a simple procedure sample preparation using 0.1 N HCl solutions and heating in autoclave or oven, which followed by addition of EDTA and acetonitrile, and quantitation by an isocratic HPLC analysis on a C18 column.