Deep-fat frying is basically a process which involves immersing a food item in a large quantity of oil or fat at high temperature, which is normally replenished and reused numerous times before being disposed and it is possibly one of the most dynamic processes in all of food processing (Sumnu & Sahin, 2008). Products of deep-fat frying come with desired sensory characteristics such as fried food flavour, golden brown colour, and a crisp texture (Warner, Gupta, White, & others, 2004). A crisp outer texture is an ultimate characteristic of most fried foods which is developed through rapid surface dehydration during frying and can be controlled by changing a few variables, including product preparation, breading or batter formulation, frying procedures, and post-frying conditions (Banks, 1996).

Deep-fat frying uses a large volume of liquid such as oil, fat, and paraffin which has high boiling point and buoyancy forces are particularly efficient to homogenize the temperature along the vertical direction because oil and fat are highly thermo-expandable fluids (Achir, Vitrac, & Trystram, 2008). Oil often makes up significant portion of the final food product, as much as 45% of the total product although frying oils serves primarily as a heat exchange medium (Erickson & Perkins, 1996). According to Rossell (2001), frying is suitable in cooking all types of foods such as meat, fish as well as vegetables especially potatoes which are probably the food most associated with frying, as potatoes are used to produce both French fries and crisps.

Fried food undergoes two correlated mass transfers which are water loss and oil uptake during frying (Bassama, Achir, Trystram, Collignan, & Bohuon, 2015). Therefore, the nutritional value of the final product is significantly affected by the nature of the frying oils as they are indeed differ markedly in terms of their fatty acid and fat-soluble micronutrient composition (Chiou, Kalogeropoulos, Boskou, & Salta, 2012). Oil is usually heated at high temperatures at 160-200°C in the presence of air, and water vapour is released from the fried food during the discontinuous frying process resulting in undesirable changes that may occur concurrently with desirable modifications, one such change being the loss of nutrients, and especially vitamins (Juárez, Osawa, Acuña, Sammán, & Gonçalves, 2011). Due to thermal decomposition, chemical reactions like oxidation and hydrolysis occur, thus causing changes of the functional, sensory and nutritional quality of the fat and may eventually reach a point where it is impossible to prepare high quality fried products and the frying oil will have to be discarded (Stevenson, Vaisey-Genser, & Eskin, 1984). A few factors that affect rate of the oil decomposition are composition of the oil, the temperature and the length of frying, continuous or intermittent frying, type of fried food, and fresh oil replenishment (Fan, Sharifudin, Hasmadi, & Chew, 2013). In addition, according to Abdulkarim et al (2007), oils with high amount of oleic acid which is rich in monounsaturated fatty acid are more stable and slower to develop oxidative rancidity during shelf life.

The quality of food may be defined as the composite of those characteristics that differentiate individual units of product’s acceptability (Lawson, 1985). The initial quality of oil as well as its durability during frying is influenced by all steps included in processing of the oil and can have a significant impact on the quality of fried food prepared with it (Orthoefer & Cooper, 1996). Assessing frying oil quality is very important because a certain amount of oil is absorbed by food during frying and becomes part of the food (Rossell, 2001b). When compared with fresh oil, the degraded oil has an altered nutritional and toxicological profile (Perkins & Kummerow, 1959). Therefore, determination of its quality is critical for reaching the desired shelf-life for the product, and reduces the potential for creating health hazard (Gupta, 2005).

Oil is used repeatedly at high temperatures, and various chemical processes such as hydrolysis, polymerization, oxidation and fission take place resulting in the accumulation of products of decomposition that not only affect the quality of fried foods but also to human health, especially when frying fat or oil is highly abused (Frankel, Smith, Hamblin, Creveling, & Clifford, 1984; Fritsch, 1981). According to Stevenson et al (1984), the rate of formation of decomposition products vary with the food being fried, the oil being used, the choice of the fryer design and the nature of the operating conditions. For example, frying foods that contain high levels of egg solids can contribute to early foaming due to leaching of lecithin into the frying oil and fats from meat or chicken can diffuse into the oil during the frying process, thus contaminate the frying oils (Landers & Rathmann, 1981; Weiss, 1983). Stevenson et al (1984) said that operator should ensure that the food being cooked are uniform in term of size and free from excess surface water, crumbs or breading material to reduce fat breakdown caused by the food during frying.

Cleanliness of the fryer is one of the factors to be considered in controlling fat breakdown as polymerized fat deposited on the fryer tends to catalyse the formation of more ‘gum’ which contributes to foaming, color darkening and further deterioration of the frying fat. In addition, ensuring that all traces of detergents are removed during rinsing is very important since this substance can catalyze fat breakdown when frying is resumed (Jacobson, 1967; Weiss, 1983). Oil quality can be maintained by turnover rate which is described as the ratio of the total amount of fat in the fryer to the rate at which fresh fat is added to the kettle and daily turnover at 15-25% of the fryer capacity is recommended (CJ, 1967). Condition of the frying fat gets better when the rate of turnover is higher as appropriate turnover rate will replace lost of silicones due to adherence to the fried items and will keep the level of FFA small.

Furthermore, quality of the oil at point of purchase contributes significantly to quality of used frying oil as illustrated in Table 1.

There are three main factors that are important in frying operation which are the food to be fried, the oil used, and the characteristics of the process especially temperature and frying time (Blumenthal, 1991). Chemical reaction like oxidation and hydrolysis will affect the functional, sensory and nutritional quality of the oil which may eventually reach a point where the oil needs to be discarded. Physical changes in oil that occur during heating and frying include increased viscosity, color, and foaming, decreased smoke point, development of off odors such as acrid and burnt, and development of off flavors in the fried food (Warner, 2002). Physical and chemical reactions that occur during frying are represented in Figure 1. 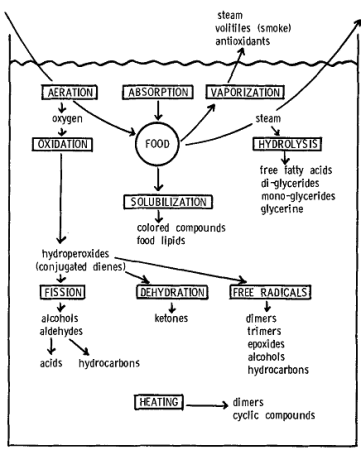 Products of decomposition formed during frying can be divided into two classes which are volatile and non-volatile products. Volatile decomposition products include aldehydes, ketones, alcohol acids, esters, hydrocarbon, lactones and aromatic compounds are removed from frying medium by steam generated during frying (Stevenson et al., 1984). On the other hand, the non-volatile decomposition products eventually produce physical changes in frying oil such as increase in color, foaming, and viscosity (Perkins, 1967). Their formation is due largely to thermal oxidation and polymerization of the unsaturated fatty acids in the frying medium. When oil is heated in air, it first shows a gain in weight as oxygen is absorbed, and its peroxide value may increase and when heating continues, the peroxides will decompose, and scission products start to distil off, leading to a net loss in weight (Perkins, 1967; White, 1991). Hydroperoxides may undergo further degradation of three major types: (a) fission to form alcohols, aldehydes, acids and hydrocarbons, thereby also contributing to the darkening of the frying oils and flavors; (b) dehydration to form ketones; and (c) free-radical formation of dimers and trimers, leading to polymers, all of which contribute to viscosity increase (Lalas, 2008). According to Artman (1969), conjugation of the double bonds and the accumulation of oxygenated products increases the ultraviolet absorption of the oil and iodine value of the oil may decrease later during frying due to the double bonds are consumed in various reactions. Hydrolysis is caused by moisture in fried foods resulting in the formation of free fatty acids (FFA), monoglycerides, diglycerides, and glycerols. FFAs may also be formed during oxidation due to cleavage and oxidation of double bonds (Perkins, 1967).