An enzyme is a biological catalyst that accelerates specific chemical reactions. It converts substrates into specific products. Most enzymes are proteins and hence have a three-dimensional structure of folded polypeptide chains. Enzymes have an optimal temperature and pH range in which they function most effectively. If changes occur that remove the enzyme out of this range it may not function effectively. This principle forms the basis of this experimental design where the increasing temperature results in the denaturing of the enzymes found in bromelain and thus lowering its catalytic effectiveness.

Bromelain is a protein extract present in the fruit, leaves and stems of pineapple plants (Ananas comosus). Although it is present in all parts of the pineapple plant, the stem is the most bromelain rich part that also makes it the most common commercial source of bromelain (Rowan, Buttle & Barrett, 1990, p.869-875)1.

The crude aqueous extract from the pineapple fruit is known as bromelain. It is in fact a mixture of different thiolendopeptidases and other components like phosphatases, glucosidases, peroxidases, cellulases, glycoproteins, carbohydrates and protease inhibitors (Maurer, 2001, p.1234-1245)2. It is also known that the enzymes in the bromelain extract begin to denature when heated over 80°C (Jutamongkon & Charoerein, 2010, p943-948)3. Since bromelain is essentially a mixture composed of many different enzymes, its substrate spectrum is very broad. It extends from synthetic low molecular amides and dipeptides up to high molecular substrates such as fibrin, gelatin, casein and bradykinin (Cooreman, 1978, p.107-121)4. Pineapples are an excellent source of the trace element manganese which acts as an essential cofactor for many of the enzymes found in bromelain. In addition, thiamine also acts as a cofactor in enzymatic reactions central to energy production in bromelain (Joy, 2010, p.670-686)5.

Historically, bromelain has been extracted and utilised for medicinal purposes by the natives of South and Central America. In modern society, bromelain has been proven to be effective at tenderising meat and as such, is sold commercially as powdered meat tenderisers. It has also earned universal acceptability as a phytotherapeutical drug because of its history of safe use and no side effects. In 1972, conclusive evidence that bromelain prevents aggregation of blood platelets was reported by Heinicke et al (1972, p.844-845)6. Bromelain also displays an anti-inflammatory and analgesic effect on soft tissue injuries especially in rheumatoid arthritis and osteoarthritis. It has also been found to dramatically reduce post-operative swelling and pain due to these properties (Leipner, Iten & Saller, 2001, p.779-789)7. Additionally, bromelain applied topically as a cream in a lipid base has shown beneficial characteristics in the debridement of eschar from severe burns and in the acceleration of healing. It has been commercially approved in Europe and sold under the trade name NexoBrid (Hauck, Chang & Klein, 1983, p.124-134)8.

This experiment aims to qualitatively identify the enzyme functioning found in commercially sold canned pineapple juice using background information provided by previous experiments. The rate at which gelatin is degraded in this experiment by the bromelain provides an indication of the rate of enzyme activity. The fresh pineapple sample is known to be rich in bromelain and as such, will hypothetically result in a significant amount of gelatin degradation. Boiling the pineapple juice sample over 80°C will result in the denaturing of enzymes and should display little to no degradation of the gelatin. The canned sample in question may not display any degradation as it has undergone processing that may have disturbed the natural functioning of the enzymes in bromelain.

Part A: Determining the degree of enzymatic functioning in canned pineapple juice

Part B: Measuring the effect of temperature on enzymatic functioning in bromelain

Table 1 depicts data taken from part A of the experiment. Three trials were run for each type of juice to ensure reliable results. It is apparent that there is a large change in the diameter of the fresh pineapple juice samples compared to the other types tested. Whilst canned pineapple juice displayed a lower degree of change, the boiled sample however seemingly gained gelatin. The control sample did not display any changes in the diameter of the pit.

Figure 1. Step 1 of the proteolytic gelation phase (Part A) 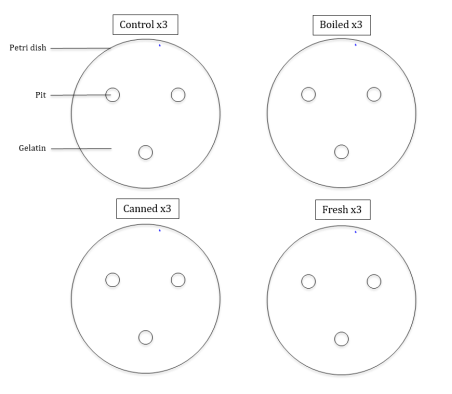 Figure 2. Step 3 of the proteolytic gelation phase (Part A) 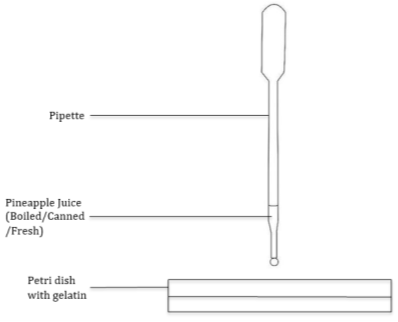 Table 2. Effect of temperature on enzymatic functioning in bromelain

Table 2 depicts data taken from part B of the experiment. Like part A, three trials were made for each variable to ensure reliable data. As temperature applied to the juice increases, it is evident that the degree of weight loss of the gelatin decreased. However, test tube 2 displayed a result that deviated from this trend as the weight loss (%) dropped then rose again. The control sample displayed the highest amount of weight loss of the gelatin cube. The trend (not inclusive of the control) is represented in the figure below.

Figure 3. Effect of temperature on enzymatic functioning in bromelain­­ 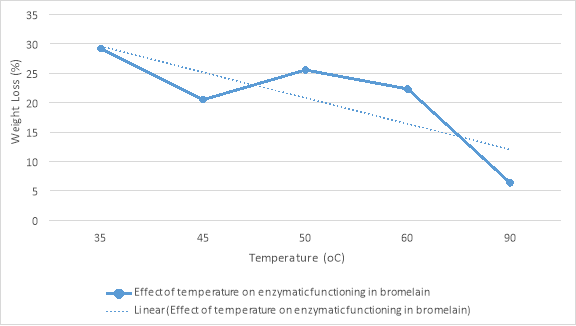 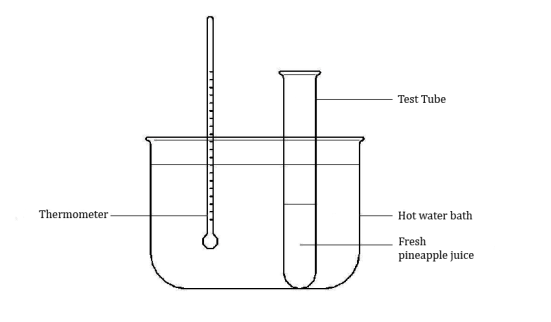 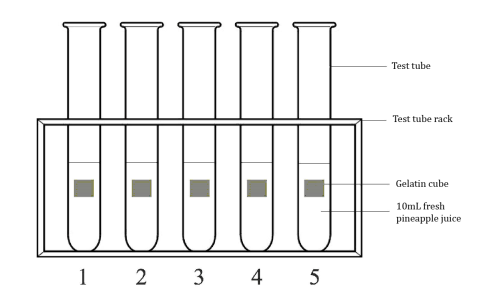 The boiled pineapple juice presented data that goes against the principle of bromelain breaking down gelatin. With a change in diameter of -1.18%, it has actually ‘gained’ gelatin after the proteolytic gelation phase. Since it is known that bromelain is responsible only for the degradation of gelatin, it is impossible for it to produce gelatin. Thus, this miscalculation may only have resulted from human error in marking and measuring the diameter. The marker used in this specific experiment produced rather thick lines relative to the small diameters that were measured. Use of a finer tipped marker may have minimised the chances of such inaccuracies to occur.

The control sample involved a set of gelatin plates with no pineapple juice added. This was made to ensure that the pineapple juice was responsible for the degradation of the gelatin. If the control displayed a change in the diameter of the gelatin pits, then the experiment would be deemed invalid as more than one factor contributes to the degradation of gelatin besides bromelain. In accordance to the results, the control group displayed no changes to the gelatin pits.

Part B of the experiment explores the effect of temperature on the enzymatic functioning of bromelain. From the data recorded in Table 2, an increase in temperature applied to the juice corresponds to the decrease in the functioning of the enzymes as depicted through the amount of weight the gelatin cube lost. This trend is illustrated in Figure 1.

Whilst there is an overall decrease in weight loss associated with increased temperature, there is an outlier at 45oC. Although this variable was repeated thrice, it still remained inconsistent relative to the data set. Such an error may have occurred with the apparatus provided on the day of the experiment where there were only three water baths provided (37oC, 50oC and 90oC). The experiment design took into account the equipment available that was provided in the laboratory manual that offered water baths at 35oC, 45oC, 50oC, 60oC and 90oC. Hence, maintaining the pineapple juice at 45oC and 60oC using the apparatus provided was the most probable cause of the error. In the case of the 45oC variable, it may have been heated too strongly that resulted in the denaturing of many more enzymes compared to at 50oC and 60oC. To improve upon this error, water baths with temperatures corresponding to those given in the laboratory manual should be provided to ensure accurate quantitative data.

As mentioned previously in the introduction, it is known from past experiments that the enzymes in bromelain begin to denature very quickly at 80oC (Jutamongkon & Charoerein, 2010, p943-948)3. This experiment confirms the statement as the 90oC variable experienced a steep decline in weight lost that indicates a large degree of enzyme denaturing.

This experiment on bromelain was performed by three persons including myself. The first part of this assessment task was performed individually as per instructions. After we completed this task, we got together and planned the experimental design. Each person was assigned a role in this activity where I was tasked with completing the risk assessment and drawing scientific diagrams. The other two collaborators were responsible for completing the methodology and the list of materials and equipment. When we had completed our tasks, we discussed each part together to come to a mutual agreement. Many modifications were made to all parts that were essential to keeping our experimental design valid. Designing this experimental protocol with my classmates was a pleasant experience as each one of us were committed and contributed to the project. During this part of the project, no significant difficulties were faced as we all worked through our tasks smoothly. To me, teamwork was already a notion that I valued strongly, however this activity of getting together and completing such a large amount of work in so little time has definitely set that notion in stone.

The approach to allocating tasks to different members was also done on the day of the experiment. An action plan was formulated with all the roles and times of the tasks that have been allocated and given to each member of the group. A great reason for doing this is so that we can minimise human error in repetitive tasks. For example, I had a role in heating the juices in the given hot water baths. If two of us were to heat it, one may have a different way of regulating the temperatures 45oC and 60oC (the temperatures not given) than the other member. Hence, we assigned such roles to be consistent with the method. It also maximises productivity so that all of us are working rather than one person work with the other looking on to see if they can help.

The specific tasks that I have been allocated on this day was majority of Part B of the experiment. I was tasked with cutting the gelatin cubes, weighing and recording their weights, pipetting of juices into test tubes and heating the juices. After gelatin cubes have been dropped in and timed by another member, I removed, washed and dried the gelatin for the weighing process. In between my tasks where I had time I lent my assistance to my team members. At the end of the experiment we packed up the equipment and cleaned the lab bench so that we can sit down and discuss our results. The only minor problem experienced in this teamwork was the action plan. Some of the times allocated to specific tasks were under or overestimated. Although this is not necessarily a problem as we were provided three hours to conduct our experiment, it resulted in the clumping up of tasks where one member waited for another to finish their task to continue his/her own.

Overall, I am very happy and satisfied with the outcomes of our team project (possibly the best team project I have ever had!). With minimal difficulties and great results, I would definitely proceed to approach teamwork like this in future projects. However, this method of teamwork is only suitable if all team members are committed to their roles. If one does not pull their weight and not complete their allocated roles, the group could fall apart. Hence, it would be best for me to find myself a group of dedicated individuals in future projects.