The industry for cut flowers has become worldwide and its market continues to grow every year (Sheela, 2008). Cut flowers are living organs composed of foliar and floral parts that are harvested and sold for ornamental purposes (Sheela, 2008). Because they are highly perishable commodities, their post-harvest longevity is significant in determining its value.

Flower longevity is the time taken for a flower to remain fresh-looking before they start wilting. There are many factors influencing flower longevity including temperature, light, supply of water and carbohydrates, humidity and the presence of plant hormones such as ethylene (Reid, 2009; Reid & Jiang, 2012). To control these factors, suitable post-harvest procedures during transportation, packaging and storage should be adopted. One common procedure used is to store cut flowers at low temperatures and in holding solutions containing sugar immediately after cutting (Reid, 2009; Abou El-Ghait et al., 2012). The most commonly used sugar is sucrose. Sucrose supplies the flowers with substrates for respiration and promotes adequate water relations (Elhindi, 2012; Ichimura & Hismatsu, 1999).

In this experiment, the effects of various concentrations of sucrose on the longevity of roses, orchids and chrysanthemums are observed so as to determine the best holding solution for each of the flowers.

Three different species of flowers (roses, orchids and chrysanthemums) were placed in five different holding solutions with varying concentrations of sucrose and the number of days taken for all floral organs to wilt in each holding solution was recorded. The results obtained are illustrated in the Table below.

Table 1: Number of days required for the various species of cut flowers to wilt in different holding solutions. 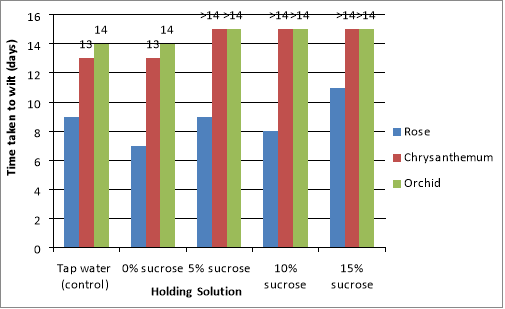 Figure 1: Graph showing the number of days for the roses, chrysanthemums and orchids to wilt in the different holding solutions.

From these results, it can be seen that the orchid has the highest longevity followed by chrysanthemum and finally the rose. Furthermore from the five different holding solutions, the one with 15% sucrose is more effective, with the least effective being the 0% sucrose holding solution.

As the flowers wilted, discoloration of the petals and drooping of both flowers and leaves were first observed. Afterwards, the petals of the flowers began browning at the edges and eventually as wilting progresses, the entire petal turned brown. This was apparent in both the roses and chrysanthemums but less so in orchids. In the final stages of wilting, the flowers became dry and crisp.

Physiological changes that lead to early wilting is caused by the inability of the flower to maintain photosynthesis due to diminishing sugar stored in the stem and petals (Jowkar & Salehi, 2006). Another reason is the formation of emboli and bacterial plug at the base of the stem during cutting that leads to reduction in water uptake (Van Meetern et al., 2001; Reid, 2012). To overcome this, stems are cut once again under water as done in this experiment (Reid, 2009).

To delay the wilting process, a post-harvest procedure that involves placing the cut flowers in a holding solution containing water to preserve turgidity, sucrose and an acidifying agent such as vinegar is carried out (Sheela, 2008; Reid, 2009). Sucrose functions as a source of energy that provides additional substrates to the flowers for respiration (Pun & Ichimura, 2003). An increase in respiration rate, increases flower longevity. Sucrose also promotes bud opening of cut flowers such as roses by supplying food for petal expansion (Pun & Ichimura, 2003). Furthermore, low concentrations of sucrose help maintain water balance in flowers. Sucrose decreases water loss in rose petals and increases the uptake of water, by inducing the closure of stomata and increasing the osmotic concentration of the flowers respectively (Elhindi, 2012; Pun & Ichimura, 2003). The concentration of sucrose to be used differs depending on the species of flowers being treated and often ranges between 5 to 20% (Nenguwo, 1998).

Vinegar in the holding solution reduces the pH to 3 or 4 so as to encourage the uptake of water since water with a low pH is easily taken up by the stem as compared to water with a higher pH (Clark et al., 2010). Acidifying the holding solution with vinegar also reduces the growth of bacteria and removes minerals in the solution that interferes with water uptake (Nenguwo, 1998; Clark et al., 2010).

Between the three types of flowers, it was found that roses had the shortest flower longevity, with a recorded maximum longevity of 11 days in 15% sucrose holding solution. The short vase life of roses is caused by water stress as a result of a quick loss in fresh weight, incomplete opening of the bud and the inability to maintain turgidity (Thwala et al., 2013). Roses tend to lose more water as compared to other flowers because of its petals being thinner and having a larger surface area (Jones, 2001). In addition, inadequate transport of water through the neck of the flower causes it to droop (Thwala et al., 2013). As the loss of water continues without being replaced, the flower begins to wilt and eventually drops off. Aside from water stress, the plant hormone ethylene causes the early wilting of roses. Rose cultivars that give of fragrances, produces more of the plant hormone ethylene. Being sensitive to this hormone, premature wilting and the failure of bud opening occurs (Jones, 2001).

Based on Figure 1, chrysanthemums placed in tap water and 0% sucrose wilted by the 13th day while the others took more than 14 days to wilt. This shows that chrysanthemums have longer flower longevity than roses. One reason for this is because unlike roses, chrysanthemums are relatively insensitive to ethylene (Jones, 2001). Another reason is that despite having thin petals, it has a smaller petal area and so less water is loss. The shorter flower longevity in tap water and 0% sucrose holding solution as compared to the other holding solutions suggest that the presence of sucrose does increase the vase life of chrysanthemums.

Like chrysanthemums, the rate of water loss in orchids is considerably low. This may be due to the fact that even though they have large petal areas, their petals are thicker than that of roses and chrysanthemums. Additionally, unlike in roses, the orchid stems lack supporting leaves and because of this the orchid has greater flower longevity as seen in this experiment (Thwala et al., 2013). One other reason for their flowers being long-lived is because they have low pollination rate and specialized pollination systems which causes them to be pollen-limited (Abdala-Roberts et al., 2007). As a result, the senescence of flowers in orchids is linked and tightly controlled by pollination.

After comparing the effects of the five holding solutions on longevity, the 15% sucrose holding solution demonstrated the most prolonged longevity in all three flower types. The high concentration of sucrose in this solution means that it is able to provide sufficient nutrients for flower maintenance.

Flower longevity is dependent on a number of external factors such as temperature, carbohydrate and water supply, light and the plant growth regulators. Therefore, the addition of acid such as vinegar and sucrose are used to help in prolonging the vase-life of cut flowers. From the results of the experiment conducted, it can be concluded that the 15% sucrose solution acidified with vinegar is the most ideal to be used as a holding solution for cut flowers. In addition, it was found that chrysanthemums and orchids have similar flower longevity which is much longer than that of the rose. This may be due to differences in ethylene sensitivity and regulation of senescence and wilting. Since cut flowers are one of the most perishable commodities, conducting this experiment helps florist determine the most suitable holding solution to prolong flower longevity for a particular cut flower.