The Effect of the Enzyme, Alpha-galactosidase inside Beano, on the Digestive System 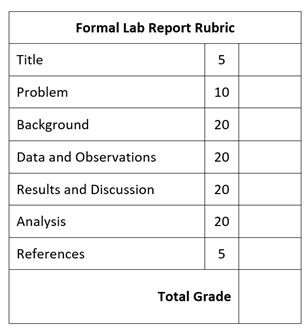 The human body has several complex systems that fulfill essential goals the human needs to survive. Each system has a different procedure for the body and works individually or with other systems to perform that action. One of the human body systems is the digestive system. There are several steps that come into play when discussing the system, but in short, the digestive system turns the food that humans eat into energy. In the digestive system, parts and organs include salivary glands, pharynx, esophagus, stomach, small intestine, large intestine, rectum, liver, gallbladder, and pancreas. “Digestion is the breakdown of large food particles into smaller molecules that are easy to absorb into the bloodstream” (Gureco, 2015).This experiment focuses solely on the transfer of glucose from food consumed into the body. What does this food do for the human body? The path of the food being digested is as followed. When food enters the mouth saliva helps break it down. It goes down the esophagus and enters the stomach where it is broken down further by acid in order to be able to extract nutrients from the food. It enters the small intestine where the nutrients are absorbed and goes through the large intestine where water is absorbed in order to create a stool (defecation) so that it can exit the body via the anus.

Digestion occurs in which the “rate and extent of sugar release from available carbohydrates, by simulating physiological processes occurring in the mouth, stomach and small intestine” (Woolnough, 2010). The focal point of this experiment is to examine the glucose concentration with the help of alpha-galactosidase which all takes place in the path of digestion. To start off, the food (or food solution) used in this experiment was a solution of broken down refried beans. The enzyme Beano was used specifically for this experiment because, as the name suggests, Beano is made specifically for digestive assistance with beans. Beans have a tendency to cause “stress” in the human digestive system. The Beano was used with the refried beans to digest the beans easily. This allows an easy pathway for the glucose to be broken down and for the human body to absorb the glucose. According to a journal abstract written by RJ Levin, “The glucose, galactose, and fructose produced are absorbed across the enterocytes [cell of the intestine] of the upper half of the villus [increase of surface area in order to absorb more nutrients]” (Levin, 1994) In more specific terms, foods are carbohydrates called “oligosaccharides”. In the case of this experiment, refried beans were used as the oligosaccharides. Oligosaccharides are groups of two to ten monosaccharides bonded together to form the carbohydrate. When entering the body, the enzyme called “salivary amylase” (most commonly known as human saliva) starts the chemical process of digestion of food. The enzyme breaks down the oligosaccharide carbohydrate polymers into monomers called monosaccharides. When oligosaccharides are broken down by digestion, a monomer called monosaccharides are produced. This is because multiple saccharide polymers are broken down into a simple sugar. Included in a human’s digestive system are living microbes in the large intestine that carry out the process of breaking down the carbohydrates. These microbes in human intestines are necessary because the body needs to break down the food into monosaccharides to obtain the nutrients needed for processes such as cell repair, growth, and most importantly energy. The breaking down of the oligosaccharides are essential because “The biological roles of oligosaccharides appear to span the spectrum from those that are trivial, to those that are crucial for the development, growth, function or survival of an organism” (Varki, 1993). However, the refried beans mentioned have starch in which these microbes produce an uncomfortable and bloated feeling like the aforementioned “stress” that beans cause. Although the following experiment was done on a different species an abstract suggests that mammals that consume soybeans “may suffer from a gastrointestinal hypersensitive reactions involving major disturbances in digestive functions” (Sissons, 1982). The use of Beano in this experiment examines the effect of the alpha-galactosidase at varying temperatures as the independent variable which assists the digestion of refried beans. The alpha-galactosidase is used to pinpoint the temperature in which glucose concentration is high or low as the dependent variable. 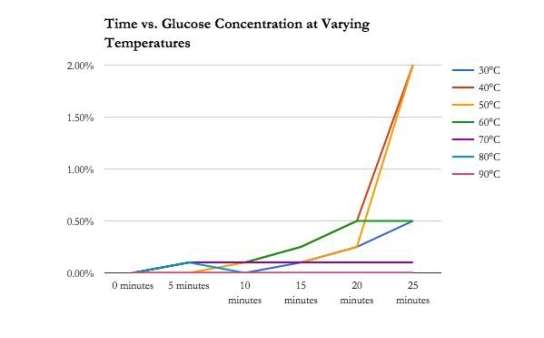 The graph illustrates several temperatures in which the solution of Beano and refried beans were tested. Similarities and differences can be observed across multiple of the Beano solution mixtures at the varying temperatures. Some of the lines that represent each temperature stand out more than others. It can clearly be seen that relatively high temperatures of the refried bean solution and Beano cannot extract much glucose from the solution itself. High temperatures that did not have a high glucose concentration included temperatures that ranged from 60oC to 90oC whose maximum glucose concentration did not reach over 0.50%. This outcome can also be predicted for any temperature higher than those experimented with because if 90oC did not extract any glucose, anything higher will do the same. The same outcome can be seen with the lesser temperature of 30oC, in which the concentration of glucose did not reach over 0.50% in the course of 25 minutes. Relatively high and low temperatures of refried bean and Beano solution extracted glucose at a lower rate or did not extract any glucose at all.

In comparison, two temperatures of the solution stood out more than the others. The Beano solution skyrocketed at temperatures of 40oC and 50oC. It is clear that these two temperatures were different from the others. The reason behind it? Well the optimum temperature for digestion ranges from 37oC and 44oC. Relatively close to the aforementioned temperatures of the solution, is it not? This is because body temperature is approximately 37oC and this is the temperature in which the body functions best. Temperature gets too hot? Humans get a fever. Temperature gets too low? Humans start to internally develop hypothermia. Both indicate that the body is not fully functional. The temperature of 37oC is closer to 40oC than it is to 50oC. Figure 1 indicates that the Beano solution at 40oC had a higher slope which exemplifies the fact that digestion works best when near the body temperature of approximately 37oC. According to a news website, “The body has sensors with memory, or it’s linked to the brain, and immediately it sense the food in the stomach has temperatures and pH outside the optimum range, it uses the energy and acids stored in the body to regulate the right conditions for the optimum digestion.” This further exemplifies why the Beano solution of 40oC and 50oC worked best compared to the other five temperatures. The experiment proves the efficiency and effectivity of alpha-galactosidase inside Beano impacts the rate of glucose concentration of refried bean solution at varying temperatures of 30oC to 90oC.

The enzyme called “salivary amylase” breaks down these carbohydrate polymers called oligosaccharides into monomers. Salivary amylase, which is also known as saliva, breaks down starch when chewing food. As food is consumed, saliva inside the mouth starts the process of digestion by breaking down the food as humans chew. This allows the food to be broken down for glucose extraction and also breaking down the food for the esophagus. If food were not to be chewed, it cannot enter the esophagus and if it does, it will be difficult to swallow which can lead to respiratory injuries.

In the human body, intestines have microbes that fulfill certain needs for the digestive system. These microbes in human intestines are necessary because the body needs to break down the food into monosaccharides to obtain the nutrients needed for processes such as cell repair, growth, and most importantly energy. In all, digestion is essentially important because of the advantages it gives to us in the form of energy. Without the energy produced from consuming, a human body cannot be fully functional.

On the contrary, Beano worked least efficiently on the refried beans at an approximate temperature of 90oC. The reason behind this is that 90oC is way too hot for digestive organs to obtain nutrients. In turn, glucose cannot be absorbed which explains why the line in Figure 1 which represents 90cC did not increase throughout the course of the entire twenty-five minutes.

Alpha-galactosidase is a glycoside hydrolase enzyme that is inside Beano extract to make it work. The enzymes in Beano helps with digestion, bloating, and reducing gas by increasing the rate of digestion. In the experiment, Beano was mixed with refried beans to increase the rate of glucose extraction from the beans.

When experimenting with different independent variables, it is better to have all lines on the same graph. Why? Well the graph of Figure 1 was used to compare different glucose concentration at different temperatures. Mentioned several times before, about 40 degrees Celsius worked best because it is body temperature. In this case, the line that represented 40oC can be compared to the other varying temperatures because of the fact that all of the lines were put on the same graph.