Acetylcholinesterase (AChE), an enzyme responsible for the synaptic termination of impulse transmission by the rapid hydrolysis of the acetylcholine (ACh), a neurotransmitter of the central and peripheral nervous systems1. By breaking down ACh at the synaptic cleft, the next nerve impulse cannot be transmitted across the synaptic gap as AChE effectively stopping the signal2. However, inhibition of enzyme activity, leads to ACh accumulation which further causes an increase in the motor activity in the gastrointestinal tract, disrupted neurotransmission and hyper stimulation of nicotinic receptors1. AChE has long been the primary target of inhibitors for the rational drug design and for the treatment of diseases such as Alzheimer’s disease. These inhibitors can be broken down into two groups, irreversible which are associated with toxic effects and reversible which have therapeutic applications. The level and duration of the neurotransmitter action can be increased by inhibiting the cholinesterase enzyme from breaking down ACh with the use of reversible AChE inhibitors. Some examples of reversible inhibitors are Donepezil, Rivastigmine and Galantamine. On the other hand, irreversible inhibitors such as Diazinon, Phosmet and Diamethote will cause an inhibition of AChE and prevent the breakdown of ACh.

Caffeine, a known reversible inhibitor of AChE, can interfere with ACh neurotransmission. In the brain, caffeine has an effect on the delicate balance of nerve transmission by increasing the level of ACh3. Caffeine can also block adenosine receptors. Caffeine (1,3,7-trimethylxanthine) is a polar compound consisting of two amide groups, a purine group, and a tertiary amine4. (Figure 1).

Potential Importance of Curcumin Towards Inhibition of Acetylcholinesterase

Curcumin is a natural product of the rhizome of Curcuma longa (turmeric), an herb that belongs to the ginger family, Zingiberaceae and usually found in tropical climates in South Asia and India. Multiple signaling molecules have been shown to be the target of curcumin, a polyphenol which has multiple health benefits due to its activity at the cellular level. Curcumin has been widely studied due to its anti-inflammatory, antioxidant and anticancer properties in vivo and in vitro model systems5.In terms of its anticancer properties, at different stages of cancer development, Curcumin inhibits proliferation of a wide variety of tumor cells through regulation of multiple cell signaling pathways6. Also, due to its antioxidant and anti-inflammatory effects, curcumin has been shown to therapeutically benefit metabolic syndrome, degenerative eye conditions, the kidneys, hyperlipidemia, and aid in the management of inflammatory conditions5. Curcumin’s potential to treat Alzheimer’s disease and arthritis, is attributed mainly to its chemical structure.

Curcumin is similar to the known AChE inhibitor, rosmarinic acid, in that they both have two phenolic groups, except on each phenol ring, curcumin consist of methoxy group and rosmarinic acid consist of another hydroxyl group (Figures 2 and 3). Also, rosmarinic acid has an ester, a carboxylic acid group and is asymmetrical while curcumin has two enone groups which consists of an alkene conjugated to a ketone and is symmetrical (Figures 2 and 3). Despite these differences, both rosmarinic acid and curcumin possess antioxidant and anti-inflammatory properties yet able to bind uniquely and inhibit the activity of AChE7. Curcumin can favorably interact with both the quaternary and peripheral sites of AChE due to the presence and distance between the two aromatic rings. The curcumin-AChE complex can be stabilized by the formation of hydrogen bonds with the quaternary and acyl sites8. Curcumin can be extracted from Turmeric available at Walmart, known as “Amira Turmeric Ground” with a cost of $1.17/40g9. Curcumin can be isolated from its natural source and whether it is a novel inhibitor of AChE will be discovered from further studies. 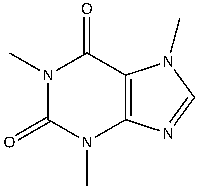 Figure 1: The chemical structure of caffeine, a known inhibitor of acetylcholinesterase (AchE). Caffeine (C8H10N4O2), a polar alkaloid compound that consists of a purine group, alkene, tertiary amine and two amide groups. Caffeine is capable of forming hydrogen bonds and in this molecule london dispersion forces and dipole dipole forces are also present.

Figure 2: The chemical structure of curcumin, a natural product and a potential inhibitor of acetylcholinesterase (AchE) The formal chemical name of Cumerican is (1E,6E)-1,7-bis(4-hydroxy-3-methoxyphenyl)-1,6-heptadiene-3,5-dione, with chemical formula C21H20O6. Curcumin is a symmetrical, polyphenolic molecule that is also known as diferuloyl methane. Three chemical constituents are involved in its structure; two aromatic ring systems containing ortho-methoxy phenolic groups (each composed of an ether and phenol) connected by a seven-carbon linker consisting of an α, β-unsaturated β-diketo moiety (2 enones, each composed of an alkene conjugated to a ketone)10.

Figure 3: The structure of rosmarinic acid, a known inhibitor of acetylcholinesterase.

Rosmarinic acid (C18H16O8) structurally is a 3,4-dihydroxyphenyllactic acid and a dimer of caffeic acid, bound by an ester linkage11. Carboxylic acid, two phenols, an ester, alkene and an additional hydroxyl group on each phenol ring are present in this asymmetrical molecule.

(FIGURE). Curcumin’s antioxidant property is from its structural features which are the methoxy and the phenolic group on the phenyl ring and the 1.3- diketone system.5

Curcumin’s antioxidant property is from its structural features which are the methoxy and the phenolic group on the phenyl ring and the 1.3- diketone system.5