Theory: In this experiment, three reactions total were performed. One of which was oxidation, and the other two were reduction. The overall result in this experiment was that 4-t-butylcyclohexanol was oxidized and reduced back to an alcohol through two different reactions that gave the same products. In order to oxidize 4-t-butylcyclohexanol, sodium hypochlorite was used, along with acetic acid. Acetic acid was used to protonate the hypochlorite which would then protonate the alcohol group of the reactant. As a result, the hydroxyl group with the extra hydrogen became a great leaving group, allowing hypochlorite, a nucleophile, to attack. This allowed a base, such as water, to deprotonate a hydrogen and create a double bond with the oxygen bond, which allowed the chlorine to leave. Overall, this reaction produced 4-t-butylcyclohexanone as the product.

After the oxidized product was created, two different types of reduction were used to reduce the product created from oxidation. Two reagents used in each reduction reaction were sodium borohydride and aluminum isopropoxide. Both reagents would create similar products; however, the ratios of diastereomers were different. For sodium borohydride, the hydrogen would attack the carbonyl of 4-t-butylcyclohexonone and create a negative oxygen. Ethanol would act as a proton source in the solution and protonate the oxygen, which created a hydroxyl group.

On the other hand, the reduction reaction that involved aluminum isopropoxide had a different mechanism. The carbonyl group of the 4-t-butylcyclohexonone would attack the partial positive aluminum due to the electronegativity of the oxygen. A hydrogen would attack the double bond of the carbonyl group and carry electrons over and allow the oxygen to have two pairs of electrons. As a result, the bulky group of the reactant would leave by an addition of hydrogen to the molecule, which created 4-t-butylcyclohexanol. Overall, both different reagents provided the same results. However, the ratio of diastereomers was determined by the structure of the reagents.

In order convert the carbonyl group into an alcohol, a bond must be formed at 107° angle. By looking at the structure of the hexane ring, the molecule can be attacked at two different sides. On one side, there were hydrogen that can provide steric hindrance; whereas, the other side would be free. Aluminum isopropoxide was a bulky group that will not likely to attack the 4-t-butylcyclohexanone at the side that has hydrogen. Hence, it would attack the side that had greater room. As a result, there was a higher ratio of an axial attack, compared to an equatorial attack of hydrogen. On the other hand, sodium borohydride was not a bulky group; thus, the ratio of axial and equatorial attacks would be more equal. 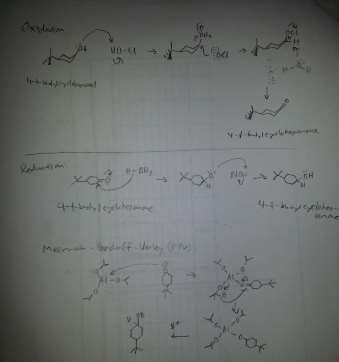 Discussion: The three reactions completed during the experiment were successful. By doing a TLC test every several minutes helped indicate the completion of the reactions and ensured that no reactant were present. The first two parts that required TLC testing showed the comparison between the starting material and the reaction mixture. Since TLC was based on polarity and the distance traveled, the completion of the reaction were focused on the distance of the spots and whether the initial spot disappeared after the reaction took place. The two main compounds were 4-t-butylcyclohexanol and 4-t-butylcyclohexanone. In order to analyze these two compounds, the polarity between them was different. The former compound had an alcohol group that was able to form hydrogen bonds; whereas, the latter compound cannot. Therefore, the former compound was more polar than the latter. In the case of the TLC testing, 4-t-butylcyclohexanone that was created from oxidation in part A, would travel farther on the TLC plate. Indicated in the data obtained, no reactant was left after the reaction, which indicated the completion of oxidation.

On the other hand, the TLC test in Part B showed the same result. The product, 4-t-butylcyclohexanol was expected to travel less due to its polarity. Also, the final result showed that no reactant was present, indicated by the absence of the spot compared to the spot of the starting material. On another note, isopropyl alcohol was used to eliminate the excess of hypochlorite in Part A. By reacting hypochlorite and isopropyl alcohol, acetone and water were produced. Hence, hypochlorite was used to oxidize isopropyl alcohol in order to create acetone, which was a solvent that would interfere with the reaction; thus, it provided no harm and affect the results.

The percent yield was decent for part A and was low for Part B and C. Possible reasoning for this could be that the products were lost during the extraction. It was not likely that the issue resided in the reaction itself because TLC testing indicated that all the reactants were used up. Hence, it was more likely that the extraction process may account for the loss of products. On another note, the ratio of trans/cis of the commercially obtained alcohol mixture seemed to be 1:3. Additionally, the standard ratios of the stereoisomers were almost the same compared to the HNMR spectrums obtained from the experiment. Since the ratio was 1:3, the method most likely used to synthesize the 4-t-butylcyclohexanol was the Meerwein-Pondorff-Verley Reduction.

Sources of Errors: No major errors occurred during the experiment. One possible error that may account for the low recover of product would be the extraction. The extraction process went too fast, which may cause some products to be lost in the aqueous layer. However, the aqueous layer was extracted once more, which can minimize the loss of products. This was a possibility.

Conclusion and Future Experiments: The results from the experiment concluded that Meerwein-Pondorff-Verley Reduction was the method used to synthesize the commercially obtained 4-t-butylcyclohexanol. Additionally, the products from reactions were successfully obtained from the completed reactions. Future experiments would include multiple attempts of the reactions in order to obtain a higher yield. Although, the results concluded the exact method used, more HNMR spectrums from additional experiments would provide credibility.