The cytochrome P450 (CYP) enzymes are a superfamily of haem-containing mono-oxygenases involved in the oxidative metabolism of a wide range of xenobiotics and endogenous compounds including steroids in the body.(40, 41) These membrane-bound enzymes are found primarily in the liver, sited in the smooth endoplasmic reticulum (SER) of hepatocytes.(42) CYPs are also found, to a lower extent, in extra-hepatic tissues such as the small intestine, kidney and lung where they carry out enzymatic biotransformation of foreign chemicals.(43)

In human liver, three main CYP families (CYP1, CYP2 and CYP3) are heavily involved in drug metabolism.(44) Phase 1 metabolism reactions such as oxidation, reduction and hydrolysis of substrates introduce functional groups into drug molecules. The intermediate metabolites then enter Phase 2 reaction which involves conjugation to produce inactive polar metabolites for elimination from the body.(30) Most P450 metabolisms deactivate substrates to form inactive intermediates for elimination; paradoxically, CYPs can convert substrates into active intermediates which contribute to cellular toxicity or carcinogenicity.(30, 43)

Figure 11: The microsomal monooxygenase P450 system. Cytochrome P450 incorporates one atom of oxygen to the substrate (RH), forming a hydroxylated product (ROH); and incorporates another atom of oxygen to form a water molecule. NADPH serves as a coenzyme in the system. The hydroxylated product can then undergo Phase 2 reactions to produce conjugates which are catalysed by a variety of enzymes such as gluthathione transferases.(43)

CYPs are involved in the metabolism of a wide range of substrates including carcinogens and anticancer drugs.(43) CYPs can convert anticancer drugs into inactive metabolites; or activate mitogenic compounds such as the oestradiol metabolite 4-hydroxyestradiol.(45) It was established that metabolism of the carcinogen benzopyrene by CYPs may generate products which can cause specific mutation in the p53 gene and initiate cancer.(46) The microsomal monooxygenase P450 system (MMO) generates ROS which, at high levels, can induce cellular oxidative stress which affects cancer cell proliferation.(47, 48)

Expression of individual CYPs were observed in different types of human cancers including breast cancer.(43) However the knowledge on the role of CYPs in cancer cells is limited. This has attracted increasing interest of experimentalists in the investigation of the effect of CYP-mediated metabolism in cancer cells. Over the years, overexpression of CYP1A1 and CYP1B1 are the most profound findings in the field of pharmaco-oncology.(44) CYP1A1 catalyses the metabolism of oestradiol to inactive 2-hydroxyestradiol for excretion from the body.(41, 49) In contrast, CYP1B1 mediates conversion of oestradiol to 4-hydroxyestradiol which is capable of producing ROS and contributes to breast carcinogenesis.(41, 49) Previous study has reported that oestradiol can regulate CYP1B1 expression in MCF-7 cells through ER-mediated pathway.(41)

Another study treated MCF-7 cells with aryl hydrocarbon receptor agonist which induces P450 enzymes to catalyse 4-hydroxylation of 17β-estradiol.(50) Higher CYP1B1 mRNA levels and increased hydroxylation activity of 17β-estradiol were observed in breast tumours. (50) This correlates with another study which had shown that CYP1B1 protein was absent in normal breast tissue.(51) 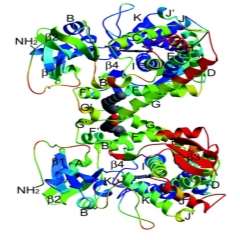 Figure 12: The structure of CYP2C8, a haemoprotein from the cytochrome P450 superfamily. Figure adapted from reference (54).

CYP2C8 is a member of the CYP2C subfamily which accounts for 7% of the total microsomal CYP content.(55) CYP2C8 mediates Phase 1 oxidative metabolism of about 5% of drugs in the liver.(55) Sited mainly in the endoplasmic reticulum of hepatocytes, CYP2C8 mRNA was also detected in extra-hepatic sites such as the kidney, brain, uterus and mammary gland.(56) In a study, 10 breast cancer tissue samples were analysed using specific primers for RT- PCR for the expression of CYP2C8.(57) Interestingly, CYP2C8 mRNA was detected in all the samples analysed.(57) Another study has detected CYP2C8 mRNA in breast cancer cells and CYP2C8 knockdown suppressed the growth of breast cancer cell lines MCF-7, T47D and MDA-MB-231.(58)

Anti-cancer drug Paclitaxel and carcinogen benzopyrene are the main substrates of CYP2C8 in enzymatic metabolisms.(43) CYP2C8 primarily catalyses 6α-hydroxylation of Paclitaxel, a mitotic inhibitor used in malignant tumour, into inactive metabolite for elimination.(59, 60) Results from several studies had shown that single-nucleotide polymorphisms (SNPs) in CYP2C8 gene, especially the CYP2C8*3 variant allele which is more common in Caucasians, results in alteration in CYP2C8 enzymatic activity.(61, 62)

Dai et al. had reported that subjects homozygous for CYP2C8*3 had decreased 6α-hydroxylation Paclitaxel metabolism compared to subjects with wild-type CYP2C8 gene.(62) As a result, although more likely to achieve therapeutic response from Paclitaxel treatment, breast cancer patients who are CYP2C8*3 carriers have a significant increased risk of neuropathy due to the narrow therapeutic window of Paclitaxel.(60, 61, 63) Besides, it was also reported that CYP2C8*3 variant caused defective metabolism of an endogenous CYP2C8 substrate, arachidonic acid, into epoxyeicosatrienoic acids which promote invasion in vitro and angiogenesis in vivo.(62, 64) In mice, overexpression of CYP epoxygenase in the metabolism of arachidonic acid had resulted in metastasis of MDA-MB-231 human breast cancer cells to the lungs associated with angiogenesis.(65)

In another study involving 652 breast cancer patients in Southern Sweden, CYP2C8 polymorphism was studied against early breast cancer-related events to investigate the impact of polymorphism on breast cancer-free survival after diagnosis. (64)The result had shown that CYP2C8*3 variant resulted in shorter disease free survival in 297 ER-positive patients with invasive tumours treated with Tamoxifen, probably due to the role of CYP2C8 in drug metabolism.(64) In addition, researchers also found out that CYP2C8*3 carriers with breast tumour larger than 20mm had more than twofold higher risk of lymph node involvement.(64) 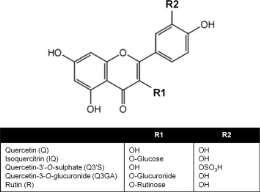 Figure 13: The chemical structure of the CYP2C8 inhibitor Quercetin and its derivatives. Figure adapted from (66).

Quercetin is a flavonoid found in a variety of polyphenols such as fruits, vegetables and plants.(67) As a competitive inhibitor of CYP2C8, Quercetin inhibits the 6α-hydroxylation of taxol catalysed by CYP2C8.(68) Quercetin was reported to inhibit cell proliferation of several human cancers such as leukaemia, gastric carcinoma and breast carcinoma.(68) Currently Quercetin is under Phase 1 clinical trial for anticancer treatment. (68)

Quercetin showed a dose-dependent inhibition on cell growth of ER-positive MCF-7 breast carcinoma which could be reversed by removal of Quercetin from culture medium or by addition of 17β-estradiol to the cells treated with Quercetin.(69) In another recent study, researchers had shown that Quercetin induces cell cycle arrest and apoptosis in a time and concentration-dependent manner in cell line MCF-7 (refer Figure 15).(67) The results had suggested that Quercetin might be a promising anticancer drug although its exact mechanism on inhibiting cell proliferation is not fully understood. Quercetin’s effect on CYP2C8 activity and ROS production might explain its role in inhibiting carcinogenesis.

Table 1: The effect of Quercetin on the cell cycle and apoptosis of MCF-7 cells shown in a study carried out by Deng et al. Quercetin inhibition on cell growth activity was dose-dependent. The concentration of Quercetin was also found to be positively correlated with apoptosis rate of the cells.(67)

Reactive oxygen species are the by-products of normal respiration process in the mitochondria.(70, 71) Apart from mitochondria, ROS is also produced from biochemical reactions that use oxygen molecules, such as the P450 monooxygenase system (MMO) in the endoplasmic reticulum.(70) Free radical ROS are highly reactive oxygen molecules which carrying an unpaired electron in their outer shell and seek for another electron in order to become stable.(72) Some examples of ROS include superoxides, peroxides and hydroxyl radicals.(72) A recent study had demonstrated increased intracellular ROS levels in MCF-7 and MDA-MB-231 cells following overexpression with CYP2E1.(48) This suggests that an alteration in the levels of the P450 enzymes might play a role in the production of intracellular ROS hence proliferation of cancer cells. 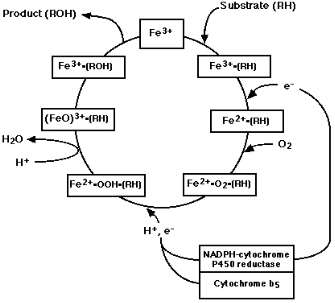 Figure 14: The monooxygenase P450 cycle. Binding of substrate (RH) leads to conformational change which favours the reduction of ferric iron (Fe3+) in P450. An addition of single electron from NADPH to P450 via NADPH-P450 reductase converts Fe3+ to ferrous iron (Fe2+). An oxygen molecule binds to the Fe2+RH to form the Fe2+O2.RH complex. Addition of a second electron from either the NADPH-P450 reductase or the cytochrome b5 and a proton form a Fe2+OOH.RH peroxide complex. The complex then accepts a second proton which leads to cleavage of the Fe2+OOH.RH complex into ferric oxene substrate complex, (FeO) 3+.RH and a water molecule. The ferric oxene extracts a hydrogen atom from the substrate to yield a pair of radicals Râ- and Fe2+OHâ-. The last step involves binding of Râ- with the hydroxyl radical OHâ- to generate the hydroxylated drug (ROH) to be realised from the complex. The P450 is then regenerated in its initial state.(73) Diagram adapted from reference (74).

At low levels, ROS maintains normal physiological functions such as modulation of signal transduction pathways and cell proliferation.(75) However high levels of ROS can cause cellular toxicity, lipid peroxidation, DNA damage, cell proliferation arrest and apoptosis.(76-78). The antioxidant defence systems in cells comprise of a group of antioxidant compounds such as Vitamin E, superoxide dismutase, catalase and glutathione peroxidase which function to cope with the high intracellular ROS levels. However, an excessive production of ROS or a lack of antioxidants can disrupt the balance and result in oxidative stress. (72)

Intracellular oxidative stress can cause DNA damage, endoplasmic reticulum (ER) stress and apoptosis.(77, 79) Oxidative stress caused by elevated levels of ROS is implicated in cancer as it is associated with alteration in DNA sequence which leads to activation of proto-oncogenes or inactivation of tumour suppression genes.(77) Such mutations may initiate cancer and provide malignant cells with advantageous characteristics as described in Figure 1 ‘Hallmarks of cancer’ to facilitate growth and metastasis.(25, 77, 80) Increased DNA base damage resulted from hydroxyl radical attack has been reported in inflammatory breast cancer.(81) 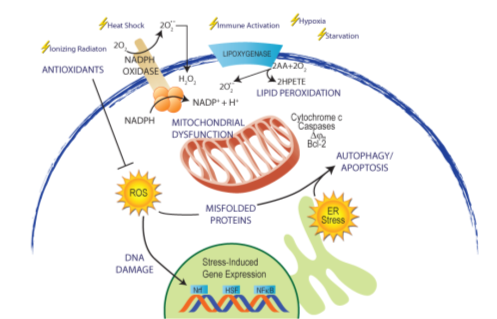