Workplace accidents are generally caused by the unsafe behaviour of employees and the unsafe state of objects (Shi Wenwen, et al., 2011). In the past, root causes of those accidents were reported mainly in terms technological malfunctions and the human element tended to be ignored (Gordon, 1998). Technology and systems have become more reliable and the frequency of technological failures has diminished, there is little uncertainty today that human errors contribute to the majority of safety incidents within high risk industries (Baysari, et al., 2009; Skalle, 2014).

The current research on the workplace accidents document that human errors are the root cause of up to 80% of incidents in high risk industries (Liping, 2003; Cullen and Anderson, 2005; Garret and Teizer, 2009; Ganguly, 2011; Quanmin, et al., 2011). As Reason (1997) indicated in an earlier research, it is expected, because human decisions and actions are not only involved in accidents, but also in the design, construction, operation, maintenance and management of complex systems.

The significance of human factors contribution to safety has been demonstrated over the past two decades by the often-quoted examples of the contribution of human failures to the major accidents within the process industry such as Bhopal, Piper Alpha, Texas City refinery explosion, Esso Longford gas explosion and Texaco Milford Haven explosion (Hughes and Kornowa-Weichel, 2004).

The term ‘human error’ is defined in several literatures (Norman, 1981; Reason, 1990; Sanders and McCormick, 1993; Salmon, et al., 2005). Reason (1990, p.9) defined human error as “a generic term to encompass all those occasions in which a planned sequence of mental or physical activities fails to achieve its intended outcome, and when these failures cannot be attributed to the intervention of some chance agency.” Salmon, et al. (2005, p.5) defined human error as “any mental or physical activity, or failure to perform activity, that leads to either an undesired or unacceptable outcome.” Dhillon & Liu (2006) and Shi Wenwen, et al. (2011) point out that the causes of human errors are complicated, and the basic reasons can be one’s own unsafe psychological activities, physiological factors, environmental factors, insufficient safety training, poor design factors and inadequate procedures.

The term ‘human factor’ is often referred as the thread that runs through the safety management system, the organisation for safety and the culture of a site (Cullen and Anderson, 2005). Cacciabue (2004, p.12) defined human factors as “the technology concerned with the analysis and optimisation of the relationship between people and their activities, by the integration of human sciences and engineering in systematic applications, in consideration for cognitive aspects and socio-technical working contexts.” The United Kingdom, Health and Safety Executive (HSE) defined human factors as “environmental, organisational and job factors, and human and individual characteristics which influence behaviour at work in a way which can affect health and safety” (HSE, 2005, p.5; Ganguly, 2011, p.14).

Hughes & Kornowa-Weichel (2004) and Cullen & Anderson (2005) highlight that it is important to integrate human factors from the early stages of process design and procedural development to reduce human failures. Hamilton, et al. (2013, p.5) state that “human factors integration is the principal method for applying human factors to the development of socio-technical systems across safety critical industries.” In this way, the integration helps to ensure that human factors methods and principles are applied appropriately and consistently during the system development in order to achieve a safe and effective design for end users.

McLeod (2004) indicates that human factors maturity assessment of an organisation should be in terms of what action organisation takes to minimise the human contribution to incidents and the impact on the health of the workplace through the way it designs the equipment and implements its associated training and procedures.

On the whole, the above discussed literatures put forward the claim that management systems, tools and equipment of an organisation to be designed with the potential capabilities and limitations of people in mind to run it safely and effectively as people are the integral and key features of the business systems. Therefore, the best practices of human failure prevention can only be attained when human factors are integrated into the procedural and system development phase rather than considering as a stand-alone activity. For this reason, the success rate of human failure prevention mostly depends on the level of human factors integration into the health and safety management system of that organisation.

Background to the organisation

Lamprell Energy Limited (LEL) is a leading provider of diversified engineering and contracting services to the onshore and offshore oil and gas and renewable energy industries. Based in the United Arab Emirates (U.A.E) and with the operations throughout the region, Lamprell has played a prominent role in the development of the energy industry within the Middle East for over 35 years. Lamprell has established a leading market position in the construction, commissioning and installation of rigs, process modules and top sides. The primary facilities of Lamprell are located in Hamariya, Sharjah and Jebel Ali all of which are located within the U.A.E. The facilities cover approximately 910,000 m2 with 2.2 km of quayside. The organisation employs approximately 2400 employees in the Jebel Ali facility where the research was conducted.

Reason for the dissertation

An analysis carried out on all the lost time, restricted work, medical treatment accidents and root causes reported in the last 3 years within the Jebel Ali facility of Lamprell reveals that the accidents caused by the human failures are at an alarming rate. There were no fatalities reported during this period within the organisation. It was confirmed that accidents are classified based on the similar reporting criteria across all three years to ensure consistency of collected data. 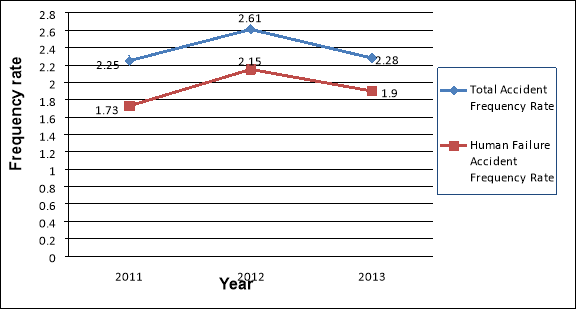 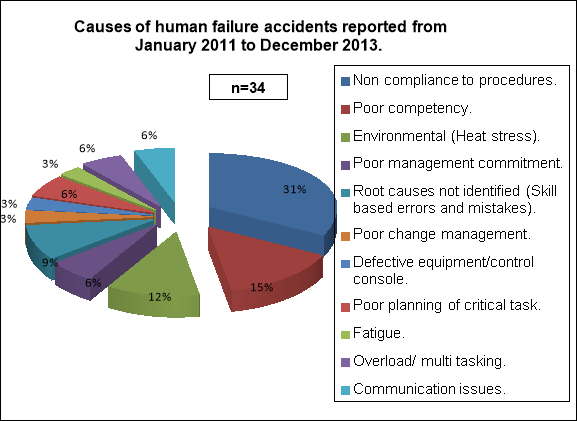 Figure 2. The causes of human failure accidents from January 2011 to December 2013.

As Figure 1 indicates, there was a rise in AFR in 2012 compared to 2011 and then dropped in 2013. Human failures contributed 76%, 82% and 83% to the total AFR in 2011, 2012 and 2013 respectively. The causes of these human failure accidents were retrieved from Lamprell’s Single Incident Reporting System (SIRS) and illustrated in Figure 2. The pie chart shows that over half the human failure accidents were due to the noncompliance of procedures, poor competency and environmental factors. The high human failure accident rate and the nature of the causes of these failures are self-explanatory for assessing the human factors integration into the health and safety management system of Lamprell.