The general model of nutrient cycling shows the main reservoirs relating to both the carbon and nitrogen cycles. Most nutrients accumulate in four reservoirs, each of which is defined by two attributes: whether it contains organic or inorganic matter and whether or not the matter is directly accessible for use by organisms. One section of organic materials is comprised of the living organisms themselves and detritus; these nutrients are available to other organisms when consumers feed and when detritivores (decomposers) consume non-living organic matter. The second organic section includes “fossilised” deposits of once-living organisms (i.e. fossil fuels, e.g. coal, oil, natural gas and peat), from which nutrients cannot be assimilated directly. Material moved from the living organic section to the fossilised organic compartment long ago, when organisms died and were buried by sedimentation over millions of years to become coal, oil, natural gas or peat. 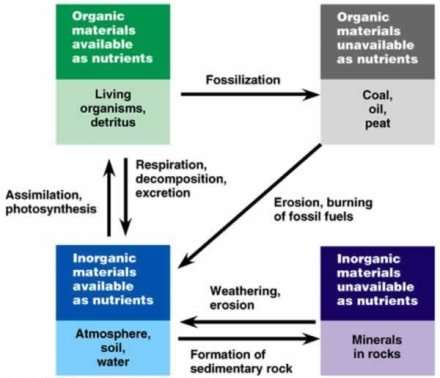 Herbivores and omnivores obtain carbohydrates and other more complex substances by consuming photosynthetic organisms and metabolise (chemically break down) the carbohydrates and complex substances into useful constituents for their own bodies/cells/molecules. Carnivores obtain these useful substances by eating herbivores/omnivores. Carbon dioxide is released back into the atmosphere when organisms undergo the process of cellular respiration; small amounts of CO2 are released into the air by the decomposition of dead organisms by the action of certain bacteria and fungi (detritivores): the majority of this CO2 returns to the atmosphere to be available for re-use in further photosynthesis.

Carbon-containing substances from photosynthetic organisms are required by animals and some microorganisms in order to produce energy and as a source of materials to drive many of their own biochemical reactions; this is essential to such organisms.

The reciprocal processes of photosynthesis and cellular respiration are responsible for the major transformations and movements of carbon. On a global scale, the return of CO2 to the atmosphere by respiration is closely balanced by its removal by photosynthesis. However, the burning of wood and fossil fuels adds more CO2 to the atmosphere; as a result, the amount of atmospheric CO2 is steadily increasing. 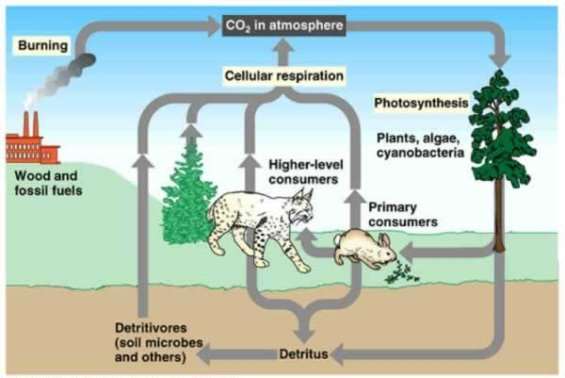 Not all carbon-based matter is immediately decomposed. Under certain conditions dead organic matter accumulates more rapidly than it is decomposed within an ecosystem. The remnants are locked away in subterranean deposits. Fossil fuels will be formed when deposits of sediment compress this matter; this process takes many millennia. Continuing geological processes may expose the carbon in these fuels to the environment after an extensive period of time, but mostly the carbon within the fossil fuels is liberated during human activities, e.g. use of fossil fuels for combustion.

Carbon, in the form of CO2, is the major greenhouse gas released to the environment/atmosphere as a consequence of human activities. The continuing discharge of greenhouse gases (CO2 is just one greenhouse gas) is causing the temperature of the earth to rise, disrupting the climate and affecting sea-levels. Sometime around the middle of the 18th century the industrial revolution began. Since then the concentration of CO2 in the atmosphere has increased by approximately 40% and will carry on increasing unless society reduces or eliminates the consumption of fossil fuels.

The exploitation of fossil fuels for energy has resulted in the rise in atmospheric CO2 concentrations. Additionally over 30% of the CO2 rise over the last 150 years came from transformations in land use. These include deforestation and the cultivation of land for food production.

The primary source of carbon/CO2 emissions from the Earth is as a result of tectonic or volcanic activity. Much of the CO2 released as a result of tectonic or volcanic activity is derived from the subduction of rocks including carbonate rocks. Much of the overall released CO2 was trapped when the Earth formed. Some discharged carbon remains as CO2 in the atmosphere; some is dissolved in the oceans; some is incorporated into organic molecules in living or dead/decomposing organisms, and some is trapped in carbonate rocks. Carbon is removed into long-term storage by burial of sedimentary strata (e.g. coal), that store organic carbon from un-decayed biomass and carbonate rocks e.g. limestone (calcium carbonate). The processes of tectonic movement and subduction release some of the CO2 through vents such as volcanoes (above and below ocean surfaces).

Although Earth’s atmosphere is almost 80% nitrogen, it is mostly in the form of nitrogen gas (N2), which is unavailable to plants and hence to consumers of plants.

Green plants absorb nitrogen in the form of nitrates dissolved in the soil water. They use these nitrates to make proteins or nucleic acids; these proteins or nucleic acids are passed along the food chain as herbivores eat plants and are then themselves eaten by carnivores. In this way the nitrogen taken from the soil becomes incorporated into the bodies of all types of living organisms.

The nitrates are returned to the soil in a number of ways. Urine contains urea, a breakdown product of proteins, and proteins are also passed out in the faeces, so the waste passed out of animals’ bodies contains many nitrogen-rich compounds. Similarly, when animals and plants die their bodies contain a large proportion of protein. Some of the detritivores that break down the waste products from animals and the bodies of animals and plants specifically digest the proteins. As detritivores break down the protein they excrete ammonium compounds. These ammonium compounds are then digested by nitrifying bacteria which excrete nitrates, which are returned to the soil to be absorbed by plants again.

By the time the microbes and other animals that feed on decaying organic material (detritus feeders) have decomposed the waste products and the dead bodies of organisms in ecosystems, all the energy originally captured by the green plants in photosynthesis has been transferred to other organisms or back into the environment itself as heat or mineral compounds.

A natural pathway for nitrogen to enter ecosystems is via nitrogen fixation. Only certain organisms (prokaryotes) can fix nitrogen, i.e. convert N2 to molecules that can be used to synthesise nitrogenous organic compounds e.g. amino acids. Prokaryotes are vital links at several points in the nitrogen cycle (see picture on next page). In terrestrial ecosystems nitrogen is fixed by free-living (non-symbiotic) soil bacteria as well as by symbiotic bacteria (Rhizobium) in the root nodules (also called nitrogen nodules) of legumes and certain other plants. Some cyanobacteria fix nitrogen in aquatic ecosystems. Organisms that fix nitrogen are fulfilling their own metabolic requirements, but the excess ammonia (NH3) they release becomes available to other organisms. 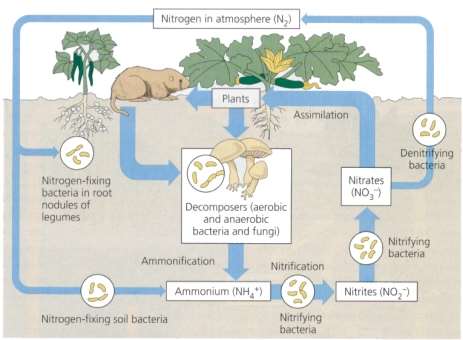 A major contribution in terrestrial and aquatic ecosystems to the pool of nitrogenous minerals is the industrial fixation of nitrogen for fertiliser: this is in addition to the natural sources of usable nitrogen.

The direct result of nitrogen fixation is ammonia (NH3). Since NH3 is a gas, it can evaporate back to the atmosphere. This local recycling of nitrogen by atmospheric deposition can be especially pronounced in agricultural areas where both nitrogen fertilisers and lime (a base that decreases soil acidity) are used extensively.

Although plants can use ammonium (NH4+) directly, most of the ammonium in soil is utilised by particular aerobic bacteria as a source of energy; their activity oxidises ammonium to nitrite (NO2–) and then to nitrate (NO3–); the nitrification process. Nitrate released from these bacteria can then be assimilated by plants and converted to organic molecules e.g. amino acids and proteins. Animals can assimilate only organic nitrogen, and they do this by eating plants or other animals. Some bacteria utilise nitrates, under anaerobic conditions, to obtain the oxygen they need for metabolism from rather than from O2. As a consequence of the denitrification process, some nitrate is converted back to N2, returning to the atmosphere. The process called ammonification, mainly carried out by bacterial and fungal decomposers, is the decomposition of organic nitrogen back to ammonium: this process recycles large amounts of nitrogen to the soil.

Overall, most of the nitrogen cycling in natural systems involves the nitrogenous compounds in soil and water, not atmospheric N2. Although nitrogen fixation is important in the build-up of a pool of available nitrogen, it contributes only a tiny fraction of the nitrogen assimilated annually by total vegetation. Nevertheless, many common species of plants depend on their association with nitrogen-fixing bacteria to provide this essential nutrient in a form they can assimilate. The amount of N2 returned to the atmosphere by denitrification is also relatively small. The important point is that although nitrogen exchanges between soil and atmosphere are significant over the long term, in most ecosystems the majority of nitrogen is recycled locally by decomposition and re-assimilation.