Cancer refers to a set of diseases characterized by the uncontrolled proliferation of cells into a different form against the normal complement of the organism (Kufe & Holland, 2003). There are two types of tumors; one is unremitting proliferation of cancer cells develops into tumor tissues and may multiply across to other organs via circulatory systems resulting in metastasis known as malignant tumors and second one those without malignant properties, which are self-limiting, noninvasive and do not metastasise, known as benign tumors. Around 90% of deaths from cancer are due to the metastases (Box & Html, 2008).

Cancer may concern humans of all ages. According to figures from World Health Organisation (WHO), cancer is the second most mortal disease after cardiovascular diseases. In 2010, around 5.5 million people in India were died due to cancer. 71% cancer deaths occurred in both men and women aged of 30-69 years. The three most common fatal cancers were oral (including lip and pharynx), stomach, and lung (including trachea and larynx) in men, and cervical, stomach, and breast in women. About 30% of cancer deaths are due to high body mass index, low fruit and vegetable intake, lack of physical activity, tobacco and alcohol use. Hence, the medical needs for cancer remain one of the most demanding areas in scientific research (Dikshit et al., 2012; Ferlay et al., 2007).

Cancers are first and foremost an environmental disease with 90–95% of cases due to modification in lifestyle and environmental factors and 5–10% due to genetics mutation (oncogenes, tumour suppressor genes and DNA repair genes). Cancer is caused by physical carcinogens (ultraviolet and ionizing radiation), chemical carcinogens (asbestos, components of tobacco smoke, aflatoxin and arsenic), and biological carcinogens (infections from certain viruses, bacteria or parasites). Common environmental factors leading to cancer death include: tobacco (25–30%), diet and obesity (30–35%), infections (15–20%), radiation, stress, lack of physical activity, and environmental pollutants. These environmental factors cause abnormalities in the genetic material of cells. There are certain risk factors for cancers which consist use of Tobacco, alcohol, unhealthy diet and physical inactivity are the main cancer risk factors worldwide (Rayl and Lewis, 2001; Bahls and Fogarty; 2002; Gibbs; 2003). Chronic infections from hepatitis B (HBV), hepatitis C virus (HCV) and some types of Human Papilloma Virus (HPV) are leading risk factors for cancer in low- and middle-income countries. Cervical cancer, which is caused by HPV, is a leading cause of cancer death among women in low-income countries (Newman and Cragg, 2007).

It is very unfortunate condition when cancer has been diagnosed; there are a number of treatments available. As cancer refers to a class of disease, it is unlikely that one single cure for all forms of cancer is possible (Pazdur, 2001; Illidge, 2008). The most common methods include surgery, chemotherapy (with one or more cytotoxic antineoplastic drugs), radiation therapy (ionizing radiation). There are other methods of treatment such as targeted therapies (monoclonal antibody therapy), immunotherapy (enhancing, or suppressing an immune response) and hormonal therapy (Goldenberg, 2002; Rosenberg et al., 1986; Byar and Corle, 1988). New methods, immunotherapy have the advantage to minimizing the adverse effects, in this targets specific antigen solely expressed by tumor cells, only target cancer and not the healthy cell population.

According to a report of World Health Organization, more than 80% of world’s populations depend on traditional medicine for their primary health care needs (Farnsworth, 1994; Duraipandiyan et al., 2006). Plants have a long history of use in the treatment of cancer and it is significant that over 60% of currently used anti-cancer agents are come from natural source. Naturally occurring drugs that are part of the war against cancer include vinca alkaloids (vincristine, vinblastine, vindesine, vinorelbine), taxanes (paclitaxel, docetaxel), podophyllotoxin and its derivative (etoposide, teniposide), camptothecin and its derivatives (topothecan, irinothecan), anthracyclines (doxorubicin, daunorubicin, epirubicin, idarubicin) and others. In fact, half of all anti-cancer drugs approved internationally were either natural products or their derivatives and were developed on the basis of knowledge gained from small molecules or macromolecules that exist in nature (Cragg et al., 2005; Cragg et al., 1997). In between 2001 and 2005, 23 new drugs derived from natural products were introduced for the treatment of disorders such as bacterial and fungal infections, cancer, diabetes, dyslipidemia, atopic dermatitis, Alzheimer’s disease and genetic diseases such as tyrosinaemia and Gaucher disease out of these 4 drugs have been approved as anti cancer agents. The approved anti cancer agents in 2002 doxorubicin, in 2002 estradiol, in 2004 cholorophyll and l- aspartic acid and taxol nanoparticles in 2005 (Butler, 2005). Three new drugs also introduced in 2007 originate from microbial sources for the treatment of cancer is marine alkaloid trabectedin, epothilone derivative ixabepilone and temsirolimus (Newman et al., 2003). Nature is an attractive source of new therapeutic candidate compounds as a tremendous chemical diversity is found in millions of species of plants, animals, marine organisms and microorganisms as potential anti-cancer agent (Bailly, 2009; Butler, 2004; Bhanot et al., 2011).

There were various biological mechanisms for controlling the cancer, out of it apoptosis and cell cycle inhibition are important one. Apoptosis is the process of programmed cell death (PCD) that may perhaps occur in multicellular organisms. In distinction to necrosis, which is a form of traumatic cell death that outcome from acute cellular injury, apoptosis generally confers advantages during an organism’s life cycle. Biochemical events escort to characteristic cell changes (morphology) and death (Furuya et al., 1994). There are numerous pathways and signals lead to apoptosis, but there is only one mechanism that in fact causes the death of a cell (Meikrantz W, Schlegel; 1995). Subsequent to a cell receives stimulus, it undergoes planned degradation of cellular organelles by activated proteolytic caspases. A cell undergoing apoptosis shows a distinguishing morphology (Alenzi; 2004):

Figure 1.1: Apoptosis in sequence: A) normal resting cell; B) cell volume is lost and chromatin clumped; C) blebbing process; D) chromatin collapsed to the margins of the nuclear envelope; E) nucleus clumped into a black hole; F) cell breaks down into apoptotic bodies; and G) apoptotic bodies ingested by macrophage.

Cell cycle consists of two successive periods, that characterized by DNA replication and isolation of replicated chromosomes into two separate daughter cells. The cell cycle divided into five phases: G0, G1, S, G2, and M. Cell division, or cytokinesis, occurs through the M (mi­tosis) phase, and is preceded by a prepa­rative phase, or interphase, that includes G0, G1, S and G2 (Fig. 2). DNA replication occurs in a specific part of the interphase, the S (synthesis) phase, which is preceded by a gap called G1, where the cell prepa­res for DNA synthesis, and followed by G2, during which the cell prepares for mitosis. 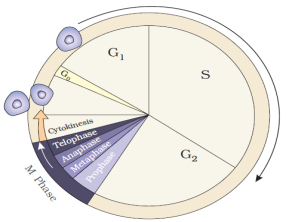 Figure 1.2: A diagrammatic view of cell cycle indicating formation of two cells from one cell

The vast preponderance of the cells are able to di­vide but do so only when appropriate to re­place damaged or dead cells. In fact, cells in G0 account for the major part of the non-growing, non-proliferating section of the human body, being essentially arrested in their growth. Cells in G0 can often be sti­mulated to enter the cell cycle by external growth signals such as growth factors and hormones that bind to cell surface recep­tors and then convey the signal from the plasma membrane to the nucleus, a pro­cess known as signal transduction(Sherr, 1994; Ostsubo et al., 1995; Cerveira et al., 2012).

In recent years, a large investigation on different classes of imidazo thiadiazoles has been done. Many of them were found to possess definite pharmacological activity. The fusion of a imidazole ring with a 1,3,4-thiadiazole nucleus give rise to a class of heterocyclic systems containing a bridgehead nitrogen atom known as imidazothiadiazoles. Imidazo[2,1-b][1,3,4]thiadiazole derivatives were first discovered in the early 1950s and, since then, the research work on heterocyclic system has led to significant developments in their chemistry and biology. The planar and rigid heteroaromatic imidazo[2,1-b][1,3,4]thiadiazole ring system have interesting physicochemical and biological properties, because of the presence of four hetero atom and two condensed heterocycles with different π-conjugation. Imidazo[2,1-b][1,3,4]thiadiazoles ring systems have been extensively studied and so far, a variety of biological activities have been reported for a large number of their derivatives such as antitubercular, antibacterial, anticancer, anthelmintic, antifungal, anticonvulsant, anti-inflammatory, analgesic, antipyretic, local anaesthetic, diuretic, antileishmanial and herbicidal activities. In addition, they have been reported to selectively inhibit several therapeutic receptors and enzymes, extending their applications in modern drug design (Jadhav et al., 2008).

So the present study was designed to evaluate the cytotoxic potential of the plant Aerva lanata L., isolation and characterization of phytoconstituents as well as preparation of their various novel derivatives as potential anticancer agents (Khazi et. Al., 2011).