We as human beings see germs and bacteria as doing more harm than good, it satisfies us greatly to know that we can utilize these germs and bacteria for a greater good. As the world becomes more modernised it is imperative that we find other sources of energy that is clean, renewable and readily available at an affordable cost. Nature is the original Microbial fuel cell as it has been converting organic substrates into energy (Adenosine triphosphate-ATP) since the beginning of time. Microbial fuel cells, technology that is still in its developing stages which uses the biochemical activities of microorganisms as a resource to obtain hydrogen create electricity. Using MFCs are very beneficial to the environment as it helps in the reduction of pollution and cuts the cost of water treatment tremendously. Apart from being an energy source, MFCs also has the potential to provide sustainable power sources to isolated communities and desalinate water. 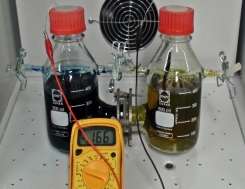 To most Microbial fuel cell would seem like something that is new to the world but the idea of utilizing microbes to produce energy was brought to the world in the early 1900s by Professor M. C. Potter. Potter used Escherichia coli and Saccharomyces to produce electrical energy at the University of Durham (Mercer, 2012 and Potter, 1912). During his studies, Potter discovered the ability to harness electricity from microorganisms and believed that this discovery would also benefit humans. Potter came up with the idea of creating a microbial fuel cell but lacked the knowledge of bacterial metabolism. Fast forward to the 1980s, M. J. Allen and H. Peters Bennetto further developed Potter's idea along with the interest in providing affordable electricity to isolated areas, advanced technology and a better understanding electron transport chain this enabled Allen and Bennetto to create a basic design for the first Microbial Fuel Cell.  Most bacteria are made up of a lipid membrane that lacks the ability to conduct electricity, Allen and Bennetto discovered that by using electron mediators to transport electrons to the electrodes a greater electrical output created (Davis and Higson, 2007).

Korean researcher B-H Kim discovered that some microorganism possessed electrochemical activity and did not require an electron mediator, this created a MFC that did not require mediators that were toxic and expensive.

The bacteria in a microbial fuel cell work by oxidising and reducing organic molecules to create energy. 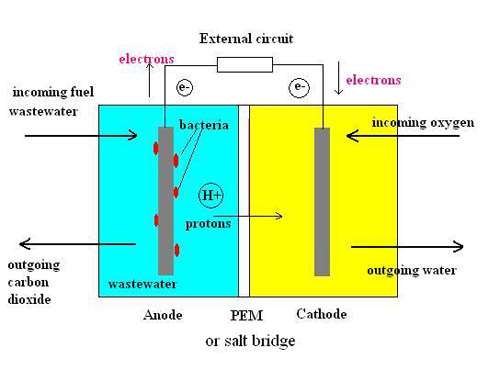 Figure 2: shows a Microbial Fuel Cell is split into two halves, an aerobic half containing a cathode that allows oxygen. The anaerobic side contains no oxygen, the anode acts as an electron receptor for the bacterial process. Separating both chambers is a proton exchange membrane or a salt bridge, this prevents oxygen from entering the anaerobic side while simultaneously allowing hydrogen ions to pass through thus generating energy.

Biocatalyst on the anaerobic side of the MFC oxidises organic substrates such as acetate therefore producing electrons and protons (Antonopolou et. al 2010). The protons are attracted to the cathode by passing through the PEM while the electrons pass through the external circuit (Rahimnejad et. al 2011). If oxygen enters the anode chamber this will prevent energy from being produced. (Rahimnejad et. al 2011) Types of Microbial Fuel Cells

A single chamber MFC, an anaerobic chamber that is linked to a porous cathode exposed to air and is separated by a PEM. Electrons are transferred to the cathode to complete the circuit. A single chamber MFC does not require recharging with an oxidative media and aeration makes the single chamber MFC more versatile and inexpensive to setup due to the absence of expensive membranes and cathodic chambers this creates flexible application in wastewater treatment and power generation. 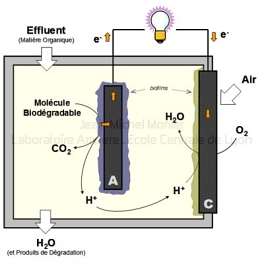 A double chambered MFC This type of MFC contains an anodic and cathodic chamber connected by a PEM that mediates proton transfer from the anode to the cathode all while blocking the diffusion of oxygen into the anode, this system is generally used for waste treatment and energy generation. 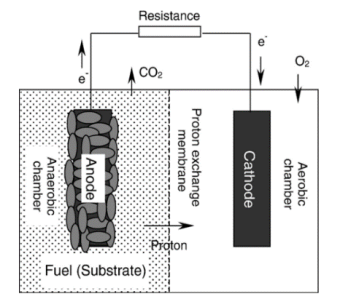 With the help of bacteria, Microbial Fuel Cells can convert chemical energy into electricity

There are current applications in which Microbial Fuel cells are involved proves it to be an ever-evolving technology that uses bacteria to generate electricity from waste and create hydrogen. By tapping into this previously unharnessed source of power, clean, sustainable energy can be produced at low cost.

Wastewater treatment- Microbial Fuel Cells can be utilised to treat sewage water. MFCs can kill the bacteria found in sewage. It has been proven that MFC can reduce the amount of bacteria present in wastewater by 80% (Liu 2004). The waste water is initially pre-treated to remove the toxins and non- biodegradable materials from the water. This process is deemed challenging as sewage water can be extremely toxic and polluted undergoes extensive treatment before MFC can be used to clean the water. High operational sustainability and low material costs are important characteristics for treating wastewater efficiently (Wang et. Al 2012)

Sea Water Desalination- Microbial Fuel Cells are capable of producing energy but at the level where we can remove salt from large amount of water. However, there is potential for such process to be accomplished, by using an adapted microbial fuel cell would make desalination of sea water possible without external electrical sources [5]. Researchers tested the process of desalination by using a desalination microbial fuel cell. This is quite different to the previous fuel cells mentioned as there is a third chamber present for the salt water in between the two electrodes. The process occurs with the positive and negative ions being attracted to the perspective electrodes as the proton electron membrane removes the salt from the water leaving it fresh. Scientists recorded that salt removal was up to 90% efficient however, higher removal efficiencies are needed to produce grade A drinking water [5].

Hydrogen Production- With the help of a Microbial fuel cell, hydrogen can be produced. This process does require an external source of power to convert the bacteria into carbon dioxide and hydrogen gas (JD Coates). Protons are released by the anodic reaction and pass through the PEM towards the cathode, this then combines with oxygen to form water. Hydrogen created from the electrons and protons produced by the microorganisms metabolizing in a MFC can be dangerous temperature wise (Liu et al).

Power source-The whole idea behind the development and advancement of microbial fuel cell technologies was mainly based on providing cheap, accessible power to remote regions of in the world like villages in Africa, where majority of the population lives without the luxury of electricity (Doty, 2008). The use of homemade Microbial Fuel Cell in Africa is very new, tests are being done with manure and dirt which would be beneficial for populations in rural areas where this can be as affordable as possible. The electrical current produced by a simple homemade MFC is enough to recharge a cell phone battery, an important communication and lighting tool to rural African communities. Efforts are being made to create MFCs that can be constructed from simple items that can be easily acquired. Materials such as soil, manure, copper wire, buckets, and graphite cloth are essential in creating a simple MFC.

Microbial fuel cells have created a promising future for human beings and the planet we live on. The research done so far and with the applications that we have currently will help aid the reduction of our need to use fossil fuels and allow us to gain energy from wastes products, bacteria ridden water, enable us to use previously salted water to drink, farm with, this will greatly benefit 3rd world countries and areas plagued with drought and provide electricity to places that do not have any. Scientists are not able to utilise MFC technology to change the world in a day but are working on ways to help make a change bit by bit. Microbial fuel cells will never could produce enough electricity to make coal-fired power plants a thing of the past but however it does have to availability to help us utilise it less hence making the world a safer place to live