F’ is an incompatibility group involved in E. coli conjugative ability and chromosomal transfer, which can exist as an extra-chromosomal element.

1st developed as a large insert cloning system to facilitate the construction of DNA libraries to analyze genomic structure.

Technology was developed to carry out genetic and functional studies of viruses (herpes virus especially). Since then BACs application have grown intensely and have benefited the research community in many fields, such as in genomic fingerprinting, sequencing of the human genome, in vaccine development and in vitro transgenesis,.

The original BAC vector, pBAC108L, is based on a mini-F plasmid, pMBO131 (Figure 1) which encodes genes essential for self-repli­cation and regulates its copy number inside a cell. The unidirectional self-replicating genes are oriS and repE while parA and parB maintain copy number to one or two for each E. coli genome. 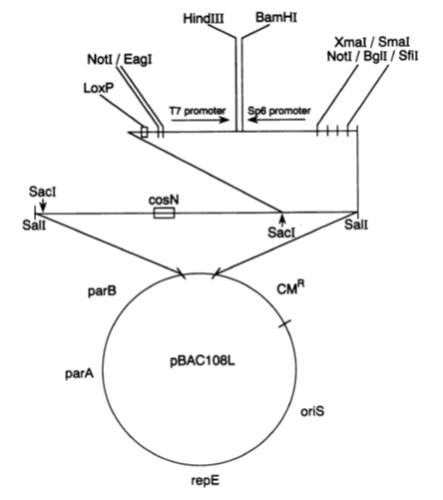 Presence of cosN and loxP sites(cloned in by bacteriophage l terminase and P1 Cre recombinase, respectively) permits linearization of the plasmid for convenient restriction mapping.

There is a chloramphenicol resistance gene for negative selection of non-transformed bacteria.

Vector is 6900 bp in length and is capable of maintaining insert DNA in excess of 300 kilobases (kb).

There have been many modifications done to increase the ease-of-use as well as for use in specific systems and situations.

pBeloBAC11 2 and pBACe3.6 are modified BAC vectors based on pBAC108L and are commonly used as a basis for further modification.

The primary characteristic of this vector is the addition of a lacZ gene into the multiple cloning site 2 of pBAC108L.

Plates supplemented with X-gal/IPTG, an intact lacZ gene encodes b-galactosidase which catalyses the supplemented substrate into a blue substance. Successful ligation of insert DNA into the vector inactivates lacZ, generating white colonies, indicating the presence of a successful vector-insert ligation.

It is still a low-copy number plasmid due to presence of parA and parB. 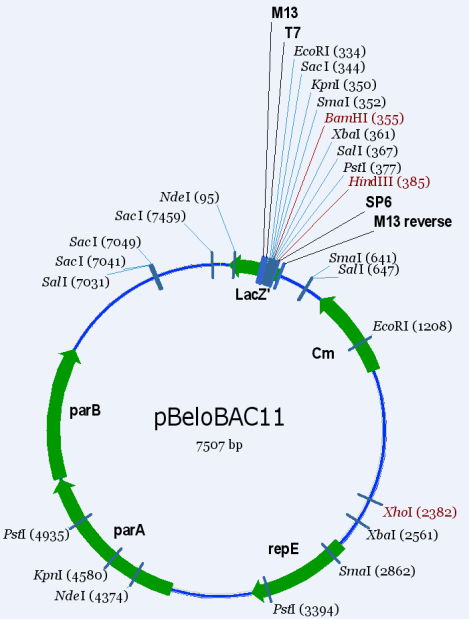 This vector is based on pBAC108L but is more highly modified than pBeloBAC11.

In order to overcome the issue of low plasmid copy numbers, the P1 replicon in F’ was deleted and a removable high copy number replicon originating from an inserted pUC19 was introduced.

This vector contains 2.7 kb pUClink stuffer fragment which is flanked by two sets of six restriction sites within a sacB region.

Levansucrase, a product of sacB gene, which converts sucrose (sup­plemented in the media) to levan, which is toxic to E. coli host cells. Hence, if the vector is re-ligated without an insert, the functional sacB produces levansucrase and the cells die before forming colonies. Successful ligation of an insert into the vector increases the dis­tance from the promoter to the coding region of sacB, disrupting toxic gene expression in the presence of sucrose. 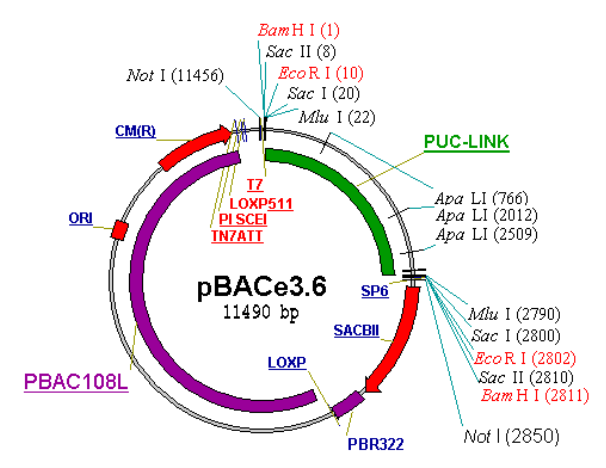 In addition to this vectors, there are many specialized BAC vectors carrying a variety of different combinations of drug resistance genes. Besides, many different selection mechanisms and markers are available. Modifications of cloning sites (unique restriction endonuclease sites) are also common as per the addition of genes and promoters specific to different strains of bacteria. 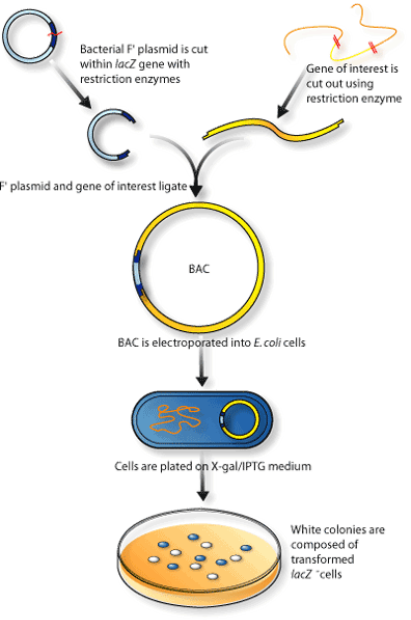 BACs are useful for the construction of genomic libraries but their range of use is vast. It spans from basic science to economically rewarding industrial research, and fields as prosaic as animal husbandry.

In genomic analyses, it helps in determining phylogenetic lineage det between species.

Helps in study of horizontal gene transfer and since bacterial genes are usually clustered, the ability of BAC vectors to accommodate large inserts has allowed the study of entire bacterial pathways.

By isolating DNA directly from soil or from marine environments, the “metagenomes” of those organisms which are either uncultureable or are termed viable but uncultureable can be cloned into BAC vectors and indirectly studied.

In industrial research fields where BAC vectors are invaluable tools in cataloguing novel genomes is in the discovery of novel enzymes. Work has been done on identifying enzymes that are involved in biopolymer hydrolysis or even radioactive waste management.

BAC vectors have been instrumen­tal in studying large double stranded DNA viruses both from an academic point of view and as a tool to develop improved vaccines.

In genomic research, high throughput determination of gains and losses of genetic material using high resolution BAC arrays and comparative genomic hybridization (CGH) have been developed into the new tools for translational research in solid tumors and neurodegenerative disorders.

BAC technology is becoming the most upcoming method for genome sequencing. The technique uses an overlapping tailing part of large genomic fragments (150-200 kb) maintained within BACs. Every individual BAC is shotgun sequenced, where these large overlapping sequences of the BACs are assembled to produce the whole genome sequence.

Definition: Yeast artificial chromosomes (YACs) are plasmid shuttle vectors capable of replicating and being selected in common bacterial hosts such as Escherichia coli, as well as in the budding yeast Saccharomyces cerevisiae.

They are of relatively small size (approximately 12 kb) and of circular form when they are amplified or manipulated in E. coli, but are rendered linear and of very large size(several hundreds of kilobases), when introduced as cloning vectors in yeast.

Many different yeast artificial chromosomes exist as ongoing refinements of the initial pYAC3 and pYAC4 plasmids (Figure 1) constructed by Burke et al. (1987). Basic structural features of YACs were developed from the yeast centromere shuttle-plasmids (YCp) series. These are composed of double-stranded circular DNA sequences carrying the b-lactamase gene (bla) and the bacterial pMB1 origin of replication, thus conferring resistance to ampicillin and the ability to replicate in bacteria, respectively.

YACs also contain the cloning site in the middle of the SUP4 suppressor of an ochre allele of a tyrosine transfer RNA gene; this enables restoration of the normal white color phenotype in otherwise red ade1 and/or ade2 nonsense mutants. Accordingly, in the insertional inactivation cloning process, the SUP4 gene is disrupted by the DNA insert, thus removing the suppression of the ade mutations and allowing their phenotypic expression as red color. 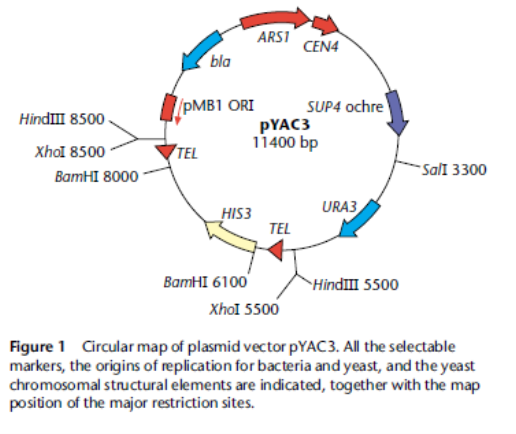 They also include yeast ARS1 with its associated CEN4 DNAsequence, as well as the URA3 selectable marker.

The stability of YAC vectors in yeast per se is similar to that of natural chromosomes provided that all three structural elements (ARS, CEN and TEL) are present and functional, in addition, that the minimal required size is reached by the insertion of enough exogenous DNA.

Indeed, several mutations are known to affect YAC stability and segregation together with natural chromosomes.

Another important consideration is that faithful duplication of YACs is guaranteed only if other DNA sequences incompatible with ARS do not exist on the construct, particularly relevant when unknown DNA inserts are cloned in the YAC vector, as in the case for genomic libraries, in which there could be cryptic or otherwise unknown ARS-like sequences able to interfere with the ARS function. 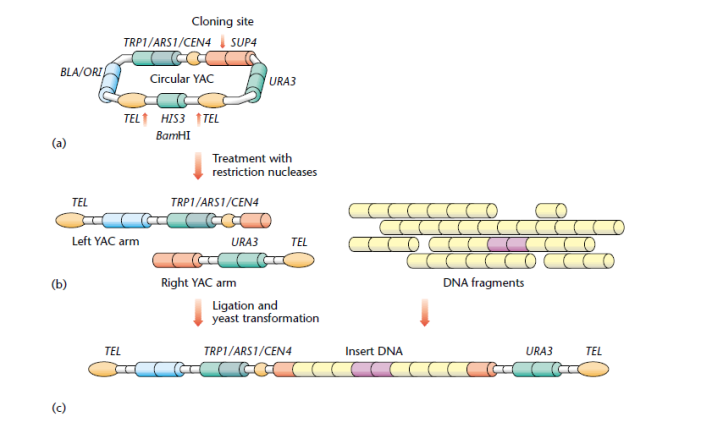 Helps in the study of regulation of gene expression by cis-acting, controlling DNA elements, that are present either upstream or downstream of large eukaryotic genes, after the transfer of these YACs from yeast to mammalian cells.

YAC libraries has greatly advanced the analysis of genomes previously cloned in cosmid vectors. For example, YAC clones have been used as hybridization probes for the screening of cDNA libraries, thus simplifying the characterization of unidentified genes.

Recent technological developments allow the transfer of YACs into mouse embryonal stem (ES) cells and the subsequent generation of transgenic mice. Investigators have begun to employ these artificial chromosomes for the in vivo study of multigenic loci in mammalian cells.

Two process can be used to obtain a sequenced genome, or region of interest: 1. Physical Mapping.

It allows for the detailed mapping of specific regions of the genome. With the help of this, whole human chromosomes have been examined, such as the X chromosome,generating the location of genetic markers for numerous genetic disorders and traits.