Imprinting and bonding are important biological processes that aid in the survival of offspring; offspring require parental bonding to survive. These processes allow the offspring to learn skills and behaviours needed for survival, as well as the knowledge of their own species in order to successfully breed in the future. The importance of bonding and breeding differs in different species. Bonding can be important in obtaining food, communicating, survival, and mating. The following includes the mechanisms of imprinting and bonding with differences and similarities between the two. Information regarding Konrad Lorenz and his work is included. A mention of communication and its role in reducing conflict has also been included. 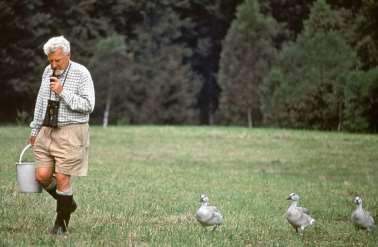 Imprinting is a classical biological process in birds such as geese and ducks. New-born chicks become attached to the first visible moving object they see. Imprinting is mostly non-species-specific but imprinting between same species does occur; filial imprinting (between offspring and its parent) is more common is precocial animals than in altricial animals as precocial animals are mobile and alert when they are born and therefore have the ability to imprint early. Certain behaviours are affected by imprinting more than other behaviours. There is a significant sensitive period where imprinting takes effect (1). For ducks, this is between 4-48 hours after they have hatched. A duckling will pretty much follow whatever is moving once it has hatched and will eventually learn what it is following and imprint on it. An Austrian named Konrad Zacharias Lorenz was a zoologist, ethologist, and ornithologist (bird behaviour), who studied instinctive behaviour in animals, particularly greylag geese and the principle of imprinting. These studies led to Lorenz, Niko Tinbergen, and Karl von Frisch winning a Nobel Prize for Medicine. He is regarded as one of the principal founders of ethology. The innate release mechanism, a main concept regarding imprinting, where organisms are genetically predisposed to be responsive to certain stimuli become fixed and imprint on the parents (2). Senses are important for imprinting; as ducks are precocial they imprint on whoever they see within a certain timeframe (4-48hrs) using their sight. As puppies and kittens do not open their eyes for a little over a week after birth, they take a little longer to imprint. Mammals, who are altricial use their smell, sight, and sound to imprint on their mothers, though primates are born with brains that still need to fully develop and so imprinting takes longer. Imprinting is a survival instinct as it ensures the safety and protection for the vulnerable new-born; it prevents the young from predation, as its mother is there to protect it. It allows the offspring to learn skills for survival and behavioural characteristics from its mother. Imprinting is different to bonding as there is a specific period where imprinting occurs. Lorenz’s theory involved an experiment whereby chicks where hatched in an incubator and then handled by humans. They were placed back with their mother who accepted the goslings but the goslings did not accept her. They followed the human they first saw. Lorenz’s theory argued that imprinting is irreversible and takes place at a certain stage (as mentioned above). It included his theory of imprinting being innate but recognizing the moving object was learnt. Filial imprinting lasts until the offspring becomes adults. Socialization is important and imprinting experiences will have a long-term effect on social behaviour; isolating a puppy will result in the pup displaying abnormal social behaviour such as anxiety. Imprinting has a significant effect on sexual preferences, which should be a factor to consider in captivity or rehabilitation centres. Sexual imprinting is where characteristics learnt form siblings will influence their mating preferences in adulthood. This process depends on the species; there could be a period in between filial imprinting and sexual imprinting for some species, whereas for other species it can occur simultaneously (geese). E.g., – if a duckling was to imprint on a chicken and considered the hen’s chicks its siblings, it is likely to sexually imprint on chickens in adulthood as it is attracted to the characteristics of the species it imprinted on and believes it to be the same species. The appearance of the object or animal the offspring imprints on will teach them to recognise what future mates should look like (providing they imprint on the correct animal) (3). Imprinting allows the parent to raise her young much easier, as the offspring imprints on her early and will trust her and follow her wherever she goes, which is vital when it comes to predation. 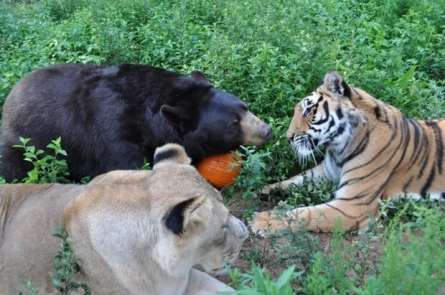 Bonding is a biological process where animals of same species (pair bonding) and sometimes, different species connect on a social level. This can occur at different stages in their lives. Reasons for bonding include pair bonding, which results in mating and reproduction in mated pairs, and social bonding that is vital in species that form packs or hierarchies etc. Wolves form social bonds within the same pack, which enables them to hunt and live in a social group. For wolves, bonding is crucial as they do everything together, from hunting to defending territory and raising young. Parent-offspring bonding is beneficial for both parents and offspring as the offspring have a greater chance of survival with the protection from its parent(s), and the parent(s), can ensure their genes will be passed on and their offspring makes it to adulthood. Their need to nurse their young originates from the release of a hormone called oxytocin, which influences motherly behaviour, breeding animals with this hormone absent results in mothers leaving their offspring earlier than mothers with that hormone. Sibling recognition prevents inbreeding from occurring as well as for cooperating. With mating pairs, bonding behaviours include vocalizations; calls and sounds, movements; dancing, body contact (tactile), and postures, as well as offering gifts. Senses are just as vital in bonding as they are in imprinting. Visual, tactile, vocal, and auditory are important factors in mating pairs and are often expressed in rituals. Every meeting between mating pairs, the rituals are repeated to reinforce the bond. Pairs may bond for certain parts of a breeding season; short term or long term, and other species may mate for life (monogamy) (4), such as swans and geese. Bonding in mating pairs, allows for recognition of the individual’s mate within a crowd (nest site e.g.). It allows the animal to imprint the image of its mate in its head. Bonding requires effort, which confirms their commitment. It provides a better chance of survival for their offspring as both parents are present for protection and for providing food. The pair does not need to go through the long process of selecting a mate during breeding season. Parent-offspring bonding is not only evident in birds but in other species such as elephants; within their group of family that contains elephants of a range of ages, greet and maintain bonding by tactile – touching and often curling their trunks around the other’s, vocalization communication, and scent. Dominance is expressed through play at an early age, whereby young elephants, both male and female but progresses in males as they get older, charge at each other and wrestle with their trunks. 30 minutes after an elephant is born, it is able to stand up and follow its mother. Females will form close bonds with their mother and will stay by their side for life, which allows the mother to teach her offspring skills needed for survival. Males tend to leave at around 12-15 years where they may temporarily join other groups for mating and feeding. Bonding in elephants, where they stay together for life (females), increases their chances of survival as they form large herds, which makes it more difficult for predation to occur. An example of interspecies relationships is the bond between a lion, tiger, and bear (diagram 2 ^), who were abused in the hands of a drug dealer, bonded for comfort and now consider themselves brothers. They are the only known lion, tiger, and bear to live together in the world; in the wild, they would never meet. Their early experiences as young cubs and the fact that they have never been separated since, strengthened their bonds (5). 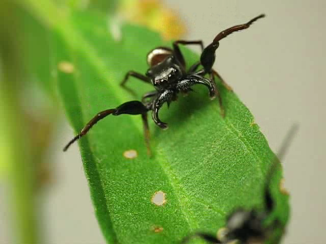 Communication is crucial in reducing conflict, especially between territorial animals; vocalizations scent, and visual senses play an important role in alerting other animals when they have entered another’s territory, which will prevent fighting e.g. an animal will urinate on the edge of its territory to communicate to other animals that is their territory and should not be crossed. Establishing a hierarchy reduces the risk of intraspecies conflict; all the animals within the group are aware of their ranking and role they must play. This enables them to function as a working group, which will aid in their survival. Ritualized combat, a form of agonistic behaviour, is another method used to reduce conflict such as threatening displays to intimidate other animals, and usually prevents fighting from occurring. It is also beneficial in aiding survival as preventing conflict decreases the chance of being killed, losing food or territory, or losing a mate.

Submission prevents fighting from occurring, as the submissive animal is likely to give in to the dominant one, which prevents conflict.

Bonding and imprinting occurs in many species and both ensure the survival of an animal. Lorenz’s work provided further information regarding the importance of imprinting, noting a specific period for it to take place and the possibilities of it going wrong (sexual imprinting on a different species). There are clear differences between bonding and imprinting, with purpose being one of the main ones. However, they are similar in terms of forming a social connection, both interspecies and intraspecies. The senses are a vital part of these connections as they help animals distinguish characteristics and recognise stimuli that influence imprinting/bonding. 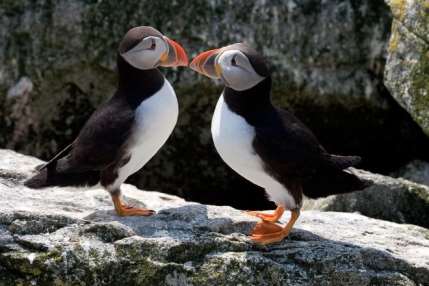