Analysis of the Investigation of the Jeffery MacDonald Murder Case

This report analyzes the crime committed at the MacDonald Residence on February 17th 1970. At around 3:3oam an operator received a call from Captain Jeffery MacDonald requesting an ambulance. At the scene, Collette MacDonald, Kimberley MacDonald and Kristen MacDonald were all found dead, and Jeffery MacDonald had sustained injuries.

Jeffery MacDonald, the only survivor gave this statement about the event:

MacDonald stated that after a nightcap, Collette went to bed. At 2:00-2:30am he went to the bedroom and found Kristen had wet his side of the bed. He returned her to her room and slept in the living room.. He was awakened by his wife and oldest daughter’s screams and simultaneously attacked by a black man with a baseball bat and by two other men. He saw a woman with blonde hair wearing a floppy hat, boots and a short skirt carrying a lighted candle and chanting “acid is groovy, kill the pigs”. They attacked him tearing his pajama top over his head. He was hit on the head and fell unconscious. He came to on the hall floor, he went to the master bedroom where he found his wife with a knife sticking out of her chest. He removed the knife and tried CPR but could not revive. He went to look for the children but could not help them. Before calling the ambulance he went to the bathroom to inspect his own injuries. MacDonald called the ambulance and returned to his wife where he was found shortly after by police.

This statement and all the evidence have all been considered in reanalysing the events of February 17th 1970.

To avoid repetition, analysis of both blood and fibres using modern techniques is shown below, unique techniques will be mentioned for relevant evidence below this.

Moreover, a study determined that dry blood stain analysis in conjunction with liquid chromatography-mass spectrometry can represent an alternative to conventional techniques, responding to some of the present issues concerning the different forensic toxicology applications (Salder Simões et al.. 2018, 634-644). As Jeffery MacDonald was not tested for amphetamines or other drugs this could be used to help gather evidence.

A new study showed when absorbance spectra are broad and featureless, like those that have gone through the was multiple times or have been worn out, calculating the first derivative can provide more points of comparison and can aid interpretation of results (Wiggins et al.. 2007,9 -18). This is helpful when thin-layer chromatography cannot be used (Wiggins et al.. 2007, 9-18).

Differential thermal analysis can be used to determine different wax mixtures and match them to those in the family home (Sharpe, R.W.L & Wheals, B.B. 1972, 453-456) 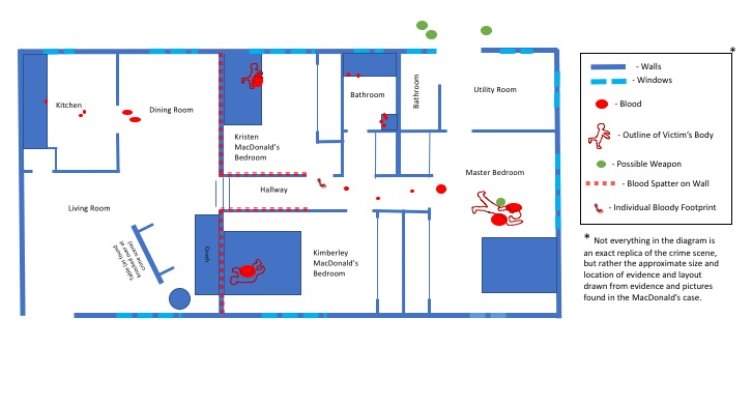 -          Stains on the blue bedsheet and multi-colored bedspread

-          Spatter found inside the closet in the master bedroom

Small pieces of surgeons glove found near body and in bedsheets

Cause of death fracture to the skull and subsequent stabbing of neck.

Cause of death stab wounds to heart, massive hemorrhaging.

No cuts in MacDonald’s pajama top matched the wound which caused the pneumothorax.

Pieced together with the fact that each of the members of the MacDonald family had a different ABO blood group, the evidence suggests a sequence of events like so.

A. Jeffery hits Collette. Her blood from the hit is transferred to Jeffery when she rips his pajama top down the left front seem, shoulder and sleeve resulting in fibres in the master bedroom. Jeffery thrusts 31” Wooden Club into Collette’s chest, bruising her chest.

B. Kimberley enters the room and Jeffery hits left side of her face. Her blood is spattered on the doorframe of the Master Bedroom. 6” pool of blood near the Master Bedroom door indicates that her body had fallen to the floor.

C. Collette having gotten the Geneva Knife slashes Jeffery’s abdomen, resulting in the cuts in his top across the abdomen.

D. Jeffery hits both sides of Collette’s head knocking Collette unconscious. Splattering her blood inside the closet, on the carpet and on the master bed.

E. Jeffery strips the blue bed sheet of the master bed, leaving 22 fibres from his top on the bottom sheet of the bed. He picks Kimberley up and Kimberley’s blood is transferred to the bedsheet and Jeffery’s pajama top. Her blood drips in the hallway as he takes her to her room.

F. Jeffery puts Kimberley back in her bed, 14 fibres from his top fall on her bed and 1 is lodged under her pillow. Jeffery strikes Kimberley twice with club. The blood splatter on the wall is from both Kimberley and Collette, indicating this happened after the initial attack on Collette. Blood on the ceiling comes from Kimberley from blows to her face.

G. Jeffery goes to the Kitchen to get the Hickory Knife, leaving traces of blood in kitchen. He gets surgeons gloves out from under the kitchen sink, resulting in blood from his abdominal wound dripping near sink and on cupboards.

J. Jeffery stages the break-in in the living room, leaving glasses by window and retrieving the bedsheet from the dining room floor causing a smudge of blood to be left outside the kitchen door.

K. Jeffery gets the multicolored bed spread from the master bedroom and places it on the floor of Kristen’s room. Jeffery places Collette’s body on the bedsheet. When he does this blood from Collette drips into Kristen’s body outline.

L. Putting the blue sheet over Collette he picks her up. Direct bleeding from Collette onto both the blue and multicolored bedspread, blood from Jeffery and Collette’s pajama cuffs imprints onto the bedspread. Upon the bedsheet are two bloody handprints, a chin impression and a shoulder impression. As Jeffery exits Kristen’s room with Collette’s body he steps on the sheet with her blood and leaves 3 footprints, 1 prominent in the hallway.

M. Jeffery puts Collette’s body in the master bedroom on top of 24 fibres left from the struggle earlier. Removing the bedsheets part of his glove tears off, he leaves the sheets at the other side of the room. He clubs Collette again resulting in the laceration on her hairline and the blood splatter on the ceiling.

N. Jeffery goes to stab Kimberley with the Old Hickory knife, and stabs Kristen again with the icepick.

G. He wipes and tosses the weapons out the back door. He writes “Pig” on headboard of master bedroom leaving 1 fibre behind.

H. Getting rid of the gloves and obtaining a scalpel from the hallway closet he stabs his chest above the bathroom sink.