Cosmological principle is a hypotheses of that the Universe is homogeneous and isotropic on a large scales (Random House Dictionary, 2017), which means that the Universe(U1 or U2) will be seen as the same distribution of objects no matter where to see. Thus, the same physical laws and models applied on the Earth will also applies in all parts of the Universe(uoregon, N/A). It was believed that the model of Earth-centred until the Renaissance. Copernicus came up with his geocentric model In this article, the laws be investigated is Kepler’s three laws, and demonstrates how new observations are found by observing the knowledge from previous. Kepler, who correctly defined the observation of Copernicus that the planets revolve around the Sun, came up this his laws of planetary motion and correctly the orbits of planets. Kepler in virtue of astronomical observations and records of Tyche Brahe, who was a wealthy astronomer and believed in Earth-centred model of universe, to found the orbits of the planets followed three laws (NASA, N/A). Hence, Kepler’s three laws of planetary motion are 1st law of Ellipses, 2nd law of equal areas and 3rd law of harmonics(Air University, 2003), which each of them will be explored specifically in the following paragraphs about the evidences that support the theory initially and currently.

Kepler’s first law states that the orbits of the planets are ellipses with the sun at one focus(reference). This means that the Sun, as one of the points(foci), is not the centre of the ellipses; and the planet follows the ellipse in its orbit, which the distance of the planet and Sun will changing constantly as the planet moves around in its shape of ellipses. This can be illustrated in Figure__, where the sum of the green and blue lines are always constant. 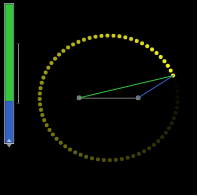 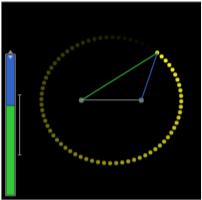 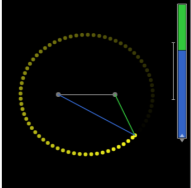 Secondly, Kepler’s second law describes the area of a planet connected by a line to the Sun travels in its ellipse orbit is equal to the area sweep in a fixed time period. This can be illustrated in Figure__, which v1 is the velocity at perihelion (when the position is closer to the Sun), v2 is the velocity at aphelion (when the position is far from the Sun), r1 and r2 is the distance from a planet to the Sun at perihelion and aphelion. The law of areas allows

as the area swept are the same. Divide both side by

to make it as ratio

. If the distance of aphelion r2 is 2 times longer than perihelion, the velocity v2 will be 2 times slower than v1. Hence, this indicates the speed of the planet is faster when it is positioned close to the Sun, and slower when the distance of the planet to the Sun is far. In addition, Kepler’s second law supports his first law, as the velocity vector is constantly changing in its magnitude and direction. The magnitude of the velocity would be the same If the orbit were circular. Therefore, this further justified Kepler’s first law that the shape of the orbit is ellipses. 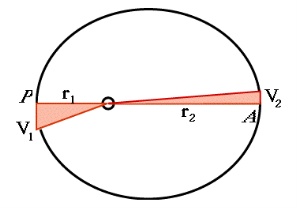 Furthermore, the third law makes a comparison between the motion characteristics of different planets, which result in the squared ration of the orbital period of a planet is equal to the ration of the cubes of the distance it to the sun(semi-major axis). This can be expressed in formula 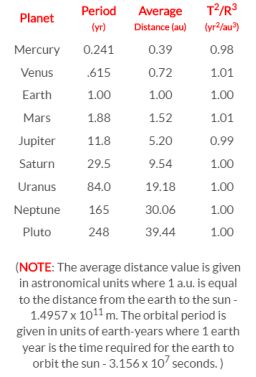 Furthermore, Newton’s laws support Kepler’s laws and provide corrections. Newton’s law of gravitation is found to describe the motions of all in the universe, which also justified the cosmological principle. As the velocity of the planet orbit is constantly changing, there is an acceleration in the movement; and the areas sweep by the planet- Sun line are equal in their equal times, this indicates that there is a force directed acting on the planet to the Sun. This matches Newton’s second law that there is an implied force that acts on the planets continuously. Newton’s third law, which sates the size of forces acting on the two different interacting objects are the same, implies the force is proportional to the product of the masses for the planet and the Sun.[JZ-01] Thus, Kepler’s laws are supported by the Newton’s laws.

Nicolaus Copernicus firstly proposed his heliocentric view of the universe that the Earth was not the central and like all the other planets circled the Sun (First print of Heliocentric model by Nicolaus Copernicus see Figure__). However, he was not be able to publish his theory until his death duo to people believed he was not concerned about the Church’s approval. Furthermore, the evidence for Copernicus model is gradually mounted. Galileo observed the phase of Venus by his telescope, which proved that the planet orbits the Sun. Kepler corrected and defined the planets orbits after he became the assistant of astronomer, Tycho Brahe, who asked him to defined the orbit of Mars and passed his collection of astronomical observations to Kepler after his death. Brahe was attempt to prove his theory with all his extensive astronomical records collected through his lifetime, which later on Kepler adapted his records and used to prove heliocentrism and found the orbits of the planets followed three laws. This was proved initially that Kepler started to describing the Earth’s orbit before the orbit of Mars, as Mars was observed from a moving Earth. As he followed the traditionally believed that the Earth’s orbit was circular, he noted the linear speed of the planet changed with the distance from the sun, which matches with the astronomical observations of the motions of Earth with a circular orbit collected by Brahe. Thus, the orbit of Earth is close to a circle defined. However, Mars was moving too quick at aphelion perihelion and too slow at the sides while using the model established initially for Earth. Therefore, Kepler decided to change the shape of the orbit to represent Mars’ position more accurately. Thus, the orbit is an ellipse was justified by applying the area law to calculate. Eventually, his discovery about the area of the planet to the Sun swept in equal times led to the realization of Kepler’s first law that the planets orbits are elliptic with the Sun at one focus point. 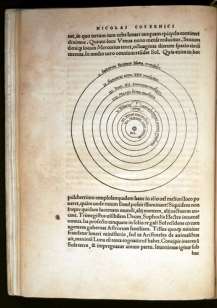 Newton corrected Kepler’s law with his laws of motion and law of universal gravitation, which makes small change that the planets are orbited around the sun but around common centre of gravity. This helps to discover other planets in the other stars. The Hubble space telescope of NASA has taken the first visible- light snapshot of a planet circing another star. The Hubble image of Fomalhut from the Hubble shows that the new discovered planet Fomalhaut b orbits its parent star. It also shows a ring 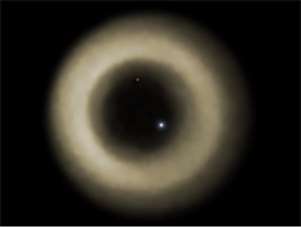 of debris appears to surround the new planet (NASA, 2008).

furthermore, Kepler’s first and second laws can also be supported by the weather and time on Earth, which if the orbit were a circle, the earth would travel at a constant speed and spend half of the time in both summer and winter. However, the winter time is about 2 days fewer in the winter half and the earth moves faster in the winter half(Stern, 2005).

In conclusion, kepler’s laws are still vaild today and have an important place in the history of science, astronomy and cosmology. They are the key step in the revolution which moved from Earth-centred model to the heliocentric model, and they led the discovery of Newton’s laws. “. As the modern scientists are still discover more about the universe and working in the light of discoveries made by earlier fellow scientists, thus, it justified Newton’s statement, that “if I have been able to see any further, it was only because I stood on the shoulders of giants.