Augustine on the Trinity

Summary of Augustine on the Trinity Book 1

It is difficult to comprehend how the Father, Son, and Holy Spirit share in divine unity, yet all participate in different actions. Augustine breaks down how this idea of the Trinity makes sense in his work titled On the Trinity. Augustine writes from a catholic tradition, which believes the trinity to be “of the same substance in an indivisible equality” (Book I Chapter 4). Pontius Pilate did not crucify the trinity; he crucified the son. The trinity did not appear as a dove and descend on Jesus when he was baptized, the Holy Spirit did. The trinity did not tell Jesus “Thou art my son,” the Father did. We hold the idea of the unity in the Trinity in contention with the distinguishing characteristics of each component, and we look to brilliant theologians like Augustine to explain how this is best done.

Augustine then decides to start his proof by proving that “That the Son is Very God, of the Same Substance with the Father” (Book I Chapter 6) through biblical evidence. John 1:1 says that “In the beginning was the Word, and the Word was with God, and the Word was God.” In conjunction with John 1:14 “And the Word was made flesh, and dwelt among us,” it is plain to see that the Word of God is the Son of God (Book I Chapter 6). Augustine goes on to say that because of John 1:2-3 “The same was in the beginning with God: all things were made by Him, and without Him was not anything made,” Jesus was not made, making him not a creature. Augustine explains the implications of Jesus not being a creature here: “but if He is not a creature, then He is of the same substance with the Father. For all substance that is not God is creature; and all that is not creature is God” (Book I Chapter 6). Now that it is established that proving that a member of the trinity is not a creature is enough to prove that it is one with the creator, this task must be performed with the Holy Spirit.

The establishment of how the Trinity is of one substance with the father is addressed but there still remains the question of equality. Some might wonder how the Trinity could be equal if Jesus himself said, “My Father is greater than I” in John 14:28 (Book I Chapter 7). Augustine combats this logic through the apostle Paul writing “Who, being in the form of God, thought it not robbery to be equal with God; but emptied Himself, and took upon Him the form of a servant, and was made in the likeness of men: and was found in fashion as a man” (Book I Chapter 7). The Son of God, then, is equal to God the Father in nature, but less in “fashion.” (Book I Chapter 7). This distinction is important in addressing the original concern of Jesus explicitly stating the superiority of the Father because Jesus is correct that “in the form of a servant which He took He is less than the Father” however, Augustine goes on to explain “in the form of God, in which also He was before He took the form of a servant, He is equal to the Father” (Book I Chapter 7). All in all, Augustine’s point is that the implicitness of the equality of the Father and Son is far more prevalent then the explicitness of what Jesus said. Both Jesus and the Holy Spirit are absolutely equal to the Father given the presupposition that both are not creatures.

Using philosophical reasoning and biblical support, Augustine was able to cover the basics as to why Trinitarian theology can maintain the seemingly paradoxical notion that the trinity is divinely united yet acts severally. The gathering of biblical evidence allowed the case to be built that if one is not a creation, they are a creator and then continued to be built around proving that the members of Trinity are not “creatures.”

Trinitarian theology was something that was never more than a part of the Nicene Creed that I used to say when I was raised in the Anglican tradition. Having it be a central lecture topic for a week of Christian Theology was very interesting for me because it was something that I had not heard much about prior to the class. The Trinitarian thought of members being severally acting but divinely unified was something that I really was having trouble grasping so I decided to make it the goal of my research paper to look into making sense of the Trinity.

I was intrigued by Augustine’s Trinitarian model involving the Lover, the Beloved, and the [bond of] Love that we talked about in class so I decided that he would have some very intelligent and theological reasons why Trinitarian thought makes. Thankfully, he did not disappoint. Augustine pulled together bible passages and related them in a way that I would not think to do. The way he took the verse commanding us to not serve anyone but God and relating it to the verse where we are commanded to serve the Holy Spirit is the kind of parallel that I really appreciate and would not have thought of myself.

As my theology is being developed by the culture around me, I am realizing that a lot of our Christian culture (in my experience) shouts Unitarianism. I think that the reason I was so intrigued by Trinitarian theology is because the oneness of God has been so emphasized. I do not know whether it is the fact that almost every prayer that I have been involved in began with the two words “Dear God.” Or maybe it is because every morning for 10 years straight our school corporately pledged our allegiance to the United States where we asserted that our country was “Under God.” Regardless, God as a singular has been engrained in me in a way that has been difficult to reconcile. I think we, as a Christian community should look to this image more often: 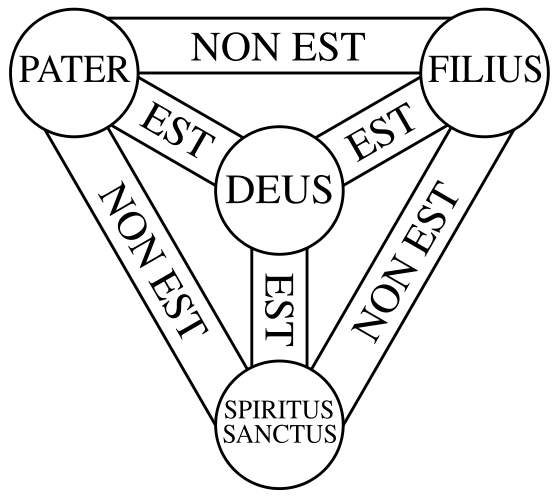 If this image were looked to more often (at least in protestant circles), maybe the Unitarianism that I witness would start to diminish.

The way that Augustine showed how equal all the members of the trinity are has been very moving for me. I really appreciate the way he uses scripture to defend his points. It seems like the scripture came first and his theology came second (which is the way it should be). Proving that the members of the trinity are absolutely equal because they are not creation was very insightful, I thought it was incredible logic but I realized if something isn’t creation, there’s nothing left for it to be other than creator.

I tend to oversimplify theology so I found that reading this Augustine piece has been very good for me in learning the complex nature that is the trinity. If I didn’t have Augustine to study and I had to come up with my own way to make sense of the Trinity I would have most likely clung to Paul’s famous body of Christ metaphor. I would have just explained that each of the parts of the Trinity is like a part of a body, all unified in their intentions but distinguishable in their actions. The more I read of Augustine, the more I realize that this level of simplicity is not good enough. A simple body metaphor will not be able to answer why the trinity can be equal even though Jesus said “My Father is greater than I” in John 14:28; a question that Augustine took in stride. In summary, Augustine himself said, “If you can grasp it, it is not God” (Augustine Sermon 52).

Being a bishop in the church, I would say that Augustine would choose his church as the Christian community that he is presently active in. A big characteristic of Augustine’s church was “love the sinner hate the sin.” The love that Augustine’s church shows to those who sin is lesser but similar to the love that caused the trinity to be created in the first place. God loved us even though we are sinners, so he sent his son to die for us. He loves us so he sent his holy spirit as a comforter even though we are sinners.

With regards to the characteristics that might resist this participation, Augustine might point to the heretical movement of the Donatists. As with a lot of heretical movements, there’s the threat of church members defecting to that ideology. Donatists have stricter standards for their church and clergy. Augustine might see these stricter standards as lack of love and grace for those who sin. God is able to extend grace and love to even the greatest sinners, Augustine might say, why they would not participate in this love is beyond him.