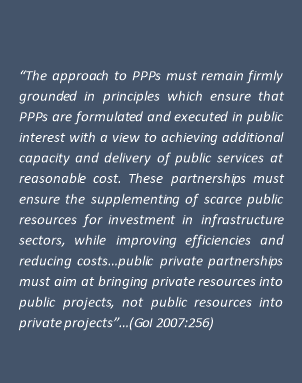 1.1 Evolution of PPP model in India

3. Current status of PPPs in India

5. Why closed approach to contract renegotiation?

The development of the India depends on the extent to which the ongoing and planned projects are successgully executed. In twelfth five year plan 2012-1017 a total of $1 trillion is envisaged to be expensed on infrastrucural development and out of which around 50% will be catered by private sectors. The basic principle of partnering with public entity is profit maximization. Any disputes can adversely effect the project. This delay comes with a cost and loss of revenue for private partners. Thus, the effectiveness of partnership lies in the Dispute Resolution System (DRS) of the country. The practical solutions such as amicable settlement, mediation & concilliation, arbitration and expert adjudication by statutory bodies are some of the measure to settle disputes. Other solutions can be mutual concessions and adjustments which can merge the differences between a concessionaire and the contract-granting government entity. Re-negotiation in a transparent and equitable manner can be the key adjustment solution for dispute resolution.

This dissertation delves in the fundamentals of public-private partnership (PPP) model in India. It reflects on evolution, mechanism, current status, models and schemes, renegotiation factors. It concludes by giving recommendation on residing to practical solution of renegotiation rather than considering it a moral hazard.

A public-private partnership (PPP) is a joint agreement between government and private sector for the purpose of provisioning of public service or infrastructure. In order to develop a world class infrastructure for huge Indian geography and economy, mammoth investment is needed which posed liabilities to government sector. The partnership with private sector to develop public infrastructure is a possible solution to cater infrastructure bottlenecks. It shares knowledge risk and resources for development. Lack of adequate and improved infrastructure from public transport, housing, ports, education, and healthcare may turn out to be an impediment to growth. The rapid increase of population need and demand creates budgetary constraints in building large projects. Involvement of PPPs into the development framework is a more effective, disciplined, efficient and commercial way of approach.

1.1 Evolution of PPP model in India

The evolution of PPP model in India dates back to mid-18th century where railway and tramway services were built on this model. There wasn’t much development in infrastructural development post-independence until the year of liberalization in 1991. Later which the government and private players jointly built large projects. 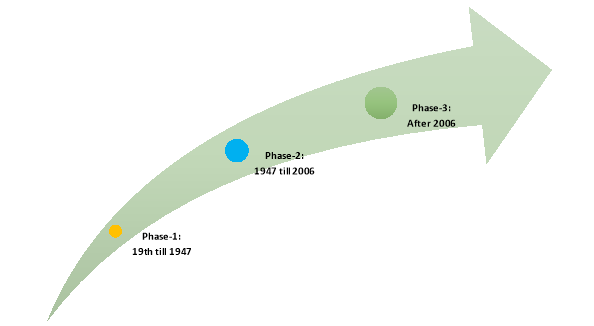 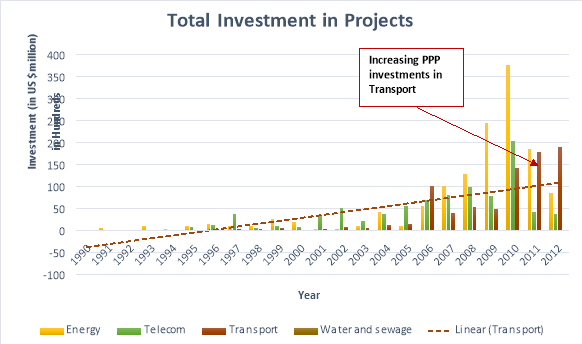 The Department of Economic Affairs, Ministry of Finance manages the PPP mechanism in India. The process starts from Phase-1 of project identification where various projects are identified through strategic planning and pre-feasibility analysis. A detailed sustainability of the project as PPP is studied and evaluated against alternatives. Other parameters such as value for money, internal clearances and suitability checks are carried out. Value of Money analysis helps in decision making and choosing between PPP procurement and conventional procurement options. It gauges project on the three basis of:

The ultimate goal is to maximize the profit of all stakeholders involved which can done by identifying risks and understanding mitigate measures. The partnering party must commit to adhere to the contract legislation and abide by them throughout project lifetime. 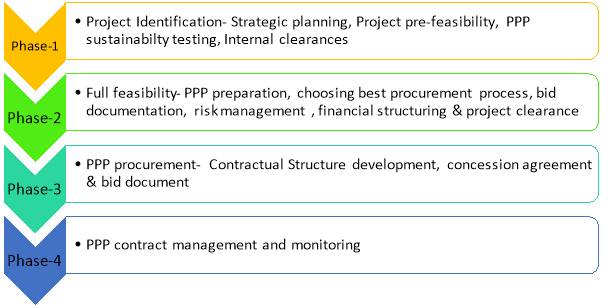 A qualitative assessment of value for money is performed to know the systematic risk of project. This risk must be optimally allocated between implementing parties rather than unequally transferring to private party.

Phase-3 is related to project procurement and award. In order to imbibe public confidence, these procurements must be unbiased, competitive and non-discriminatory. It must be allocated timely and encourage maximum participation from several parties involving in competitive bidding. All applications must follow PPP rules and procedures as framed by Government. Request for qualifications (RFQ) and Request for proposals (RFP) have to be submitted by parties after expression of interest (EOI). Technical and financial proposals must also be submitted in case of large and complex projects. A prescribed bidding procedure and model documents should be followed by implementing agencies after getting approvals from competent authorities such Cabinet Committee on Economic Affairs (CCEA) or Public Private Partnership Appraisal Committee (PPPAC). E-tendering and online auction are also conducted to invite participation from large number of agencies. The contract draft containing legal rules, regulations and standards are provided to prospective parties before bidding. Arrangements are made for speedy implementation of project.

Phase-4 of contract management and monitoring is done after project allocation. It actively supervises project as per contract throughout the project life cycle. It is a phase where majority of dispute occurs and is most crucial due to changing business and economic scenarios. A credible and efficient dispute resolution mechanism is set up to deal with any differences. It must be in accordance to contract that has been made during bidding process. Project monitoring Committees are formed to assist parties and resolve issues among implementing agencies.

3. Current status of PPPs in India

The sector wise distribution of PPP projects shows that 53% out of 758 projects are in road projects having worth of 46% by total value (Figure) mainly because of small size of projects. Urban development project accounts for 20% of total number of projects. Ports having larger project size accounts for only 8% of total number but 21% by total value. The expansion plans of highways, inadequate berth at Ports, inadequate capacity at airports, saturated routes with low payload to tare ratio in railways and energy shortages are some of the factors that drives the need of infrastructural development in India. The total cost of all the project is INR 3,833 billion. Some states have taken this model to far more extent than others. Karnataka, Andhra Pradesh, Madhya Pradesh, Maharashtra and Gujarat with 104, 96, 86, 78 and 63 projects are top five states following PPP based development. 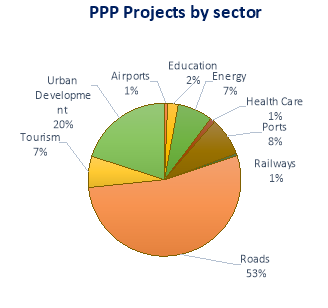 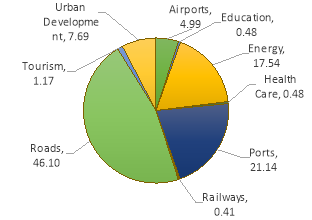 It can also be seen that states and municipalities have much larger role to play in boosting private investments in healthcare, e-governance and education sectors which seems to be untapped across India. National Highways Authority of India holds maximum of 155 projects and fall under Build-Operate-Transfer (BOT) or Build-Own-Operate-Transfer (BOOT) type of PPP. Government policies in favor of alluring private participation as well as innovation in implementation has rewarded success. Most of the contracts are awarded by domestic or international competitive bidding while remaining are awarded by negotiated MoUs.

The valuation graph shows that almost 78% of total project worth 500 or more. 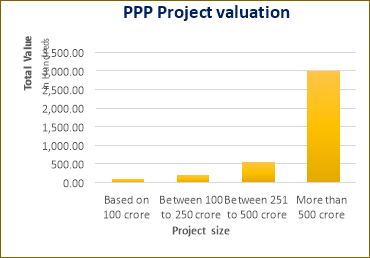 PPP model was formulated in order to improve public sector infrastructure and services. It includes whole spectrum of partnership between private and public agencies through contract making and revenue sharing. This arrangement includes significant risk due to imbalance in project finance and future uncertainties. Precautions are taken to keep the process flexible and discernible during contract formulation through various models and schemes which are summarized in figure xx. 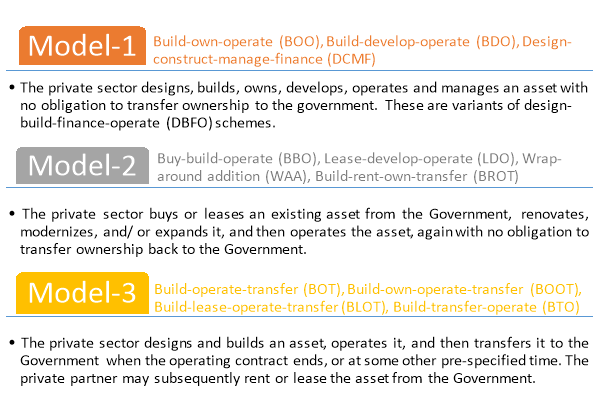 5. Why closed approach to contract renegotiation?

A big question is that why India does not have a defined and established legal and regulatory dispensation to address the issues relating to renegotiation and life-cycle management of PPP infrastructure assets? The struggle for reset of imported coal based projects for Adani Power and Tata Power, the GMR and GVK break up from mega-highway projects, The Gurgaon Expressway case, Delhi Metro Rail Express Line case of arbitration and private telecom operator case for fighting against government bodies poses a very clear demand for policy change. An independent, impartial and credible body should be set up in line with others created in emerging economies such as Infrastructure Concessions Regulatory Commission in Nigeria, the PPP Advisory Unit in Ghana, the PPP Centre in Philippines and the PPP Unit in South Africa. This empowered body should dispense judgment related to disputes in contract renegotiations. An overview of more than 1,000 PPP concessions studied by the World Bank Institute in Latin America and Caribbean from 1985-2000 throw up these characteristics of PPP renegotiation:

Some expert believes that perception among investors that PPP model will never face contract renegotiation related problems is a root cause of dispute. How can a large project having life of more than 20-30 years be expected to be never renegotiated? Several international case studies shows that it is rare to see project without renegotiations. In fact, in changing times, no human ingenuity can predict zero problems over a life cycle of PPP project.

Figure below shows some of the risks associated with public and private partnership that can result in conflict.

The Reliance Infrastructure and Delhi Metro Rail Corporation (DMRC) partnered subsidiary DAMEPL was the country’s first PPP project in railways. The airport express line project was commissioned in February, 2011. The dispute in this project was not a surprise as it was into controversy from day one on safety clearances and technical glitches. The tussle between parties was on payment of delay penalty. After commissioning of the project, the issue became severe and resulted in operational closure of service for six months. It settled only after payment of fees by Reliance infra who later claimed along with its lost reputation as penalty.

Analysis: The fiasco that resulted in withdrawal of Reliance Infrastructure from airport express line of Delhi metro questioned the policy of PPP in India. The major factor for dispute of Express Line PPP was wrong projections of daily passenger traffic by DAMEPL. The actual passenger never exceeded 20,000 per day which was against the expected 40,000 per day. This skewed the financial liabilities towards the Reliance Infrastructure. Some critics suggests the private party to meet the commitment of concession agreement without asking for contract renegotiation. The penalty of Rs. 795 crore slapped by the private partner set the stage for a long drawn legal battle between the two agencies. Had the terms of contract been renegotiated, and financial implications been revisited, the dispute would have never been raised. A practical solution of dispute resolution by an independent government body could have rescued the parties entering into dispute and later penalty payments.