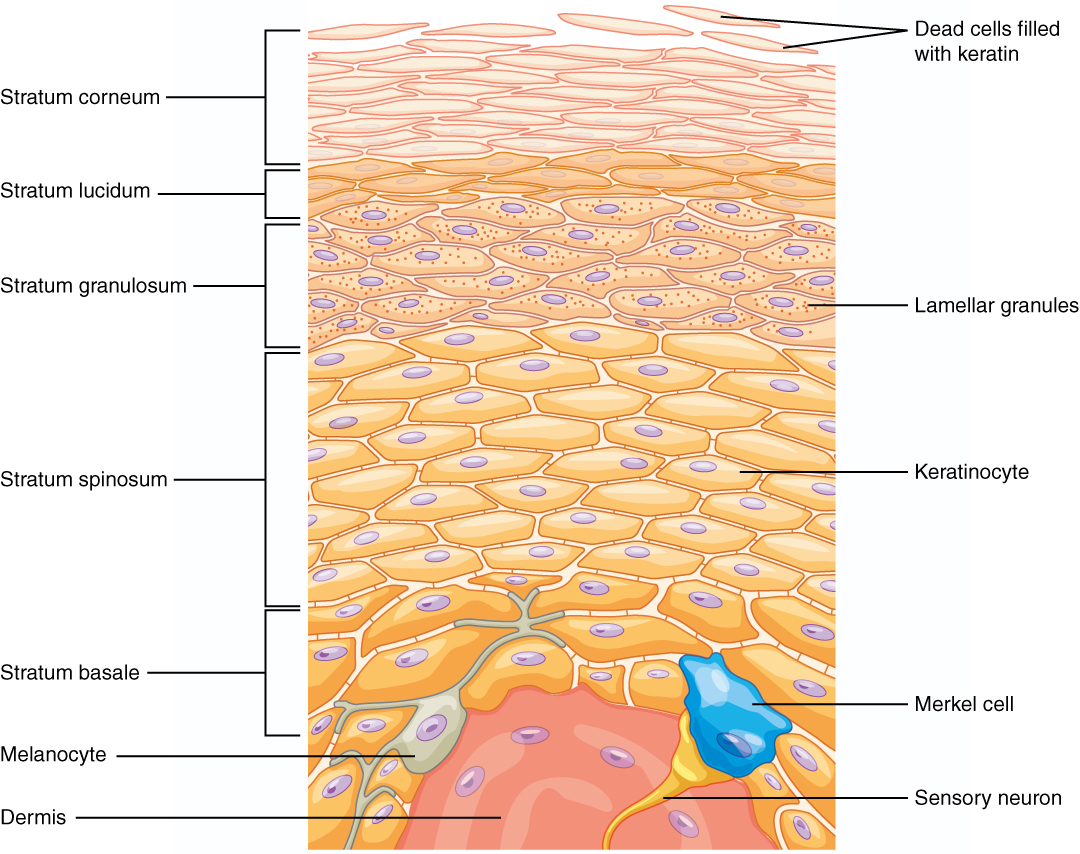 The stratum basale is the deepest layer of the epidermis, serving as the base for the other layers. It lies above the dermis. This layer is made up of cuboidal and columnar cells. There are three types of cells that make up this layer: keratinocytes, melanocytes, and Merkel cells.

Keratinocytes are the most abundant type of cells in the epidermis. They play a special role in that they make keratin, a protein that helps give the epidermis its strength. “Functions of keratin may include resistance to mechanical stress, influence over epithelial cell structure, and making the skin waterproof (3).” Keratinocytes are found in every stratum layer because as they undergo mitosis, a daughter cell is pushed up the stratum layers. However, as it goes up the layers, the keratinocyte begins to die. As seen in Figure 1, keratinocytes dominate most of the epidermal layers.

The third cell that occupies the stratum basale is the Merkel cell, also known as tactile cell. They aren’t as numerous as keratinocytes or melanocytes but play a significant role in our sense of touch. They are sensitive to compression; when they are stimulated, chemicals are released that provide our body with the sensory information of an object contacting the skin.

The fourth type of cell is found in this layer. This cell is called the Langerhans cell, or the epidermal dendritic cell. These cells are important to our bodies as they are immune cells that are tasked with defending the epidermis from infections. “When they undergo phagocytosis, an immune response is activated. This response prepares the body to fight potential pathogens and cancer cells that may have breached the superficial layers of the epidermis (14).”

The third layer is the stratum granulosum. This is the layer in which keratinocytes begin to die, as their nucleus and cytoplasm disintegrate. Replacing their nucleus and cytoplasm is the previously mentioned protein, keratin. This process is referred to as keratinization. In this layer, a structure of keratinocytes begins to look more apparent than any other layer. This structure is known as the keratohyalin granule. “Their primary function is to help bind the keratin together in order to create an impenetrable barrier (7).” They also have glycolipids that contribute to the skin’s waterproof nature.

The fourth layer is the stratum lucidum. As mentioned before, this is only found in thick skin. These areas include the hands and feet, where most of the body’s abrasion occurs. The keratinocytes in this layer are flat and translucent. “In this layer, they are filled with the protein, eleidin. This is the product that results from transforming keratin (14).”

Under the epidermis is the dermis. This layer is made up of connective tissue and contains collagen, with some elastic and reticular fibers. The dermis serves as a placeholder for accessory structures of the integumentary system. These may include hair follicles, blood vessels, glands, and nail roots. The dermis has two of its own layers. These layers are the papillary layer and the reticular layer.

The papillary layer is the most superficial of the two layers. This layer is mostly composed of adipose connective tissue. In the papillary layer, there are projections from the dermis called dermal papillae, as seen in Figure 3. There are projections that go the opposite direction and piece together with the dermal papillae called epidermal ridges. These teeth-like projections create what we see as fingerprints. They act as tactile receptors, much like Merkel cells. They are able to detect any contact with the epidermis. “The dermal papillae each contain capillaries that are responsible for transporting nutrient and blood to the epidermis (14).” The papillary layer also serves as an anchoring site for the arrector pili muscle. This small muscle is what allows us to feel any feeling when our hair is stimulated.

The reticular layer of the dermis lies between the superficial papillary layer of the dermis and the deep hypodermis layer. This layer is made up of dense irregular connective tissue with collagen fibers going in all directions. In this layer is where we find hair follicles and glands. The sebaceous glands are responsible for secreting an oily substance called sebum. This lubricates the hair and skin. Another gland is the sweat gland. This gland releases sweat to help maintain homeostasis by regulating body temperature. Apocrine glands secrete pheromones around the areas of the groin and armpits.

The hypodermis, or the subcutaneous layer, is the deepest layer of the skin under the reticular layer of the dermis. While it may not necessarily be a part of the integumentary system, it has some functions to the skin. “This layer is mostly made of fatty tissue. Because of the fatty tissue, it serves as a cushion and a way to retain body heat. It also serves as an emergency energy source (14).” The hypodermis also serves as a place for collagen fibers of the reticular layer to intertwine and stabilize the skin. As Figure 4 shows, the hypodermis is also a place for large blood vessels and nerves.

As we live our lives, we are prone to dangers and harm to our bodies. As our lives revolve mostly around fire, burns are bound to happen in our lifetime. A burn is an injury in which our skin and adjacent tissues are destroyed. “The severity of the burn is classified based on how deep the injury is, the location of the injury, and the surface area of the injury (19).” Burn injuries may also be classified based on the patient’s age. There are three classifications of burns: first- degree, second-degree, and third-degree.

The worst of the three-burn types is the third-degree burn. This burn completely destroys the epidermis, dermis, and the hypodermis. “Symptoms of this kind of burn are brown, black, or white skin on the area of injury, leathery skin, and numbness (6).” This burn destroys the nerves of the skin, causing numbness. As Figure 5 shows, a third-degree burn injury completely eradicated the epidermis and dermis, as well as damaged the subcutaneous layer. Figure 8 shows a third-degree burn injury. There is blackness in some parts of the burned area, as well as exposed fat under the skin.

A way that the severity of a burn is assessed is based on the “Rule of Nines.” “This method helps when trying to figure out how much surface area of the body was destroyed. This is important to remember because by knowing how much of the body was burned, we can estimate the amount of fluid that needs to be replaced (14).” Most of the body is divided in multiples of 9%. The upper limbs and head each count for 9%, while the lower limbs and the trunk count for 18% each, as shown in Figure 9. However, an infant has different percentage on its body than an adult’s. An infant’s head and body accounts for 18%, the lower limbs are 14%, and the upper limb are 9%. Both groin regions are 1%.

Acne vulgaris, commonly know as acne, is a chronic disease in which the body’s sebaceous glands produce an excessive amount of sebum, or oil, and gets plugged with dead skin cells. This affects about 20% of teenagers aged 15-17. Acne usually happens when a child is in the stage of puberty. Acne usually appears on the face, forehead, shoulders, and the back. Common symptoms of acne include blackheads, pimples, and painful lumps. When dead skin cells and oil become trapped in the pores of the skin, it builds up. “When exposed to the air, it becomes darker in color. There may also be bacteria trapped in the follicles. These are called blackheads (1).” Pimples are also a common occurrence when someone has acne. Pimples are raised spots on the skin. They are usually a red spot with a white circle in the middle of it. This occurs due to build-up of bacteria in the hair follicle, inflaming it. Acne may also cause scarring, as seen in Figure 10. While the damage to the skin may be minor and non-life threatening, it damages many teenagers emotionally and mentally, as it has been linked to increased self-consciousness and depression.

Another skin disease is rubeola, or measles. Measles is a highly contagious disease caused by the measles virus. “Symptoms of this disease are skin rashes followed by fevers and severe coughs. They may also experience gastrointestinal issues (15).” The rashes on the skin start to appear about 3-5 days after the fever starts. It may start at the face and spread to the trunk and limbs. As Figure 11 shows, the rashes spread from the face and covers most of the back and neck. With measles may come other diseases, such as pneumonia or keratoconjunctivitis. Pneumonia affects the respiratory system and is a big contributor to high measles fatalities. Keratoconjunctivitis causes blindness in the patient.

There are several kinds of skin cancer with the most serious being life-threatening. The most common kind of skin cancer is basal cell carcinoma. A major cause of this cancer is the overexposure to ultraviolet lights. Like many other cancers, damage to the cell’s DNA causes a genetic mutation, in which the cell divides rapidly and destroys adjacent tissues. Figure 12 shows the mass of dividing basal cells, creating a mass in the epidermis and dermis layer. “There are mainly three types of basal cell carcinoma: nodular BCC, superficial BCC, and morpheaform BCC (13).” Nodular BCC lesions consist of nodules with a shiny, pearl quality. This lesion may become crusted and larger over time with minor bleeding. Nodular BCC usually affects the papillary and reticular dermis. Superficial BCC lesions appear scaly and pink or purple. This may also become crusty with borders of purple papules. This type of cancer affects the epidermis and no deeper than the papillary layer. Morpheaform BCC lesions appear pink or white and scar-like. This type of BCC is the most severe as it has the most potential for destruction of the skin. It may invade the reticular layer of the dermis, as well as the subcutaneous layer. While its fatality numbers are low, they still cause significant damage to the skin.

The integumentary system may seem simple when looking from the outside, as it seems like a simple layer of skin. However, when looked under a microscope, there is a complex network of cells and nerves that communicate to protect our bodies. Of course, while the cells’ primary role is to protect our bodies, we are still prone to diseases and injuries to our skin. the integumentary system plays a vital role in keeping our bodies in homeostasis, which in turn, allows us to live.