The protocol of laboratory 3 & 4’s: Maximal exercise, testing consists of monitoring an individual’s maximal oxygen uptake. This is achieved by attempting to get their heart rate to surpass their max rate, blood lactic acid reaching between 7.9-8.4mM, or reaching fatigue and failure to continue before reaching max. Data collected from maximal oxygen uptake is vital information that soccer players can use to better improve their performance during game time. Assessment is conducted using a treadmill or cycle ergometer. To tests for VO2 max it can be done both indirectly and directly. Direct testing constitutes the use of monitored exercises where an individual is hooked up to a tank and monitors to measure their aerobic capacity, oxygen intake and carbon dioxide output. The second way to measure VO2 max is through indirect testing. This is done without the aid of gas composition machinery, instead an individual’s exercise VO2 max is determined using a formula where an approximation can be made.

To measure VO2 max indirectly using a treadmill can be achieved by using the formula VO2 (mL/kg/min) = (0.2 x S) + (0.9 x S x G) + 3.5 mL/kg/min. This formula takes into considerations speed expressed as (S), body mass in (Kg) and Percentage grade as (G). The speed and treadmill elevation increases in increments per minute till fatigue or target heartrate is achieved.

Once the athletes reaches their VO2 max, the data can be reviewed and determine if whether to increase the training volume or intensity to further improve their ability to take up oxygen throughout the body. Soccer players can especially benefit from VO2 max testing because games last the duration of 90 minutes, averaging running ten kilometers a game. Typical soccer games involve all sorts of physical activities from jogging, running, sprinting, kicking, ball handles and physical pushes which all require an explosive amount of energy. Soccer players endure high intense physiological strain seen especially in professional teams. In order for soccer players to compare with professional teams a great deal of training on aerobic capacity is needed (Castagna, Chamari, Stolen and Wisloff, 2012). The cycle ergometer and treadmill max VO2 test, effectively mimics the environment matched on the field in terms of running capacity. This ultimately gives the player an advantage to further train and enhance their ability to efficiently use oxygen throughout the body.

Soccer players use both aerobic and anaerobic pathways, but most dominantly rely on the aerobic component of performance (Manna, Khanna, & Dhara, 2010). Because the aerobic component of soccer players are more heavily relied on, the expected average Respiratory Quotient (RQ) or Respiratory Exchange Ratio (RER) would be approximately 0.7. An RQ/RER of 0.7 is optimal fat burning, so the fuel source that soccer players use are primarily fats (Plowman & Smith, 2011). Wisloeff et al. (1998) argues that for soccer athletes, maximal oxygen uptake should be conveyed in relevance to body mass. Although soccer athletes are to obtain a body mass index (BMI) of normal range, body types and size can differ. Because body types can differ, a soccer athlete may be mesomorphic, endomorphic, ectomorphic, and body types play a factor in one’s resting metabolic rate (RMR) (Hazir, 2010). In relation to body type, body size also contributes to RMR. Heat loss is greater when the body’s surface area is greater, so for smaller bodies, a higher RMR is needed to maintain body temperature (Plowman & Smith, 2011). Factors such as body type/BMI, and body size are all contributors to a soccer athletes RMR. Age is also a contributor, but a decrease in RMR is usually seen around the age of 60 because this is an age in which a reduction in energy intake and volume of exercise is exhibited (Rachel, Van, Dinneno, Seal, & Jones, 2001). It is not common for a soccer athlete to continue playing competitively at age 60, and so age is not a huge influence to RMR relating to young soccer athletes.

Furthermore, athletes who play soccer are required to have better endurance training compared to athletes who play other sports, such as sprinters. As such, they are able to increase their stroke volume while retaining the ability to maintain a lower heart rate (Palatini, 1988). In turn, this leads to soccer players exhibiting more effective recovery rates; this also suggests a greater diastolic volume, contributing to the efficacy of the stroke volume (Tahir et al., 2015).

The cardiovascular responses seen in elite level soccer players are also seen in recreational soccer players, albeit to a lower magnitude (Castagna et al., 2007). The aerobic requirements of the sport develops cardiovascular fitness. As such, anyone who participates will see the associated benefits. Additionally, similar results are seen in a wide range of participants independent of age, sex, and health status. This is crucially important in factors such as exercise prescription and lifestyle interventions because vulnerable groups of sedentary individuals would be able to improve their cardiovascular health and fitness while partaking in an activity they inherently enjoy (Lin et al., 2015).

Soccer players are required to work at varying intensities during a game. Sometimes they are required to do this in environments that vary in temperature. As a result, hydration is very important, especially in a hot environment. A study, highlighted that there may be cause for concern of heat exhaustion, electrolyte loss, and dehydration in soccer players playing at any level (Shirreffs, Aragon-Vargas, Chamorro, Maughan, Serratosa & Zachwieja, 2005). The researchers conducted a study where male soccer players sweat loss, solute loss and fluid replacement patterns are observed (Shirreffs et al., 2005). The players were all elite professionals; they were provided with their own water bottles that were weighed before and after their training session. The results showed that on average the players only had 45 Â± 16% of their sweat loss replaced during the session. As a result, the players failed to completely replace the fluids that they had lost (Shirreffs et al., 2005). The percent dehydration of all the players 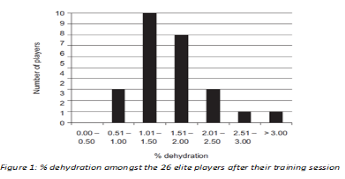 These levels of dehydration may be relatively low but they can have a negative impact on exercise and cognitive performance. At a level above 2% dehydration, cognitive function has shown to be adversely affected. A level of at least 1% is enough to have an impact on exercise performance (Shirreffs et al., 2005). An explanation for the decrease in performance is related to blood volume that is lost when a lot of sweat is lost. During exercise, it is important to maintain blood flow to the muscles and to the skin. The skin is then able to convect heat to the body surface. When there is difficulty meeting these requirements, the core temperature of the body rises (Shirreffs et al., 2005). This elevated core temperature then causes fatigue. Therefore, players that are not well hydrated will fatigue faster and as a result will not be able to perform as well.

Muscle fatigue affects soccer players in a unique manner to other sports. Although muscle fatigue is common among players, it is unclear what the underlying mechanisms of fatigue are. In the later stages of activity, it is understood that fatigue results as muscle glycogen stores deplete. However, in the initial stages of exercise, soccer players are shown to have reductions in muscle pH to a lesser extent than athletes who participate in other sports (Bangsbo, Iaia, & Krustrup, 2007). Additionally, the phosphocreatine systems remain elevated throughout the activity (Mohr, Krustrup, & Bangsbo, 2005); as such, it takes longer for the dominant energy pathway in the muscles of a soccer player to transition from the phosphocreatine system to the anaerobic and aerobic glycolytic pathways (Bangsbo et al., 2007).

Current research suggests that the periods of greatest muscle fatigue (thereby showing the greatest decline in athletic performance) occur at beginning of the second half of play, and towards the end of regulation (Mohr et al., 2005). This is widely attributed to the decrease in muscle temperature after the halftime break, and to depletion of glycogen stores at the end of play (Mohr et al., 2005). This is deemed a result of the effect of temperature on the rate of metabolic reactions within the working muscle, specifically ATP hydrolysis and regeneration (Ferretti, 1992). The recommendation for soccer players is to engage in low-intensity activity prior to the beginning of the second half to moderate the decrease in muscle temperature, and therefore maintain athletic performance throughout the game (Lovell et al., 2013; Mohr et al., 2005).