How is the inotropic state of the heart regulated physiologically and how can it be changed pharmacologically?

The heart is the muscle responsible for moving blood through the body in a continuous, subconscious contraction mechanism. The inotropic state of the heart is in reference to the contractility of the heart. Cardiac contractility is the ability of the heart to adjust heart rate preload or afterload. Blood is essential for transporting oxygen, among various other functions, and when cells do not get oxygen via the blood they die. Thus, the heart is essential and people die when their hearts stop from a lack of oxygen to vital organs. The inotropic state of the heart is important, and the body has mechanisms for making sure the heart’s contractility is maintained. However, there are times where the natural, physiological, mechanisms fail and medicine is used. Various classes of pharmacology are used to regulate the heart, when the body cannot itself.

Cardiac contractions at rest pump four to six liters of blood per minute. During strenuous exercise the heart can pump four to seven times as much. Heart pumping is regulated via two pathways: intrinsic regulation due to changes in volume of blood flowing into the heart, and regulation through the autonomic nervous system by controlling heart rate and strength of pumping. Venous return, the rate of blood flow from the veins into the heart, determines the amount of blood pumped from the heart. Each peripheral tissue of the body controls its own blood flow and all local tissue combines and returns to the right atrium by the veins. From the right atrium the blood is then pumped back into the veins and so the circuit continues. The Frank-Starling mechanism states the greater the heart muscle is stretched during filling, the greater the force of the contraction will be, and the greater amount of blood is pumped into the aorta.

The frank-starling method as depicted in figure 1.1 is explained by several factors. When there is an extra amount of blood in the ventricles the muscle is stretched to a greater length. This length grants a better degree of overlap between actin and myosin filaments for greater force generation resulting in a greater contraction. The ventricle then pumps more into the arteries. The heart isn’t unique in this mechanism as the frank-starling pathway is a characteristic of all muscle.

Excitation of the Heart by the Sympathetic Nerves

Cardiac output is defined as the amount of blood pumped each minute under a given atrial pressure. Cardiac output can be increased by more than 100% through sympathetic stimulation. Under normal conditions the nerve fibers to the heart discharge automatically with a slow rate which keeps pumping about roughly 30% above the no sympathetic stimulation level. Inhibition of the nerves can decrease cardiac contractions moderately. When the nerves are depressed the heart rate is decreased and the strength of the contraction is decreased which in turn decreases the level of cardiac pumping up to 30%.

Stimulation of the parasympathetic nerves can decrease cardiac output by 30%. Strong parasympathetic stimulation can stop the heart’s beating for a few seconds but then the heart rate returns to 20-40 beats per minute. The great decrease in heart rate it causes along with a slight decrease in heart contraction strength can decrease ventricular pumping by at least fifty percent. The stimulation is distributed mostly to atria, not many ventricles where the power contraction of the heart occurs.

The Role of Potassium Ions

Too much potassium in extracellular fluids is a major problem for the heart. Excess potassium causes the heart to become dialated which slows heart rate. Additionally, large quantities can block conduction of the cardiac impulse from the atria to the ventricles. This is a result of potassium at high levels decreasing the resting potential of the membrane in cardiac muscle fibers. The cell membrane becomes depolarized, and thus the membrane potential is less negative. The intensity of the action potential decreases, and thus the contraction of the heart is weakened.

The Role of Calcium Ions Calcium enters the cell via the action potential. This small amount of calcium releases more by activating RyR— the calcium release pathway of the sarcoplasmic reticulum. The calcium ions then bind to troponin C, which activates the cross bridges of actin and myosin causing myocyte contraction. After the contraction the calcium is transported back into the sarcoplasmic reticulum by the SERCA enzyme, to be eliminated out of the cell by the NCX protein.

Heart failure is a result of the three step calcium process going wrong. In the SR the calcium leaks through the RyR decreasing the amount of calcium. Then, the SERCA protein levels are decreased inhibiting reuptake. Increased levels of NCX eliminate more calcium out of the cell. Heart failure occurs primarily due to decreased levels of calcium ions. The effects of increased levels of calcium ions are virtually the exact opposite of potassium as the heart goes into spastic contraction. Calcium ions are responsible for initiating the cardiac contractile process. Calcium is regulated in a very small range. 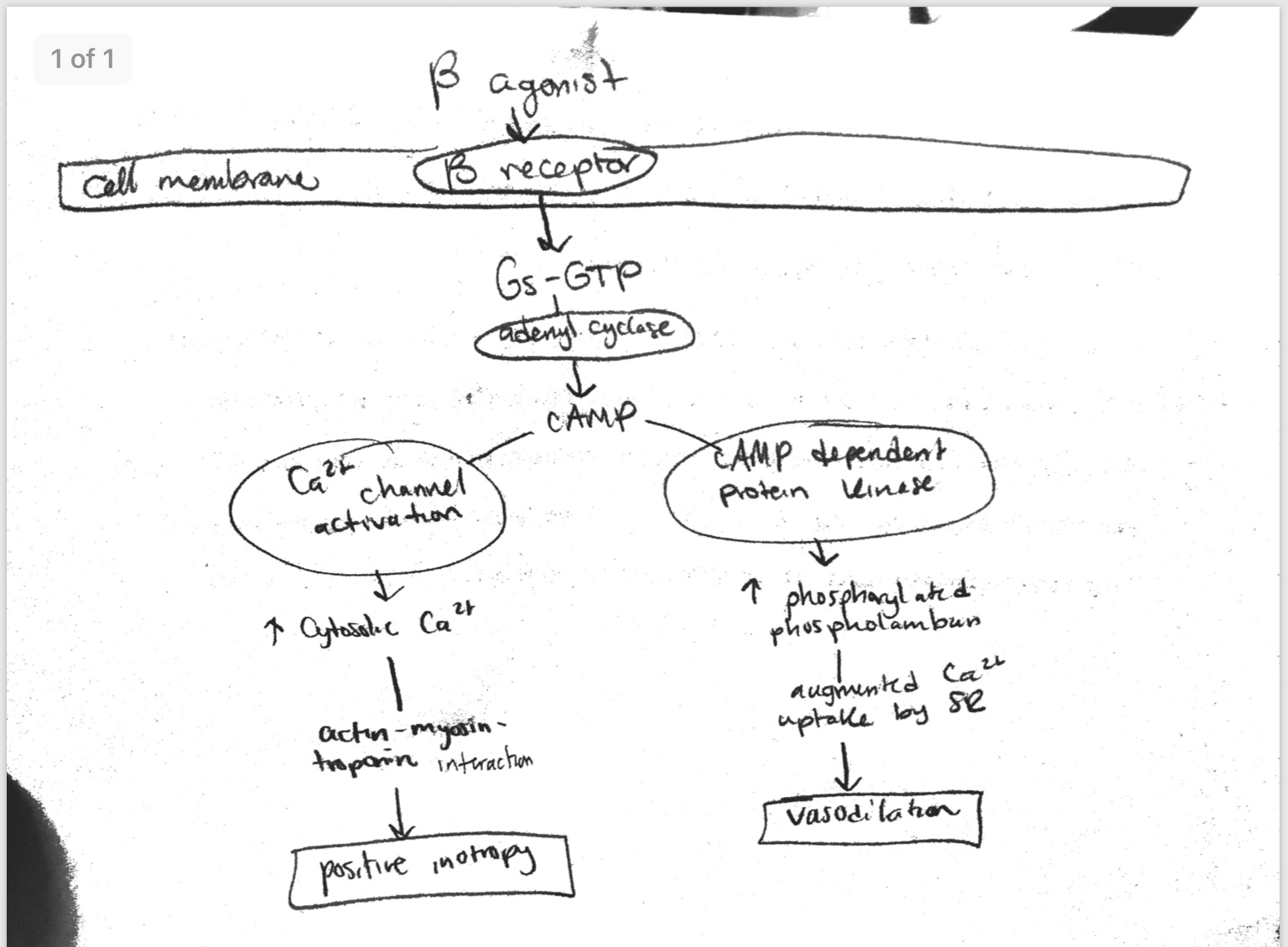 Inotropes are drugs which alter the contractility of the heart. Positive inotropes increase the pumping of the heart, while negative inotropes weaken. They are mainly used medically in patients with low cardiac output. Low cardiac output is dangerous because it can lead to tissue hypoperfusion, lack of deliverance of oxygen and vital nutrients to cells leading to organ death, and hypoxia, the lack of oxygen in cells. Organ death occurs due anaerobic metabolism acquiring  a build-up of lactic acid.

Inotropes work by increasing cardiac output. Cardiac output in turn increases mean arterial pressure which maintains the passage of blood to organs and tissues through the veins. Inotropes work to increase cytosolic calcium levels as seen in figure 3.1, either by increasing release from the sarcoplasmic reticulum or by increasing influx of calcium during the action potential. There is no evidence of one inotrope being better than another, so the choice of inotrope determined by the patient’s needs and the clinicians discretion.

Vasopressors increase vasoconstriction which increases systemic vascular response (SVR). This increases mean arterial pressure and increased perfusion to organs. Vasopressors work to increase CO, SVR, and  HR as well as inducing vasoconstriction. They affect the alpha and beta receptors as seen in figure 3.1. The alpha receptors mainly deal with increasing SVR by means of peripheral vasoconstrictors. Beta one receptors mostly have positive inotropic effects on the heart, while beta two receptors act as vasodilators.

Catecholamines are the most commonly used vasopressors, and can be either endogenous or synthetic. They work by acting on the sympathetic nervous system by stimulating the alpha and beta adrenergic receptors. Beta one is the main receptor involved in the rate and force of contraction. Catecholamines increase contractile force by the beta-adrenoceptor-adenylyl Cyclase system or by stimulating alpha receptors.  Via the protein kinase A the beta adrenoceptor phosphorylates calcium channels which allows for more calcium ions to enter the cell from the sarcoplasmic reticulum. Calcium gets binded by troponin-C, and this enhances myocardial contractility through increased cross bridge interactions. Further, catecholamines have a short half life and are thereby given by continuous infusion.

Adrenaline as a Vasopressor

Adrenaline is an endogenous catecholamine. It has activity at all adrenergic receptors, and as a result is much less specific than others. Its lack of specificity makes it less appealing to be used. It is mainly used in resuscitation after cardiac arrest. It’s side effects include increased blood lactate levels, hyperlactatemia, and hyperglycemia, high blood glucose levels. Adrenaline is not recommended for cardiogenic shock, when the body suddenly cannot pump enough blood to meet the body’s needs because specificity is needed.

Dobutamine as an Inotrope

Dobutamine is a common inotrope which increases contractility and heart rate. It is used when heart failure occurs but is potentially reversible, such as in cases of cardiac surgery, septic or cardiogenic shock.  It is a beta one agonist primarily, but also works at beta two receptors by increasing vasodilation and decreasing the afterload, simply put the pressure the heart must work against to pump blood. Dobutamine has been linked to serious side effects such as: hypokalemia, low potassium concentration in blood, and local tissue necrosis. Current inotropic drugs have failed to show long term benefits in patients with heart failure. New drugs are being developed to combat this. Istaroxime, Figure 4.1, is an inotropic agent which works at the sodium potassium ATPase to inhibit it. The inhibition causes an increase in intracellular sodium and decreases calcium elimination outside of the cell. Cytosolic calcium levels increase and can cause issues such as arrhythmias. An additional agent which increases the uptake of calcium into the sarcoplasmic reticulum may be useful. Through animal trials it has potential to have increased inotropy and relaxation with less energetic expenditure.

The heart has to be able to pump blood efficiently to keep oxygen supply at a healthy level in the various organs of the body. The amount of blood pumped through the body varies with the strenuity of exercise. Contractility of the heart is what is studied when looking at inotropic regulation. This is mainly maintained physiologically by the use of calcium and potassium. Drugs are used pharmacologically to regulate the heart in times of need such as septic shock. These drugs make use of the body’s mechanisms to return the heart to normal. Many of the drugs used to treat the heart come with undesirable side effects, and research is being conducted to find better measures to help people.