Most of the nutrients in the feed are large molecules that can not be directly absorbed in the gut due to their size or hydrophobicity. The digestive system is responsible for the reduction in the size of these molecules directly absorbable smaller units and the conversion of hydrophilic molecules with hydrophobic complexes. Proper operation of absorption and transport mechanisms is essential for the delivery of products of digestion in human body cells . An abnormality of one of these systems can cause malnutrition even in the presence of adequate nutrition . 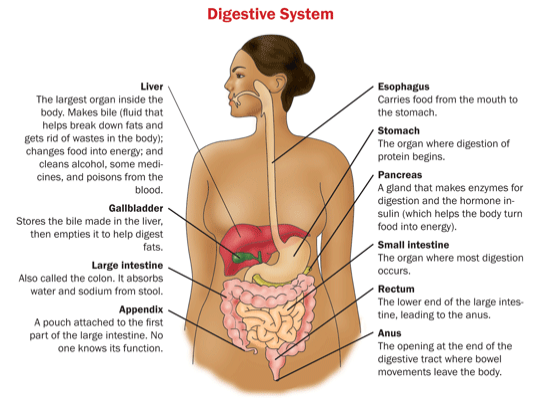 The task of the digestive system is the physical and chemical breakdown of food. In addition, energy needed by the body , as well as raw materials for growth and repair of body structures come from the food and drink that ingerimos. In the digestion process are the following functions: Test food through the senses of smell and taste, food crushing , dissolution in water, food transport crushed decomposition of food into simple substances with the aid of digestive enzymes, absorption simple substances, and elimination of indigestible residues.

Digestive functions traction and secretion are controlled by two main types of regulation: the nervous regulation and hormonal regulation .

Nervous regulation of motor and secretory phenomena uses two types of neural networks : a local system , the enteric nervous system and the autonomic nervous system (ANS ). Nerve receptors are sensitive to various stimuli : the chemical composition of the chime

The substances that the body needs are absorbed from food , it passes through the digestive system. When chewing food, it is moistened by saliva. As food is sufficiently fragmented and wet mouth are pushed by the tongue into the pharynx and swallowed. The muscles in the walls of the esophagus contract and relax to cause movement in waves, known as peristalsis, which lowers food into the stomach. In this , mixed with acidic juices produced by the wall of the organ. These juices facilitate the fragmentation of food in even smaller particles , the muscles of the stomach wall also contract , and facilitating the greater fragmentation.

Thereafter , they pass into the small intestine where certain products contained in the digestive juices , known enzymes continue the degradation of food in nutritional components which are absorbed by the blood through the walls of the small intestine. Leftover food particles , which are not digested in the small intestine pass into the large intestine where water is absorbed. The remaining food is a partially solid waste is gradually propelled along the large intestine and takes the form of feces reach the rectum. The depositions are stored in the terminal portion of the digestive tract and are then expelled through the anus.

The esophagus is a tube or membranous muscle that extends from the pharynx to the stomach. Incisors to cardia ( portion continues where the esophagus and stomach) there are about 40 cm. Esophagus begins at the neck, chest and traverses into the abdomen through the esophageal orifice diaphragm . Usually it is a virtual cavity ( ie that its walls are joined and only open when the bolus passes ) . Measure reaches the esophagus 25 cm and has a structure consisting of two layers of muscles which allow contraction and relaxation of the esophagus downward . These waves are called peristalsis and is causing the progress of food into the stomach. It’s just a passage of the bolus , and is the union of different holes , oral , nasal , ear and larynx. 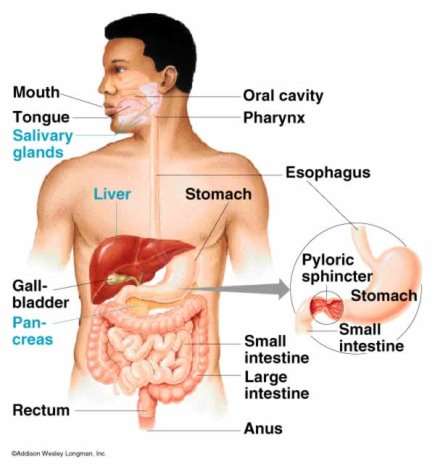 The stomach is an organ so that varies depending on the state of repletion (amount of nutritional content present in the gastric cavity) that is usually shaped J. It consists of several parts that are: fundus, body, antrum and pylorus. Its less extensive edge is called the lesser curvature and a larger curvature. The cardia is the boundary between the esophagus and stomach and pylorus is the boundary between the stomach and duodenum. In an individual measures approximately 25cm cardia to the pylorus and the transverse diameter is 12cm. To see what is inside the stomach click here.

The large intestine . starts from the ileocecal valve in a blind pouch called from where the vermiform appendix and ends at the rectum . From the cecum to the rectum describes a series of curves , forming a frame in the center of the handles are yeyunoíleon . Its length is variable between 120 and 160 cm , and its size gradually reduces , being narrower in the region where it joins portion rectum or rectosigmoid junction, where the diameter is usually not exceed 3 cm , while the blind is 6 or 7 cm.

Gland is intimately related to the duodenum, the excretory duct of the pancreas, which ends meet with the bile through the ampulla of Vater, their secretions areimportant in the digestion of food .

The liver is the largest internal organ of the body weighs 1500 grams. It consists of two lobes. The bile ducts are the excretory ducts of the liver , bile for them is driven into the duodenum . normally get two channels: left and right , that converge together to form a single duct . the hepatic duct receives a finer duct, cystic duct coming from the gallbladder housed in the visceral side of liver. Meeting of the cystic duct and the hepatic bile duct , descending duodenum , into which together with the excretory duct of the pancreas is formed. The gallbladder is a reservoir musculomembranous shunted on the main bile duct. It contains about 50-60 cm3 of bile. Is oval or slightly pear-shaped , and its major diameter is about 8 to 10 cm .

The spleen , for its main functions should be considered an organ of the circulatory system. Its size depends on the amount of blood contained therein.

The gastrointestinal tract is responsible for the digestion of the ingested food , so that they can be used by the body . The process of digestion begins in the mouth where food is covered by saliva , crushed and divided by the action of chewing and once formed the bolus swallowed . The stomach is not an essential organ for life, for though his removal in man and animals cause certain digestive disorders, not fundamentally affect health.

In humans , the essential function of the stomach to reduce food to a semi-fluid mass of uniform consistency called chyme , which then passes into the duodenum . The stomach also acts as a temporary reservoir for the acid foods and their secretions , has some antibacterial action.

The chyme passes the pylorus and enters the duodenum intervals where it is transformed by the secretions of the pancreas , small intestine and liver was continued digestion and absorption. Chyme is progressing through the small intestine until it reaches the large intestine.

The ileocecal valve too fast hinders the emptying of the small intestine and prevents reflux of the contents of the large intestine to the small intestine. The main function of the large intestine is the formation , transport and disposal of feces. A very important function is to absorb water. In the cecum and ascending colon faeces are almost liquid and that is where the greatest amount of water and some dissolved substances are absorbed, but also in more distal regions ( rectum and sigmoid colon) liquids are absorbed.

Digestion of food is effected by hydrolysis using digestive enzymes and cofactors such as hydrochloric acid or bile . Cofactors are also involved in the mechanisms of absorption. Enzymes are of 2 types: exoenzymes and endoenzymes.

Digestive enzymes are exoenzymes mainly synthesized by specialized cells of the mouth, stomach , pancreas or small intestine and that are released in the digestive light to catalyze the hydrolysis of the food to the outside of the cell .The enzymes are endoenzymes localized on the membrane lipoproteins digestive mucosal cells . The connection to their substrate therefore when those latter penetrate into the cell. Ingested food are absorbed about 95%. The water , inorganic salts , monosaccharides , vitamins and alcohol are absorbed without change. As against , disaccharides , polysaccharides , lipids and proteins are to be transformed by hydrolysis into simpler components before being absorbed.

The appearance, smell and taste of food served modifies the emotional climate during the meal which influences the digestion of ingested food. Indeed , salivary secretions , gastric , etc. . and alter motility of the digestive tract . Emotions such as fear , anxiety or anxiety act via the hypothalamus and the autonomic nervous system affect digestion by reducing secretions , inhibition of peristalsis and increased sphincter tone .

The Endocrine System and Its Working

The endocrine system is a term for all the organs and tissues that produce hormones. They are distributed throughout the body and can show effects over long distances on:

The endocrine glands are organs, but who have no ducts, because they distribute their products directly into the blood or an autocrine or paracrine effect, however. Therefore, there is at this tissue with a dense network of blood capillaries with windowed endothelium. Exocrine gland secretions free to oppose it with their inner or outer surfaces: on the skin, on the wall of the stomach or in the pancreatic ducts. The hormone-producing tissue can be divided into three groups:

Location and Function of 3 Endocrine Glands 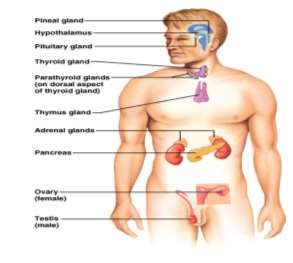 Developmentally, the thyroid gland goes out of the intestinal epithelium of the pharynx bottom out on the tongue base. This gland stands at the beginning of the development through the ducts thyroglossus still with the floor of the mouth in combination and is located in front of the trachea after a descent. Anatomically, the thyroid gland is composed of two lobes, which are on an isthmus that is sometimes formed as a real pyramidal lobe, in conjunction. Without thyroid hormones cannot live. The thyroid hormonetriiodothyronine (T3) and thyroxin (T4) are iodized. They work in almost all body cells and stimulate there on the energy metabolism. The thyroid itself is in terms of a control system by the hypothalamic hormone TRH (TSH-releasing hormone), and originating from the pituitary TSH (thyroid-stimulating hormone) in their function regulated (Hiller-Sturmhofel, 1998).

These islands consist of a net-like organization of several thousand epithelial cells arranged in groups and are crossed by numerous capillaries with windowed endothelium (Carter, n.d.)

The pituitary gland is located at the underside of the brain and is composed of three parts. In contrast, the anterior pituitary produces own hormones. The activity of its cells is determined by complex humeral and neural mechanisms regulated (= control hormones). It is above all the hypothalamic releasing – and release-inhibiting hormones that play an important role (Drake, 2010)