Abstract— Knee pain often disrupts the performance of Islamic prayer (Salat). Development of rehabilitation tool for Muslim population with knee pain has become an increasing demand. Electromyogrpahic (EMG) activity of knee muscles may be an assessment tool of such rehabilitation technology. In this study we investigate EMG activity of four leg muscles associated with knee for both healthy and subjects having knee complications. The muscles are from hamstring (biceps femoris long, semitendinosus) and thigh (vastus medialis, rectus femoris) region which influences standing and knee flexion during Salat. We considered five time-domain features of the EMG signal for comparison between healthy and subjects with knee pain. Our results suggest that, overall all four muscles are affected due to the knee pain and thus show abnormal activity in standing and knee flexion. It has also been found that, hamstring muscles were more affected than thigh muscles while performing knee flexion.

Performing Islamic prayer (Salat) five times a day is obligatory activity for Muslims all around the world. Salat has been considered as one of the daily activity with therapeutic advantage of meditation [1][2]. In this physical exercise there are four positions of slow movements called standing, bending upper body (bowing), prostration and sitting. However, many adult Muslim citizens cannot perform Salat properly due to knee pain. Specifically, positions in Salat require a constant movement of upper and lower body muscles. For instance, full knee to flexed during transition from standing to prostration position. Electromyography (EMG) based assessment has become one of the most popular tools in the development knee rehabilitation methods. Any irregularity in muscular functions can be identified more precisely by the EMG activity. EMG has been used to assess the muscles activity during daily life activity involving body movements such as sitting, walking and weight lifting. The body movement during the prayer results a gentle exercise of the muscles in upper-limbs as well as lower-limbs of the body. In this study we investigate the EMG signal activity of four leg muscles known as biceps femoris long (BF), semitendinosus (ST), vastus medialis (VM) and rectus femoris (RF) which influences knee function during Salat. We investigated both healthy and subjects with knee complications to understand the difference in the knee muscular activity during Salat.

In addition to the above, the EMG activity was investigated for identifying lower back pain in the forward flexion of lumber paraspinal muscles (which is similar to bowing in Salat) by Watson et al. [13]. Apart from the above, Salleh et al. investigated the electroencephalogram (EEG) signal activity during Salat  [14]. The study demonstrated the EEG spectral analysis on the specific position of Salat such as prostration. So far, no study was found to investigate EMG activity with knee pain during Salat. In this study we investigate the four large muscles which can produce a huge amount of force during lower limb activity in Salat. Results found in this study may be useful to develop rehabilitation program for those who has trouble to perform Salat.

The EMG data in this study was collected from online database [15]. Five healthy and five subjects with knee complications participated in the data collection. The knee complications include long term arthritis and pathological treatment including surgery. All the experiments procedures were conformed to the principles of the Declaration of Helsinki and were approved by the local Human Research Ethics Committee of the University.

Subjects were asked to stand for ten sec. with knee flexion in every three sec. Therefore, there are three flexions in the trial. EMG signal was recorded from four muscles on ten subjects in single trial. There were two trials for each subject resembling to a two-rakat Salat.

B.  EMG Acquisition and Signal Processing

A four-channel Datalog (Model MWX8) EMG sensor was used to record the EMG signal. This sensor is a touch proof with Bluetooth facility. A sampling frequency of 1 KHz is used for EMG recording which is pre-amplified by a 6th order Butterworth bandpass filter of frequency range 30-400 Hz. Next, the EMG signal was rectified to remove common modes and noises. Finally, a 4th order Butterworth lowpass filter of 6 Hz was applied to achieve the muscle activation pattern by removing the high frequency components. The distance between the EMG sensors and a Bluetooth enabled laptop was three feet. Three silver chloride (AgCl) surface electrodes were used; two for input (+v, -v) and another one for reference or ground. The placement locations of electrodes were chosen along with the direction of muscle fiber of four leg muscles.  The distance between the electrodes was considered as approximately 4 cm to avoid crosstalk signal coming from neighboring muscle.

After the acquisition, the EMG data was processed offline by windowing and filtering the extracted signal. Signal processing was performed using MATLAB® software. The normalized EMG amplitude was calculated for further analysis of mean and SD values. After recording, statistical analysis was performed using Minitab® software. Significance differences in the EMG amplitude were detected through repeated-measures analysis of variance.

represents the k-th sample of EMG signal and N denotes the length of the signal. With the similar notations,

Note that, ZC was measured in percentage which give us an estimate of fluctuation of EMG during muscle activation.

Among five time-domain features, IEMG, MAV, and RMS indicate the muscle force during knee flexion while other two features such as, VAR and ZC will give us an estimate of variation of the muscle activation during knee flexion. Fig. 1 presents the IEMG feature of EMG activity. As demonstrated in the figure, ST muscle provides maximum force among four muscles while, other three remain almost same. On the other hand, ST muscle is unable to provide necessary force in the subjects with knee pain.  However, RF and VM produce more force than healthy group. Almost similar trend was followed in MAV and RMS features as shown in Fig. 2 and Fig. 3 respectively. As illustrated in the figure, RF, BF and VM provide almost same level of force in addition to the maximum level of force provided by ST muscles in healthy subjects. But for the subjects with knee pain, the muscles force generation is inconsistent. As demonstrated in Fig. 3, the level of force generated by BF and ST was very low when compared with RF and VM muscles. This inadequate support from two muscle may cause disruption of knee flexion during Salat.

Fig. 4 and Fig. 5 present VAR and ZC feature of EMG activity respectively. As illustrated in Fig. 4 RF, BF and VM have almost same variance while ST muscle shows a high variance in healthy subjects. On the other hand, VM shows highest variance for subjects with knee complications. In Fig. 5 we demonstrate the ZC values of EMG recorded from four muscles. As depicted in the figure there is almost same low fluctuation in the RF, VM and ST muscles activation while BF muscle shows high fluctuation in healthy subjects. An opposite muscle activity was sound in subjects with knee pain. For instance, ST and VM muscles exhibit highest and lowest ZC rate respectively. The variability of ST muscle activity between healthy and knee pain was found significant in all features (p<0.05). This implies that, the activity of ST muscles is more vulnerable than other muscles during Salat performance.

With the investigation of EMG activity of four large muscles in leg, in this study we attempt to understand the abnormality of muscle activity during standing and knee flexion in Salat. It has been found that the hamstring muscles produce higher force than thigh muscles. The hamstring muscle specially, ST muscle produce highest force among four leg muscles associated with knee flexion. Both thigh muscles, RF and VM almost consistent in muscle force generation. One of the key results of the study is the inconsistent muscle force generation in the subjects with knee complications. It has been found that, ST muscle cannot produce as much as necessary during knee flexion. Therefore, the support from hamstring 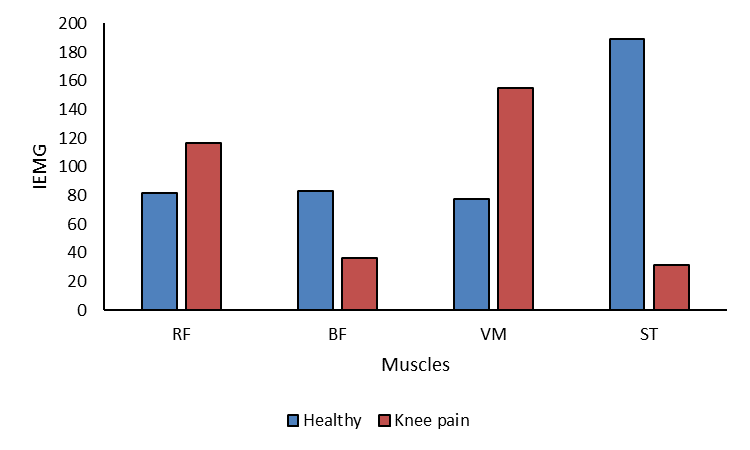 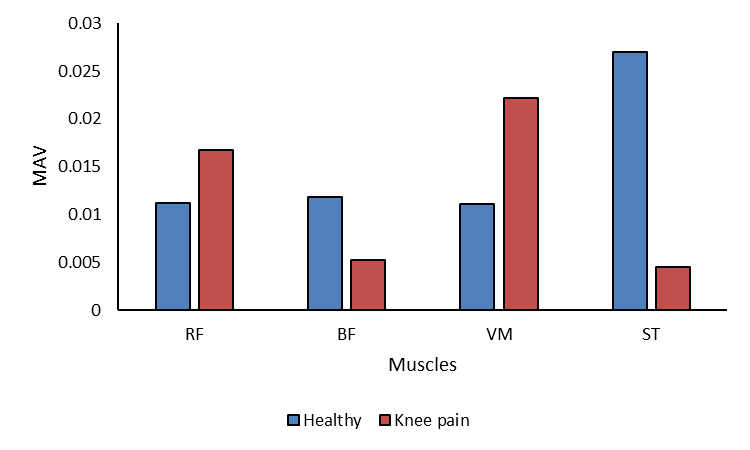 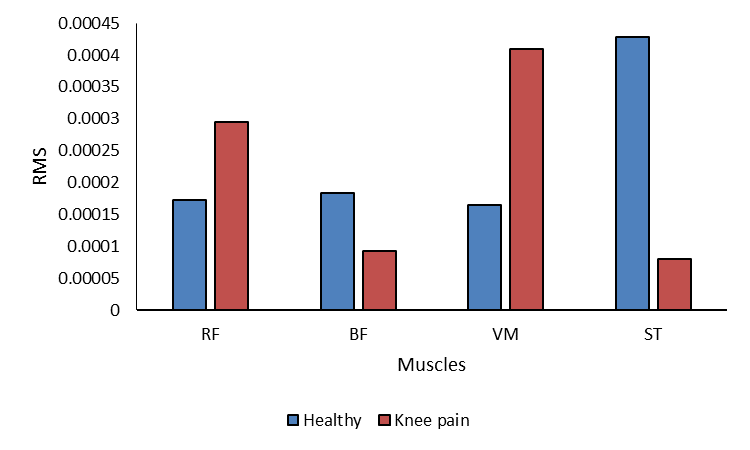 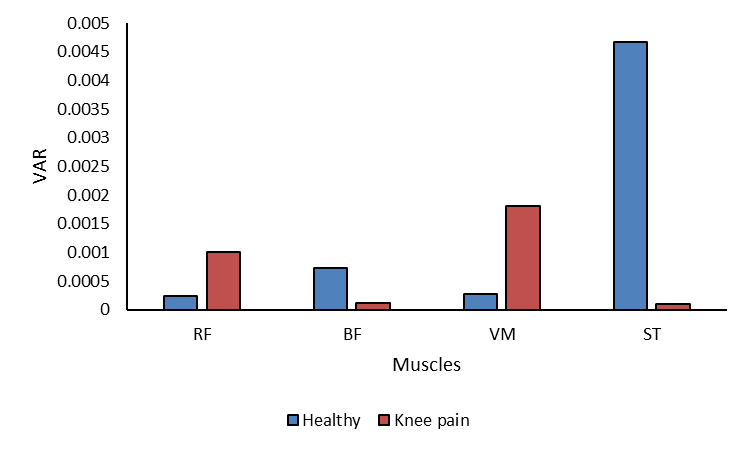 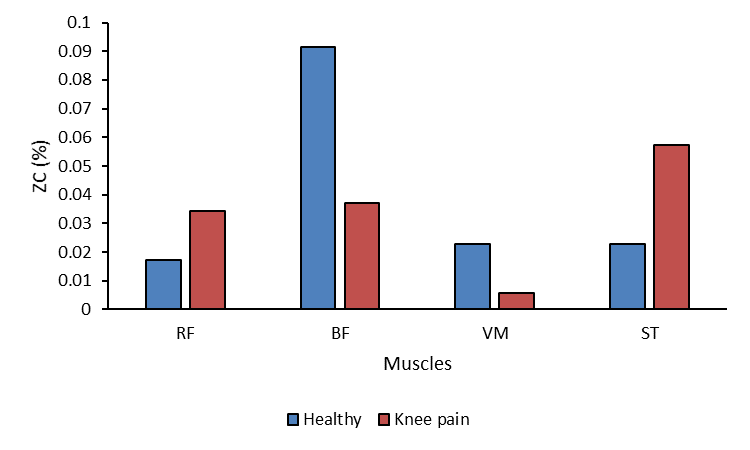 muscles is comparatively lower in knee impaired population than healthy subjects. In addition, the force produced by VM muscle is higher in knee pain when compared with healthy population. This implies that, the muscles contraction is thigh region is inconsistent due to knee complication. This unbalanced force generation in hamstring and thigh muscles may cause disruption of Salat performance in knee pathology population.

While comparing the fluctuation of EMG activity in the muscles it has been found that, the ZC rate of BF is high in healthy population while ST shows the high rate in knee complication. This implies that, the muscle contraction is supposed to be constant in RF, VM and ST muscles during knee flexion. On the other hand, due to the knee pain the contraction is fluctuated in ST muscle. The hamstring muscles are found comparatively more fluctuated in knee pathology than healthy population.

Despite our rigorous effort, there are few limitations of the study. For example, the subjects of the study were not actually performing Salat. The subjects were performing a task which was similar to performing standing position in Salat. Subsequently, the muscle activity was studied in knee flexion. However, the results would have been more appropriate if thesubjects were performing Salat. The number of was limited to five in healthy and five knee pathology group. Larger population will be studied in future. Knee pain is one of the common muscular complications among the senior Muslim citizens which often restrain them to perform Salat in ideal approach. The findings of the study may be useful to assess the knee pain and to develop rehabilitation program for the population who are suffering from the knee pain but wish to perform Salat in appropriate manner.

In this paper, we investigated the muscle activation behavior of four leg muscles in standing positions of Salat for healthy and subjects with knee complications. It has been found that, with knee pain the support from hamstring muscles is not adequate to perform knee flexion appropriately. The muscle force generation in thigh muscles is consistent while the hamstring muscles are unable to provide enough support to the knee. In addition, the hamstring muscles contraction fluctuate more frequently in knee pathology group than healthy population. This implies that, senior citizens who are suffering from knee pain, do not get enough support during transition from standing to prostration position while performing Salat appropriately. Taking this into consideration, proper rehabilitation method/tool can be developed. The findings of the study may contribute to design and to develop new rehabilitation tool for the Muslim population suffering from the knee pain but wish to perform Salat in appropriate manner.

[10] F. Ibrahim and S. A. Ahmad, “Investigation of electromyographic activity during Salat and stretching exercise,” in IEEE-EMBS Conference on Biomedical Engineering and Sciences, IECBES 2012, 2012, no. 66, pp. 335–338.