When a beam of light travels through particles which are smaller than its wavelength, it is possible these particles scatter the light beam in a process known as Rayleigh scattering. This process is visible everyday whenever sunlight is scattered by the Earth’s atmosphere. As sunlight is composed of different visible wavelengths of light – mainly Red, Orange, Yellow, Green, Blue, Indigo and Violet; ROYGBIV – not all sunlight has the same probability of being scattered.

When the Sun is directly overhead, all the wavelengths of light originating from it travel the same distance from the Sun and through our atmosphere and are scattered by the same medium (nitrogen and oxygen molecules). Hence, I0, R, θ, n and d remain constant and the above equation can be simplified into:

Hence, as GBIV light (400nm to 500nm) have shorter wavelengths compared to ROY light (570nm to 700nm), GBIV light is more intensely visible to us.

Due to the shorter wavelengths of GBIV light, they also have higher chances of encountering atmospheric molecules than the ROY light and getting scattered by it, as shown in the figure below. 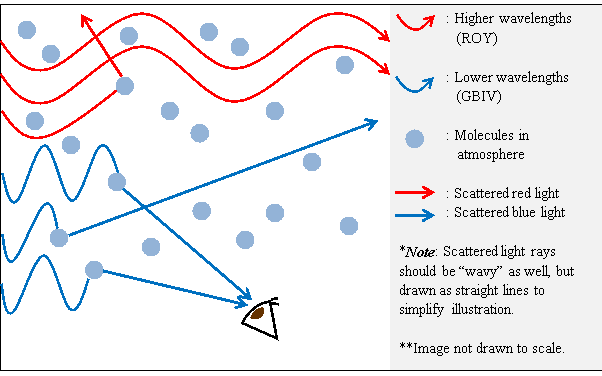 Although scattered light continues travelling in a random direction, a greater proportion of GBIV than ROY light reaches our eyes because GBIV wavelengths are shorter and more easily scattered. However, as our eyes detect the blue component in GBIV light that has been scattered the easiest (Leong, 2006), we see the mid-day sky as blue in colour.

At sunrise and sunset, sunlight has to travel through a longer distance through the atmosphere than at mid-day before it is visible. As a result, sunlight encounters more atmospheric molecules during these times which results in more scattering of light. Hence, with this increased distance, even the higher wavelengths (ROY) are scattered, and this colours the sky reddish-orange.

However, it is only at the horizons that the sky looks reddish-orange because the multiple rays of sunlight travel through different distances in the atmosphere due to refraction.

As seen in the figure above, sunlight ray A penetrates the atmosphere very minimally and experiences very little refraction. As a result, it travels the shortest distance through the atmosphere and gets very little scattering. Thus, only the violet and indigo wavelengths are scattered.

Sunlight ray B enters more deeply into atmosphere than A and gets refracted more. Hence, it has to travel a longer distance through the atmosphere which scatters most of BIV wavelengths. Before it leaves the atmosphere, however, the remaining wavelengths are scattered which results in a portion of the sky looking yellow.

Sunlight ray C penetrates deepest into the atmosphere and experiences the most refraction. As it travels the longest distance of the three rays, its higher red and orange wavelengths are also scattered. This gives a portion of the sky its reddish-orange colour.

Hence, this is why only the horizons are coloured reddish-orange while the rest of the sky remains blue during sunrise and sunset.

Sunlight reflected off the moon undergoes Rayleigh scattering as well, although its effects are not as visible. As mentioned earlier, the intensity of the light source (I0) and the distance of the light source from the particle (R) also affects the how intensely visible the scattered light is. 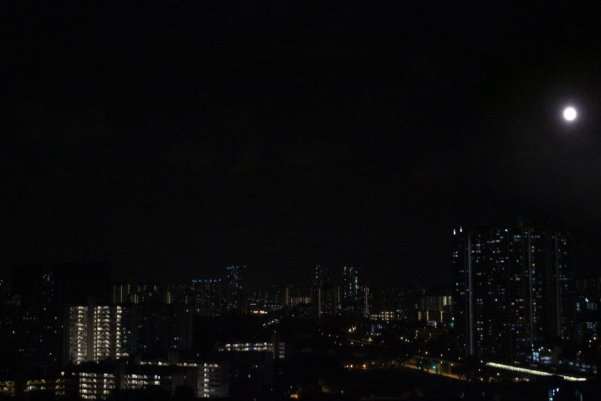 Although the Moon is much closer to the Earth than the Sun, the light we get from it is much less intense than that from the Sun, thus reducing the intensity of scattered light.

Aside from Rayleigh scattering, another type of scattering, in the form of Mie scattering, exists. This occurs when sunlight encounters molecules which are comparable in size to its composite wavelengths. As a result, all visible wavelengths in sunlight are almost scattered equally. 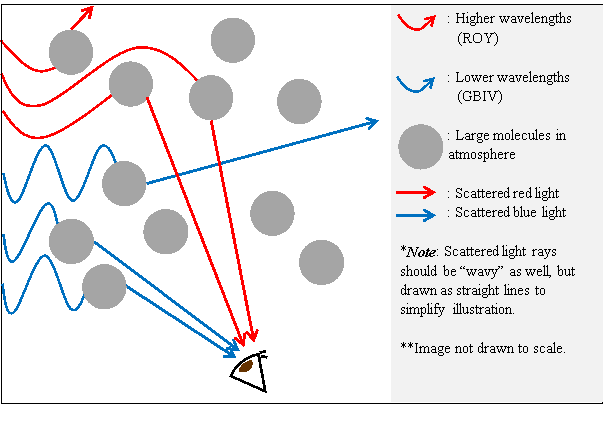 On a daily basis, Mie scattering is observable when we look at clouds. As water vapour in clouds tend to be 20 micrometres in diameter (University of Illinois, 2010), all visible wavelengths in sunlight are scattered by clouds equally, thus giving clouds their white appearance. 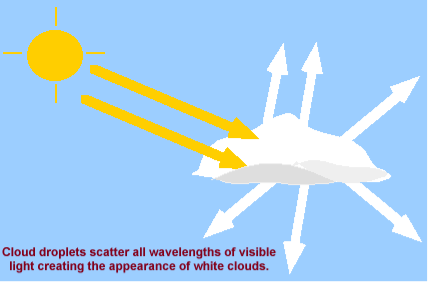 Bigger clouds or rain clouds usually look darker because they are bigger and contain more water vapour molecules. Thus, as these clouds scatter most of the sunlight that pass through them, very little sunlight exits through the bottoms of these clouds. 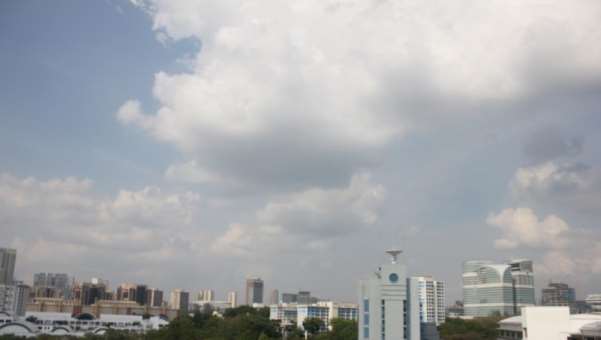 Besides appearing white or grey, clouds can also appear reddish at sunrise or sunset. This is attributed to both Mie and Rayleigh scattering. 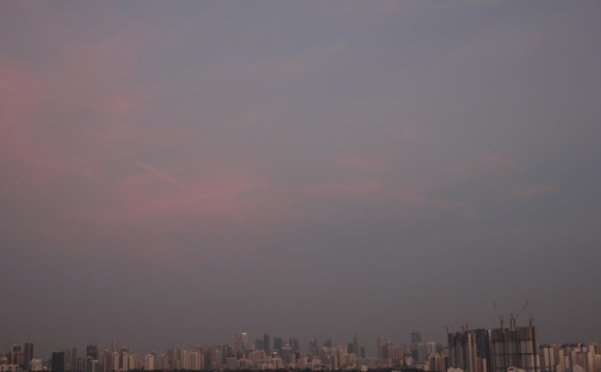 Mie scattering is also observable on nights when moonlight is scattered by clouds in the sky and results in clouds appearing white.

On certain late nights, it is also possible to observe red clouds in the sky even when there is no source of light in the atmosphere. This phenomenon is a result of denser clouds scattering light from the city back down onto Earth. As Singapore is mostly lit up by yellow or orange light from streetlights, a greater proportion of longer wavelengths are scattered by the clouds thus making the clouds look red.

However, if the clouds do not contain enough water vapour molecules and hence, are not large or dense enough, less city light is scattered. Thus, the redness visible in these clouds is not as pronounced and this is why red clouds are not always visible at night.

Consequently, the shorter wavelengths of light scattered through Rayleigh scattering, together with the light scattered by clouds, increase the ambient brightness of Singapore’s night sky and inadvertently blocks out dimmer interstellar light that would otherwise be visible. Thus, this is why it is quite difficult to see deep-space objects in most of Singapore with the naked-eye.

When dust and smoke particles from haze are present in the atmosphere, it becomes denser and causes light to undergo both Rayleigh and Mie scattering. This is because these particles typically range from 2.5 micrometres to 10 micrometres in diameter (Association of South East Asian Nations, 2014) and hence, are larger than visible light wavelengths.

Thus, when the PSI is in the moderate range or worse, it is possible to see that all light appears muted and dull. 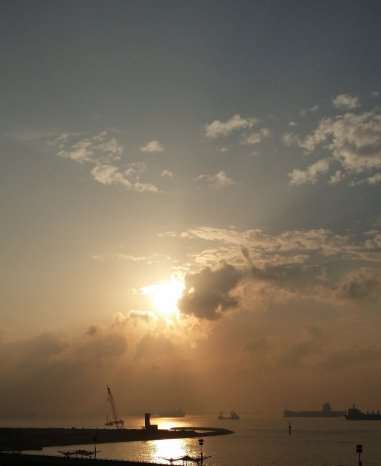 At night, haze also causes Mie scattering of city light not only in clouds but throughout the sky. This results in significant portions night sky taking on a reddish glow. 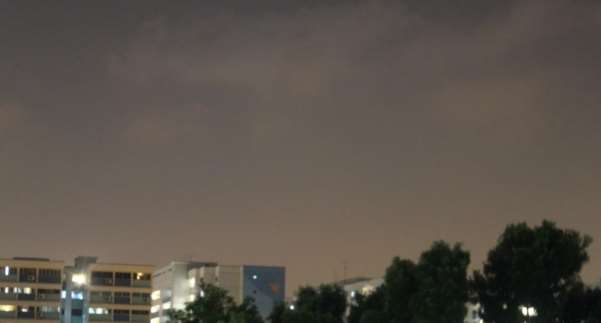 Through this project, I now have a better understanding of why the sky and clouds appear to change in colour over time as well as why it is relatively difficult to observe the cosmos in a brightly lit city at night. The latter was evident when our group spent a day at Changi beach to photograph the colours changes in the sky. Just as we were leaving the seaside after twilight, we noticed that were more stars were visible in the night sky than what can normally be seen in the brighter urban areas of Singapore. Unfortunately, we did not have a good enough camera that was able to photograph the stars in the night sky then.

One of the interesting things I have learnt from this project is also why the sky looks red on hazy nights, even when there is no light from the Sun or Moon. This is primarily due to light pollution that is scattered back down to Earth by smoke and dust particles in the atmosphere. Similarly, denser clouds at night appear red due to light pollution being scattered back down by water vapour within them.

It is also because of light pollution that the adage “red sky at night, sailor’s delight” no longer holds true all the time, especially in cities that are brightly lit up at night. This is because the red sky at night might not be due to a high-pressure system in the west bringing calm weather, but due to manmade causes mentioned above (Teitel, 2012).

This manmade phenomenon also has an implication on our circadian rhythms that act as our natural body clocks. Brighter skies at night could confuse our brains into thinking that it is daytime (and not time to sleep), thus disrupting our sleeping patterns and leaving us feeling jet-lagged. In the near future, the night sky might become even brighter as gas-discharge lights are replaced by light-emitting diode (LED) lights, which emit a greater concentration of shorter wavelengths (Teitel, 2012). Our circadian rhythms might be even more negatively affected by this increase in blue light, as they are especially sensitive to shorter wavelengths. A potential solution to mitigate this problem is to use warm white lights that emit minimal blue wavelengths.

Additionally, understanding how light is affected by minute particles has also allowed humankind to apply these principles in real-life, such as in optical fibres.

In optical fibres, light is used to transmit signals through cables made of transparent silica fibres. Since the silica molecules in these fibres are much smaller than the wavelength of visible light (Yao, 2010), Rayleigh scattering occurs within these cables and causes light to be scattered in a random direction instead of travelling through the cable. This is detrimental to signal strength.

Hence, as Rayleigh scattering is extremely dependant on a light’s wavelength and short wavelengths of light scatter the most, optical fibres usually transmit signals in longer light wavelengths to minimise scattering.

One of the most observable phenomena by the naked eye, the sky is often photographed at sunrise or sunset for its picturesque clouds. Besides just appreciating the beauty of these occurrences, I now understand the science behind them as well. Additionally, I also now know why the sky or clouds are red on certain nights even when there is no light from the Sun or the Moon.

Besides the theoretical principles and atmospheric observations, scattering of light also has practical applications in real-life. In times before satellite imaging existed to forecast weather, people referred to colours in the night sky to determine if there would be good weather the next day. Today, knowledge of light scattering is also useful in deciding what wavelengths of light should be used when transmitting signals through optical fibres.

In addition, understanding Rayleigh and Mie scattering also allows us to minimise to impact that bright skies might have on our natural body clocks.

Thus, the study of light scattering not only allows us to better appreciate our atmosphere, but also apply these concepts in real-life.