Electrocardiography is the recording of the electrical of the heart by a non-invasive procedure. This is possible because the body is an electrical conductor, the ECG machine acts as a voltmeter and voltage time characteristics are measured by attaching electrodes to the patient`s skin. 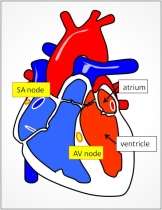 The ECG machine detects and amplifies electrical impulses (waves of depolarisation) initiated by the SAN. Each of the heart muscle cells in the body have a negative charge (at rest); this is called the membrane potential. The muscle cells have a negative charge because an active transport mechanism in the cell membrane maintains an excess of cations on the outside, and an excess of anions inside. This means there is a potential difference across the membrane. In the heart it is typically about 70 mV for atrial cells and 90 mV for ventricular cells. Decreasing the negative charge towards zero, via the flooding of cations (Na+ and Ca2+) into the cell, is called ‘depolarisation’ which ultimately causes the cell to contract. 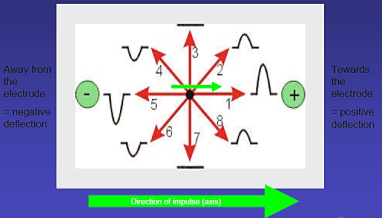 A healthy heart will have a distinctive wave of depolarisation that is: initiated by the SAN, spreads out through the atria, reaches the atrioventricular node and spreads all over the ventricles. The potential difference due to the heart`s electrical activity is measured by two electrodes (one positive and one negative). If the electrical impulse travels towards the positive electrode the result is a positive deflection. If the impulse travels way from the positive electrode the result is a negative deflection.

Electrodes are typically placed on the arms, left leg and one or more over the heart. This helps to minimise signals from other muscle cells in the body. This can help a cardiologist to understand what is happening in different parts of the heart. 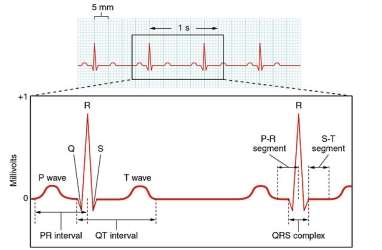 The electrical impulses are translated into a waveform. The resulting ECG trace has a distinctive shape with sections that are labelled P, Q, R, S and T. Abnormalities in the shape of the wave are used to identify heart problems such as irregular contractions of the heart. The heart has a zero potential difference across it, the contraction of the atria produces a P wave (The PQ interval represents the delay to allow the ventricles to fill). The contraction of the ventricles then produces the QRS complex. Finally the T wave shows the relaxation of the ventricles. The period (R-R interval) is the time between adjacent peaks in the ECG trace. In a healthy person this varies by up to 10% between each heart beat. Heart rate is determined by averaging over multiple heart beats (Heart rate = 1/average period). The heart rate in beats per minute is equal to the frequency in hertz (Hz) x 60.

The Physics of the Artificial Heart 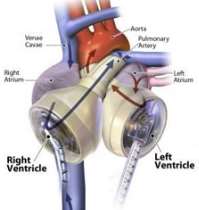 In artificial hearts (such as the one made by AbioCor), the electronic kit is implanted in the abdomen of the person receiving the transplant to monitor and regulate the pumping of the artificial electronic heart.

Power is supplied from an external battery pack to components inside the patient, without penetrating the skin, using inductive electromagnetic coupling. A principal similar to this is used by transformers in the national grid. The internal battery can provide up to 40 minutes of power when disconnected from the external battery pack, for when the patient may want to have a shower for example. 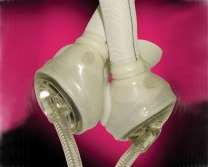 In transformers, an electrical current passes through a wire wound around a core, called the primary coil. Another wire is wound around the same core, this is called the secondary coil. If the two coils have the same number of turns around the core, it allows the primary coil to pass an exact copy of its electrical current to the secondary coil. These types of transformers are normally called ‘isolation transformers’. This allow two circuits to be electrically coupled, without the two circuits actually coming into direct physical contact. The image on the left shows a typical isolation transformer but the one used in this case is considerably smaller in size.

The patient is constantly moving so it is quite difficult to keep the two coils aligned. This 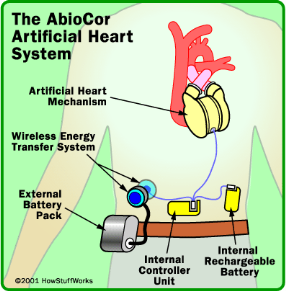 is important because the correct level of energy needs to be transferred via the wireless energy transfer system so that there is no excess transferred as heat to the surrounding tissue of the patient`s body; this could cause serious damage. Also the components need to be small enough to be carried around without too much discomfort.

Furthermore, the artificial heart needs to be able to monitor the flow of blood to maintain its pumping action and make sure the correct amount of blood is being pumped. The rate of the pumping of the blood needs to be altered when the patient requires more or less oxygen, for example more oxygen is required during higher rates of respiration. Blood-flow monitors make use of ultrasound; ultrasound is used because the flow of blood can be monitored without having to be in contact with it. High-frequency sound waves are reflected off red blood cells coming out of the heart. The volume and speed of the blood can be measured using similar principles to those behind radar. The movement of these red blood cells, either towards or away from the transmitted waves, results in a frequency shift (due to the Doppler Effect) that can be measured. This data can help the system to determine the speed and direction of blood flow in the heart.