Nano-diamond as a new article that there’s carbon in families of many of the behaviors and properties of carbon and other members of the family, the impact of the application of this article accepts it without knowing so, and understand it without understanding the carbon carbon and other members of the family is not possible. Nano-diamond in addition to diamonds, diamond properties such as hardness, resistance to different environments and The small size and a shell with active groups that it has different properties to conventional diamonds. On the one hand the diverse applications of properties and provide new and on the other hand, production and working with this article difficult. Of course, the proper use of diamond in different applications when possible, which is a non-diamond carbon and other impurities as possible are separated from it in addition any application requires special surface properties as well. The amount of impurities in synthetic diamond production depends on the extreme ways.

We used 241Am-Be 100 µCi, BF3 and LiI detector in the present study. Two materials have been coated. The experimental and simulated results have good agreement with consideration of errors. The results show that fast neutrons reflection could be carried out by nano-diamond powder better than graphite.

Neutrons shielding is based on the fast neutrons reflection as prompt and delay gamma are produced by neutron capture [1]. The scattering cross section of hydrogen is high for neutrons. So, hydrogen containing material such as polyethylene and hydrocarbon are used for neutron shielding [1]. Diamond has cubic lattice structure [2]. In this structure, one carbon atom is surrounded by four atom of carbon with covalent bonds. Very strong covalent bond of a carbon adjacent atom is caused by increasing of elastic modulus and ultra-high temperature stability [2]. Therefore, they make the strongest natural material. The structure of bulk material is 3D. But, the structure of nanomaterial is 2D (thin film), 1D (nanorod and nanotube) and zero dimensions (nanoparticle and nanocrystal). In addition to change properties of material, this technology increases the surface to volume ratio. Therefore, the ratio of surface reaction increases on the material.

By development of nuclear technology over the past 40 years, rules and standards of the IAEA have become more difficult and smaller for absorbed dose of personalities and environments in different conditions. There have been many limitations for neutron shield construction such as mass and volume of the shield [3].

Reflectors are used in reactors to prevent neutrons escaping. The best reflector has small absorption cross section and large scattering cross section. Graphite and beryllium (according to solid phase) are usually used for reflection of neutrons. Actually, the size of structural units (a) must be comparable to the wavelength of neutrons (λ). Coherent and efficient scattering of neutrons is proportional to the ratio of λ/a. A neutron can be described by wavelength, λ and wave vector

. The neutron energy is equal to

are thickness of material, number of atoms in unit volume and total cross section respectively [1,4].

BF3 detector is used for detection of thermal neutron. It works on proportional region. The isotope of 10B is used in the BF3 gas detector. The absorption cross section of 10B is large for absorbing of thermal neutrons. The BF3 counter detects the alpha and the lithium particles produced by the reaction [4,6,5]:

The efficiency of BF3 detector is proportional to absorption cross section of 10B and it changes for neutrons with different energies.

In addition of BF3 detector, LiI detector has been used for detection of neutron. 6LiI is an inorganic scintillator. Neutron detection by 6Li is based on the reaction

The Nano-diamond powder production was carried out by blasting method which could lead to the Carbon dioxide, carbon monoxide, nitrogen, nitrogen monoxide and etc. creation. The tiny particles of diamond are formed along with some solid impurities mixed with gases in the blast chamber. Table 1 shows the chemical analysis of ash samples. The results recorded in the table indicate the chemical analysis of ash residue from the combustion of the samples by wet chemical methods which are XRD, ICP.

Table 1: The chemical analysis of ash samples are presented

In the nano-diamond powder manufacturing process through blasting, diamond particles are formed at pressures higher than 200 kilo bars. At temperatures above 1000 ° C, the low pressure converted particles into graphite.

Methods of separation and purification of gas and liquid nano- diamonds are divided into two groups that raise the cost of investment. After all purification of the resulting material is carried out as the carbonic compound still has many types and amounts of impurities such as O, N, H, a small amount of metal and carbondioxide. Nano- diamond is then purified and turned ashen while the ash explosion leads to a large amount of black and dark -graphite production. Powder used in these experiments was purified by liquid method. In this method, different oxidizing agents such as acids, mixed acids, bases and salts are used. All these methods are only carried out in laboratory scale.

Characteristics of nano-diamond powder used are shown in Table 2.

Table 2: The properties of the used nano-diamond powder in experiments 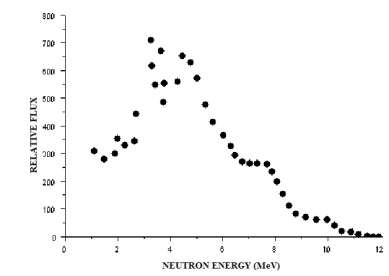 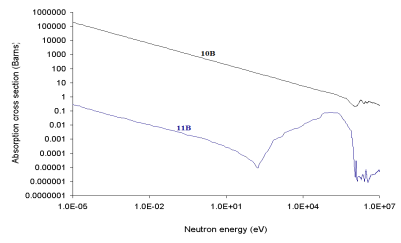 Figure 2: Variation of neutron cross section of 10B and 11B isotopes

The experimental setups have been sketched in figure 3 and 4 for investigation of graphite and nano-diamond layers effect on reflection of fast neutrons. 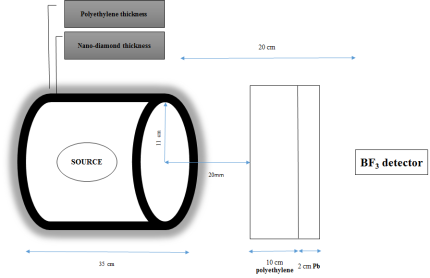 Figure 3: The experimental setup for investigation of graphite and nano-diamond layers effect on reflection of fast neutrons 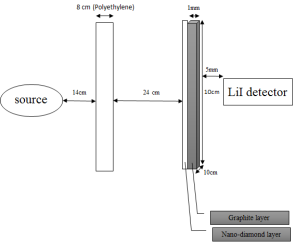 Figure 4: The experimental setup for investigation of graphite and nano-diamond layers effect on shielding of fast neutrons

In the present study of neutron reflection, the height and radial of the cylinder are 35 cm and 11 cm respectively with one side open and the other closed. The neutron source is in center of the cylinder and the detector is placed in front of the open side. The cylinder is made of polyethylene with 2 mm thickness. Graphite and nano-diamond are coated with polyethylene in cylinder. The distance of the detector lateral surface and the open side of the cylinder was 20 cm. The thicknesses of coated graphite and nano-diamond were 1, 3, 5, 10, 15, 20, 25 and 30 mm.

The background neutrons are originated from walls, floor and other instrument in the around environment. A polyethylene cube with 10 cm thickness and a lead block with 2 cm thickness are located between source and detector for absorption of emitted gamma rays and neutrons from source. This geometry detects gamma rays background and neutrons. This work repeats for each measurement with and without absorbers. The first and second counts are foreground and background respectively. If background subtracts from foreground count, the result will be net count of reflected neutrons from cylinder to detector.

As mentioned above, the thicknesses of graphite and nano-diamond were 1, 3, 5, 10, 15, 20, 25 and 30 mm respectively. In each measurement, the same thicknesses were compared at a margin oferrorequal to ±23 percent. The errors come from neutron source and count measurement as the error of neutron source was ±15 percent and the count measurement (N) one was N1/2.The neutron counts in different thicknesses of graphite and nano-diamond are shown in figure 5 and 6. 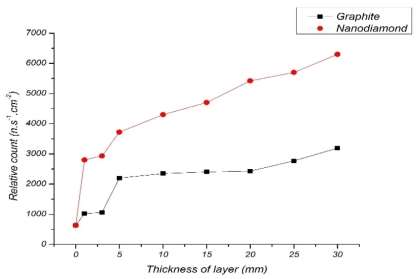 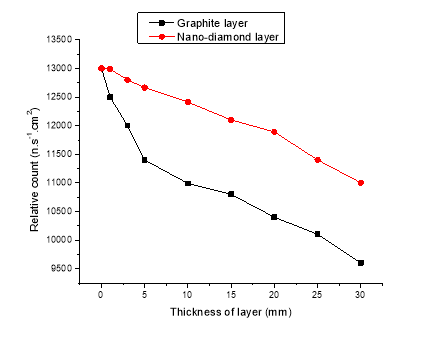 All the system parts have been simulated by Monte-Carlo method. We have used MCNPX2.6 to calculate the absorbed dose. MCNPX2.6 is a general purpose of Monte Carlo radiation transport code designed to track many particle types over broad ranges of energies. Form of molecule, bond and density are changed in a nano chemical composition. Coulomb force determines the form of molecules. The total charge of the neutron is zero. Therefore, there is no effect on neutron cross section with matter of nano scale. Also, the neutron reaction is nuclear and it is independent of charge or electron cloud so that it can be simulated by MCNP code. Therefore, it is not important to consider the nano-scale of the nano-diamond. However, nano-scale affects density and it must be noted in Monte-Carlo input. The neutron flux has been calculated in the sensitive volume of BF3 and LiI detectors with different thicknesses of graphite and nano-diamond. The results are shown in figure 7 and 8. 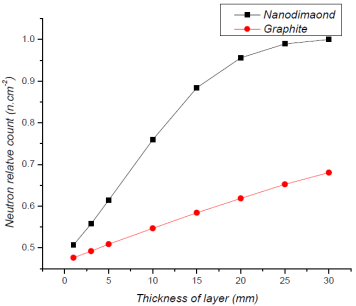 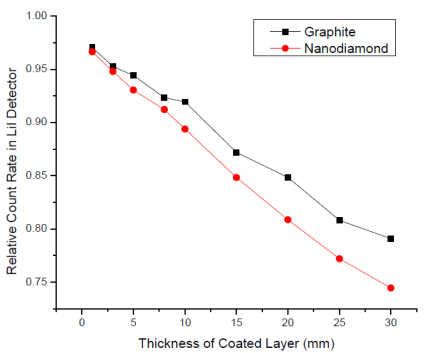 Because of hydrogen presence in the nano-diamond composition, it can reflect neutrons better than graphite. The neutrons counting is increased by graphite and nano-diamond thickness enhancement. However, determining thenumberofneutrons is faster for nano-diamond layer. Fig. 4 and fig. 6 show that the reflected neutrons are increased by thickness enhancement. The differences arise from the measurement method as the measurements are done by BF3 detector which measures thermal neutrons. The simulated results are considered the all of neutrons.

Also, Fig. 7 and 8 show that nano-diamond has a more shielding effect in comparison with graphite because the net count rate becomes smaller by using nano-diamond shielding. The differences are because of the measurements done by BF3 detector and the simulation results are considered as the spectrum of neutrons.

Two main factors effecting on neutron reflection are cross section and density. Nano-diamond (C10H16) contains hydrogen and it has larger cross section interaction in comparison with graphite. In addition, the density of nano-diamond and graphite are 3.5 and 1.8 g/cm3 respectively. According to the results, true count of nano-diamond reflector is 2 times of graphite reflector. The simulated and experimental results have good agreement by consideration of errors. Also, the number of low energy neutrons in nano-diamond reflector is larger than in graphite one. Therefore, conventional material can be put aside and nano-diamond is used for neutron shielding.