How does Magnetic Resonance imaging work and how can it influence the future?

An Introduction to Magnetic Resonance Imaging[1][2][3]:

Magnetic resonance imaging (MRI) is used as an accurate form of disease detection which is usually used to confirm a patients condition, as well as a method of looking at trauma to the brain, examples of which could be bleeding and swelling. Alongside these uses MRI can be used to look at the soft tissues, as well as information on the structure of joints.

Prior to the introduction, the only method for diagnosis for many of these problems were invasive methods such as surgery, and x-rays or CT-scans which were less accurate and ionizing, which could have a lasting effect upon the body. The use of MRI scans is only a recent phenomenon, with the first image on a person being produced as late as 1977, by Paul Lauterbur and Sir Peter Mansfield who received a shared Nobel prize for their work on this matter. Both scientists were looking at how nuclear magnetic resonance imaging could be used to look at solids and liquids, and both formed the theory behind it all, but it was Sir Peter Mansfield who developed the method used in MRI by firstly solving how to define a slice of a matter, and also how to produce images from multiple-pulse experiments. Although the work on producing images for biological specimens only came about as a result of the fact that it would be too hard to produce images of a solid.

How does Magnetic Resonance Imaging work[4][5]?

Magnetic resonance imaging involves a series of steps which are all explained below, in order to produce the final image that is used for diagnostics.

The body’s mass is approximately 10% hydrogen, of which 70% is contained in water, and due to the fact that protons produce a large signal to a MRI scanner a more accurate image is produced, as they are in such large abundance in the body in the water.

The hydrogen nuclei in the body spin about an axis, this is illustrated in figure 1.1. As a result of the spinning protons being charged, the spinning of a nuclei along an axis causes a small circulating electric current, which in turn causes a small magnetic field.

If a collection of these nuclei were to be placed in a stronger external magnetic field (BØ), most of the nuclei will align their spin in the same direction as the external field.

As you can see from figure 1.2 not all of the hydrogen nuclei are aligned with the direction of the magnetic field, and this is because both alignments are possible, but the one with the field is a lower energy state, whilst the protons against the field are at a higher energy state. The protons are continually oscillating back and forth between the two states, because there is a tendency for nuclei in a high energy state to return to a lower energy state by emitting some of its energy to surrounding nuclei. There is usually enough thermal energy in the material for the nuclei to be flipped back.

How do protons precess about an axis?[6] 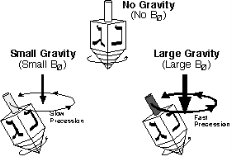 Why is the Larmor frequency is of that form?

Where Υ is a constant called the gyromagnetic frequency, which varies for each type of particle, but in the case of MRI is a constant as you are only affecting hydrogen nuclei. As the external magnetic field would be uniform and constant, to work out the Larmor frequency you need to divde the Larmor precession by 2πf.

The precession of the nuclei only has a small effect upon the total magnetic field, which is only a small increase in magnetic field along the external field axis.

Why do we need superconducting magnets to make the protons resonate?

Superconducting magnets are used in magnetic resonance imaging of the human body because magnetic resonance imaging requires extremely uniform fields across the subject and extreme stability over time. By having the magnet coils in the superconducting state helps to achieve parts-per-million spacial uniformity over a space large enough to hold a person, and parts per million hour-1 stability with time. This is the reason for using superconducting magnets alongside the fact that they are able to produce a magnetic field of a magnituted of 1 or 2 Teslas.

How to make the protons resonate?

These three stages are all depend upon the nuclei precessing in phase with each other, this is done by making them absorb radio-frequency radiation of the same frequency of the Larmor frequency. The absorbtion of the energy causes low-energy state protons to flip into the high-energy state, which means that the protons are anti-parallel to the external field lines and also precessing in phase with the applied signal, which in turn mean that they are in phase with each other. The number of protons that flip depends upon the duration of the radio frequency pulse, which is applied.

How a magnetic resonance image is produced: 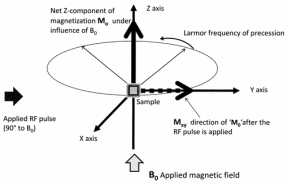 In order for a magnetic resonance image to be produced, you need to be able to locate the part of the body that has an ailment, in order to do this three smaller non uniform magnetic fields are added to the constant field. If you look at figure 1.5 you are able to see how these magnetic fields are applied, with one running the length of the patient’s body, this is the z-axis and this is used to define slices through the body. The body in this diagram is the sample, with the other magnetic fields being applied in the x-axis and y-axis, within the plane of a slice.

The magnetic field strength at any point is the sum of the four fields that sets a unique larmour frequency and phase at each point in the body. 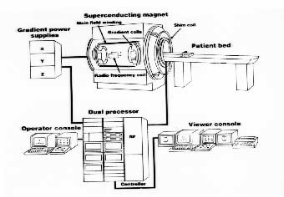 To actually produce an image a pulse of electromagnetic radiation is sent through the body at a set radio frequency. The protons with a Larmor frequency will absorb energy from the pulse and flip into the higher energy state. As a result a transverse field, which is rotating at the Larmor frequency, is produced for the specific part of the body. As a result of Flemings Left hand rule, the rotating magnetic field that is actually an alternating field induces an electric current in the detector. The image is gradually formed by sending a sequence of radio-frequency pulses through the body at different frequencies to pick out the Larmor frequencies at different locations. The signals produced and the relaxation time involved are processed by computer to assemble the image.

How is a clear image is produced on the scan?

MRI is regarded as one of the safest ways of confirming a diagnosis, although there are some exceptions where a patient has form of metal in their body, which interferes with the powerful superconducting magnets, which allows a magnetic resonance image to be produced. An example of something, which could cause a magnetic resonance image to not work, is tattoos that have metal fragments in the ink that is used to form the image. The metal is dangerous because metal objects can be forcefully drawn to the magnet; if these metal objects are embedded in your body, they can be drawn to the magnet and cause damage.The magnetic resonance image can also be dangerous for pregnant ladies.

Using magnetic resonance imaging to detect cancer in the body

A future use of MRI is to detect cancer; cancer cells need far more energy than most other types of tissues in the body, so a new technique has just been developed where a patient suspected of having cancer is injected with glucose. This results in a differing brightness on the image produced with the tumor appearing far brighter. Although this is currently only a concept that is still some way from being used on the general public, and this is in part due to the fact that the magnetic field strength used to produce these results is far higher than being used currently and we would need to see if the same results would be produced at a lower field strength.

In conclusion by taking the simple model already in place MRI has a bright future in diagnosis and detection of diseases, with MRI being the safest form of diagnosis for soft tissue as a result of its non-ionizing nature and clear results that it produces. The future for MRI will become brighter as the cost of using it falls over time, so that it will be more freely available and thus use for mass cancer detection could occur for example.

MRI has already had a major impact on practices undertaken by doctors in assessing a patients needs, and the use of MRI stands to continue these changes further as more uses are developed.

How does Magnetic Resonance imaging work?

The safety of MRI scanning

Using MRI to detect cancer in the body:

Are there any modern alternatives to this technology?