Piping networks have quite a wide range of practical applications, from water and gas distribution systems to air conditioning installations. Although simple problems, such as for instance, a single branch connecting two reservoirs, may be solved analytically, more complex network problems need an iterative approach, recurring to a digital computer. The most popular method for solving this type of problems is the Hardy-Cross method. The Hardy Cross method is an iterative method for determining the flow in pipe network systems where the input and output flows are known, but the flow inside the network is unknown. Also, the pipe length, diameter, roughness and other key characteristics should be known. Before the method was introduced, solving complex pipe systems for distribution was extremely difficult due to the nonlinear relationship between head loss and flow.

This method is applicable to closed-loop pipe networks. The outflows from the system are assumed to occur at the nodes, where a node is the end of each pipe. This assumption would therefore result uniform flow in the pipelines distribution systems.

The Hardy-Cross analysis is based on the principles that

For a given pipe system, with known junction outflows, the Hardy-Cross method is an iterative procedure based on initially estimated flows in pipes. Estimated pipe flows are corrected with iteration until head losses in the clockwise direction and in the anticlockwise direction are equal within each loop.

Distribution system is a network of pipelines that distribute water to the consumers. They are designed to adequately satisfy the water requirement for a combination of domestic, commercial, industrial and fire fighting purposes.

In any pipe network, the algebraic sum of pressure drops around a closed loop must be zero (there can be no discontinuity in pressure) as well as the flow entering a junction must be equal to the flow leaving that junction; i.e. the law of continuity must be satisfied (Nptel.ac.in, 2014).

A good distribution system should provide adequate water pressure at the consumer’s taps for a specific rate of flow. The pressures should not only be great enough to adequately meet fire fighting needs, but should also not be excessive due to pressure leakages which is cost-effective. However, in tall buildings, booster pumps are required to elevate the water to upper floors. Moreover, distribution system of purified water should be completely water-tight and the purity of distributed water should be maintained. Maintenance of the distribution system should be easy and economical. Even, during breakdown periods of pipeline, water should remain available. If a particular pipe length is under repair and has been shut down, the water to the population living in the down-stream side of this pipeline should be available from other pipeline. The distribution pipes systems should not be placed under highways, carriage ways as they will obstruct any traffic flow, but should be laid under foot paths. 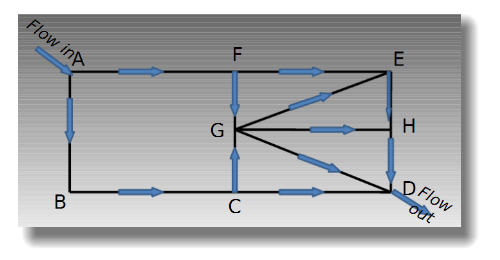