What affect does the potential difference (V) across the circuit has on the copper coating on an iron metal?

The above equation states that as the current increases, the electron flow will also increase. Thus increasing the potential difference across the circuit which in turn increases the copper coating on iron metal.

Diagram of the experiment: –

How to control the Control Variables: –

After taking down the readings and noting the associated qualitative data, the raw data table is now processed and the data is represented graphically so that a better analysis could be done.

The processed Data table consists of two tables showing the change in mass after the data is obtained. A graphical representation of the data is also done.

Change in Mass was calculated by subtracting the initial mass from the final mass,

Similarly, Change in Mass was calculated for different Potential difference shown in the table.

Similarly for this table, 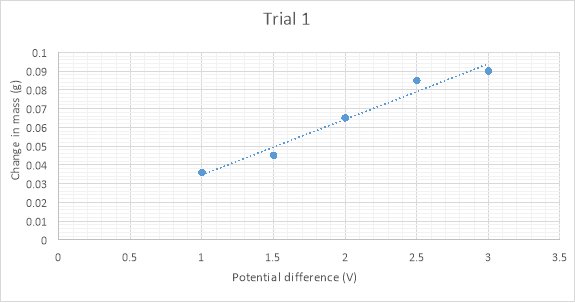 The above graph shows the relationship between Change in mass and Potential Difference. The obtained graph resembles a linear graph and the error bars are plotted. A trend line is also made to pass through all obtained values.

Similarly, graph for trial 2 is shown below, 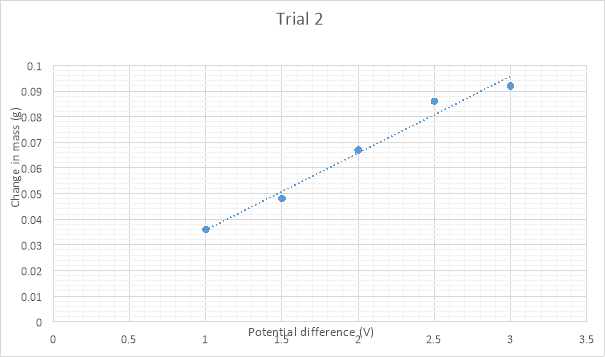 Further Calculations are done to find the exact difference between both the trials,

Finding the slope of the above graph,

The slop obtained from differentiating the equation states that when 1V is increased, 0.0296 of Copper deposition takes place. This cycle continues for 1V increase.

Calculating the moles of Copper,

In Copper Sulphate, a +2 charge is present on Copper hence the required electrons will be as follows,

Calculating the transfer of charge,

Increase in the current =

By differentiating the above equation,

Calculating the moles of Copper,

Calculating the transfer of Charge,

The Charge transfer obtained is 89.60 C

Uncertainty of the experiment cannot be found out because the slope of both the graphs are different.

From the graph, it is seen that,

The major reason for this deviation from the trend line plotted in the graph indicates that the resistance was not controlled properly. The graph is plotted on the basis of the Ohm’s Law stating

, when the Resistance ‘R’ is constant but in this experiment, both trial one and trial 2 have different value for Charge transfer thus it can be concluded that the experiment was not accurate because of the presence of fluctuating Resistance.

Errors that may have occurred

How to improve the experiment