Cars today play a vital role in our lives. They bring ease and satisfaction to our lives, because these vehicles help us transport from one place to another without exerting so much effort on it. Wherever you desire to go cars are the fast and easiest solution for your problems.

Plus it’s mostly used in our daily activities, transportation from home to school safely, going on road trips; since you will not be able to walk carrying your luggage easily, etcetera… In addition, it comes in handy during emergencies.

Moreover, cars are helpful when it comes to safety, but accidents sometimes occur. Scientists and mechanics are attempting to overcome accidents by trying to figure out the faults behind the car.

As explained in “Importance of Cars” article, submitted on June 25th, 2012.

There are plenty of reasons behind car accidents:

For example, in Ireland it is one of the biggest factors that contribute to road deaths. Excessive and inappropriate speed causes more than 40% of deadly collisions.

Excessive speed is when you cross the speed limit.

The table below explains how a small difference in the speed of the car could be the difference between the life and the death of a defenseless pedestrian.

The figure below sums up the stopping distance of the car in wet conditions.

While the other figure explains the stopping distance of the car in normal conditions.

“The pictures above are provided by Holroyd City Council Australia.”

Fog can be defined with “thick cloud of tiny drops of water in the air” according to Oxford Learner’s Pocket Dictionary. It makes driving perilous in these conditions, since it reduces visibility to around 400 metres.

First of all, the ones vision of speed is twisted. He might think that a vehicle is driving slower than it actually is, as a result to the lowered distinction. Furthermore, as this person will not be able to judge his own speed by taking a look at his surrounding, since he is enclosed by a foggy atmosphere.

Secondly, distance may be underestimated. Since people distinguish between far and nearby vehicles based on whether they are blurry or not. As a distant object or vehicle might appear blurry, and the driver’s mind will interpret that the object is actually far. Therefore accidents are more likely to take place.

If a person diverts his attention away from the road it can cause an accident. Whether that person is adjusting the stereo, using his cell –phone, or even a distraction outside on the streets, it all might happen in a split of a second. 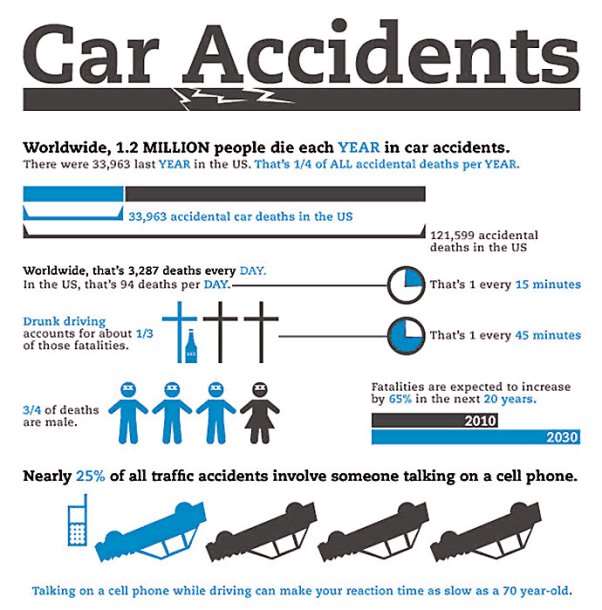 As explained in the picture above, using a mobile phone while driving will reduce the driver’s reaction time as slow as a 70 year old.

Driving under the influence of alcohol leads to accidents, because it’s like a tranquillizer and a powerful depressant drug, so it slows down brain functions. The brains ability of processing information is affected by alcohol. As it diminishes consciousness and sight

A drunk driver would find it hard to:

As reported by the Department of Transport. Furthermore, a person may take more risks than usual, and alcohol would slow down their nervous system, and some people may not react at all.

Here are some statistics:

“Every 53 minutes in America, someone is killed in a drunk driving crash. That equates to 27 people every day.” 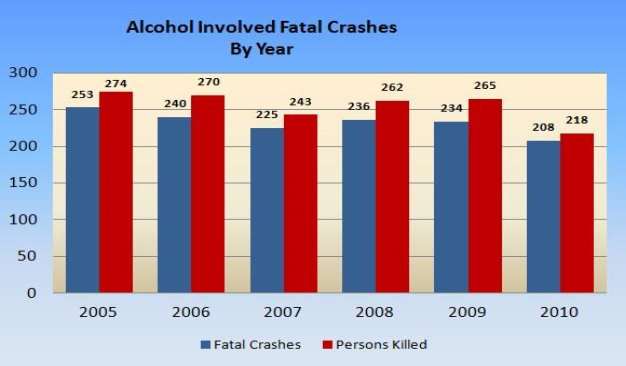 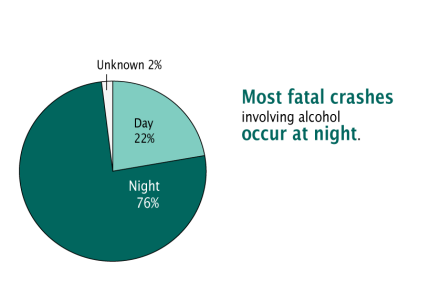 According to Sir Isaac Newton in his 1st law which is “if the resultant force is zero, then the object will

During the accident, forced are exerted on the car. But not directly to the passenger, since he will keep moving even when the car comes to a stop. They might even hit the steering wheel or go out through the window. The speed of the car before it crashes is sharply equal to the speed of the passenger when it hits anything inside the car. That’s why seatbelts are made; to slow the driver down. 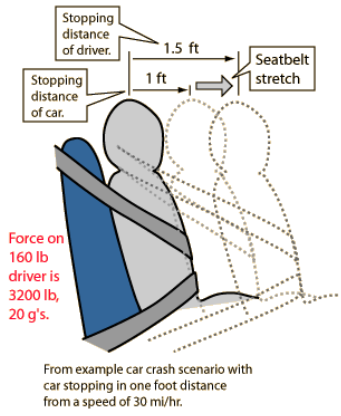 When the accident occurs the seatbelt diminishes the stopping distance. As explained in the diagram that’s on the left.

The total force exerted on the passenger’s body equals the mass of the vehicle times the vehicle’s acceleration. When seatbelts are used in the correct way, they lessen the external force of the accident and allocate the initial inertia of the collision across the body. Throughout crashes, seatbelts reduce a lot of force sensed by the passenger and lessen the severity of that person’s injury.

When the person’s head jolts forward during the vehicle crash, it will be protected by the airbags that inflate whenever the car crashes from certain aspects. So basically, its purpose is to help reduce the passenger’s speed when they collide with the interior vehicle without getting injured.

Each and every object in a car has mass, speed and direction (velocity). If a person is not secured inside a car he will continue moving in the same direction (forward, or depending on the crash itself), with the same speed as the car’s, and when the car comes to a stop, until a force is exerted on that person.

The airbag takes about 20 milliseconds to inflate, so the person can crash onto it.

The person has made contact with the airbag around 60 milliseconds, and then it begins to deflate. The deflation process take about 35-40 milliseconds.

Today, airbags can be found in different places in the vehicle. Such as the head airbags, steering wheel airbag, passenger airbag, and side airbags,

Even though airbags are found, the passenger still has to buckle his or her seatbelt, because it will decrease his injury.

Rule and Regulations In Canada