In this project I will discuss in details the applications of engineering materials in Engineering and its many application in the Aerospace and Formula 1. Materials are key in engineering because the correct materials are needed to meet the needed of the environment that they are meant for use in. In aerospace the materials that are generally used are thing such as: titanium, aluminium, carbon fibre. For example titanium and titanium alloys are used in aerospace engine combustion chamber which can be in the region of 2000C in some instances.

Application of materials in Formula 1

Formula 1 is a motor racing category in which the cars can reach extremely high straight line speed and cornering speeds. For them to be able to reach to be able to reach such high speeds and operate in such conditions, the cars much be built from extremely light and strong materials such as carbon fibre and titanium. Carbon-fiber-reinforced polymer is used extensively in high-end automobile racing .The high cost of carbon fiber is mitigated by the material’s unsurpassed strength-to-weight ratio, and low weight is essential for high-performance automobile racing. Race-car manufacturers have also developed methods to give carbon fiber pieces strength in a certain direction, making it strong in a load-bearing direction, but weak in directions where little or no load would be placed on the member.

Materials such as titanium are also used a lot throughout a formula one engine because of the fact that it is extremely strong and light which allows it the engine to operate at extreme engine speeds such as 20000RPM for a sustained period of time without resulting in engine failure. A material called Inconel is used in the construction of the cars exhaust pipe because of its ability to hold its shape and continue to work as in intended at high temperatures in the region of 900-1000 C . Quite often in formula the rule makers often dictate what materials are permissible in the construction in various parts of the car and what materials are forbidden. This often due to trying to stop the teams from using very expensive materials in the development of the cars, which would send spending sky high. Materials such as beryllium alloys where banned in the use of the construction of the engine as a cost cutting measure. When with the FIA, the regulators of the sport, top teams with big budgets quite easily end up spending in the region of £250 million a year on the development of the car.

The chassis of the car also knows as the monocoque because of how it’s constructed as one piece. The chassis of the car is also sometime referred to as the “survival cell” because it has been designed to cocoon the driver in the event of crash and protect them from injury. The chassis also has to be very light as well so that it is possible to reach highest possible acceleration which gives the teams a possible advantage over their rivals. Another reason for a strong chassis in grand prix racing is that the chassis is also used as mounting point for the engine and the gearbox. The reason this is done again to save as much weight as possible whilst maximizing the structural integrity of the car. The material that can do all then things is carbon fiber which was first used in formula 1 when a British engineer called John Barnard built the McLaren MP4-1 chassis from carbon fiber. The material should just how strong it when McLaren driver John Watson had a heavy crash at the Italian grand prix at the Monza circuit , and managed to get out without any major injuries. The car did go to win 6 grand Prix because it was significantly ahead of its rivals in terms of the materials used in its construction which gave it huge advantage over the rest of the field considering that this versatile and super strong was introduced in 1983.

The limitations of many of the materials is that that most of it is very expensive because of the nature of the materials which puts allot of strain on the smaller teams with smaller budgets especially since 60% of the car is constructed from carbon fibre. Carbon fibre is a recyclable material but the problem with it is that the more it is recycled the more of its structural integrity it losses, like plastic, and therefore the quality of it goes down significantly which means that it can only be used for things such as road paving fillers.

The metal parts of the car such as the cars such as the car’s engine and internal parts of the gearbox, such as the gear ratio, gear forks and the main shaft, can all be very easily recycled without the loss of the strength or quality of the material. Materials such as titanium and steel alloyed which are used for internal parts of the gearbox and also the engines major castings ( cylinder heads , crankshaft, engine block , camshafts) can be melted down and made back into gear ratio or many other things such as aerospace quality components which are found in aircraft fuselage or deep within the engines.

Material applications in the Aerospace Industry

Material research, development and application are absolutely vital in the aerospace industry because through the development of materials that planes are flying higher, faster and safer than ever before. Through the use of ultra light and ultra strong materials such as GLARE (Glass Laminate Aluminum Reinforced Epoxy). GLARE is a “Glass Laminate Aluminum Reinforced Epoxy” FML, composed of several very thin layers of metal (usually aluminum) interspersed with layers of glass-fiber “pre-peg“, bonded together with a matrix such as epoxy. The uni-directional pre-preg layers may be aligned in different directions to suit the predicted stress conditions.

Although GLARE is a composite material, [1] its material properties and fabrication are very similar to bulk aluminum metal sheets. It has far less in common with composite structures when it comes to design, manufacture, inspection or maintenance. GLARE parts are constructed and repaired using mostly conventional metal material techniques.

With the application of such materials in aerospace, it has allowed engineers to create bigger planes which are also very economical at the same time. the use of fatigue resistant materials such as GLARE and carbon fibre also reduce maintenance of aircraft because they don’t need to be checked for cracks as often as planes which are made from aluminium and aluminium alloys. Which are plane from aluminium are more prone to what is known as “metal fatigue”. Metal fatigue happens as a result of continuous loading from the years of pressurisation cycles that a plane goes when it increases and decreases in altitude.

Many aerospace companies such Rolls Royce have an in-house material science research department which spend millions of pounds in research with the hope that it will lead to better quality materials which will be able to function correctly in extreme environments such within the core of a high bypass turbo fan engine, where the temperatures can be in excess of 2000C. The materials are used for this are usually titanium alloys because of its ability to stay in its original shape. If you look closely at the picture of the turbine blade bellow , it can be observed that many small holes have been very precisely drilled in and this is to aid the cooling of the blade and stop in from melting and ultimately causing an entire engine failure. Another reason why such ultra light materials are used is because, the engineers want to minimize the mass of the components as much as possible because this reduces the inertia of the part and this will result in better response time from the engine ,when the pilots engine increase power to the engine. Lighter components also reduce the fuel consumption of and the engine which is especially important considering the fuel prices as they continue to rise. This is something that airlines will pay extra close attention to because they are always looking to minimize their cost to increase their profits, this is especially important at the moment give the current state of the global economy.

Materials in aerospace are also select for their ability to be able to absorb tremendous amounts of energy from unlikely event of an engine failure or an uncontrolled explosion of some sort. Aerospace engine manufacture such as Rolls Royce and General Electric also take the extra step of detonating a fan blade to see whether the engines fan case absorb and contain the impact and to stop parts of the engine escaping and causing further impact to the aircraft. Manufacturers often spend as much as $30 million on this test, at there on expense to prove to potential passengers and airline customers that the engine is truly safe and air worthy. 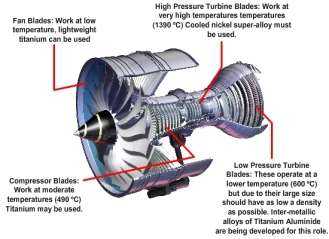 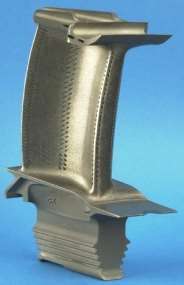