The experiment described in this report used a pressure distribution over a NACA 0012 airfoil to determine the lift and moment coefficient about the quarter-chord on that airfoil. Lift is one of the most important and governing forces acting on a body moving in a fluid. The calculation of lift and drag is at the forefront of aerodynamics as a whole. Furthermore, understanding an airfoil’s pitching moment is of the utmost importance with regards to an aircraft’s stability. The lift and moment were calculated from the integration of the measured pressure distribution over both the upper and lower surfaces. While calculating lift and moment, the pressure distribution characteristics were shown for different angles of attack. The tests were conducted in the 2 foot by 2 foot wind tunnel, capable of Reynolds number ranging from 32,000 to 950,000.

All aerodynamic forces and moments are generated by two main sources: pressure distribution and shear stress distribution. The experiment described in this report gives a way to determine the lift, drag and the moments (at least part of them) on a body from the pressure distribution. The pressure and shear are natures only two ways of communicating a force acting on a body [1].  The experiment does not deal with shear stress, so some of the drag, called skin friction drag should not accounted for. If all of the pressure and shear forces are summed up over the whole body, the resulting force and moment will be the total aerodynamic force and moment [1].

The lift generated by an aircraft’s wings is what allows the aircraft to overcome the effects of gravity. This makes determining the lift of airfoils of utmost priority to fit aircraft parameters and restrictions. The drag of an aircraft is the force that acts in the opposite direction of the free stream velocity. The drag is also important because with less drag means there will be less thrust required to achieve flight. This is very important because generating thrust is expensive, so by reducing drag the overall efficiency of the aircraft can be improved.

The experiment used a NACA 0012 airfoil shape, which is symmetric. It has 18 static pressure               ports along the upper surface of the airfoil and these ports recorded the pressure at several different angles of attack and Re. The pressures are ran through a pressure transducers and values are stored so they can be later used to determine the lift and moment of the airfoil.

The lift force on a body moving through a fluid is the force acting perpendicular to the free stream velocity. The drag force on a body is the force acting parallel to the free stream velocity. These two forces are due entirely to the pressure and shear stress distributions over the body [3]. If a coefficient of these forces is introduced, the calculation of these forces can be simplified when changing certain parameters. The coefficient of lift is described by

The coefficient of lift can also be described by

is a function. The moment about the quarter chord is derived by

However, regarding a symmetric airfoil,

Therefore, theoretically the moment coefficient about the quarter-chord should be equal to zero

the earlier formulas, can be given by

is independent of them [2].

The higher the Re, the more the inertial forces dominate the flow.

momentum [2,3]. Total pressure can then be described by the equation

where the dynamic pressure is the second term on the right hand side of the equation.

A NACA 0012 airfoil is symmetric. This means that the flow over the upper and lower surfaces are the exact same at a 0-degree angle of attack, and the flows of any magnitude angle of attack are mirrored over the chord line. In other words, if at some

the flow over the upper and lower surfaces have certain characteristics, then at

the flow will be a mirrored over the chord line. The pressure data can then be collected on one side at a positive and negative alpha in order the get the distribution over the upper and lower surfaces for each magnitude of

while only having pressure ports on one side.

As a general predication, it is hypothesized that as the Re goes up than lift will increase as well. Also, increasing the angle of attack will similarly induce an increase in lift. That is until the airfoil reaches a critical angle of attack, causing flow separation and an immediate loss of lift. Careful examination of the different Re and angle of attack combinations and which cause flow separation will be of utmost importance during this experiment. Regarding the moment about the quarter-chord, it is hypothesized that not much fluctuation in the moment coefficient will occur. Possibly some jumps may occur while the airfoil is tested under its most extreme angle of attack.

Description of Test Equipment and Procedure

The experiment setup is shown in Figures 1 and 2. A 2 ft. by 2 ft. open circuit wind tunnel was used to test the airfoil. A monometer inside the tunnel was used to test the dynamic pressure inside the tunnel. A NACA 0012 airfoil, with chord 6 inches and a 2 ft. span that spanned the entire width of the test section. Since the airfoil spanned the whole width of the test section, the flow could be modeled as a 2D flow. 18 pressure ports on the upper surface of the airfoil were used to measure the pressure distribution for angles of attack at 2, 4, 6, 8, 10, 12, and 14 degrees, each at 30, 60, and 90 feet per second. Additionally, a 16 degrees angle of attack was also measured only at 90 feet per second. Then the process was repeated for the negatives of these angles so as to have the flow from the lower surface in part one to be on the upper surface where the pressure ports were in part two. The location of the pressure ports is shown in Table 1. The ports were connected to a scanivalve system which has a built-in pressure transducer and utilizes a PC with a data acquisition card to record the pressure data shown in Figure 2. 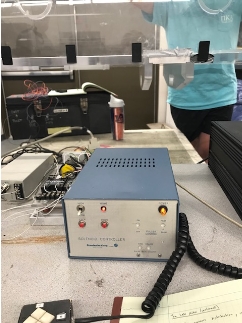 The atmospheric pressure in the experiment was 14.3172 psi, and the temperature was 72

. These were used to calculate the density and pressures inside the testing section and determine the velocity. Figure 7: Moment Coefficient about the Quarter-Chord vs. Angle of Attack

Even though the results of this experiment lined up relatively closely with theory, there are still some unexplained anomalies that may be due to experimental error. Most importantly, the calculation of the free-stream velocity, and consequently Reynold number, may not have been accurate. The free-stream velocity was determined using the dynamic pressure reading that was assumed to be in the free-stream. It is possible that there was some kind of turbulence that effected this reading because of the nature of man-made wind. Another source of error was the angle of attack setting. The divisions on the dial were very small and difficult to see. Another source of error could be in the readings themselves. The pressure readings were read off a pressure transducer and input by hand into Excel. It is entirely possible that some of these readings could have been entered incorrectly or mislabeled. However, any major errors would have been apparent in the resulting plots, as seen in the lift coefficient vs angle of attack figure. A final source of error could be in the pressure transducer. There is concern that the pressure transducer was either calibrated incorrectly or not calibrated at all in-between tests. Also, it was fed pressure by small tubes connected to each tap on the airfoil; it is possible that there were leaks in these tubes which could have affected the pressure readings.

In conclusion, this experiment performed as expected. Discounting stall, the experimental results proved to be very similar to those of thin-airfoil theory. It was also found that at low Reynolds numbers, the lift coefficient was not drastically affected by a change in Reynolds number. The moment coefficient was found to remain around zero until reaching the maximum angle.

Lift is one of the most important and governing forces acting on a body moving in a fluid. Being able to fully study and understand this phenomenon can greatly increase performance, economic and environmental aspects for the aircrafts of the future. 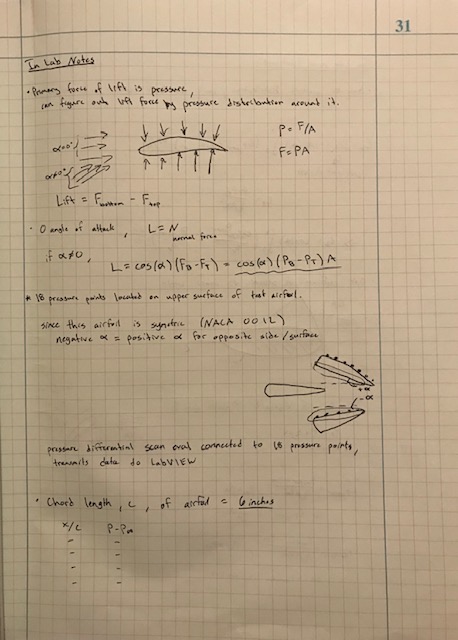 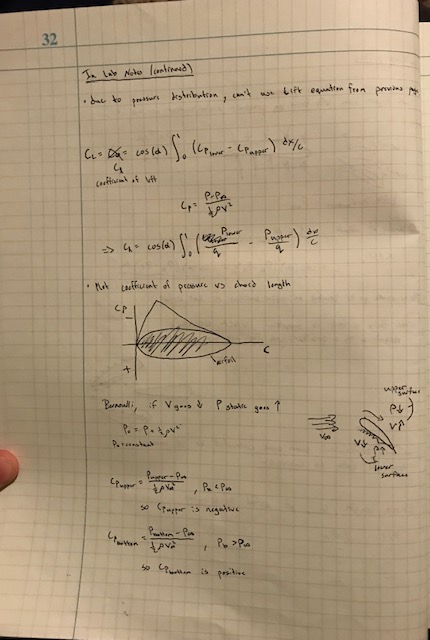