Background: Anterior shoulder dislocations and subluxations are common in young athletes. The mechanism for the first or primary shoulder dislocation may involve a collision or a fall typically with the arm in an abducted and externally rotated position. Contact sports, such as rugby and ice hockey, provide frequent opportunities for this injury to occur. Shoulder dislocations can occur after much less trauma in patients with previous dislocations. Despite a period of immobilization and rehabilitation following traumatic dislocations, recurrent instability often results and can lead to significant disability. To minimize the need for surgical intervention, effective physical rehabilitation programs are needed.

Purpose: The aim of this study was to design a physical rehabilitation program using elastic band and resistive exercise to improve joint strength and range of motion in individuals diagnosed with a first-time shoulder dislocation.

Method: Twelve physically active males with a first-time acute shoulder dislocation were asked to volunteer. Participants began a physical rehabilitation program two weeks after the shoulder dislocation, which was confirmed by a referring physician. The rehabilitation program was 6 weeks in duration and required the participants to engage in progressive resistive loads/duration using elastic bands and weights five days per week. Pretest and posttest measures included shoulder strength and range of motion. All outcome measures were compared between the injured and uninjured shoulder, which served as the control condition in this study.

Physically active males who presented at the Mansoura university hospitals and the teaching hospital in Damietta, Egypt with acute anterior dislocation shoulder injury between September 2012 and February 2015 were randomly recruited as research participants. The magnetic resonance imaging (MRI) were conducted to determine the injury grade for 17 athletes. We excluded patients with recurrent dislocation shoulder or had a history of injury in the same joint. Twelve physically active males (age 18.6 Â± 1.32y, mass 74.48Â±3.22 Kg, height 178.4Â±3.21 cm and competitive experience 9.6Â±2.67 y) with a first-time acute shoulder dislocation were considered as research participants. The participants began a physical rehabilitation program two weeks after the shoulder dislocation, which was confirmed by a referring physician.

The external and internal rotation exercises have been chosen for the first stage which aimed to control the pain and inflammation caused by the dislocation and included seventeen flexibility and isotonic strength exercise with 12-15 1RM intensity were performed for the scapulothoracic muscles particularly, the rotator cuff muscles. (Figure 1).

The second stage aimed to restore higher level of muscle strength. The intensity of exercises was five sets with 8-10 1RM, was tested according to the healthy arm. Thirty-two exercises in particular, Deltoid M., Trapezius M. and serratus anterior M. exercises in this stage were performed widely in the horizontal and diagonal axes. Moreover, the exercises were chosen to enhance the range of motion (ROM) and muscles strength between 90-150Â° vertically, horizontally, and diagonally (Figure 2). The third stage, after the twenty rehabilitation sessions. The endurance, peromitric, and strength exercises were consisted of five sets of 8-10 repetitions using variable resistance: one at 75% of the 10 RM, and two at 95% of the 8 RM. 27 extremity weights rehabilitation exercises performed to reach 190 - 200Â° ROM and the equally health arms strength as well. (Figure 5,6). The Thera-Band resistance bands exercises were hired during the six weeks especially the four colors (red, blue, black, silver, gold). The red and blue bands were used in the first stage and the black and silver used in second stage, addition, the gold has been performed in the third stage. Furthermore, all the exercises performed by stretching the band between 75 - 100 %. knowing that, the weight of stretching in Thera-Band between 75-100% is (red 3.3-3.9kg, blue 5.9-7.1kg, black 8.1-9.7, silver 11.1-13.2kg, and gold 18.1-21.6kg). (BiÇer, et al., 2015;Andersen, et al., 2010)

The paired t-test was used to compare the collected data before performing the exercise protocol (Pre-test) and those which obtained after 6-weeks physical rehabilitation period (Post-test). Whether the differences between the samples were significant at p < 0.05 level and p < 0.01. All the analyses were performed by using SPSS 19 software for Windows 7 (SPSS Inc. Chicago, IL, USA). Additionally, all values within the text and table are observed as standard deviation and mean (mean Â± SD).

The rehabilitation program was comprised four testing sessions. The Pre-test (PRT) section was conducted after two weeks of the injury and before the beginning of the rehabilitation program. after two rehabilitative weeks, the second week tracking test (SWT) was realized. while the Fourth week tracking test was realized after the fourth rehabilitative week (FWT). Moreover, after a resting of 6 weeks, the Post-test was conducted in the Faculty of Sports Education, Damietta University, Egypt. Additionally, all the injured athletes were right handed injured and in each testing test, the healthy arms measurements were recorded. Continuously, the test results for the injured arm had been compared with the healthy arm for each person. Before reporting the force measurement all the participants were informed with the test procedures for both arms. Four basics Isotonic force measurements were reported by Isometric Dynamometer device (Biodex Isokinetic Dynamometer). These force measurements were conducted for muscles around shoulder girdle in the 90 Deg. vertically and horizontally. The force variables were flexion force (F.F), adduction force (AD.F), Abduction force (AB.F), and hyper extension force (HB.F). Whilst, the participants were asked to perform the maximum flexibility for the shoulder joint without feeling pain. Addition, the range of motion variables were obtained by Goniometer for flexion range of motion (F.ROM), abduction (AB.ROM), and hyper extension (HB.ROM).

Table 1. Improvement of the measurement among the rehabilitation stages.

The current study aimed to design a rehabilitation program passed on the elastic and weights exercises. Over the past decades, we have seen a huge boost in the rehabilitation of shoulder dislocation injuries. These injuries because of the anatomical structure of the glenohumeral joint which allow to wide movement of the joint. Therefore, derives its extensive movement at the expense of its consistency and coherence. More than 50% of acute anterior dislocations can reoccur, especially in young athletes. The aim of the physical rehabilitation is avoiding the recurrent dislocation and using an elastic band and resistive exercise to improve joint strength in individuals diagnosed with a first-time shoulder dislocation.

The current study results shown that, there were weakness of the shoulder muscles in the pre-test measurements of Flexion, adduction, abduction force as a result of ache, swelling, and inflammation. Nevertheless, the hyperextension motion measurements were reported better than the other measurement in the pretest. The mechanism of the anterior dislocation occurred forwardly and downward. Out of the ordinary, that has affected adversely on the forward movement of the arm. (Turkel, et al., 1981) 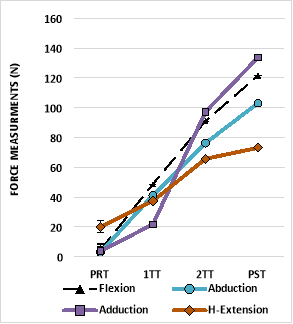 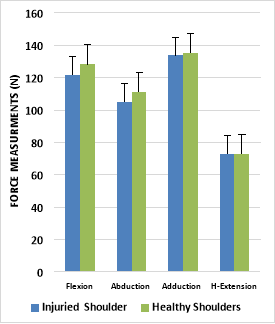 The return to activity after 2-3 weeks is available for athletes with a high risk of recurrence dislocation. which expected to arthroscopic remain and return to activity after 6-month surgical stabilization (Watson, et al., 2016). Many factors have been related to rehabilitate shoulder dislocation. Thus, the current study has been assumed that 6 weeks' elastic resistant with weight exercise had great benefit for the shoulder muscles especially, the rotator cuff muscles. Recently, the popularity of elastic bands has increased because of their low prices, flexibility, adaptability, versatility, and simplicity. (Andersen, et al., 2010) (Jakobsena, et al., 2013). The incorporation between nautilus machine and the elastic bands exercises have been used to promote joint range of motion and muscles strength in training and rehabilitation purposes as well. thus, the elastic resistant exercise has been improved the influences of the strength-shorting cycle. Addition to, it has been used as technique to produce the speed eccentric contraction. (Stevenson, et al., 2010). 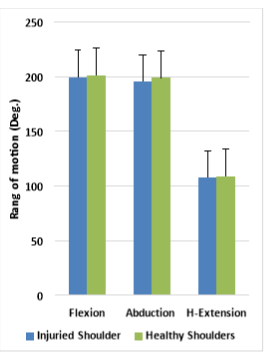 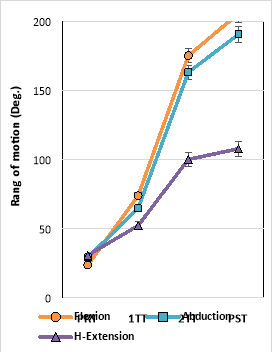 It is obviously seen in table 1. and Figure 2, 3. there are a considerable significant different between the pretests and the posttests of the injured shoulders. Addition, it is seeming to be similar with the healthy shoulder after the 6wks. physical rehabilitation program. The same resulted reported in previous study conducted on young volley ball players and have improved their muscle power, muscle strength and ball speed. (Mascarin, et al., 2016). Nevertheless, the elastic resistant and free weight exercise improve the dynamic stabilization and joint stability. (Andersen, et al., 2010) (Camci, et al., 2013). Addition, the exercise rehabilitation program for the unstable shoulder must include a joint position sensibility and dynamic stabilization to supporting the functional stability of the shoulder joint. The dynamic stabilization is promoted the co-activation of the force couples about the glenohumeral joint to exceptional position of the humerus hear in the center of glenoid. (Naughton, et al., 2005). Previous studies have demonstrated same levels of muscle activation for using elastic resistance compared with free weights display similar or even greater levels of muscle activity for some muscles during an exercise. (Camci, et al., 2013) (Andersen, et al., 2010). In contrast, used parallel with free weight (Aboodardaa, et al., 2013). Other studies have shown high levels of muscles activation compared with weight machine (Brandt, et al., 2013). But all the modalities recommended to use the elastic band with the weights. Moreover, using elastic band with weights appear to be equally in muscle activity as traditional using isoinertial resistance (Jakobsena, et al., 2013). Finally, The physical rehabilitation program proposed in this study was effective at improving strength and range of motion in the injured shoulder as evidenced by the similarity in posttest values between the injured and uninjured shoulder. These results are encouraging and suggest the physical rehabilitation program proposed in this study may help reduce the need for surgical intervention in healthy young males who experience a primary shoulder dislocation.

Karatsolis, K. & Athanasopoulos, S., 2006. The role of exercise in the conservative treatment of the anterior shoulder dislocation. Journal of Bodywork and Movement Therapies, Volume 10, pp. 211-219.