Milk powder production is a very simple process. But now it become on a large scale. It involves the gentle removal of water at the lowest possible cost under hard health conditions. But while this process we want to retain all the desirable natural properties of the milk such as color, flavor, solubility, nutritional value.

There are two types of milk.

During milk powder production, this water is removed by boiling the milk under reduced pressure and low temperature. This special process is known as evaporation. The result is concentrated milk. Then it sprayed in a fine mist into hot air to remove further moisture and then give a powder.

Demand of powdered milk is being increased according to the rate of the population growth of Sri Lanka. The calculated requirement of milk powder in 2015 is 91156730.43kg, shown in table 1. 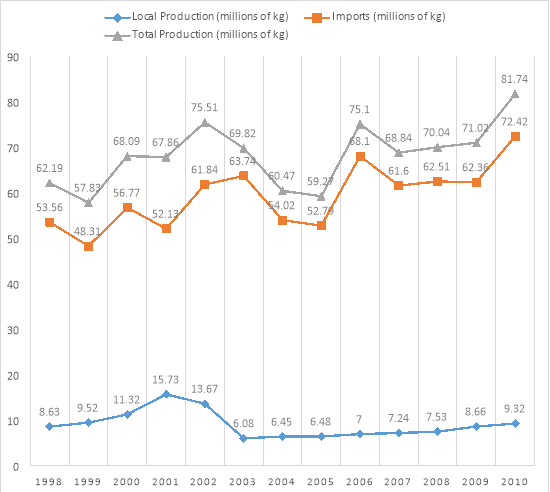 Figure 2 – Forecasting of Production and Imports of milk powder 2015 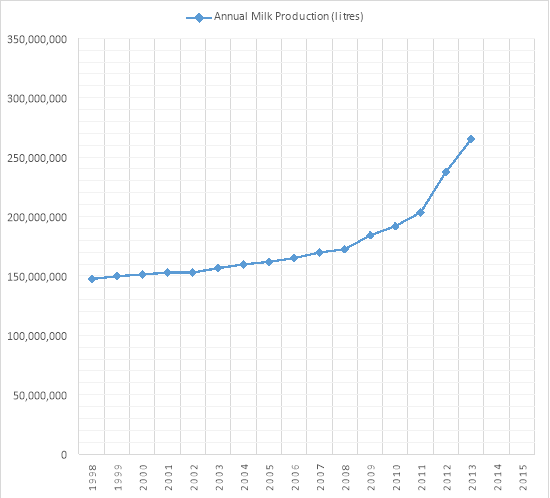 Estimated fresh milk production of year 2015 will be 309.28 million litres, shown in figure 3. If all fresh milk converted into milk powder, 37.11 million kilograms of milk powder will be produced.

There are five main unit operations.

This is the first step of milk powder production. Milk powder manufacturing is starts with taking the raw milk to dairy factory. Then pasteurize them. There is a machine called centrifugal cream separator. It use to separate raw milk into skim milk and whole milk.

The next step in the milk powder process is preheating. In this process standardized milk is heated to temperatures between 75 C and 120 C. this temperature is held for a specified time from few seconds to several minutes. Like 72C foe 15s.

These indirect heaters are generally used waste heat from other parts of the process as an energy saving measure.

In this step the preheated milk is concentrated in stages.

After evaporation we can produce:

This is achieved by boiling the milk under a vacuum. The temperature is below 72C in a falling film on the inside of vertical tubes. And water is removed as vapour.

This vapour, which may be thermally or mechanically compressed, is next used to heat the milk which in the next effect of the evaporator. It may be operated at a lower pressure and temperature than the preceding effect.

Modern plants may have more effects for maximum energy efficiency. More than 85% of the water in the milk is removed in the evaporator.

Evaporators are extremely noisy. Reason is the large quantity of water vapour travelling at very high speeds inside its tubes.

Spray drying is the step of atomizing the milk concentrate from the evaporator next into fine droplets. This is done inside a large chamber. There is a flow of hot air in the chamber. The temperature of this air is up to 200C. This flow of air is holed by using either a spinning disk atomizer or a series of high pressure nozzles.

Much of the remaining water is evaporated in the drying chamber. It leave fine powder of around 6% moisture content with a mean particle size (<0.1mm diameter).

But milk powder is protection from moisture, oxygen, light and heat. It is needed in order to maintain their quality and shelf life. Milk powders quickly take up moisture from air and leading to a rapid loss of quality and caking or lumping. The fat in whole milk powder can react with oxygen in the air to give a off flavor. It happens at especially high storage temperatures. (>30C)

Milk powder is packed into either plastic bags or bulk bins. Whole milk powders are often packed under nitrogen gas to protect the product from oxidation and also maintain their flavor and extend their keeping quality. The packaging is chosen to provide a barrier to moisture is air, oxygen and light.